The last time I frequented these forums I ended up with a 42" Panasonic G10 Plasma, Sony DA2400ES receiver, Q Acoustics floor standers for L, R, + surround, a QA centre and a BK XLS200 sub. It's all still going strong some 11-12 years later however a long overdue room layout change where I finally get the TV out of a small corner means I need to swap out the surround speakers.

Due to the typical UK comprimised room layout and need for a living room friendly to a young family, the couch will be up against the wall, I may get 6" rear space but couch is mostly up to the wall. The LHS is open to the rest of the room so not suitable for a left surround except at ceiling height (very tall stand ???... take place of potential sub 2) and any right surround would be tight in the corner fighting with curtain overhang. Given the layout, I feel sticking with 5.1 / 5.2 is the best option, potentially with some front atmos height speakers in a later upgrade.

The Alteco C-1 in downfire mounted on the back wall seems like an option, however as I read the manual it suggest using the C-1 as rears in a 5.1 setup. Does the really mean connecting to L+R surround and mounting at the rear or using the L+R surround rear channels usually as part of 7.1? Does anyone have experience of using these as 5.1 surround mounted above a close couch on a back wall?

An alternative would be the Cambridge Minx Min12 / Min22 mounted on the back wall angled in somewhere 95-100 deg wrt to main listening position however I'm not sure how effective these much smaller speakers would be, and in future may upgrade the front L+R + center so looking for something that can hold it's own with ~£1000 of front speakers.

Q Acoustics 3010i could be a little large to mount in the corner.

Anything else I should consider? Other advice or experience?

Other:
AMP will likely be upgraded if/when it is worth it for the HDMI switching + new features / Atmos. Budget ~£1k
May get a second sub, either a matching BK XLS200, or the 300/400 if there isn't a huge imbalance and a new amp has dual outputs. Will ask for some advice on positioning.

About me:
Not an audiophile / videophile by any stretch.
Aiming for something better than a soundbar or a big box store package.
I've been happy enough with the G10 in a corner and 5.1 existing setup for the last 10 years, looking to at least keep current performance and if there is an easy path to a step up to a much more immersive experience without taking over the room then I'm all for that.

Appreciate any response advice.... even if it's scrap the lot and start again! 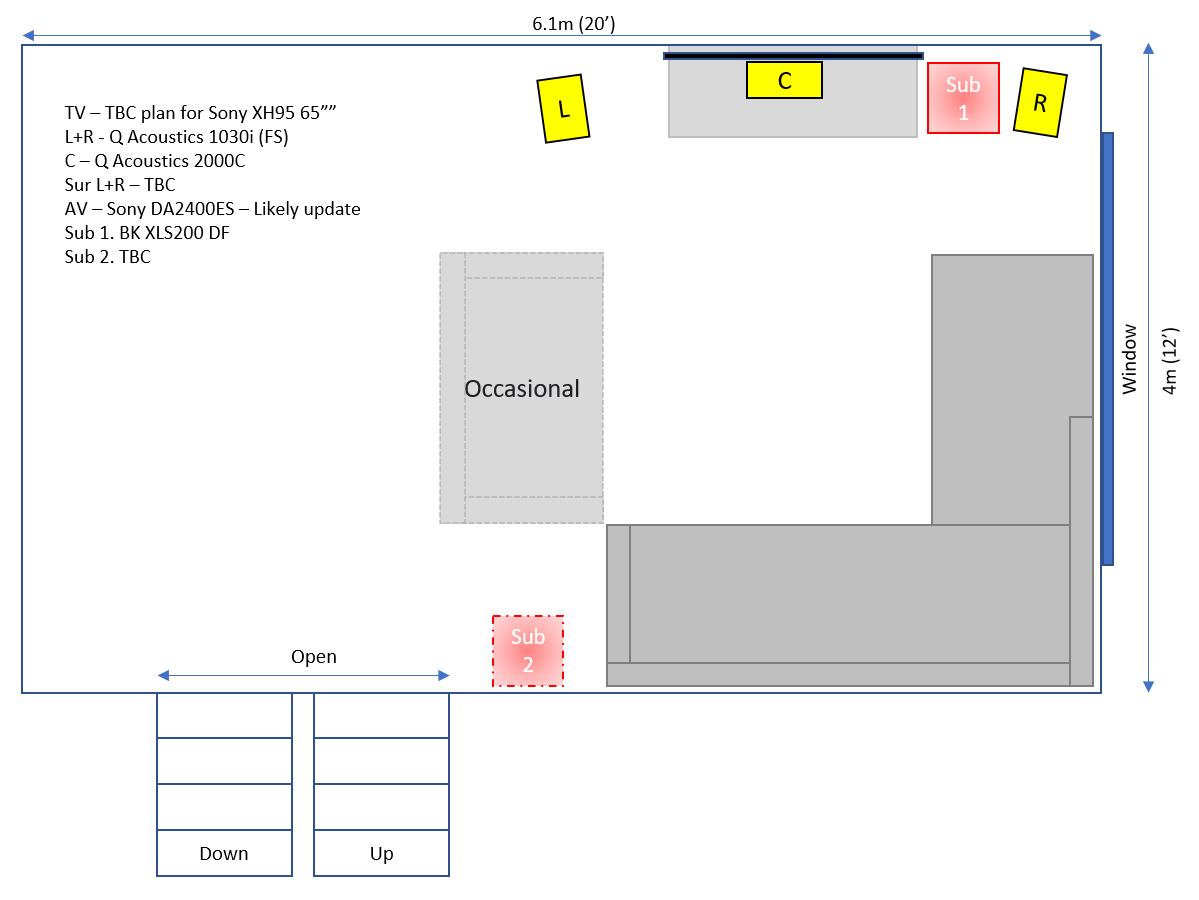 Yes that is correct you would connect them to surround l/r not surround back l/r! They aren`t back speakers, but you don`t have much of choice with the placement.

You have quite tricky situation similar to others who has couch against rear wall. Ideally you would mount the surround speakers higher to get more distance to listeners cause it´s really not ideal to have direct radiating speakes shouting close to ears, annoying if anything. If you mount them them about 2feet from seated ear height which would be quite ideal for 5.1, but if you go with atmos later then they are bit too high as you want height separation with the front height channels vs. surrounds. The problem is you don´t want them too low cause then they would be too close and so darn directional. Perhaps good compromise would be something like 1feet higher from seated ear height. Altecos can be mounted side ways too as i just posted picture in some other thread. I have owned the older CA Minx Min 10s as surrounds in similar scenario as you have. They are nice for the size, but still sound thin so if possible get the Altecos. They are available in full white so they blend nicely if you have white walls. Then get d-lite cable trunking to hide wires cleanly.

Summer / end of summer is usually best time to consider new av-receiver assuming there is new models announced August timeline, that means the 2020 models will go on sale. Sadly there is this hdmi 2.1 bug and Denon/Marantz is offering the free little box as solution. Is that something you can have in your av-cabinet as you will need it when using the latest game consoles. 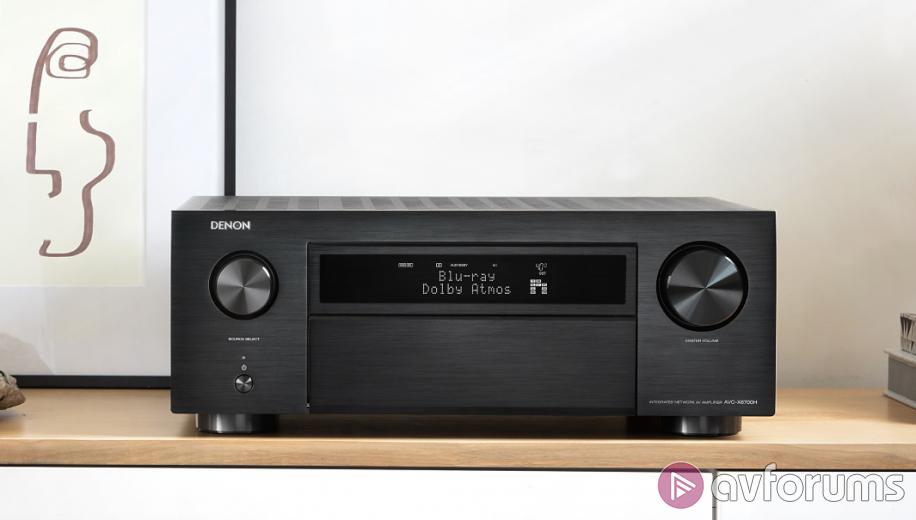 I would assume you will upgrade tv to 4K, new receiver with 4K when you want Atmos and/or buy the new Xbox Serie X / PS5. So perhaps the receiver (Sony) will do now, even if you upgrade speakers first. Your receiver supports the higher quality HD lossless sound formats Dolby True HD and DTS HD MA. So you should be looking bluray player to get the highest quality sound out. Perhaps that gaming console which comes with bluray player isn´t such a bad idea sooner.


Looking the subwoofer response (1 or 2 subs) with REW program the currect place doesn´t look ideal as there is some big drop just below 30hz in your current seating positions. Ideally you would either sit in the middle width wise on couch, exactly where the sub2 is pictured so moving the couch toward left as much as possible and naturally tv and speakers would go more toward center aswell. This would be ideal as if you have listener in the best spot in couch with that divine for legs he is directly in corner where all the bass tend to build up making everything sound muddy. Add the fact that you have tower speaker in very close to side wall it would be better to have more space for them. That is why you don`t want to sit against rear wall or definitely not in corner. However if you can´t move couch i would move the sub to left side of your left main speaker which would be roughly middle width wise. But you lose boundary support and that room is not small with the opening to stairway also meaning that i would consider buying largest sub you can get away (wife). From BK P12-PR (the latest model with passive radiator) or better yet BK Monolith FF or DF which is priced same (cabinet has different dimension depending driver orientation).
The pictured arrangement with dual sub doesn`t look ideal. That 2nd sub at middle of rear wall should be moved to similar spot in the left rear wall to bring that low end up, so diagonally opposite position to front sub. Probably not the most ideal scenario if asking wife and very long wire needed etc. Also you still don`t get the depth/weight of larger sub with the tiny XLS200 which probably is good to 30hz or so and near it`s limits.

Swapping the order of room so tv would go to short wall is something i thought. It can´t go to that one with window on right side, so the left side would be only way. The couch wouldn`t be placed too far away cause you have tiny tv and if you buy new 65" 4K tv you should sit as close as 5.4-8.1 feet to see the extra detail of 4K. Usually the mid point of room (dead center width/length) is bad spot so there is lot to consider if wanting to really optimize things. And when you finally show the idea to wife she might have very different idea what is possible.

Thanks for the detailed reply, very useful.

The room layout is somewhat fixed, the wall opposite the window has a door in the middle and the end near the stairs is the 'kids zone' right now but I have some flex in right hand square.

I've actually had a pair of white Alteco C-1's for a few days, though I didn't open the box until today, Decoration was complete late Monday with carpets fitted yesterday so was keeping them boxed. They were somewhat an impulse buy after some reading, however then I found the Minx, was unclear on the C-1 installation for couch to wall and the doubt set in.

Wife is fairly tolerant, already happy that we are getting new and bigger TV, wants the 65" over 55". Chose the TV cabinet with doors (has reasonable open space for a receiver) rather than the open glass spaghetti monster we've been using and estatic I've ripped out the faux fireplace, fully decorated, replaced the carpets and ordered her choice of sofas. Plus we're having two stair lifts installed so her parents can visit more often and stay over, at least one of which will need to park in the lounge so man points high right now.

That the rear floor standers are being replaced with white wall mounted units on a 'not quite white' wall is also much approved. We did look positions for the C1 on the wall and the main criticism for the horizontal approch was the badge doesn't rotate though we got past that. Assuming a mount at 1-2 feet above the ear, which orientation would give the best surround effect for the back wall seating positions?

Looking at the sub I can see that sub 2 position has a huge null making no low base. Assuming I was using the software correctly. Hadn't seen the software before so thanks for the reference. Seems the mid position on the long wall is a well balanced option, 20-55 Hz is pretty static throughout the main seating positions. As it happens, this is the exact postition the Sub has been in for the last 10 years with similar seating though the TV and center and R front were originally pushed right into the corner due to the faux fireplace which also limited the TV size. 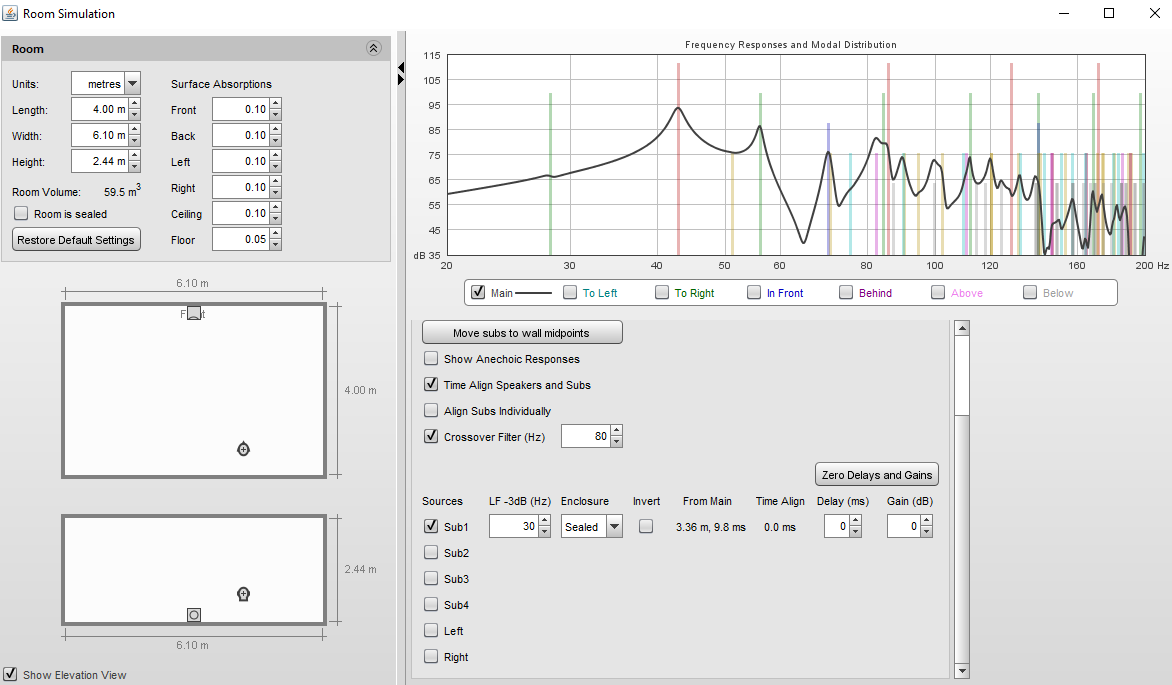 To get the sub in this position would be a challenge with the floor standers as the 'occasional' sofa will be rotated and pushed back to the wall where the mid position sub and left front speaker are when not in use ~90% of the time. I can fit either one, but both won't work easily.

I think the solution may be to move on from my trusty floor standers and use a pair of mid tier bookshelf speakers so execute my from speaker change now. This will allow good separation spacing while keeping the floor area free for the sub. Wife also likes the idea of white, wall mounted speakers, perhaps something like the Dali oberon 1, or on wall.

No issues on a larger sub, I think the BK Monolith may be a stretch, but the other 12" subs in ~ 400mm sq. cabinets would be fine. Question is, how to get this to support the L+R book shelf speakers in audio direct. I'm not sure of the Sony can be used for a high level out in addition to the sub channel, certainly don't get anything to the sub with audion direct.

So I think the plan of action is.

As you say, for now the Sony amp is still capable at 5.1 so I can just use optical for TV switched 4k content and push everything 1080p or less through the receiver.
You must log in or register to reply here.

Front and surround options in a 4.1 setup