As SWMBO was out for the day I decided to get out all of my Hifi gear and try a few combinations to see what sounded the best. Thought the "AVForums collective" on here might like to hear my findings (sorry for the long post, I will understand if you drop off half way through!).

Big caveat - this was based on subjective judgement using my ears/brain, in a far from ideal room and using a moderate quality source. But this represents how I listen to music most of the time.

Warning - I will use descriptions that do not necessarily convey acoustically objective functions but hopefully you will get the idea of the difference I heard.

The systems were a mix of passive and active but presented similar age and price points. 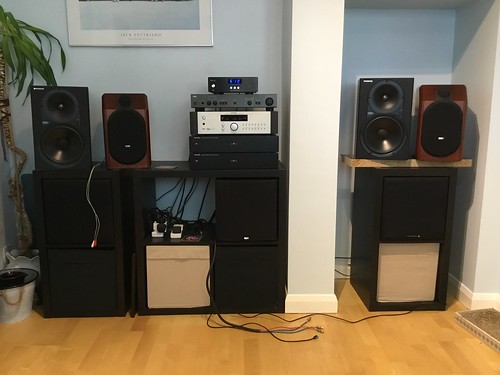 This was to see if my new actives were significantly better that my old setup. The active system had a full but tight bass, clear mid range with good sounds staging and well defined isolation between the instruments/band members and the top end was clear, crisp but not harsh. Unsurprisingly, the B&Ws had less bass (8" vs 6") but again was nice and tight, the mids were not as open and the top end less crisp, however it provided a very well rounded sound that was very listenable.

The Actives won then one and is now the baseline for comparison.

I expected this to be close as previously I had compared the Audio GD playing into the Rotel RSP against the Rotel RSP internal DAC and not found a particularly big difference. Anyway we have the Audio GD baseline with good bass extension, clear mids, crisp top end and decent soudstage. Now the Rotel DAC is a generation older and part of a surround preamp (but Audio GD was £400 and Rotel £1000+ when new). The Rotel kept the tight bass but the mids were slightly less clear and the soundstage marginally smaller but the top end was rolled off and therefore not as crisp. Cymbals and consonants on female singers were less prominent.

The Audio GD wins this one.

So the baseline system at the moment has no volume control other than in the spotify app (I prefer to run the app volume at max and adjust with a preamp). So adding the NAD into the equation was of interest. Well, although the NAD is getting on a bit it has lost nothing. The mids were still clear and the soundstage pretty much the same as with the baseline. But the overall sound took on that typical warm and cossetting NAD sound. The bass was more prominent but less controlled and the top end became much smoother with less definition. It still sounded good but not to my liking as I tend to listen to music with fast bass and lots of cymbals.

The "no preamp" system wins and suggests that the system needs as little interference between the DAC and the speakers as possible = passive preamp, maybe.

The Mackies have been set up so far with the following controls - 37hz (47and 80 available), Mid room B (wall and free air available), No treble lift (+2db and -2db available). This seems to be a good setting for use on their own. Given I was happy with the bass these put out adding a sub would be just for the final low octave. The Wharfedales have a spec of 35hz lowest frequency so these were not tested. The B&W ASWs can be set for a 20hz low end and are of a closed box design so are more suited for music, these were set to - Low Freq. IN, Bass Extension A (lowest), EQ A (corner), Cross Over approx 40hz.

With the Sub in the loop and the volume adjusted this gave that final bit of bass reach and really made the system complete. The volume of the sub is pretty low and is only just audible when playing 20/30hz tones but it fills out the lower register. In fact although it does give a little extra depth I could be happy with just the Mackies as the bass is so good.

Final system is therefore Chromecast Audio playing through the Audio GD Dac via a Y splitter to the Mackie actives and the B&W sub.

This does leave me with a pile of Hifi gear that I now have to decide what to do with and a hunt for a passive preamp that minimally affects the DAC output into the Mackies.

I guess the only test in hindsight would be for CCA > AGD > RRB > BW to see if the direct Audio GD DAC route (no preamp) produced similar results to the Mackies with the passive system but this would not give the tight/deep bass that the active system gave. I may also play around in the future with setting the Mackies to 47hz roll off and upping the sub crossover but that's for another day.

Sorry again for the long post but I found the exercise interesting and has significantly simplified my system.

Nice write up Ugg.
Having recently done comparison testing of my own I know how tricky this can be to maintain the previous sound in your head as you switch between set-ups.
Your disciplined approach surely helped.

Good luck finding the passive pre.
I remember looking at this once:
Tisbury Audio - Mini Passive Preamplifier
I know nothing more about it than you can read but I remember loving the attenuation and output control selectors on the base of the unit
SRM Azure / Rega Planar 3 - Rega Apollo - Chromecast Audio -> Rega Brio -> Monitor Silver 100 - BeyerDynamic DT880Pro

@Apollo83 thanks for the reply.

I managed to get one of these for £50 open box so will see how it goes.

This will match my speakers better with the XLR jacks and I can also turn on/off the sub and main speakers separately and also mute everything. I have "volume" controls on the back of the speakers so even though it does not have the Tisbury bottom switches I can balance it with these. It comes with a traditional pot and also a ladder style attenuator so can play around with both. Also has the benefit of a basic headphone amp if I want to plug it in and use that (this needs power obviously) and can take two inputs with different volumes.

The great thing about passive is that cheap doesn't have to mean nasty.
That SM Pro looks like an audio desk type control and the XLR out is good for your actives without adaptors.
The only thing I'd want extra is a remote with volume, mute and source selector (Because I am too lazy to get up and walk over)
With the increase in active speakers you'd think a simple high quality line switch/pot with remote would be offered by every major audio brand... 100 quid should get you good quality build plus room for margin.

Anyway let us know if it does the job of control without colour in your now thoroughly modern single digital source active speaker set-up!

Had a quick play this morning and all look fine. Didn't even plug in the mains cable so no lights but definitely passive.

The passive Preamp does not seem to affect the sound even though I am using the AUX input on RCA's and that has a standard pot, ordered some Neutrik plugs (XLR and RCA) and will be ordering some Mogami 2549 cable this week to make up some patch cables, I can then use the "stereo" input which has a ladder style attenuator (12 position). Will see if this has any effect that is audible.