Hi guys, and welcome to my little hideaway.

I first started building my AV collection around 8 years ago, back in 2000. This consisted of a brand new Sony DVP-S300, which at the time I thought was incredible! This was twinned with somewhat lower-tech components made up of a 14" Sharp TV, Playstation, Toshiba VCR and an Aiwa micro system, all housed in a bespoke rack I built for my GSCE resistant materials project (2 marks off an A*, although how it escaped with more than a C average is anyone's guess). 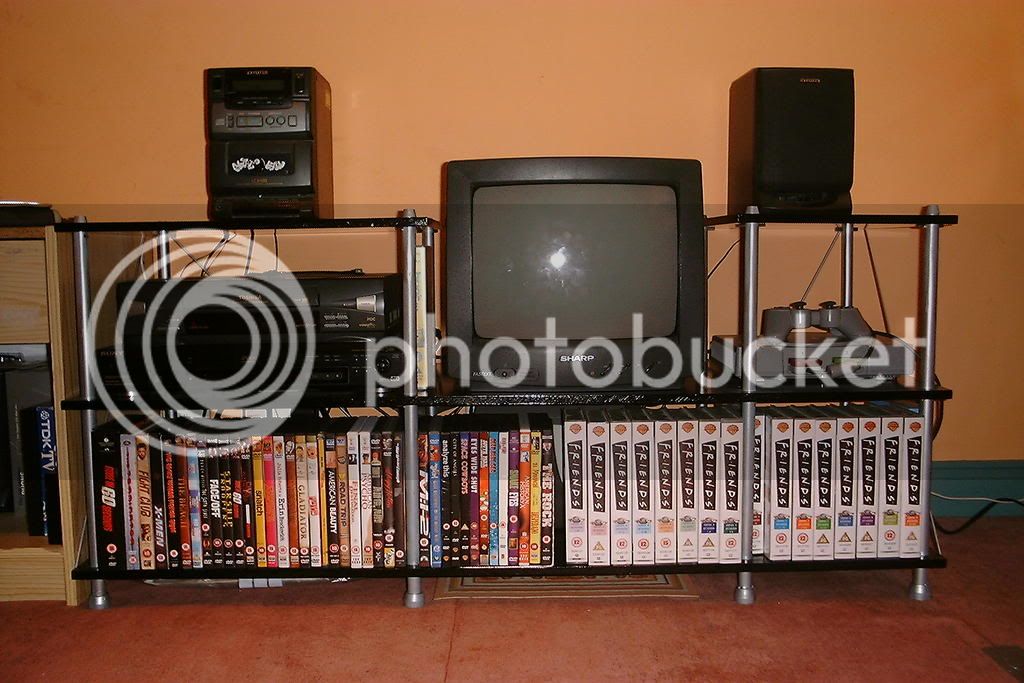 But times they were a changing. With this new DVD player I caught the inevitable upgrade bug, and with it my insatiable thirst for more shiny AV goodies! So over the coming couple of years the 14" TV was replaced by a Sony 24" KV24LS35 widescreen CRT, the Aiwa system made way for a Sony STR-DE875 Receiver, which were wired in to a pair of Tannoy MX2 front speakers, and Yamaha centre (NS-C55) and surrounds (NS-E55). The Tosh VCR was upgraded to a top of the range Panasonic S-VHS model (if VHS was dying a death, I was going out in style!) and the original Playstation took a hop up to the PS2. The first Sony DVD player I bought died after a year and a day and so was replaced with the DVP-NS700 by the same manufacturer. A Denon ADV-M71 all-in-one DVD receiver was purchased as a compact option during the university years. The GCSE project finally laid down to rest in favour of a shop-bought beech entertainment unit. 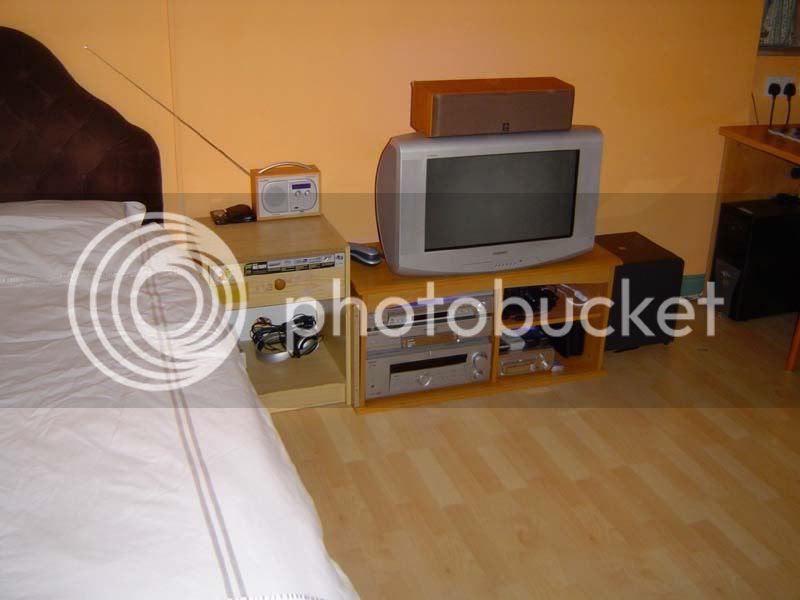 The upgdade path slowed over the coming years, due to university and thus the lack of funds in my AV wallet. I did manage to acquire a second hand KEF PSW-2000 subwoofer whilst at uni though, for the bargain price of £150. It was also during these years I made the smart move of upgrading the AV unit to a John Lewis glass and metal stand capable of holding a 42" display. 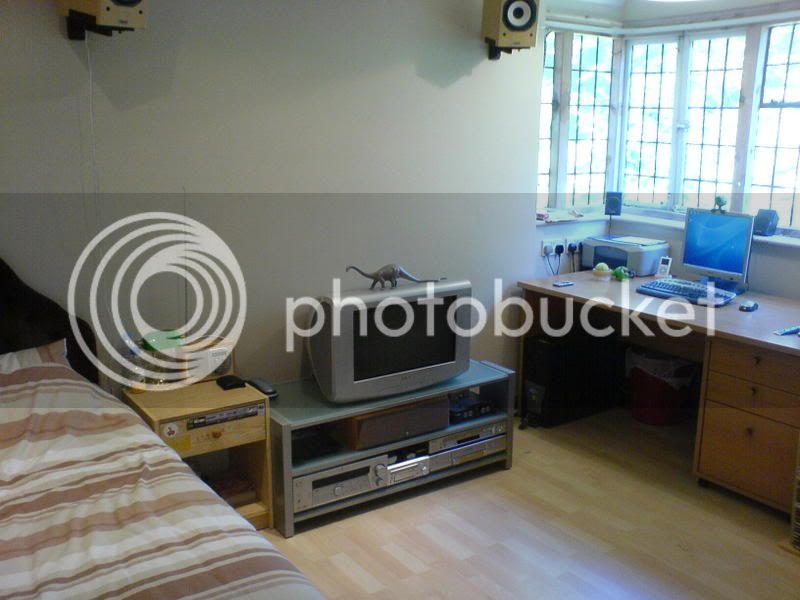 Upgrade time started again in April 2008 with the addition of a 37" Samsung LE37M87BDX 1080p HDTV, twinned with a PS3 for, at the time, purely its Blu-Ray capabilities. I was starting to like this employment malarky! Small gadgets were also added around this time, such as a Logitech Harmony One remote control, a Philips digital photo frame and a 1Tb network hard drive to act as a media server. 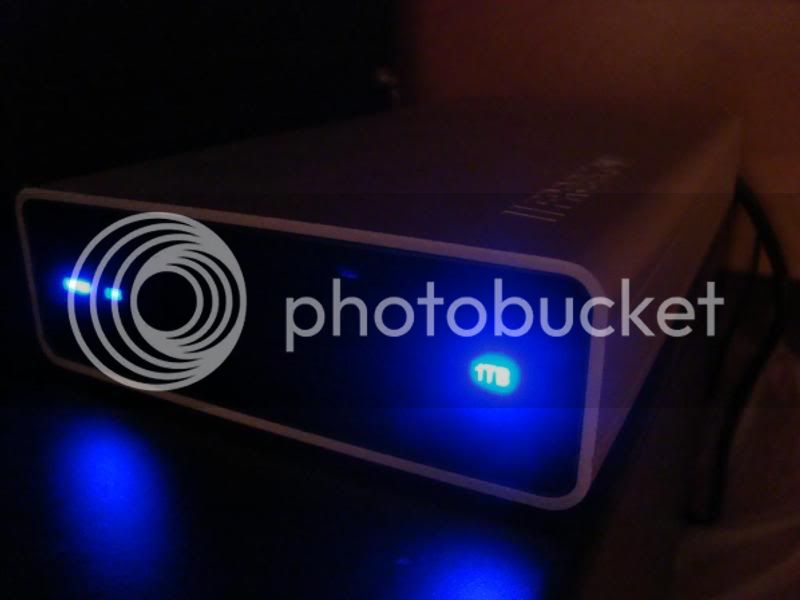 And that folks, brings us up to the present day. Please browse the pictures and post any comments below, thanks! 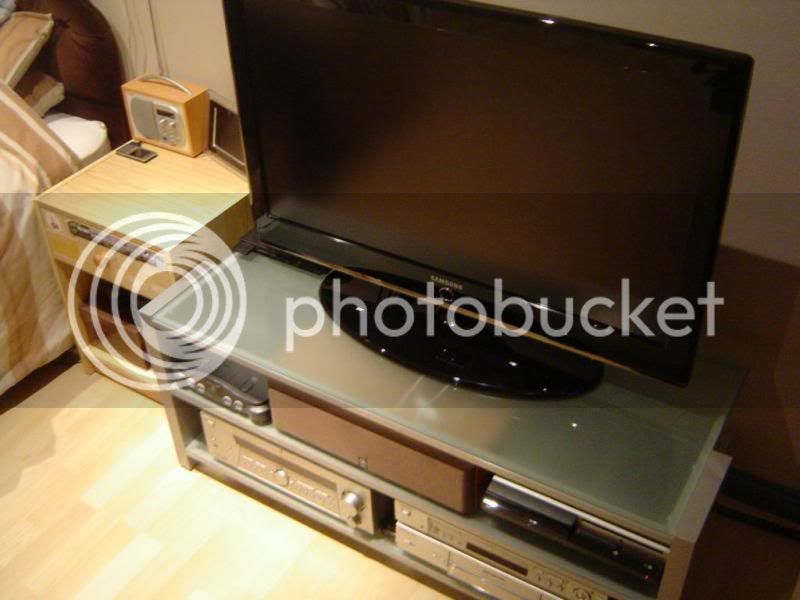 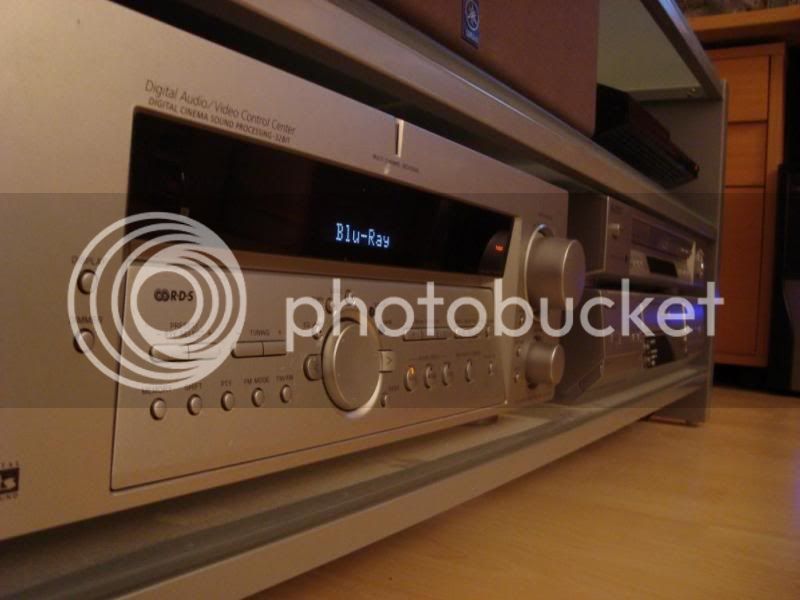 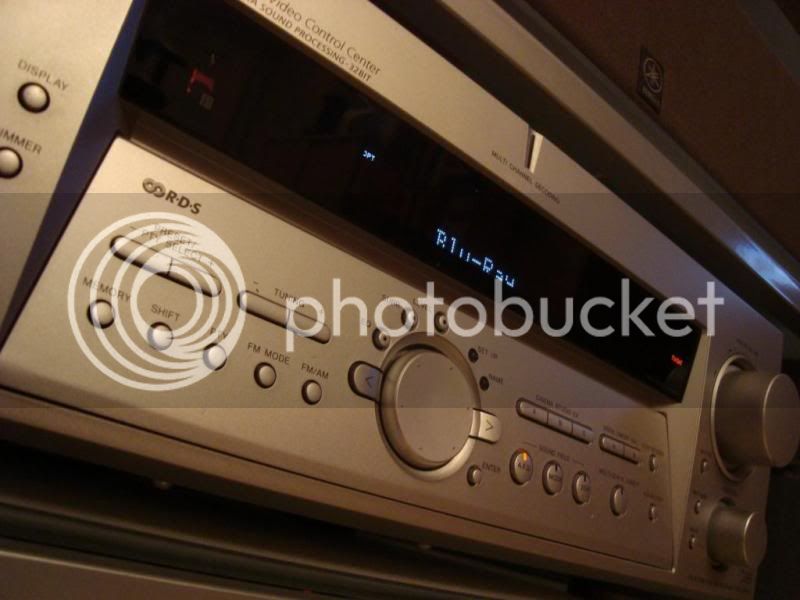 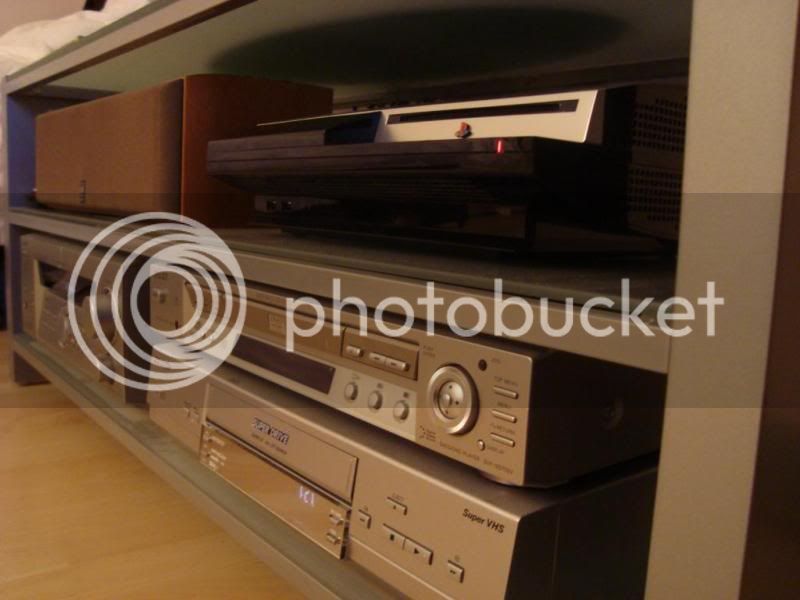 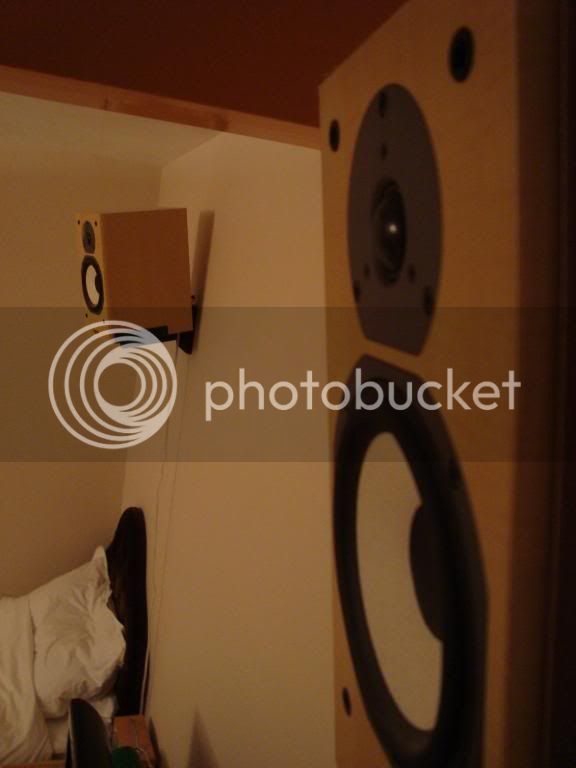 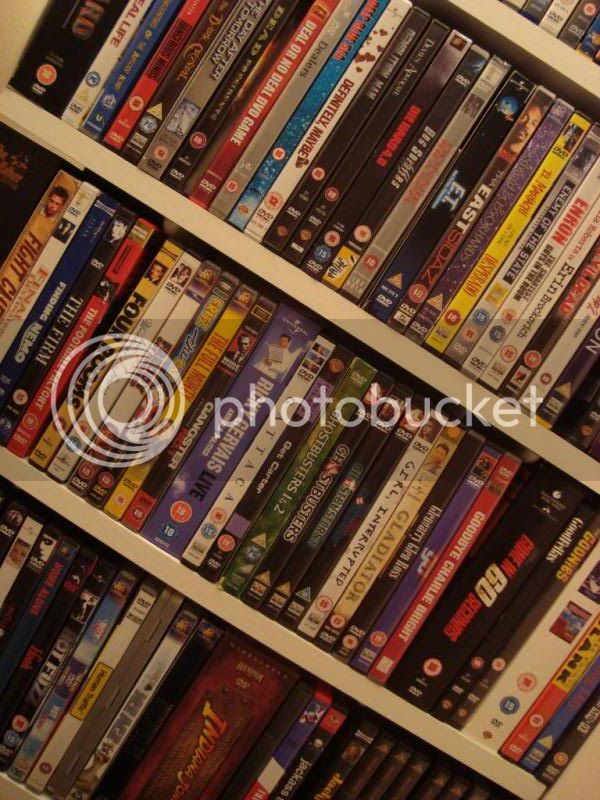 One of the rears 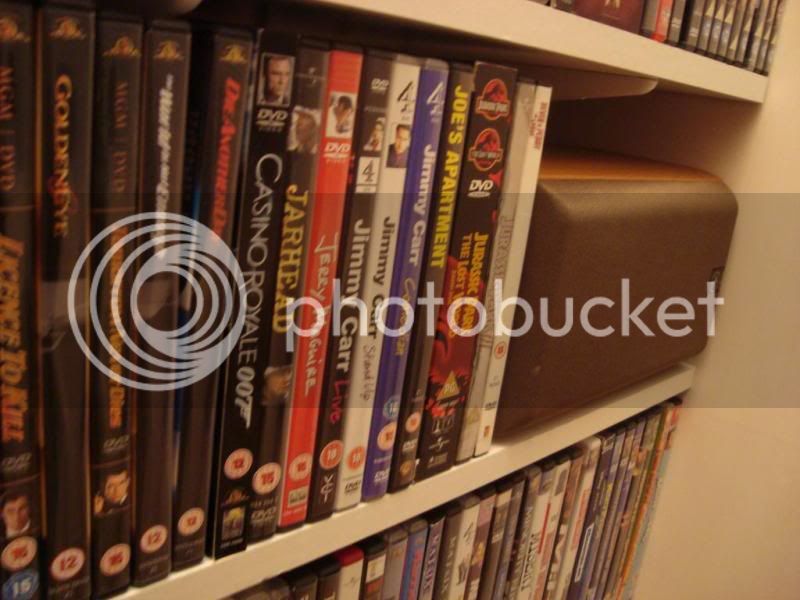 You can't watch a good film without a good coffee! 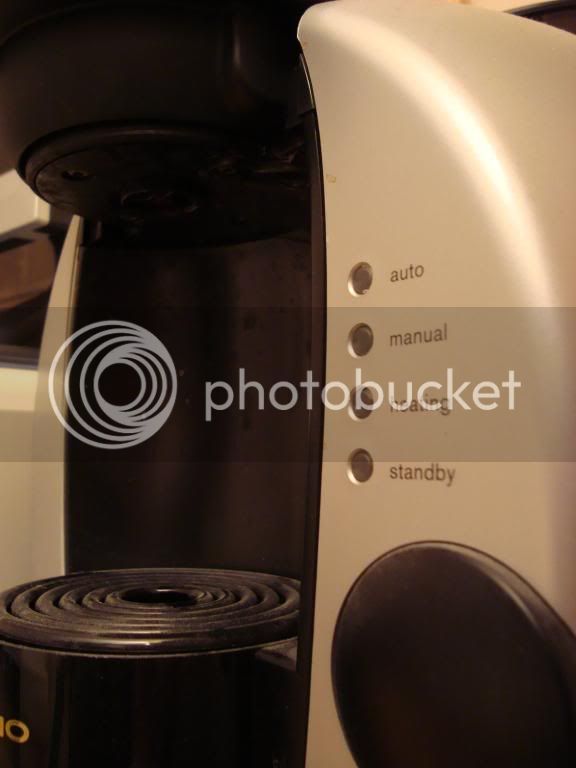 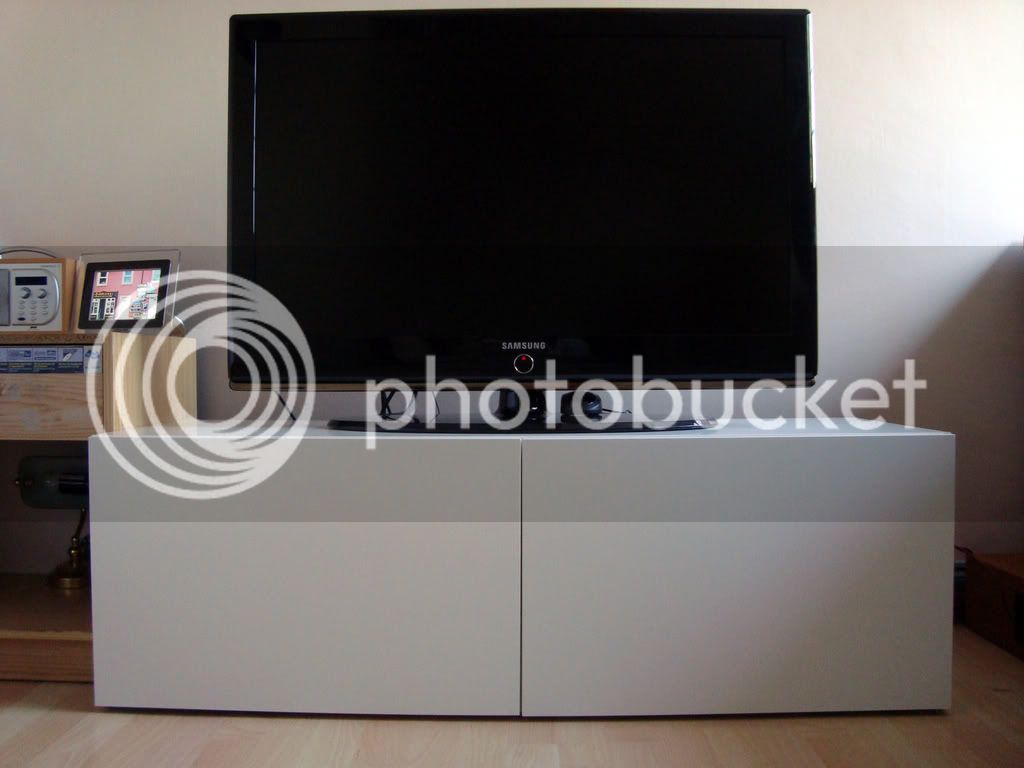 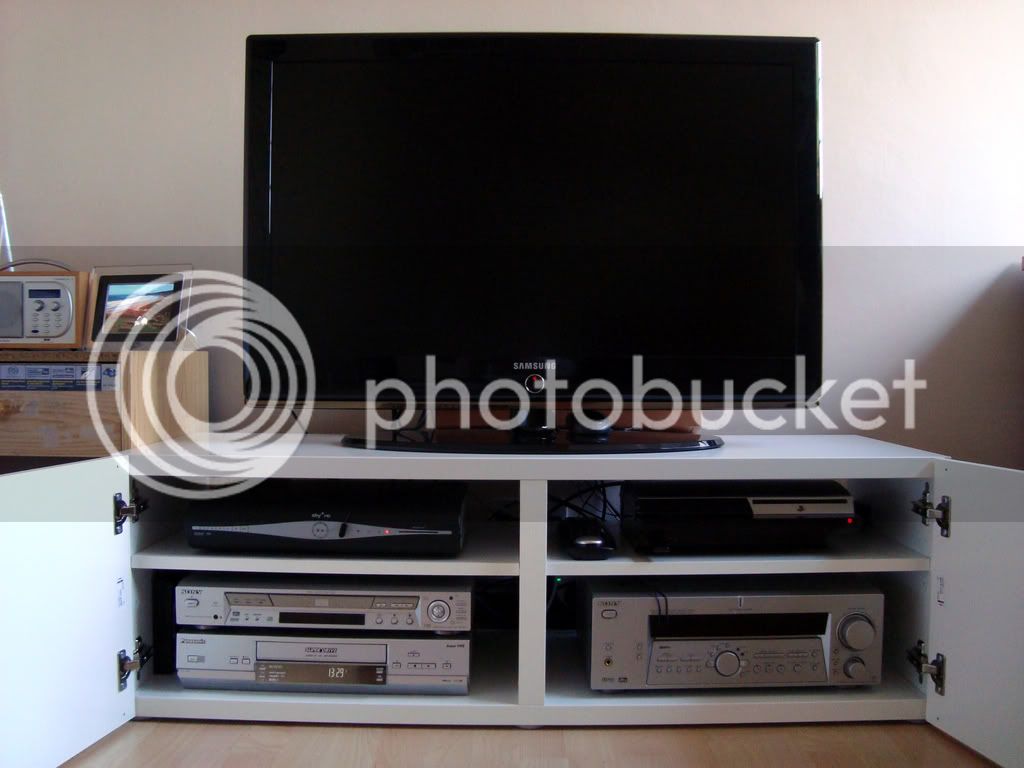 
CFS said:
First on the upgrade list is a new display, looking at the new 32" Samsung HD LCD.
Click to expand...

Go for the Toshiba 32WLT66, JVC or Sony S/V. They all trounce the Samsung.

Thats a big arse dvd collection you got there, nice! is that the entire Red Dwarf collection? I still havent completed mine, got 1, 4 and 5.

You cant go wrong with B&W and Denon, i got the B&W WM1, great sound, and they got there own wall mounts, can use 5 of them aswell, I got 2 as my rears.
If the USA doesn't Bomb You.
DVD's:http://www.intervocative.com/dvdcollection.aspx/neil666
Xbox Live: thedude6666
PSN: thedude6666

Very nice setup .
Can highly recommend the 1015,but one thing I would say is try to give your amp a bit more room to breathe.
Post in the classifieds:Hi,Interested in your Nads.Do you have any feedback from anywhere.Ebay etc.Do you take paypal.What sort of condition are they in.Scratches,marks etc.Thanks

Thanks for all your comments guys.


neil666 said:
is that the entire Red Dwarf collection? I still havent completed mine, got 1, 4 and 5.
Click to expand...

Yep, all 8 of them. Bought the first 2 as an impulse buy, then just kept on going!


joffy1780 said:
one thing I would say is try to give your amp a bit more room to breathe.
Click to expand...

Yeah I definitely agree with you joffy. Only problem is, i'm really limited for space in here at the moment, the unit barely fits along that wall as it is. Would like to get a 3-shelf glass AV unit in the not too distant future, which should improve air circulation.
Samsung LE37M87 | Sky HD | Playstation 3 | Sony DVP-NS700 | Sony STR-DE875 | Panasonic NVSV121EBS | Playstation 2 | Tannoy MX2 | Yamaha NS-E55 Surrounds & NS-C55 Centre | Logitech Harmony One
:: PSN: CFS99 :: Home Set-up :: DVDs ::​

How many DVDs have you got then?

Have you got many comedy series i.e Bears Tail, Extras.
If the USA doesn't Bomb You.
DVD's:http://www.intervocative.com/dvdcollection.aspx/neil666
Xbox Live: thedude6666
PSN: thedude6666

The count's up to approx 280 at the moment. Got a few comedy series like The Office, Bo Selecta, Family Guy etc. I love collecting box sets as you can see from the pic!

For a more detailed roundup of my collection, check out http://www.intervocative.com/DVDCollection.aspx/cfsmith although not all of them have been uploaded successfully for some reason.

Nice setup, that reciever is going to cook in there though, looks like it has no ventilation at all.

WOW! What a cool looking setup.

CFS, I see you got Bolier Room, thats a classic movie, your an Oasis fan aswell good man.

I got about 180 dvds, I love box sets aswell, and Special Editions.

You've done well do get that many dvds, the price of dvds has come right down now!
If the USA doesn't Bomb You.
DVD's:http://www.intervocative.com/dvdcollection.aspx/neil666
Xbox Live: thedude6666
PSN: thedude6666

neil666 said:
CFS, I see you got Bolier Room, thats a classic movie, your an Oasis fan aswell good man.
Click to expand...

Yep, I love Boiler Room, it's definitely got to be one of my favourites - definitely one to watch before an interview or first day on the job (along with Wall Street that is)!

And oh yes, Oasis are my all time favourite band, I still remember buying definitely maybe on tape for the first time when I was 9, so been into them a really long time! The best live DVD they have done in my opinion is There and Then. The opener "acquiesce" sounds absolutely incredible!
Samsung LE37M87 | Sky HD | Playstation 3 | Sony DVP-NS700 | Sony STR-DE875 | Panasonic NVSV121EBS | Playstation 2 | Tannoy MX2 | Yamaha NS-E55 Surrounds & NS-C55 Centre | Logitech Harmony One
:: PSN: CFS99 :: Home Set-up :: DVDs ::​

Clarkey said:
Nice setup, that reciever is going to cook in there though, looks like it has no ventilation at all.
Click to expand...

I know, as I mentioned earlier, I haven't any room at all to reposition it at the moment until I buy a new rack. I do have a large desktop fan pointed at it when it's on though, especially in all this hot weather. There is also quite alot of space behind the amp as well as the tv is much deeper than the depth of the unit.
Samsung LE37M87 | Sky HD | Playstation 3 | Sony DVP-NS700 | Sony STR-DE875 | Panasonic NVSV121EBS | Playstation 2 | Tannoy MX2 | Yamaha NS-E55 Surrounds & NS-C55 Centre | Logitech Harmony One
:: PSN: CFS99 :: Home Set-up :: DVDs ::​

OK, posted a few more pics of the room at night with the LED's switched on, they're really difficult to capture on camera with or without the flash, and as many of you already know look much better in reality.

The surround speakers are only temporarily in that position before I attatch them to the walls further apart from each other.

Up next is definitely a new paint job on them walls, I hate that damn orange!

CFS said:
Up next is definitely a new paint job on them walls, I hate that damn orange!
Click to expand...

Was gonna say I quite liked it .
I've noticed that in all your pictures which include your telly,you cannot see your front speakers.If possible you should try to get them close to ear-level,this would also bring them closer to the height of your centre speaker and should improve your front soundstage .
Post in the classifieds:Hi,Interested in your Nads.Do you have any feedback from anywhere.Ebay etc.Do you take paypal.What sort of condition are they in.Scratches,marks etc.Thanks

recently replaced same sony tv, its still doing a fine job in daughters bedroom even with a cheapo freeview box Now using a tosh 32wlt56 with a 1920 through hmdi at 720 looks fantastic. Only problem is lip sync at 1080 setting, so leave at 720. Would definitely recommend tosh lcds
S

Got any new DVDs, HMV website got some good DVDs in the sale. I got a load off there.

You got quite a lot of cds aswell, I see.

is your DVD player multi region. Much better DVDs on Region 1!
If the USA doesn't Bomb You.
DVD's:http://www.intervocative.com/dvdcollection.aspx/neil666
Xbox Live: thedude6666
PSN: thedude6666

CFS said:
Na it's not multi-region, I don't even buy DVDs on release let alone early enough for import. Why bother when they're going to be in the WHSmiths bargain bin for a fiver a couple of months after! And yes it is an addiction, bought 9 movies in the last 2 weeks, oops.
Click to expand...

Its not the fact of getting them early, its the fact that there dvds are much better than ours, for DD lots more films are in DD 5.1 such as Donnie Brasco, which isn't in 5.1 in region 2, lots more of there films have DTS. And they have a lot more special editions than region 2. And some special editions are better than region 2.
If the USA doesn't Bomb You.
DVD's:http://www.intervocative.com/dvdcollection.aspx/neil666
Xbox Live: thedude6666
PSN: thedude6666