Can i use 2 routers on 1 house? PICTURE FOR HELP

well i did search and came up with alot of answers but still iffy on my situation.
So i have a phone jack up stairs that has the router and wirless router connected to the upstairs computer. and i was wondering if i could hook up another router downsairs and run a ethernet straight to my computer downstairs cause the wifi signal is really weak down stairs for gaming. here is a picture for help 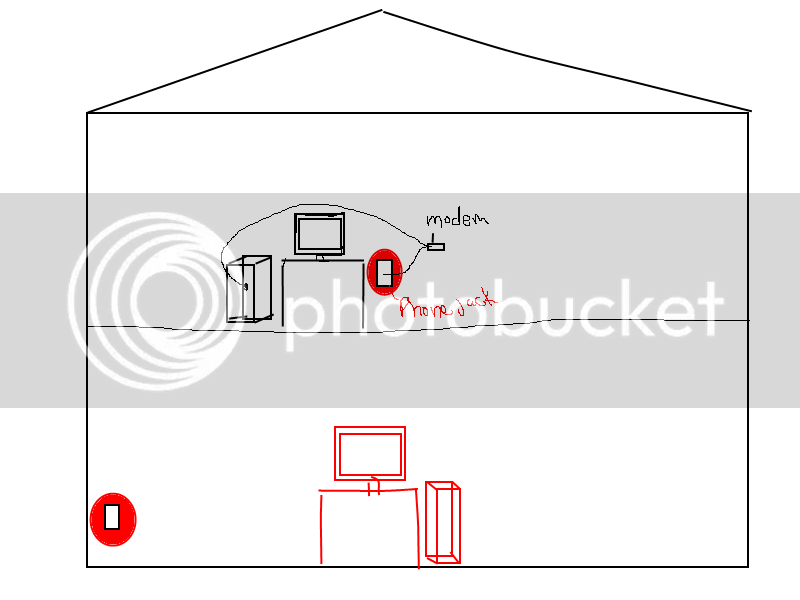 Your current router should have a spare Ethernet socket run a CAT5 cable to the downstairs computer and that is it. If your router upstairs does not have a spare socket get a switch. Plug router into switch and then out of the switch to as many computers as the switch allows.
Example a 5 way switch will plug into your router and leave 4 ports free.
Switches - Scan.co.uk

The easiest and most effective way of doing this will likely be a set of Homeplugs.

Homeplugs are less messy than laying cables (they utilise the existing electrical cables in the walls to communicate with one another) and preferable to a wireless connection, due to them not being susceptible to wireless interference from neighbours wireless networks.

In order to get the best possible performance from a Homeplug always plug it directly into a wall socket, never into an extension lead. It also important to notice that in order for Homeplug adapters to work all the power outlets have to be connected to the same fuse box/electricity meter.
Last edited: Dec 28, 2011
You must log in or register to reply here.
Share:
Facebook Twitter Reddit Pinterest Tumblr WhatsApp Email Link
Top Bottom