I’m looking to upgrade my Hi-Fi setup. I currently have an Onkyo A-9010 and a set of monitor audio bronze 1 speakers.

Can anyone recommend any speakers/amp combos? My max budget is around £1400.

This seems like a good deal to me? Is it?
Arcam SA10 Amplifier Monitor Audio Silver 100 Speakers

Any advice would be appreciated

By that I mean, you have to understand what you want for budget, power, and features, then seek out amps that meet those goals.

The Arcam is a nice amp and that package is also very nice ...assuming... it does what you need done. The Arcam is 50w/ch, it appears to have 1xOptical and 2xCoaxial connections so it has a DAC, and while it does have a Network Connection, it is not clear if it has Network Streaming. It also has a Phono Input and Pre-Amp outputs. (~£700)

50w/ch is sort of low, but for most people for most music at most volumes that is fine. I went through my Party Years with a 45w/ch Pioneer.

But taking a completely different approach is this bundle - (£1169) -

Same speakers, Monitor Audio Silver 100, but with the Yamaha RN803 Network Receiver. The RN803 has 100w/ch, DAB/DAB+, Network Streaming, DAC, Room-EQ, Full Bass Management, Phono In, Sub-Out, and so on.

So, more Power and a much more expanded feature set. Just trying to illustrate the contrast in various systems.

Are you set on Bookshelf Speakers or would you consider Floorstanding?

Here are a range of Yamaha Bundles -

Good Yamaha Amps in your price range are the AS701, AS801, and the RN803 Network Receiver.

But, all that said, I can't fault the original choice, but make sure it does what you need done.

One tiny thing that may not matter to you, but it does to me - Tone Controls - the Arcam does not appear to have them, though the Yamaha does. So, again, think about the features you want and need.

Repeating myself, I can't fault the Arcam/Monitor Audio bundle, and a nice +£300 discount certainly doesn't hurt.

Is your budget pretty much locked at around £1000, or is there some flexibility there? 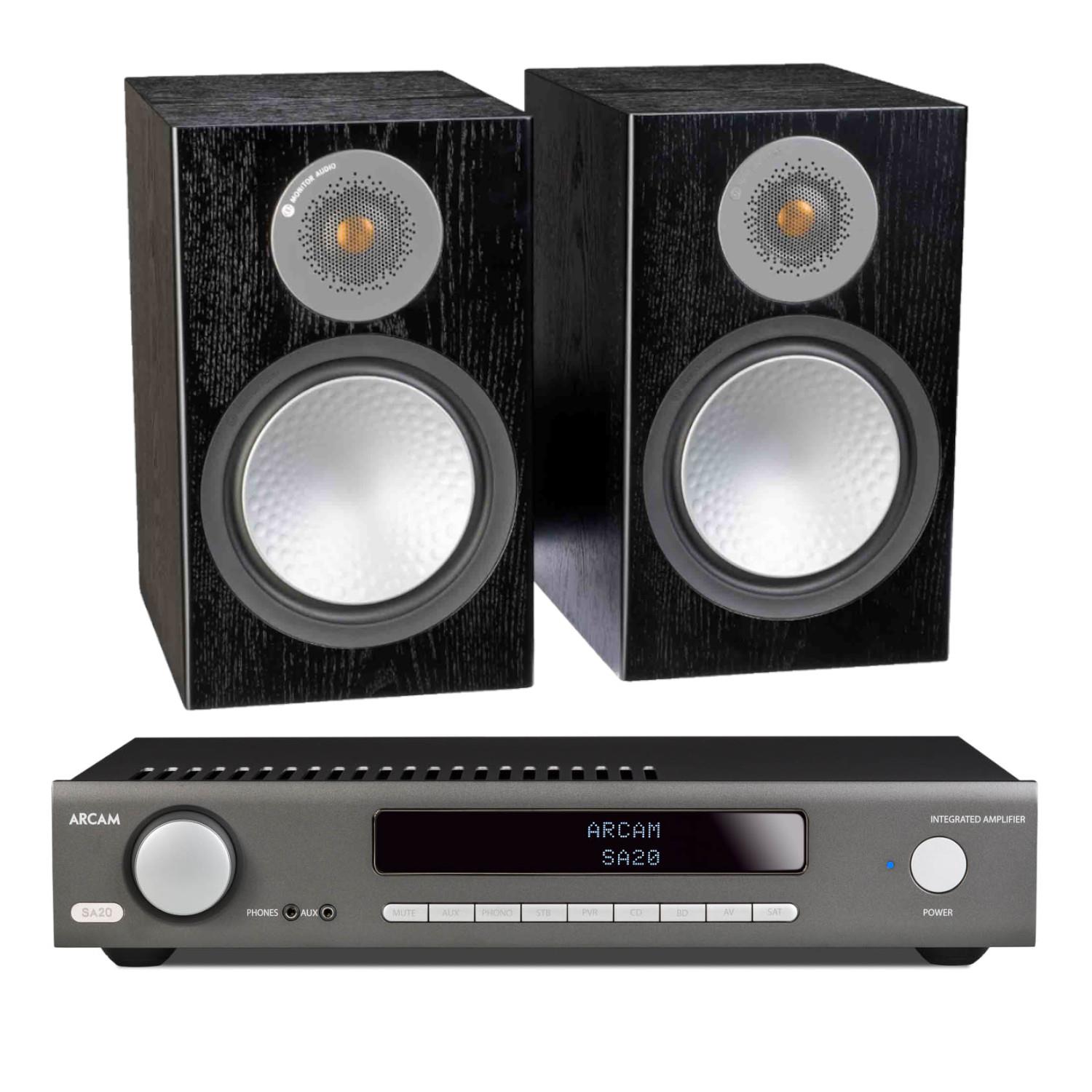 A package comprising the Arcam SA20 ampllifier and the Monitor Audio Silver 100 speakers. 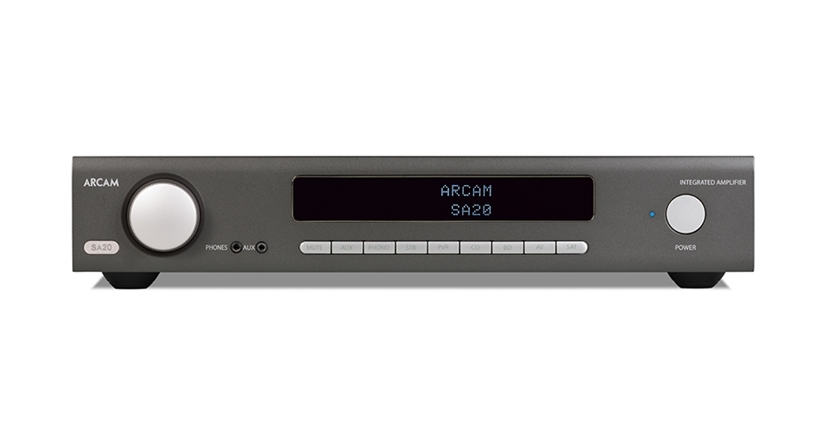 The design of the HDA range draws upon all of Arcam’s experience as one of the UK’s most respected audio companies, to produce Arcam&rs...

I will always go for more power if I can get it. But that is purely up to you and your wallet.

Personally, I like the Yamaha RN803 - more power, more features - but that doesn't mean I don't see the appeal of the Arcam SA10/SA20 to other people.

If you really don't have a problem spending more money, the SA20/Silver 100 would be preferred.

Thanks for the write up that's the kind of info I'm after. I'm no expert, just looking to upgrade my setup. I will definitely have a look at Yamaha amp, looks like a good feature set.

As for the SA10 vs SA20, is the latter going to sound better at normal volumes? I don't want to skimp on £300 only to regret it later.

What other components do you have ,cd player, vinyl, tuner,cdo you stream. 1400 is a good budget but your question may need a bit more background
Everything is a lie, except the truth
Marantz PM6006,Sony str-da2400es, q acoustis 2020i, ,Mackie MR6 Mk3s,jbl lsr305s, Sony bluray players, cambridge audio azur 640 cd,Chromecast audios, Raumfeld/Teufal connectors, AKG 550s, Nikon dslrs and lenses (also sigma/tamron)

Mojost said:
Thanks for the write up that's the kind of info I'm after. I'm no expert, just looking to upgrade my setup. I will definitely have a look at Yamaha amp, looks like a good feature set.

As for the SA10 vs SA20, is the latter going to sound better at normal volumes? I don't want to skimp on £300 only to regret it later.
Click to expand...

Power is not about volume. If you double the power, you only get a slight increase in maximum volume. Notice that is in MAXimum Volume. Most of the time you are not at maximum volume.

Typically at typical in-room volumes, you are running between a fraction of a watt and 1 watt average. But when peaks jump up in the Music or in a Movie, they can jump a lot higher before hitting an 90w ceiling than they can jump up to hit a 50w ceiling.

This is called HEADROOM. How much extra room, relative to power, do you have to accommodate the peaks in the sound.

So, more power is always a good thing, but 50w/ch to 8 ohms is still fine. But if you can actually afford it, get more power.

Also, much like more power in a car, more power in an amp is more about control than it is about speed. Speed being the analog to Volume. How much brute force to you have to make the speaker cone move to where you want it to move to, and to hold it there.

So, Power has advantages, but those advantages are typically not related to volume.

Again, it is about sorting out your priorities relative to Budget, Power, and Features.

As an example, how much does Network Streaming matter to you?

If you are not interested at this, then the Arcam is fine. But if Network Streaming is very important to you, then the Yamaha should probably be higher on your list.

Created by tradition and progress

Keep in mind, you can add Network Streaming to any amp for £130 or £250 or £500 depending on how far you want to take it. Though you can certainly spend substantially more than that if you have the budget. But there was a guy on the forum who wanted to add Streaming to his £2500 Amp, and he was perfectly happy with the £130 option. It is all down to personal priorities.

Mojost said:
... I currently have an Onkyo A-9010 and a set of monitor audio bronze 1 speakers.
Click to expand...

The Onkyo A-9010 is a low cost modest 44w/ch amp, though a pretty clear amp. The Monitor Audio Bronze 1 are small but well regarded speakers. But they are also on the low end.

The system you are looking at now for up to £1400 will be substantially above your existing system. I think I can say that without reservation.

Maybe you could move the old system to your computer for better sound. It is a good system, just not in the same caliber as the systems you are now looking at.

As someone else asked, give us a full range of other equipment and uses for the system - CD, Computer, TV, Turntable, Streaming, Other?

The two systems discussed so far would cover pretty much all those, but the better we understand the system and your needs, the better we can focus our responses.

The problem is there are hundred of amps and speakers to consider. The way to narrow that down, it to focus on your specific needs and priorities. Then we can focus on specific equipment that meets those specific needs.

Mojost said:
Thanks for the write up that's the kind of info I'm after. I'm no expert, just looking to upgrade my setup. I will definitely have a look at Yamaha amp, looks like a good feature set.

As for the SA10 vs SA20, is the latter going to sound better at normal volumes? I don't want to skimp on £300 only to regret it later.
Click to expand...

As Steve says, power isn’t about volume. It’s all about control.

I’m listening right now to my version in the SR250.

It's hard to go wrong with Arcam. The amps themselves don't offer streaming capabilities as that is left to the matching CD-S50 CD player/streamer, but if streaming is important to you, you could add the Bluesound Node 2i to your system. Having had experience of both Yamaha MusicCast and Bluesound, I would choose Bluesound every time.

The other amp well worth considering is the NAD C368. It has plenty of power, with strong current delivery, and a healthy array of analogue and digital inputs. There is also the option to buy it with or without a Bluesound module fiited to one of the MDC slots at the back, or to add this functionality later.
1. Project The Classic/Ortofon 2M Silver * NAD PP3 * Musical Fidelity M2scd * Bluesound Node 2i * Musical Fidelity M2si * Wharfedale Linton 85
2. Bluesound PowerNode 2i * Dali Spektor 2
You must log in or register to reply here.
Share:
Facebook Twitter Reddit Pinterest Tumblr WhatsApp Email Share Link