(bare with me for question at bottom)

I was currious as to the way this works, I live very very close to the green cabinet that provides the fiber optic broadband. The day the installation was made The engineer told me the Line was okay for 39MB,

I called customer support and the guy on the phone told me it connected the other day at 39.7mb, which is impossible since I have ran speedtest.net every day on various servers since i got it and the connection never passes 20mb download, 8mb upload and around 2.4 - 2.5 mb p/s on a good download.

He said its like driving a ferrari, it can do 200mph, but u never achieve that, well my 20mb is 50% of my lines capability and as much as I am happy that it is much faster than before, im concerned that I am not getting what im paying for.

He also said, you dont always connect at the fastest speed as the servers share out the connection depending who all else has the service, my reply was well....BT infinity is a new service and if i am only getting 20mb now, 50% off its capability, what happens when new customers join, will it only get worse....he seemed adjatated by that question.

Sooooooo..... my question, Engineer said it connected the other day at 39.7mb.... AM I connected at that speed, yet they are capping me and everyone else at 20mb ish SPEEDS, because THEIR services cant cope with everyone on the full, unleashed 40mb?

Ah right that makes sense, albeit it concerns me that as I said its a new service and between me and the exchange im sure is relatively free fibre, I thought with little to no people using it, I would be acheiving 80-90% especially since im so close to the green box. I hope it dont deteriate the more the service grows

Just to check, you are doing these tests over ethernet or a link definitely capable of 5MB/s? Wifi can often have trouble coping with these speeds.
V

TBH i am using wireless, BTHomehub apparently has the capability of 130mb,

im actually also testing the homeplug 85mb (thread bellow this one) mostly for the ps3, but on the pc, the speed tests are coming back at 8mb down and 5mb up, which is quite poor, albeit mostly my setup on the plugs tbh

Cant understand if they say im "connected" at 39.7 and the line is capable off that.

Perhaps it may be worth while plugging the laptop into the router through eithernet downstairs too doublecheck? but damn if the Homehub router cant wirelessly stream 40mb line at around 5mb p/s ish, then they got issues
V

Oh ***, put my laptop in and instantly getting between 30-35mb on the speedtest...those homehub wireless must be useless, either that or my internal wireless card must be in the pc, (RAlink rt61 Turbo) got a RT2560f here, which is apparently newer but not sure if its gonna be any difference.

Anyone any sugguestions? Router is downstairs, pc upstairs, ethernet cable really isnt an option, im using the Homeplug and getting no where near 20mb nevermind 40 (for the ps3)

(there is a BT installed extention up stairs that BT had used for my last Router, but they opted to install downstairs)

That's a bit of a wide, sweeping statement that doesn't necessarily hold full truth to be fair.
V

with this new broadband, i have been browsin the net and checking out my hardware (so many jokes i know lol) to find out how to improve the speeds im getting wireless, seemingly the wireless adapters im using are the 802.11 b/g

Apparently I need a 802.11 N device to achieve speeds off arround 300mb wirelessly instead off 54mb, if this is right, i should instantly obtain my maximum broadband speed wirelessly?
B

Vizzeh said:
1. Apparently I need a 802.11 N device to achieve speeds off arround 300mb wirelessly instead off 54mb,

2. if this is right, i should instantly obtain my maximum broadband speed wirelessly?
Click to expand...

Iccz said:
That's a bit of a wide, sweeping statement that doesn't necessarily hold full truth to be fair.
Click to expand...

I absolutely concur with Iccz.
V

I suppose its worth a shot?....I hope I would see some benifit, I will purchase and post if I see any results..... Off to PC world, cba waiting on an internet delivery in this case
V 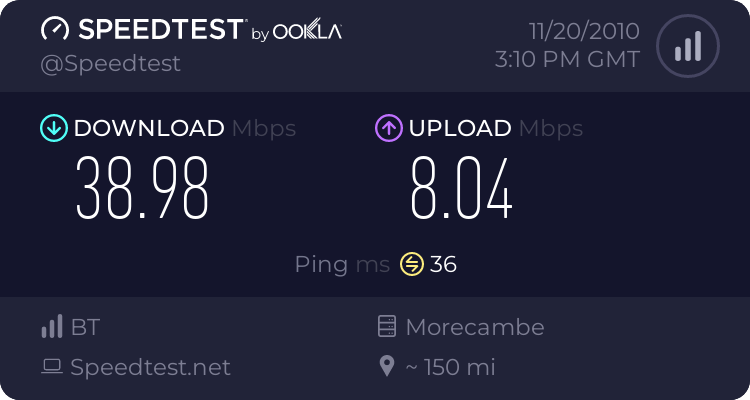 I feel your pain seriously, thing is, I live between 2 citys, 3 miles from one and 10 miles from another, but am central too neither.

I was there basically when computers where taking off, right up from even the consoles, amstrads, win95, 98 etc etc, using 48k then 56k modems, then went to isdn, when hardly anyone knew what interenet was lol, then I got the dual isdn 64k, paying for 2 isps digitaly for 128k paying around 60quid a month (about 8-10 year ago when 30k/s was blistering speed lol)

Then out of the blue broadband comes out off the works, but only to people who live within 3.5km from the exchange, and I am i believe 4.5 km, meaning i got shafted, and all these computer/internet newbies (im no expert but I suppose capable) are asking me what pcs too get and their getting their fancy new broadband, I was in tears nearly lol.

When I was about 10-14 Playing online on the pc 56k, seeing all these Americans with their T1, T3 (silly quick) connections, I had the child like dream off being able to do the same, now 10-15 years later im there, still wowed by the speeds but without I suppose the childlike obsession off wanting faster pings and speeds (yeah right lol - Lovin it)

Couldnt be happier, but I Do sympothise, the way its going though, it can only get better, im sure they can improve on the 40mb provided now, apparently its 'future proof' according to BT and the rural areas will get it, its only a matter off time. (basically after the larger areas contribute enough financially to pay for it)
O

So they can make you buy the 50mb to benefit from the fibre optic broadband any time.
See you on the dark side....
B

ovensy said:
i really don't like the bt home hubs is there a netgear router or a belkin router i can replace it with that is wireless as well
Click to expand...

I can't think of any reason why your erratic speed could be the fault of the BT Home Hub. However, if you would like to prove it you can use any so-called "Cable" router in its stead.

Many people will disagree with you.
​
You must log in or register to reply here.

R
How to phrase the question