Wondering of anyone can help me regarding my BT Whole Home Wi-Fi Discs which I have set up in our home, which by the way has FTTP. I then purchased the triple pack of BT Discs so we had a strong signal all the way through our 4 bedroom newly built house.

Now the issue is when I'm watching Twitch or YouTube it always seems to want to buffer, and with Twitch I sometimes miss out on what the streamer has said. This shouldn't be the case with our WI-Fi, it should really be spot on.

What I believe/could be happening is the internet is switching between discs when it has a better signal, and while it's doing this it's causing the buffer..or this could be totally wrong

The Wi-Fi Antenna which I am using is the one which came with the Motherboard - Asus - ROG STRIX Z370-E Gaming ATX LGA1151 Motherboard, which is fited to the connecters at th eback of the Mobo.

Quote 'Next-level 802.11ac Wi-Fi with 2x2 dual-band 2.4/5GHz antennas offer up to 867Mbps* transfer speeds — and the very latest Multi-User MIMO (MU-MIMO) technology ensures that every connected user** experiences the best wireless and online speeds' ....I aint getting that

Last night I was testing the speeds at around 1am and getting speeds of the below which I think is totally wrong! Is there anyway to set the Desktop to operate from one BT Disc only and not flip between others?

Does your new build have wafer thin walls like mine does? (mine was built in 2008) If so, you'll probably find a top end router such as Netgear R7800 or any of the Asus high end routers will easily cover your full house with wifi so no need to faff around with additional Access Points or Wifi Mesh System. Like you I have a Openreach FTTP line in my home, I have a Linksys EA9500 router connected to the Openreach ONT and this gives full wifi coverage in the home, wifi speeds are > 300 Mbps on all of the wifi clients in all parts of the home - this is also a 4 bedroom home. 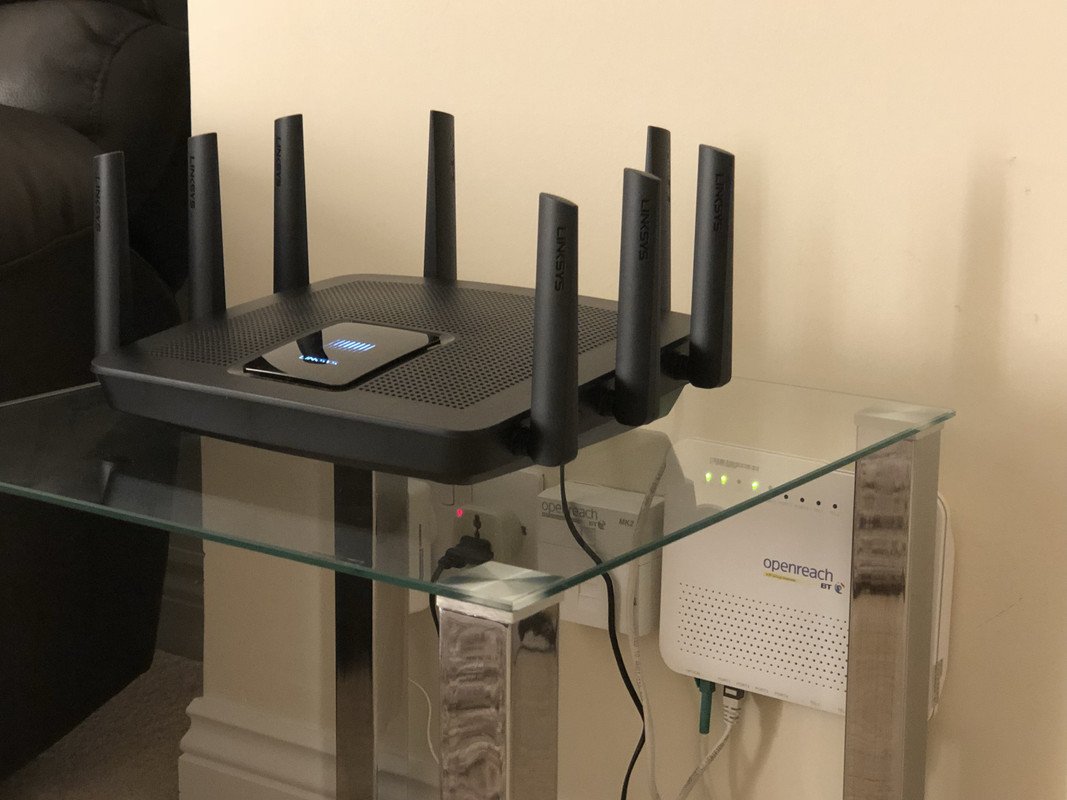 Wow mate, yes ours has wafer thin walls and doors which you could spit through! Ours was just built this year

Spent about £150 odd for the discs hmmmm

If I happen to acquire that Router you have do I need to do anything, like mess about with the details in the Router so it works on BT Fibre, purchase any other peripherals?

I know I could add just any old WiFi Router to my last provider which was Sky, or I could but I just couldn’t fathem out how to do it

Try connecting to your router directly, either Wi-Fi or ethernet.
Also you could unplug the third disc, so you have only the one to connect to.
finally make sure you've turned of the wireless on your router, sounds like you may reconnecting to that instead of your BT discs.
good luck

I'm not aware of any option to lock it to a particular disc but you can check in the BT Whole Home app to see which disc it's connected to. Worth checking to see if it does switch discs after a stutter so you know if that's really the issue or not.

FWIW I also have BT FTTP and the BT Whole Home kit solved all of my Wi-Fi issues. My desktop PC is connected by ethernet though so I can't advise on an antenna.

Yep, wish I had ran Ethernet through the house whoch I forgot to do

I only have a normal telephone line whch is about 30cm away from the desk top
Last edited: Sep 26, 2018

TBH mate I would just return the BT mesh system for a refund if you can otherwise just sell it on ebay (should get around £100 for it easily) as its waaaay overkill for a home which does NOT have thick/concrete walls. I would highly recommend the Netgear R7800, its currently priced at around £160 from Amazon but Amazon regularly drop this to £130 so well worth keeping an eye on this. The R7800 would simply replace your main BT router.

How easy would it be to sort everything out if I swapped the BT Hub over to the Netgear R7800? Would I spend quite a bit of time messing about with the Netgear settings?

I’m gona have a hard job on my hands persuading the other half, because I’ve just forked out all that money for the BT Discs....

Purchased the Discs in April so no way of returning, I can only sell them on EBay at a loss
Last edited: Sep 26, 2018

psychopomp1 said:
TBH mate I would just return the BT mesh system for a refund if you can otherwise just sell it on ebay (should get around £100 for it easily) as its waaaay overkill for a home which does NOT have thick/concrete walls. I would highly recommend the Netgear R7800, its currently priced at around £160 from Amazon but Amazon regularly drop this to £130 so well worth keeping an eye on this. The R7800 would simply replace your main BT router.

Edit: If you want to buy the Linksys EA9500 (same one i'm using on my FTTP line) which is a brilliant router btw, then might be worth putting in an offer of £150 on this.
Click to expand...

What about these 2 in my Amazon basket mate, would the Router just be a normal plug in a play or will I have to mess about inside the settings?

Was going to PM you but your not accepting conversations You will need to enter some settings into the R7800 but its very easy to do and once you've entered them you won't need to touch the router again. See here, post 5 of 8:

However if you're still struggling, post here and we'll help you out further.

Re: Asus PCE-AC88 PCI card, I have the exact same card and its brilliant. Performance is almost ethernet-like but make sure you use the external antenna stand that comes with it to get the best perfomance - otherwise you won't get more than 866 Mbps link rate if you plug the antennas directly into the back of the PC. Good luck!

I honestly had about 6 complete drop outs last night upstairs while sitting watching Twitch and surfing the net! Really can’t understand it all and hopefully this all helps and I’ll fire the Discs up for sale.

Just to add, again when I was getting drop outs last night this was my Speedtest check which is a joke