Saoirse Ronan stars in Brooklyn, Nick Hornby's wonderful coming-of-age story about a young Irish immigrant's struggle to choose between her home and America.
Read the review.

Write your own review for Brooklyn

Characters name is actually a strange spelling - thought it was normally spelled 'Eilish' with the h. I don't know, could be wrong.

Ronan looks just above 'plain' average in her movies, but I saw her on an Irish chat show there last week and she looked very above average looking - especially when she put on a cowboy hat during interview

I love her as an actress though - great in anything I saw her in, such as Grand Budapest, The Host, and the underrated "Violet & Daisy"

Has anyone else seen this yet? It's arguably the best reviewed film of 2015, but doesn't seem to generating much buzz here. Is it a must see for the cinema, or will blu at a later date suffice?

Not my sort of film, but my mum text me yesterday to say she saw it, she said it was 'outstanding'.

Great movie. One of my favourite this year.

barnaby jones said:
Not my sort of film, but my mum text me yesterday to say she saw it, she said it was 'outstanding'.
Click to expand...

I'll be happy to take your Mum's recommendation, and add it to the list then! 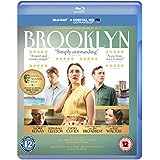 Saoirse Ronan stars as Eilis, an Irish immigrant starting anew in 1950's New York.
This represents a substantial change of pace compared to my usual viewing habits, but on the back of excellent reviews, I gave it a spin. It proved to be just the alternative to my constant stream of thrillers, and big budget fare.
Ronan adds another typically good performance to her cv, and there's heavyweight support from Jim Broadbent, Julie Walters and Domhnall Gleeson. And although the story progression demands it, Ronan's transformation from a dowdy, meek 'plain Jane', into a confident, glowing and sharply dressed young woman is quite remarkable.
There's a deliberately marked contrast between the scenes set in Ireland, and those in Brooklyn. Ireland is all earthy tones, and natural colours, whereas Brooklyn utilises primary colours for the characters wardrobe, and the city in general. Some of the Brooklyn scenes are beautifully lit, and it really seems to capture the period. Very strong production values here overall.
The story is always engaging, but I wasn't entirely convinced of some of the choices Ronan makes in the third act.
So, probably not for everyone, but I thought it was a great evening's viewing.

barnaby jones said:
Not my sort of film, but my mum text me yesterday to say she saw it, she said it was 'outstanding'.
Click to expand...

I'll be happy to take your Mum's recommendation again in future, as I really enjoyed it.
You must log in or register to reply here.