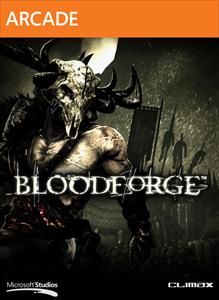 It is an ancient world of myth and legend. Powerful gods rule, and vicious tribes swear allegiance to them. One warrior stands free: Crom. He has given up battle in favour of his family. But the gods brutally decide to drag him back in to their fight, leaving Crom with only one option: Revenge.

With a brutal combat system, stunning art style, and a deeply compelling story, Bloodforge empowers you to slaughter hordes of demonic soldiers, deformed worshippers, and the gods themselves, using ferocious Rage Kills, devastating Rune attacks, and furious Weapon Combos. Help seal Crom's fate - and the fate of the rest of the world - in this dark, visceral story of revenge, betrayal, and destiny.
Click to expand...

Did anyone try the demo for this?

It reviewed quite poorly, but the demo itself is far too short to get an idea of what the game is like. You literally start off in an area, fight 10 blokes, then that's it - demo done. It's over in a couple of minutes. The combat seems like it could be pretty good and it's brutal, although the camera is pretty **** poor.

Overall, this one is a pass.
S

Damn, I was hoping this was going to be good and like Dark souls
You must log in or register to reply here.

H
Underworld Awakening and Quadrology available on Disc 14th May