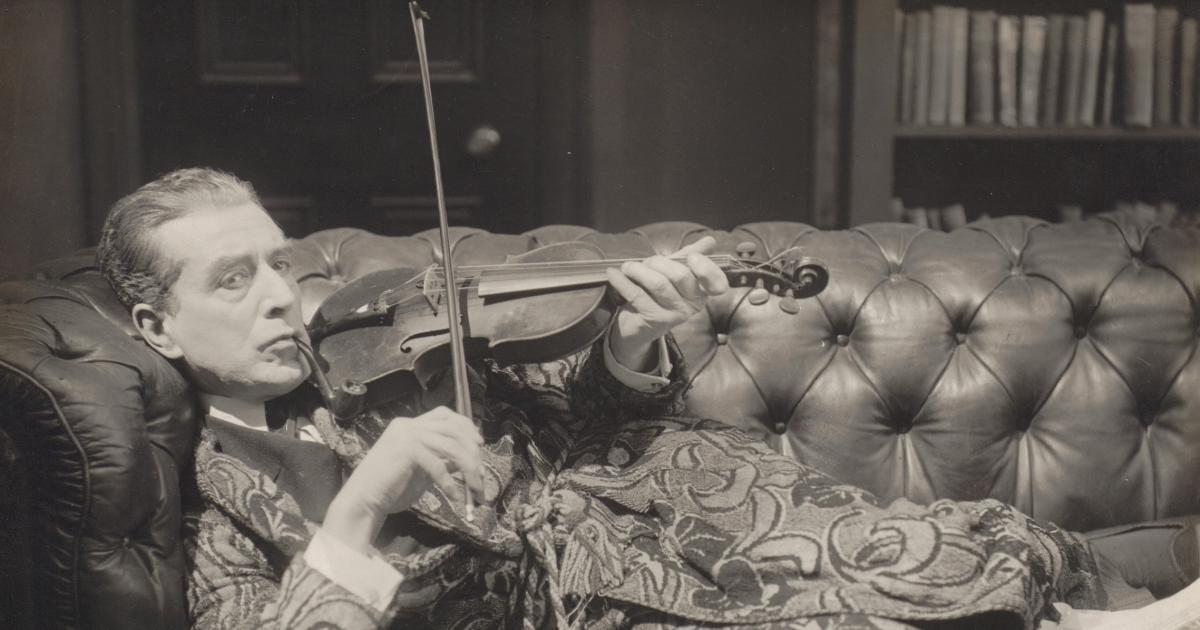 The on-screen Sherlock Holmes who had the approval of Arthur Conan Doyle himself, Eille Norwood starred in a series of 1920s silent films. Now they’re being fully restored as part of a major BFI project made possible by Iron Mountain Entertainment Services.
www.bfi.org.uk

The on-screen Sherlock Holmes who had the approval of Arthur Conan Doyle himself, Eille Norwood starred in a series of 1920s silent films. Now they’re being fully restored as part of a major BFI project made possible by Iron Mountain Entertainment Services.

A 1920s silent Sherlock Holmes film series, starring Eille Norwood as the famous sleuth, will be fully restored in a major new project announced today, 100 years since the first serial was originally screened. Once completed, this will be the first time that Stoll Pictures’ entire film series, currently held at the BFI Master Film Store in Warwickshire, will be seen by audiences in more than a century.

Work is being undertaken by experts at the BFI National Archive and is expected to be completed by 2023, to coincide with the centenary of the release of the final serial and feature adaptation of The Sign of Four (1923).

Support for the digital restoration project has been made possible through Iron Mountain Entertainment Services (IMES), the global leader in innovative storage and information management services. IMES’s Living Legacy initiative is their commitment to preserve and make accessible cultural and historical information and artefacts.

This work will involve inspection of surviving print materials and original paper documentation – stills, press books and promotional material from the period – as well as studying Conan Doyle’s source material, the stories themselves, to assess what restoration work is needed to reorder and reconstruct the films, including missing intertitles.

In 1923, Norwood returned to the role in a Sherlock Holmes play written specifically for him, The Return of Sherlock Holmes, which opened on the West End. The play was acclaimed by public and critics alike and toured the UK and internationally. Norwood still holds the record for having appeared in more Sherlock Holmes films than any other actor connected to the role.

Each generation has its own on-screen Sherlock. Today it is Benedict Cumberbatch; in the 1980s Jeremy Brett; and in the 1940s Basil Rathbone, and they define the look and manner of the master detective of their era. For the silent period, the great cinematic Holmes was Eille Norwood. Norwood was the Holmes who had the stamp of approval from Arthur Conan Doyle himself, who publicly praised his performance: “He has that rare quality which can only be described as glamour, which compels you to watch an actor eagerly when he is doing nothing. He has a brooding eye which excites expectation and he has a quite unrivalled power of disguise.”

“There have been a number of silent Sherlock films previously restored, but the scale of this project to restore an important part of the screen Sherlock canon is on another level,” says Bryony Dixon, curator of silent film at the BFI National Archive. “The BFI’s curators and restoration experts will be donning their deerstalkers and taking up their magnifying glasses in pursuit of bringing the pieces of the puzzle together to solve this particular film mystery. We are delighted that Holmes film fans from across the world will at last be able to enjoy Eille Norwood’s performance as the great detective. The restoration is a mammoth undertaking and we are grateful to have the support and commitment from Iron Mountain in helping us realise this project, what an adventure!”

“Sherlock Holmes is one of the most famous literary characters of all time, but he’s more than just a character,” says Lance Podell, senior vice president of Iron Mountain Entertainment Services. “Sherlock Holmes is an enduring emblem of observation, intelligence and mystery whose tales have enamored fans around the world, including all of us. IMES’s mission is to protect and activate precious archives, preserving our collective cultural heritage. In this way, we are thrilled to work with BFI to support the restoration of the Stoll Pictures Sherlock Holmes film series so that these films can be shared and enjoyed for generations to come.”

The BFI National Archive holds one of the largest collections of film and television in the world, safeguarding moving images created over the last 120 years from the earliest late Victorian films to the present day. It’s currently in the initial research and investigative phase of the Sherlock Holmes project before restoration work itself can begin. Reconstruction is a key part of a project of this size and scale. Like the master detective himself, employing the detection work of our curators and the forensic technical skill of our conservation team of archivists to follow the clues and piece together the films from the best available sources.
Click to expand... Sherlock in silence seems strange now but I wonder if they'll at least add some fitting traditional accompanying music and, the sound of a spooling cinematograph for effect..?
You're acting like a snail on a wet Friday.
You must log in or register to reply here.