My daughter is trying to get the above WiFi extenders to work in her student house. She has a Plusnet Hub but when she tries to connect with the extender the extender/hub refuse to accept the WiFi password for the Hub. Tried everything including having the extender near the hub but its not a range issue just the Belkin stubbornly refusing to use the correct password being inputted to pair with the Hub. Everything else WiFi works, iPhone, laptop but not the Belkin. Anyone any ideas please ? Both myself and my son who is a Network consultant have failed even though its obvious the password being inputted is correct and case sensitive not an issue
Sony 40HX753 LED, Denon X2400, Q Acoustics 7000i Speakers, Amazon Fire Cube 4k UHD, Olympus OMD E-M10 Mk II, Panasonic TZ25, Sony RX100
M

It's probably best to contact Belkin Technical Support. If that's not fruitful and it's a fairly recent purchase, return it and try something else.

In that light, it may also be worth contacting PlusNet and asking whether they recommend any particular model of "repeater" (which is what this device is) for use with their Hub.

Who provided the PlusNet Hub - have the residents themselves done it or was it provided as part of some kind of "dormitory" package. It's not unheard of for network managers in student dormitory type scenarios to (contractually) ban the use of such extender and (technically) implement counter measure against their use. If you're renting a "house" in what is effectively the private rental sector, then the latter is probably not applicable.
Last edited: Oct 4, 2017

Thanks Mick. Its a shared private house and I believe a self install. I've looked at the router settings and they are all "normal" and nothing special. Changed the password to "password" so there can be no ambiguity but that still wouldn't work. Its as though the Belkin isn't talking to the Router correctly in some bizarre way.I've raised a call with Plusnet and Belkin although not confident of Belkin at all.

Plan Z is, as you suggest, try a different make and I'm looking at a TP Link 1200 or even a Powerline based WiFi device that provides a WIFi hot spot rather than repeater. I've asked my daughter to ask the landlord if I can hard wire a Cat cable to her bedroom and she can have a dedicated AP. It would be all surface mounted and a bit of a wiggly run but doable with no damage to anything. Problem is she is in Falmouth and I live near Basingstoke. Not exactly local

topgazza said:
...Its as though the Belkin isn't talking to the Router correctly in some bizarre way.
Click to expand...

It's rare, but bizarre things do happen - Wi-Fi is a hugely more complicated protocol than ethernet.

Some years ago, in these columns we uncovered a situation with a particular version of BT HomeHub whereby devices couldn't "roam" to it from another router unless encryption was turned off - obviously that's highly undesirable.

I work delivering enterprise networks and the number of baffling compatibility issues we get on so called standardised protocols is crazy. Manufacturers often play lip service to meeting standards but just add their own flavour which ends up complicating things. I suspect its similar here and a TP-Link AC1200 may help. But its possibly a weak signal anyway so might even try an Asus router/modem if nothing works
Sony 40HX753 LED, Denon X2400, Q Acoustics 7000i Speakers, Amazon Fire Cube 4k UHD, Olympus OMD E-M10 Mk II, Panasonic TZ25, Sony RX100
M

Given that they've tested close by to the router, it's probably not a "Wi-Fi signal" issue as such, (notwithstanding that there's no such thing as "Wi-Fi signal" as most people conceive it.)

An important point with "repeaters" is that they need to by physically positioned with some care so that they are "in range" of a descent signalling environment (noise, level, etc.) of both the "base" router and the required coverage area. So more like this: A----R----P and less like this: A-R-------P

If they've tested other devices (phone, laptops, etc.) in the locale proposed for the repeater (the repeater, not the coverage hole,) successfully, then it tends to suggest it isn't a fundamental signalling issue.

You could perhaps try knocking out all the protocols and testing them one at a time (A,G,N,AC) and in both wavebands (2.4GHz and 5GHz) for N (for the other protocols cited, the waveband is mandated in standards, N can use either though it's not mandated to support both,) and see if it can be localised to an issue with a particular protocol and/or waveband , but on the evidence it's a bit of a forlorn hope.

From a distance we got her to try some of the above. But essentially we had the repeater in the same room as the router, Plusnet Hub I think, and were able to select the Hub OK but the app just refused to accept the network password. We made sure it was the same Hub as there could have been one next door and the SSID was correct. It could just be a faulty repeater of course.

Everything else can log in from the various locales around the house but her room just seems to be the weakest signal. So I have suggested we try a Powerline WiFi device which at least will give her, her own WiFi "zone" in her room. Assuming the electrics are OK. I'm going down in a couple of weeks and will take a Powerline WiFi device 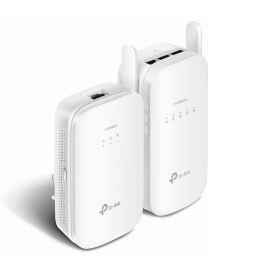 If they work OK over the given mains cct, HomePlugs will also afford the advantage of not clobbering throughput (speed) as repeaters tend to.

For optimum performance, it would be best to set the radio channels for the router and HomePlug manually and so that they differ to minimise/eliminate any inter-cell interference. SOHO kit doesn't "talk" to each other in any meaningful way to agree a radio channel plan. In SOHO environments I advocate setting it manually rather than letting thing "auto" channel. They can end up frequently changing channel to "avoid" each other and end up in a merry dance which can lead to a problematic usage experience.

For the 2.4Ghz waveband, choose 2 channels from the set [1,6,11] and for the 5GHz waveband, just ensure they are different. There are other complicating factors for N & AC, but such a channel plan should give you a decent start.

I wouldn't take much notice of the Internet Myth that all ISP supplied routers are somehow inferior. Much if such commentary is made by individuals who are well meaning, but lack even the most basic knowledge of how Wi-Fi works, let alone the expertise and facilities to test them objectively (even Professional IT Press falls into the same trap - it's a lamentably poor show.) For every one ill informed person moaning about one ISP router or another, I'll wager there are a hundred thousand using the same model just fine. IIRC PlusNet's router is basically a rebadged BT HomeHub and they are decent enough.

There are some routers that have a few issue, but as yet I don't think transmit power is one of them - Wi-Fi transmit power is limited by law and most kit (phones, laptops, tablets, printers, Access Points, routers, etc. etc.) is and always has been at or very close to the permitted max. When IT professionals are choosing kit for big deployments, transit power is usually pretty low down the list of priorities because we know they are all pretty much the same - despite the BS the salesman is giving us.
Last edited: Oct 5, 2017

Totally agree. I have the old white Sky router with my broadband and it works perfectly in my house. Never misses a beat. Tried a Billion, Netgear and Apple as an experiment and they made no difference at all to performance either for LAN or WiFi. Lots of extra features for sure but I didn't need them so I'm happy. Lots of nonsense around which is why I'm not convinced by the repeater principal. Good tip on the channels, thanks
Sony 40HX753 LED, Denon X2400, Q Acoustics 7000i Speakers, Amazon Fire Cube 4k UHD, Olympus OMD E-M10 Mk II, Panasonic TZ25, Sony RX100
You must log in or register to reply here.