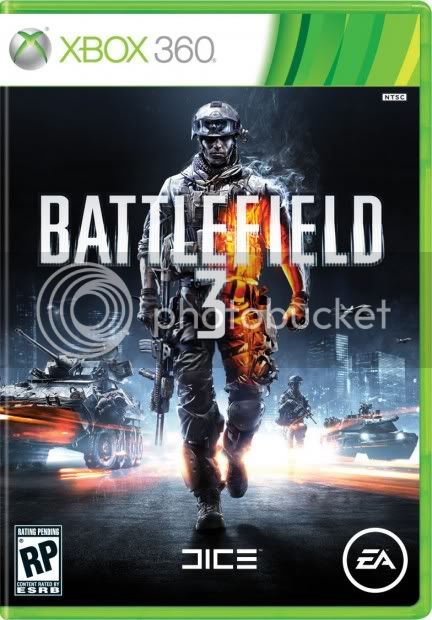 I really thought it would be pc only.

Here is proof its coming on console 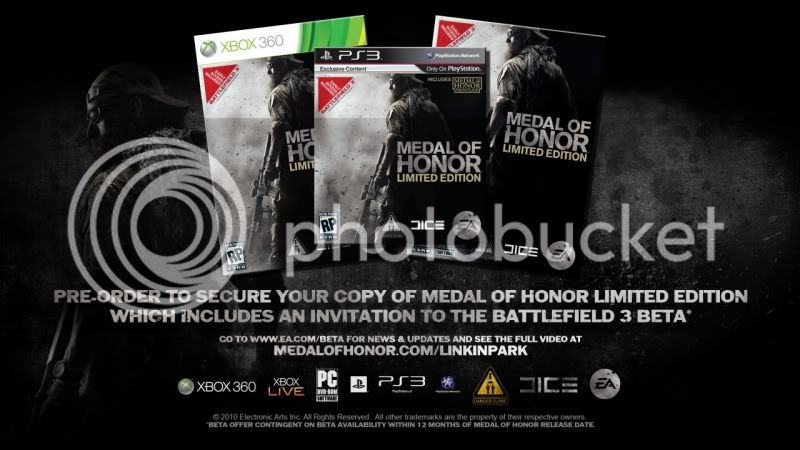 EA just announced that anyone who buys the Medal of Honor Limited Edition will receive access to the Battlefield 3 Multiplayer Beta. Currently, there are no details regarding the beta, or even Battlefield 3 itself.

Battlefield 3 is the latest entry in the award-winning shooter franchise from DICE in Stockholm, Sweden.

EA already has a page up on their website that has details on how to get into the beta. By the looks of it, the beta will be for the PS3, PC and Xbox 360 and will take place within 12 months of Medal of Honor's release date.

MoH could suck beyond belief but itd be worth it just for seeing what they've got instore for BF3. Used to live on BF2 when my old desktop could cope with it.
"If it doesn't matter who wins or loses, then why do they keep score?"

I played 1942 back in the day and i remember when the demo for bf2 came out all the download sites crashed LOL it was overload played road to roam and vietnam as well.
My Xbox one and Ps4 Gamertag Se777eN
LG OLED55B6V OLED HDR 4K Ultra HD| Xbox one X S|Playstation 4 pro| LucidSounds LS30 wireless| Sky Q |​

I have pre-ordered the Limited Edition now just in case they dont give it with the Tier 1 Edition. Good job GAME have both for the same price.

Cant miss out on this

Oh shnap! I never expected this, i thought they would continue with Bad Company as the console Battlefield.

Se777eN said:
Pc fan boys are kicking off big time LOL as they think they will get a console port i cant see it my self as they have been working on bf3 for 2-3 years all ready

I played 1942 back in the day and i remember when the demo for bf2 came out all the download sites crashed LOL it was overload played road to roam and vietnam as well.
Click to expand...

"If it doesn't matter who wins or loses, then why do they keep score?"

While I would love to buy BF3 for the PC, I feel I would need to buy a brand new PC for it. Because I remember when BF2 came out, and it made me buy a new system.

However I will be buying BF3 for the Xbox 360, as long as they don't bog it down. Because I always felt the console versions of Battlefield were not as good as BF2, that was until Bad Company 1 came out.
PSN: Pebb-- |XBL: Pebb| Origin: Pebbbb
Flickr | Twitch | YouTube: Pebb86​
G

Worse news ever for the best online gaming franchise ever!

I'll expect PC version first for this one, and a console release maybe after or near abouts

Definate upgrade of the PC for this one for me depending what scenario it is, a console version would just not cut it for me, didnt mind it with the others but not the most anticipated BF since BF2!

I think i will have to get this one for console however may have to get it for the pc2. I just dont get use same buzz or online expeience with pc on-line. Anyone else find this?
XBOX GT - L0FTY83
PSN - johnd83

They was some cracking mods for bf2 but they took 2 years to come out but its worth it.
My Xbox one and Ps4 Gamertag Se777eN
LG OLED55B6V OLED HDR 4K Ultra HD| Xbox one X S|Playstation 4 pro| LucidSounds LS30 wireless| Sky Q |​
G

Poised_Anomaly said:
I think i will have to get this one for console however may have to get it for the pc2. I just dont get use same buzz or online expeience with pc on-line. Anyone else find this?
Click to expand...

Nah fella, depends who you play with, I started of with BF1942 back in 2002, met a great bunch of guys (and some girls) and am still in daily contact via forums to date, best gaming experience I've ever had (Although FIFA10 with same clan members is catching up) been through the whole series with them, had own servers which I think is the key to a better experience, find a good un, and you wont look back.. the lack of keyboard and mouse and having the ability to admin your own server so as to eradicate tools is the only downside to console versions of this game to me albeit I've had a good go on the latter console versions but it will never be the same

Awesome! Just put in my pre order as well.
Do Unto Others Before They Do Unto Me!

Se777eN said:
They was some cracking mods for bf2 but they took 2 years to come out but its worth it.
Click to expand...

While it is good to see the team, that created the Desert Combat mod on BF1942 were brought by Dice a long time ago to help with BF2.

I still find it a little bit silly, that they let them go and create there own studio under THQ. Then again, Dice may of kept the best talent from Trauma Studios "Current Name: Kaos Studios" to help out on BF3.
PSN: Pebb-- |XBL: Pebb| Origin: Pebbbb
Flickr | Twitch | YouTube: Pebb86​

Will we need a new graphics card for this

Poised_Anomaly said:
Will we need a new graphics card for this

As there seems to be a bit of a crossover with people posting in here and the PC thread, I wanna paste what I said over there:

"Really looking forward to this, glad they finally confirmed it. I don't know why there's so many people who think it's gonna be the same game on consoles and pc, be it massive or tiny.

Firstly, this is mostly for people saying they will get it on xbox cause they don't have to upgrade. The 360 will be 6 to 6.5 years old by the time this comes out, how can you expect it to match the PC version in terms of graphics, map size, map content and player numbers?

Secondly, to the people who think it'll be a console port. Why would DICE do that and call it BF3? If that was the case, then it would just be pretty much Bad Company 3, not BF3. BF2 wasn't a console game ported to PC, it was ported to consoles.

Personally, I think we have 2 distinct series here, BC and BF. BC is a console game ported to PC, it's fairly small and is DICE's way into the console market. BF is a PC game ported to consoles, is massive and totally different to the likes of COD, MOH and BC.

The way I see it is MOH and COD are arcadey, fast and small games. BF is a tactical, slow, huge game. BC is kinda in between them both being tactical but small and fast. PC Battlefield is pretty much the Warcraft of FPS's, and comparing it to BC makes no sense, it's like comparing WoW to one of the many offline RPGs.

It was friends who introduced me to BF series way back in 05-06 with BF2 and since then i've bought into the franchise big time with a vet level of 8 showing on Bad Company 2.

Bad Company 2 has went very close to capturing the scale of BF2 conquest mode but there was nothing like 32 player or 64 player servers on BF2 to get the heart racing.

Time will tell how the console version shapes up but as many have eluded to it will probably be a slimmed down version with player cap and smaller maps compared to BF3 PC counterpart. But I play with same group of friends since we first bought N64s so I'll have to wait and see if we all decide to go PC/Xbox lol
HDTV Sony EX503 "40

Man i can't wait for the beta now i got my code i loved bf2 and i really hope this bf3 stands out its my shooter am really looking foward to next year!!
My Xbox one and Ps4 Gamertag Se777eN
LG OLED55B6V OLED HDR 4K Ultra HD| Xbox one X S|Playstation 4 pro| LucidSounds LS30 wireless| Sky Q |​

It would be if online shooters on pc werent riddled with wallhacks , aimbots , skincheats etc. I loved bf2 on pc but the cheatings just ridiculous so bought a laptop for browsing and stickig with the xbox.

Would be good though , hmmm if only.
"If it doesn't matter who wins or loses, then why do they keep score?"

So what does everyone think the setting will be ? Current warfare again, future or what I personally would like to see back to WW2 with 256 players.