Hi guys,
This is my first message about S.Sound, so please bear with me. I’m now a disabled pensioner, and end up watching more TV than I ever wanted to, so it needs to be great !

I will be replacing my LG 55OLED 930v shortly, & I am rethinking my TV requirements.
I’m getting a 65” OLED, possibly a Panasonic HZ2000 or similar - with Dolby Atmos. I didn’t look into Atmos because I didn’t know what it was. One of my previous TV’s (about 15 years ago) was a Toshiba 37” CRT with built-in surround sound,,,, & I got a bit spoilt.

My existing LG 55v930 (if I get it back – long story) obviously has no room for add-on amps. I had a cheap thing from Curry’s 20 years ago, which seemed ok,,,, just about ok. I was reluctantly going in for a reasonable A/V receiver for my new TV – but now: ATMOS !

I'd never heard of it, so it looked like I'd be delving into a separate AV receiver for my viewing pleasure.

I see most A/V receivers have several HDMI sockets: are they for the speakers, or inputs ?

Until recently, I thought the fibre connection was the way to go, but of course, I now know that HDMI is the bee's bendy bits.

Or, do I need specific Atmos speakers ? I know i'll need more, but trying to spread the costs.

What else would I need for Atmos ?
I have 4 satellite speakers from my old kit. Will they be ok to start with ? I have to watch the pennies a bit nowadays.

After looking at reasonable AV's, I came across SONY STR-DN1080 - 7.2ch at £429. I know it's cheap for the aficionados, but what do people think for a beginner ? Is there anything cheaper that's as good ? Is it worth throwing a few more quid at it for something ten times better ??
I'm in a rented bungalow, and sit cornerwise to watch TV. I don't think I can cut holes in the ceiling for speakers (or could I [rhet]), and even then they wouldn't be square in the room - and look messy.
I could put them high, or on the ceiling,,,,,,,,,

You really need to do a bit of homework yourself to understand all this, you could, for example, get Atmos on your current TV, you just need an Atmos capable soundbar or AVR and speakers and sources that have Atmos such as a suitable Netflix package or UHD discs. Note that you don't get Atmos on the BBC or Ch4 etc.

The TV you're looking at, the Panasonic HZ2000 has Atmos speakers built into it. The review of it on AVF gives it a great score for audio quality. 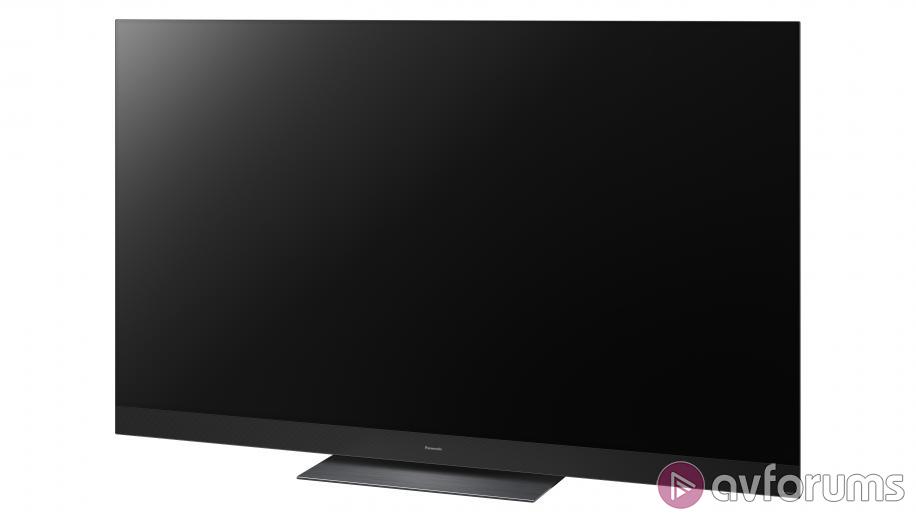 I've never heard it myself so I can't comment but it's at least worth trying it out to see how you get on before going down the rabbit hole of AVRs and speakers.

If you go down the path of external audio there are good soundbars out there from the likes of Sony, Smasung, Sonos, LG etc that do Atmos.
If you buy an AVR you'd need 7 speakers plus a sub. The ones you have are probably not suitable, we'd need more details to be sure, but you could actually damage the speakers and/or the AVR if they're some cheap speakers from a Home Theater in a Box package.
D

I just had a look at a review of the Panasonic HZ2000 TV, as I was puzzled as to how a TV can have atmos audio, and it actually has the speakers built into the TV itself:

the speaker array consists of an extensive ‘left-centre-right’ arrangement of three tweeters, six midrange drivers, four small woofers and a couple of passive radiators. In addition, there are two upward-firing full-range drivers to bring the necessary height and space to Atmos soundtracks. It’s an extremely thorough (and, at 140 watts, potent) audio system, even by flagship TV standards - and the facility to integrate an off-board subwoofer is welcome too

An upgrade to that would be to add the subwoofer.

Another upgrade would be to not use the speakers in the TV but have a soundbar instead.

Next step if you want even better than that, is an atmos enabled AVR and speakers all around the room, with the atmos ones on the ceiling, or aimed at the ceiling.

I now understand about the speakers, though I didn't know that using the wrong ones could actually cause damage ! I just assumed they wouldn't be good enough for the rest of the equipment.

Rambles:
I didn't realise it had all those speakers actually built-in.
Obviously not the greatest because of size restrictions, but I'm guessing I could just connect 7 appropriate speakers to the TV, & not bother with a separate ?!

transwest said:
Rambles:
I didn't realise it had all those speakers actually built-in.
Obviously not the greatest because of size restrictions, but I'm guessing I could just connect 7 appropriate speakers to the TV, & not bother with a separate ?!
Click to expand...

Unfortunately not - there is no option to connect speakers to the TV. The speakers are in the TV already.

transwest said:
Obviously not the greatest because of size restrictions, but I'm guessing I could just connect 7 appropriate speakers to the TV, & not bother with a separate ?!
Click to expand...

No, it doesn't work like that. You need amplification and power for the speakers and the TV doesn't supply that to external speakers. You'd need an AVR.

transwest said:
I know this is like asking a Rolls Royce driver his opinion of an old Cortina, what do you think about: SONY STR-DN1080 - 7.2ch at £429. I know it's cheap for the aficionados, but what do people think for a beginner ? Is there anything cheaper that's as good ? Is it worth throwing a few more quid at it for something ten times better ??
Click to expand...

You've been given good advice above and helped you understand that to get good audio and Atmos you will need a receiver and speakers in the correct position around the room. However we are getting a bit premature as the TVs position in the room is going to be key as to what type of speaker arrangement you can have.

Can you post a diagram or a photograph of your room. If you are going to have the TV central to the wall then that is a great position for a speaker set up. If you are in the corner of the room then that is going to be a real challenge and looking at the original post you mentioned sitting cornerwise. A lot now depends on your room.
'My opinions expressed here do not represent those of the AVForums or its associated websites'.

maybe a rough drawing,,,,,,, certainly not a photo.
For the moment I could put speakers high, or maybe 'on' the ceiling.
I realise it's not ideal, but then neither is my home at the moment.
Either side of the lines of sight are taken up by belongings, boxes, printers etc etc, which I didn't want to waste time 'drawing'!?
I can't move anything, so have to work around it - for the time being.

The room is hugely compromised imo, i'd probably stick with stereo or maybe even a soundbar

If the wall that the TV is currently on the 11'3'' wall then a 5.1 is easily possible. If you're not prepared to put the TV on that wall then I would go with a quality soundbar.
'My opinions expressed here do not represent those of the AVForums or its associated websites'.

Dasiz: Yes mate, I know that,,,, but when I win the lottery I'll have storage space for my gear - in the meantime,,,,,
Gibbsy: In theory I could put the TV on that wall - if I could find a very low bracket. The wall isn't that straight though, as it dips in about 6" opposite the door (I forgot to add it to my fabulous drawing).

Onto brands: There seem to be 4 or 5 items at this lower end - one of them being Onkyo. I have never used this brand, or know anyone that has. Yamaha keeps showing up also. I realise at this end of the market things won't be 'great', but I'm rekkoning on, 'good enough for me'.

After being spoilt by my Toshiba surround sound, I haven't come across a sound bar that gets anywhere even close to that.

transwest said:
After being spoilt by my Toshiba surround sound, I haven't come across a sound bar that gets anywhere even close to that.
Click to expand...

Newer soundbars can have separate speakers for rear surround sound and Atmos built into the front. They'll be far better than your speakers plugged into a TV.

7.1 plus 2/4 Atmos speakers is going to up your costs considerably. The more channels an AVR has, the more expensive it gets.

There's more to it than just more channels, but you can see how the costs increase.

transwest said:
Going back to my O.P, am I right in thinking I won't need an Atmos TV,,,, just a stereo one, as the A/V will be doing the work ?
Click to expand...

You're correct, you don't need a TV with loads of speakers, the AVR or soundbar does all the work.

The biggest problem though is your room layout. TV in the corner is far from ideal, hence the suggestions above that if you can't move your TV to a flat wall you'd currently be better off with a soundbar.

Cheers Bob,
They'll be far better than your speakers plugged into a TV:
I know that virtually anything is better than the TV Surround, but it was the first proper surround I'd heard - so bought.
Mind you, before that, I had (still have somewhere) an Akai VHS recorder with a built in amp for surround sound - probably not real surround, but it gave two speakers behind you. I was blown away when I heard someone behind me put a teaspoon into a saucer !?!? I had a flat wall behind me !

There's more to it than just more channels, but you can see how the costs increase:
I need to do a factory format of my head,,,, it's full of facts and figures that are crossing over each other ! I thought I'd seen a sub £500 kit that does 7.1.2. Now you've explained about the 5.1.2, I understand. That will suit me.

you don't need a TV with loads of speakers:
actually what I meant was, not the amount of speakers, but the 'ability' or 'amp' built in, for Atmos. For eg, my ex LG55OLED was only stereo. If I had known about Atmos then, could I have just connected an A/V to that ? I had been toying with the idea of an A/V for some time, but my health kept taking priority ! I obviously wasn't being pointed in the right direction, or i would have done it by now (and maybe know what I'm talking about ??!!)

The biggest problem though is your room layout:
I also realise the room isn't perfect,,,, or ideal,,,, or nearly close, but it's all I have.

Thanks to everybody for your inputs. I appreciate it all, and with your help, a great leap forward is iniment,,, imininent,,, inminent,,, just round the corner.

It seems everyone is sticking to the prices on these two items.

Hope you guys having better luck than me.

May 7, 2022
Danthecrawleyfan
D
E
Why Marantz and Denon only have Dolby Atmos in their 7+ Receivers?
2

What do u think about "object based audio" (atmos, dts:x)?
2