In April 2005 we moved house and the most obvious priority above all else was to get the plasma back up on the wall. Many weeks of planning began, seating position, lighting, storage and speaker positioning. At our old house we used Optimum glass stands for the AV equipment, even though they are beautiful looking stands I did not like to see the wires behind and also while watching movies etc the LED lights and displays of the equipment where a little distracting so I knew all AV gear had to be out of sight.
The main room measures 4.5m x 3.9m with a bay window at one end and a viewing distance of 3.2m from chimney breast to seating position. The house itself had not had much work done to it for the last 15 years so I knew a lot had to be done to bring it up to how we like our home to be.

Firstly, this is how the room looked on moving in day, cold Oak flooring, Yorkstone fireplace and wallpaper/ wall lights to die forNOT! This is not forgetting the DIY attempt at Artexing the ceiling. 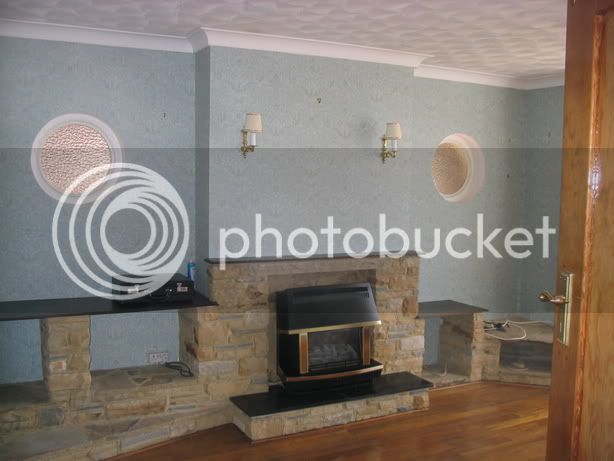 The fireplace was removed after many hours hard labour as behind the face stones was a dumping place for all waste building material. The porthole windows were then removed along with the gas fire and the remaining holes bricked up. An air brick sized hole was left in the chimney breast for ventilation. 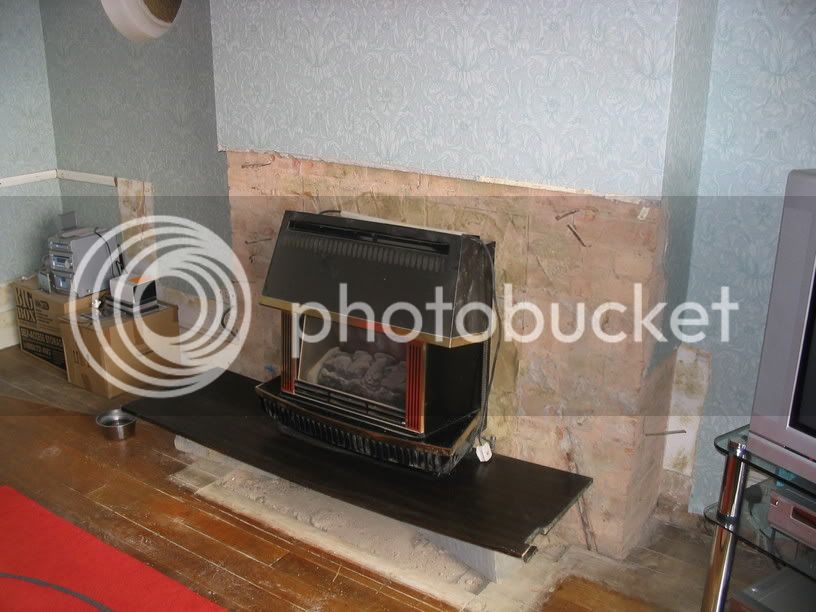 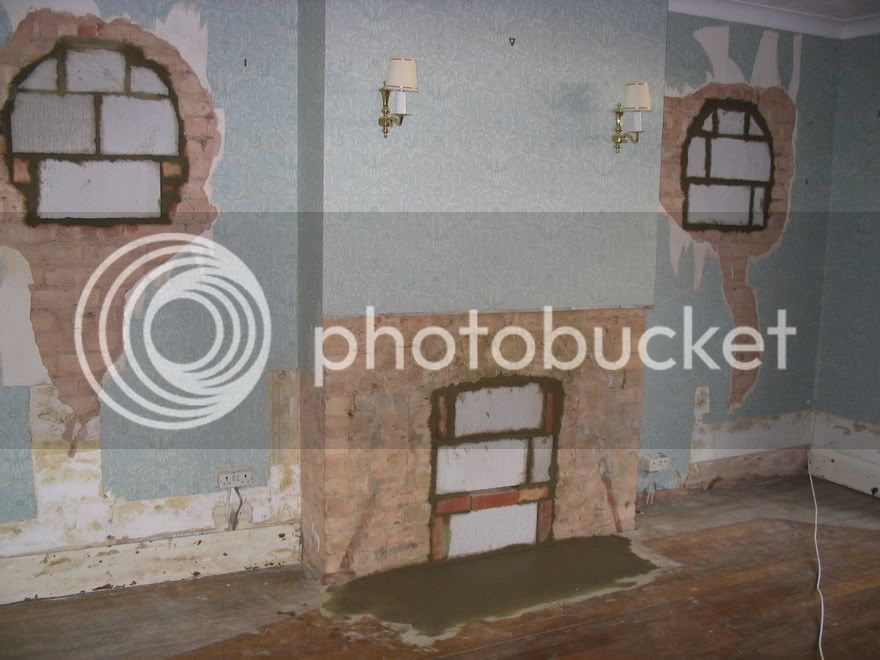 Next came my worst job, wallpaper stripping! It came off quite nicely but underneath the wallpaper the walls had been covered in a thin layer of Artex laid on smooth to hide the fact that the walls themselves were in a very poor condition. This had to be soaked off an area at a time and then scraped with a 3 scraping tool, it took a long time to say the least.

Next comes the interesting stuff, wiring not a problem for me as I have my own electrical contracting company, so this stage didnt take too long. The lights were planned to have 16 No 12V 50W downlights, switched in two banks of 8 by dimmers. We chose to put them in a rectangular pattern rather than two or three lines for a bit more interest. Many socket outlets were installed as you can never have too many. They were wired on their own ring final circuit so as to pick up as little as possible interference from fridge freezers/computers etc. Whilst wiring I installed a CAT5 cable to the AV storage area for possible future use with a media centre, and also one besides the sofa for the Laptop internet connection. High quality COAX was run to the loft for taking the SKY signal to a splitter box which could then be fed around the house for viewing/controlling in other rooms via I-Links. 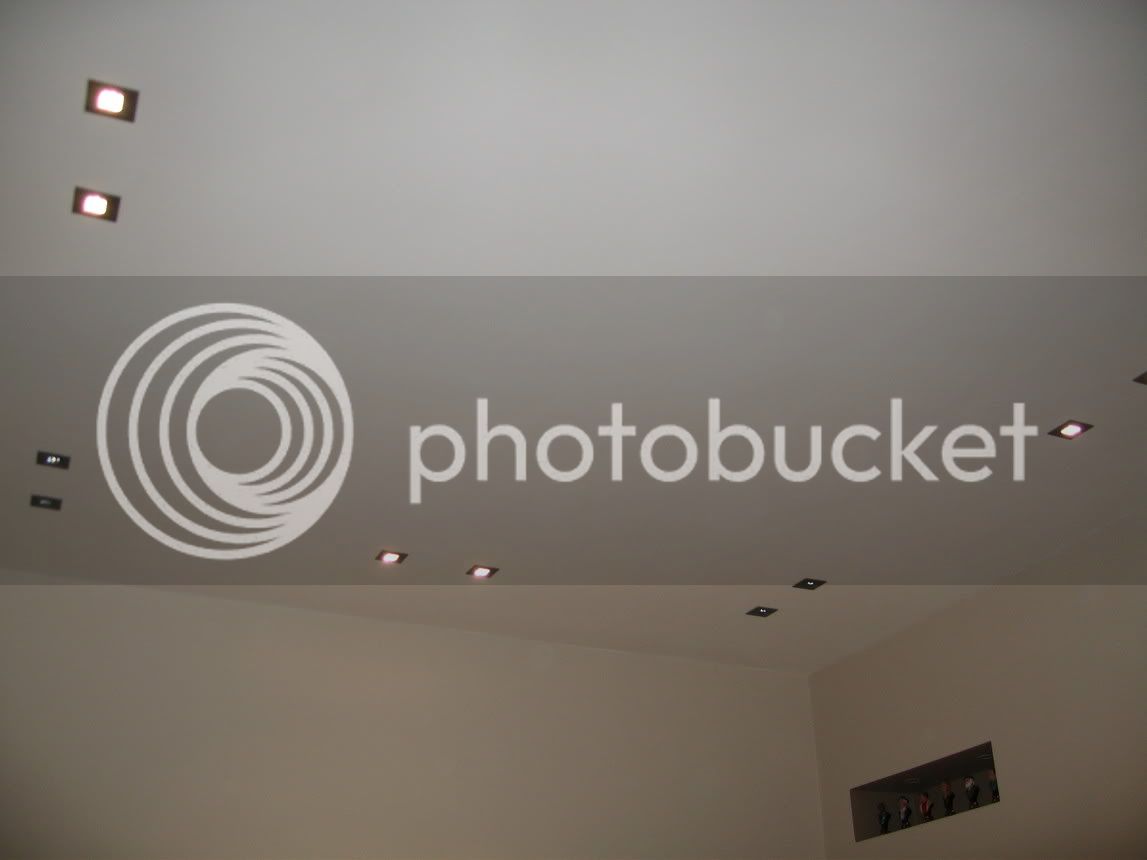 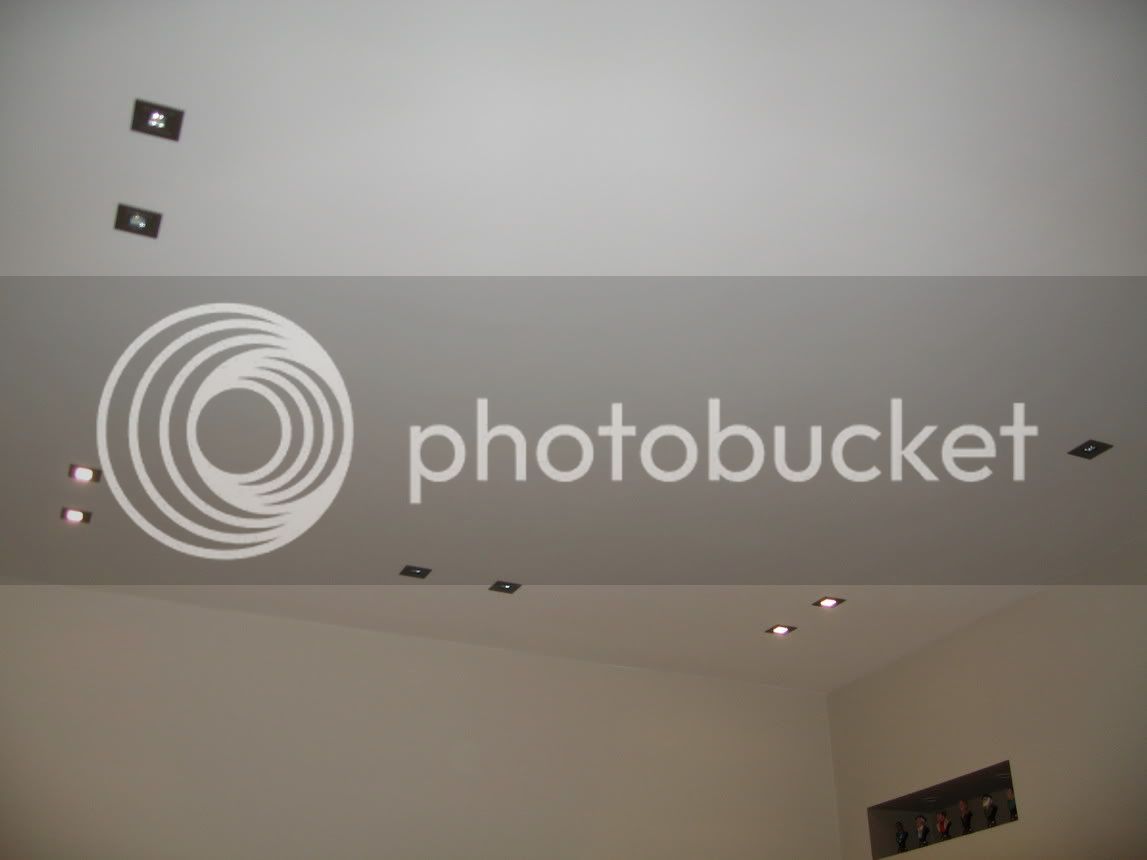 Missing a few pictures here of the room being plastered, but thats not a bad thing as the mess was incredible. The walls and ceiling were plastered and then mist coated to stop any peeling paint in the future. The alcoves were now ready for the framework for storage/display areas. 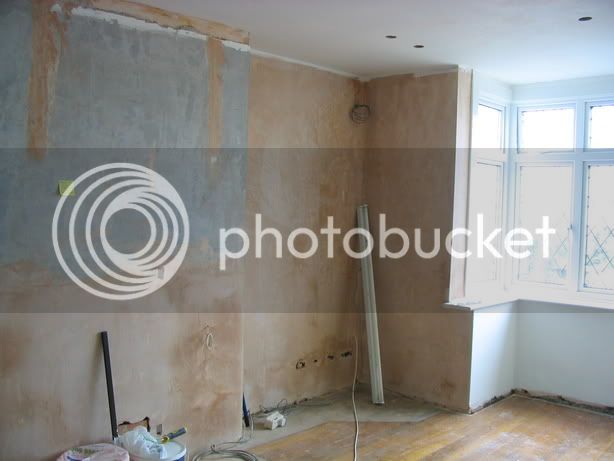 This stud work had to be perfectly plumb, level and square as the final finished look of the viewing wall would depend on my framework. This took a whole weekend to do with the left and right being done on separate days. The flat boarding is ¾ ply which would be a strong support for the plasma bracket. I did this rather than putting in vertical/horizontal studs as at this stage there was no way of knowing the exact positions of the fixings, so better to have a large area to fix to rather than a 2 strip of timber. 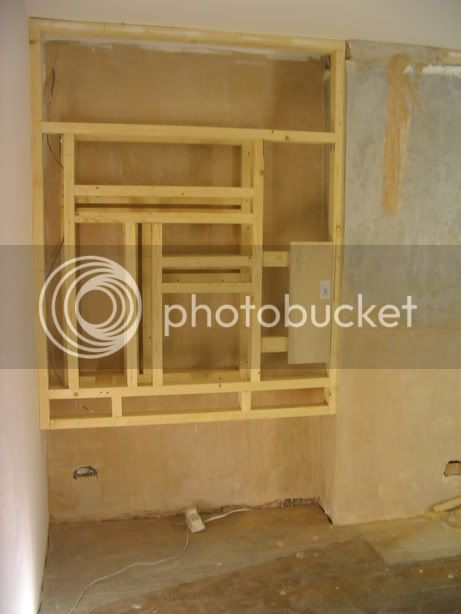 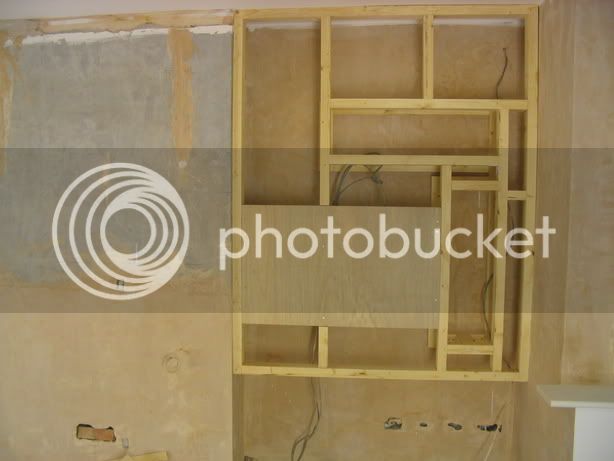 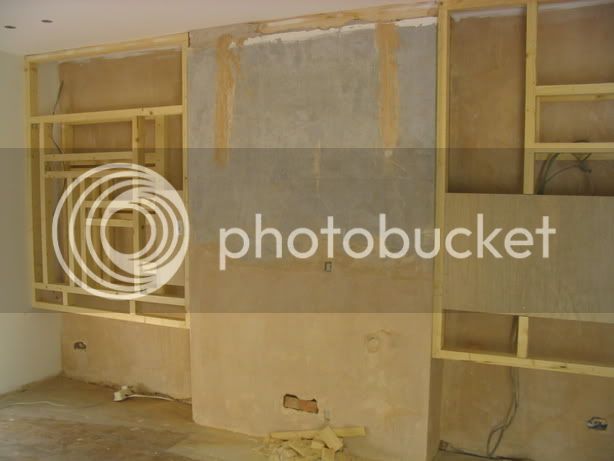 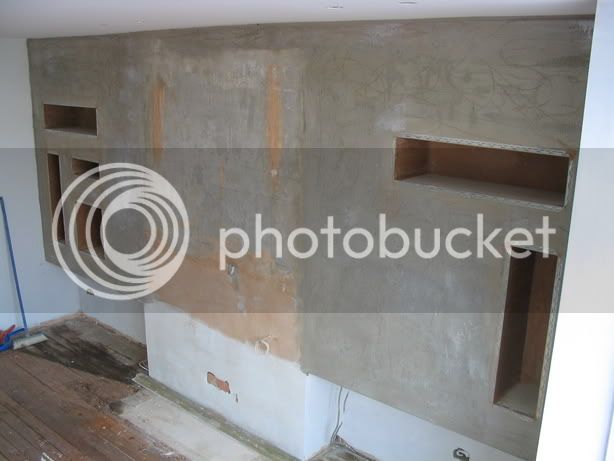 Once the finish coat was applied, the plaster was allowed to dry before the mist coat and top coats were applied. 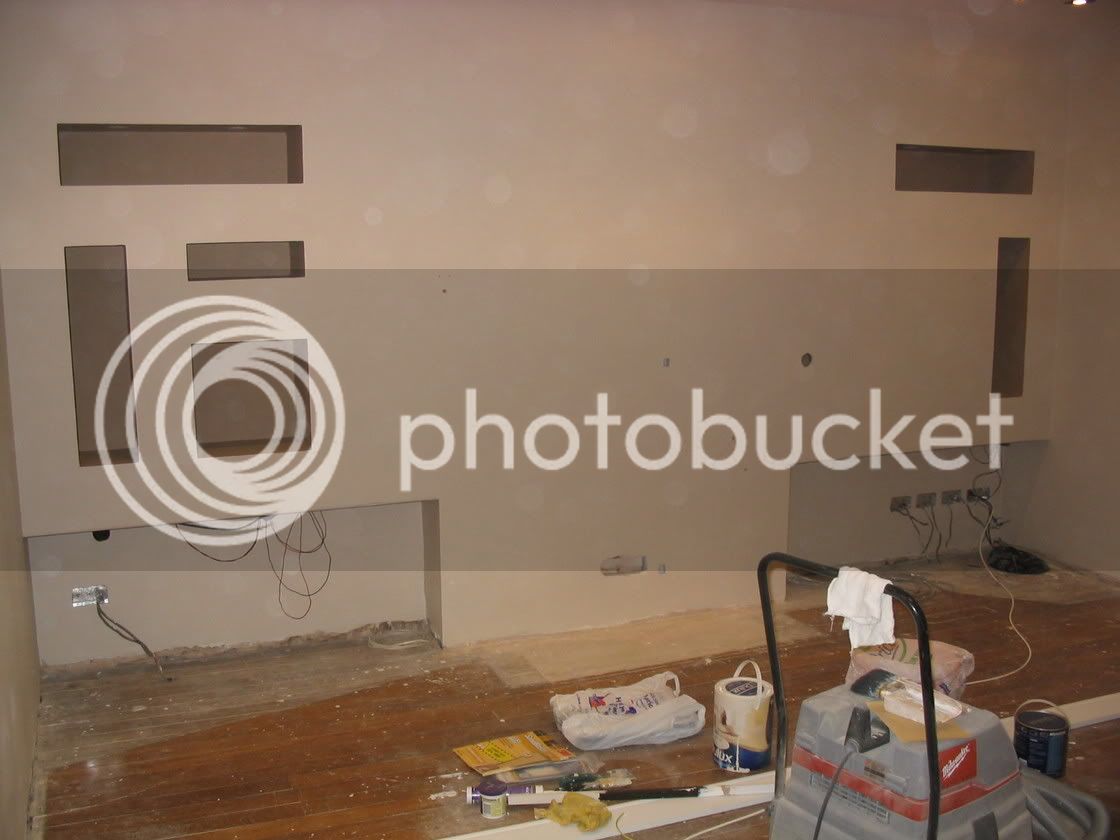 The display units to either side have white LED lighting installed, (shows up as a blueish colour). LED was chosen over halogen as it does not give off any heat which may discolour, or damage anything close to them. 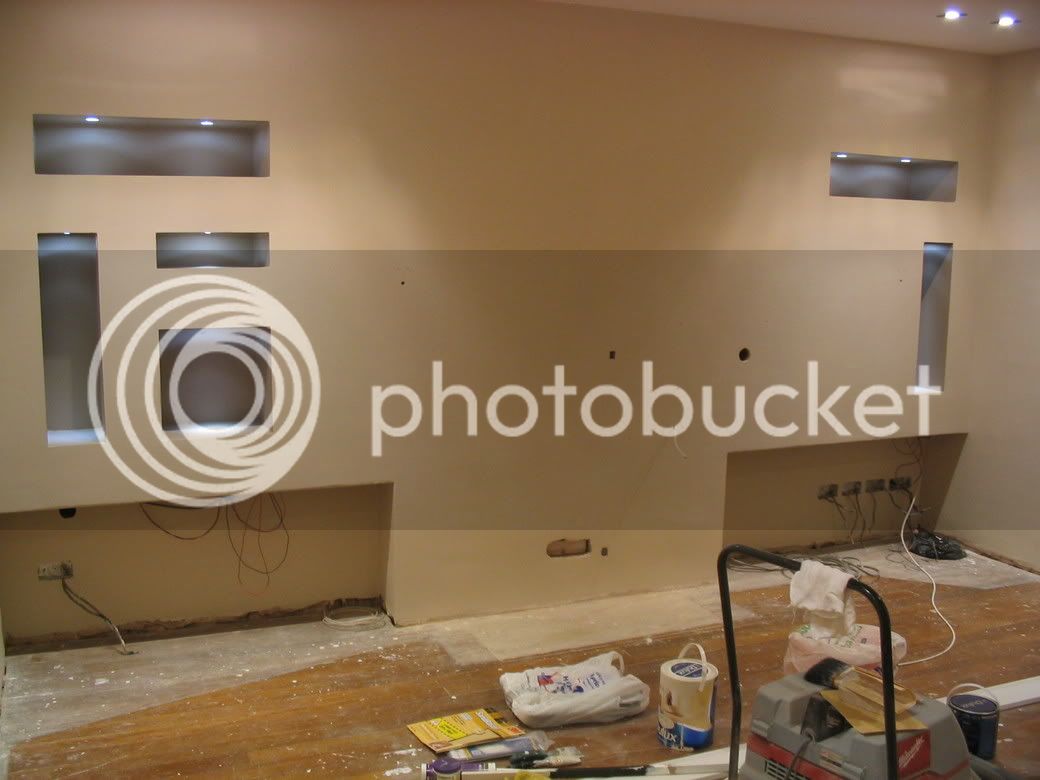 Around the room now the skirting board/architraves had to be installed. I used MDF as unlike wood you have no knots to seal and it does not shrink or twist. It also comes primed with just a light sanding required for undercoat and gloss. Two coats of gloss were applied as it gives the final finish that little bit extra shine. Some colour has also appeared on the walls, (DULUX Natural Hessian) 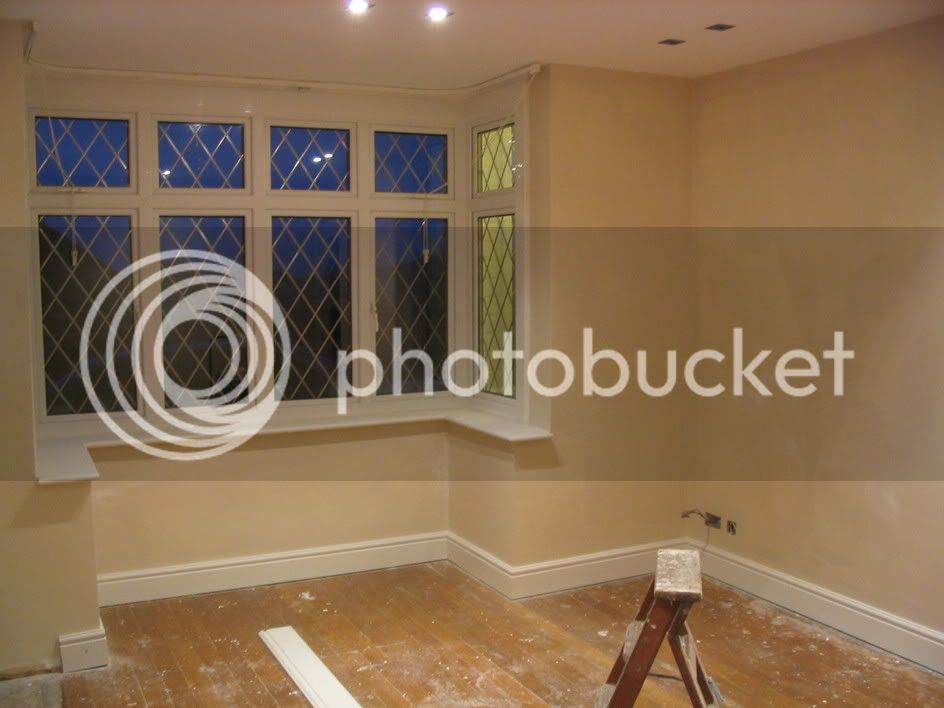 Another photo gap showing the cupboards being installed, probably as I was a bit stressed out getting them right. They were made by a local carpenter who measured them to fit but they still required a bit of time to get them level and correct. They were spray painted with an eggshell paint prior to installation. The finish on them is fantastic, they are so smooth. The spray company did an excellent job of colour matching the Dulux paint used on the walls. The top is Ash and I had this cut ready to be trimmed/scribed to fit at the final fitting stage, Ash was chosen as all doors and staircase in the house are to be made from this light coloured but hard wearing timber.
The screen and front speakers have now also been installed. 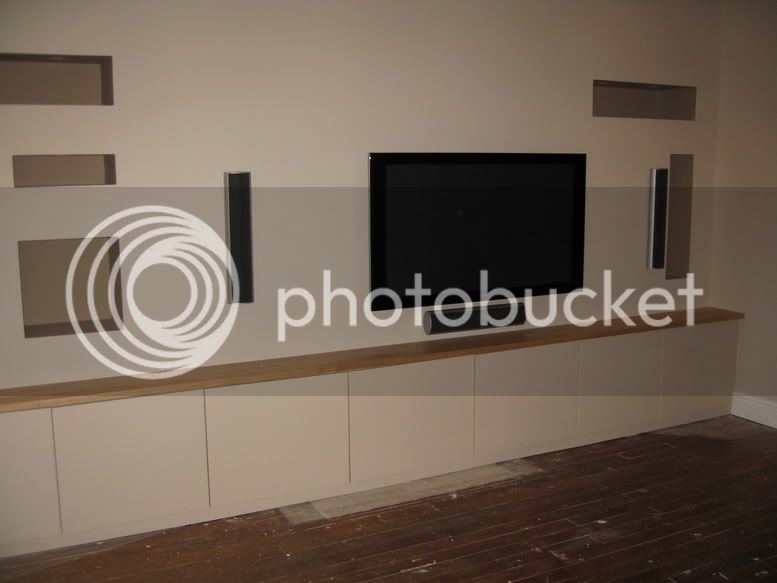 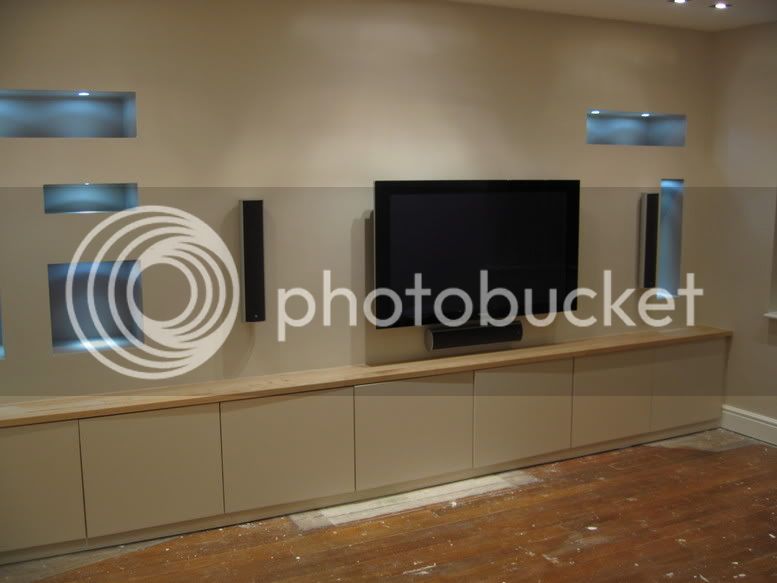 These next views show the left and right hand storage cupboards no carpet yet! (in first shot anyway) 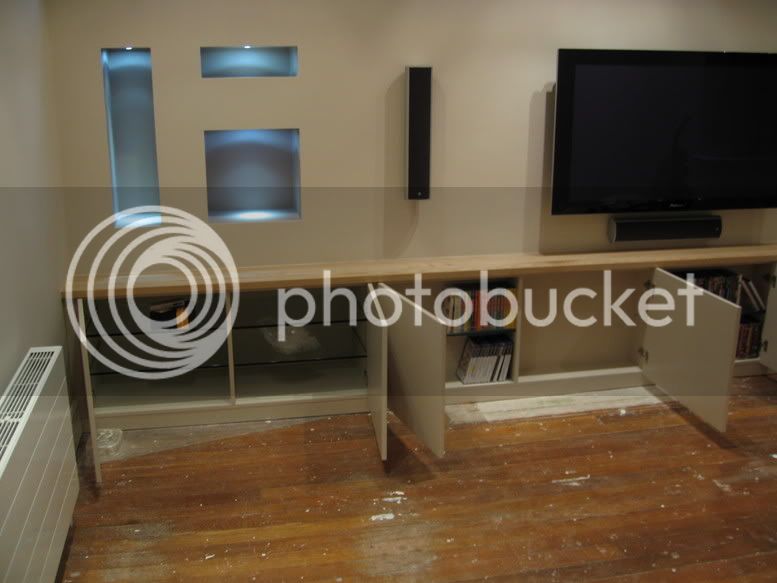 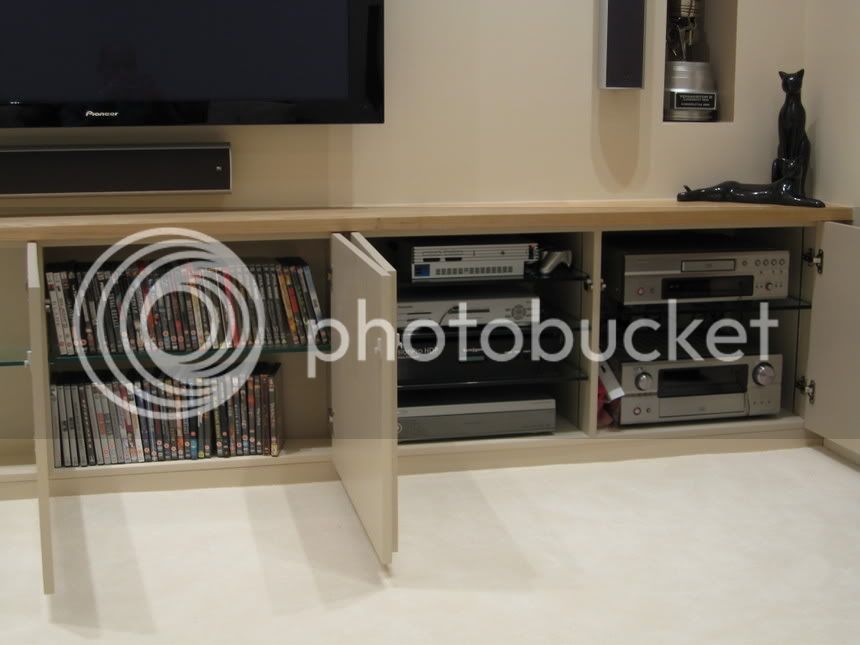 The carpet has now been fitted and Liam (Progressive AV) and Gordon Fraser have been round to install the Lumagen Pro HDP video processor, Philips Pronto RU980 with RF extender and to ISF calibrate the plasma, (many Thanks guys).

This is the view from the main seating position Lovely, even if I do say so myself. 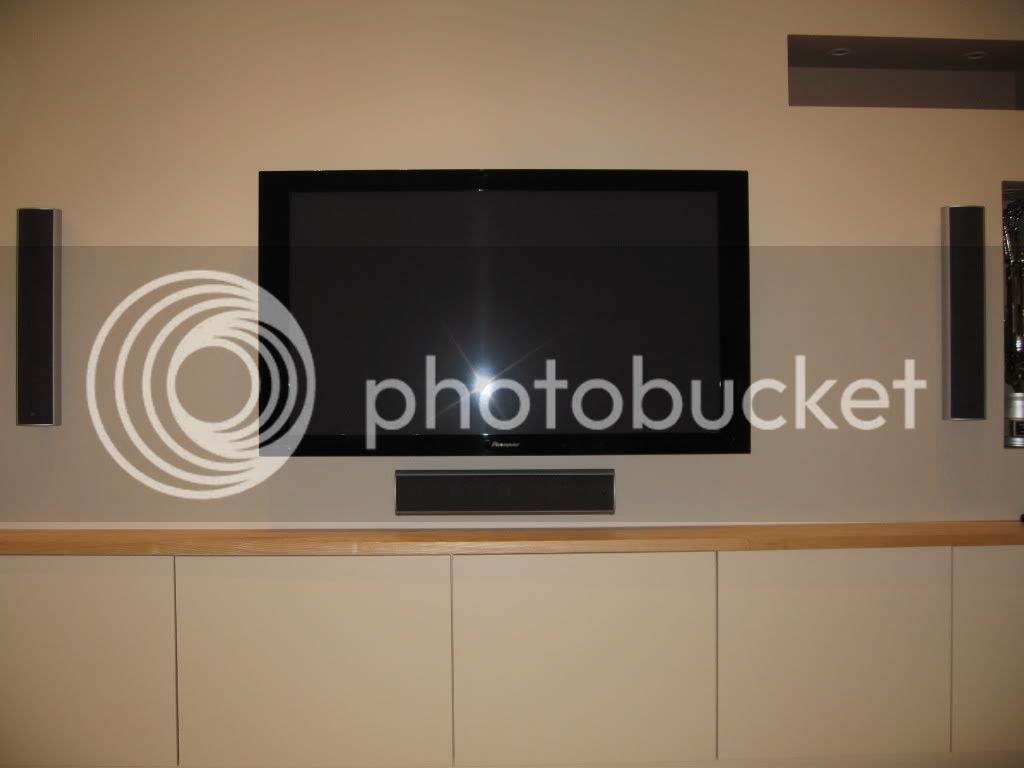 And this is the main seating position showing the rear speakers. In the New Year side tables are to be made in Ash to fit around the speaker stands. 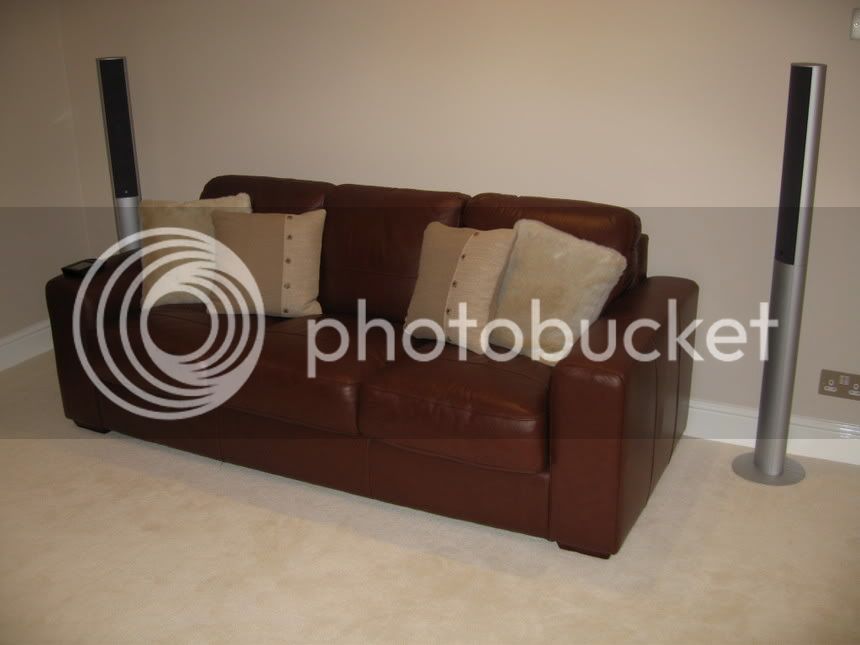 The curtains have been made by a local lady, (many thanks Irene), with black-out linings to cut out all light, this is because the window is South facing and gets a lot of sun. 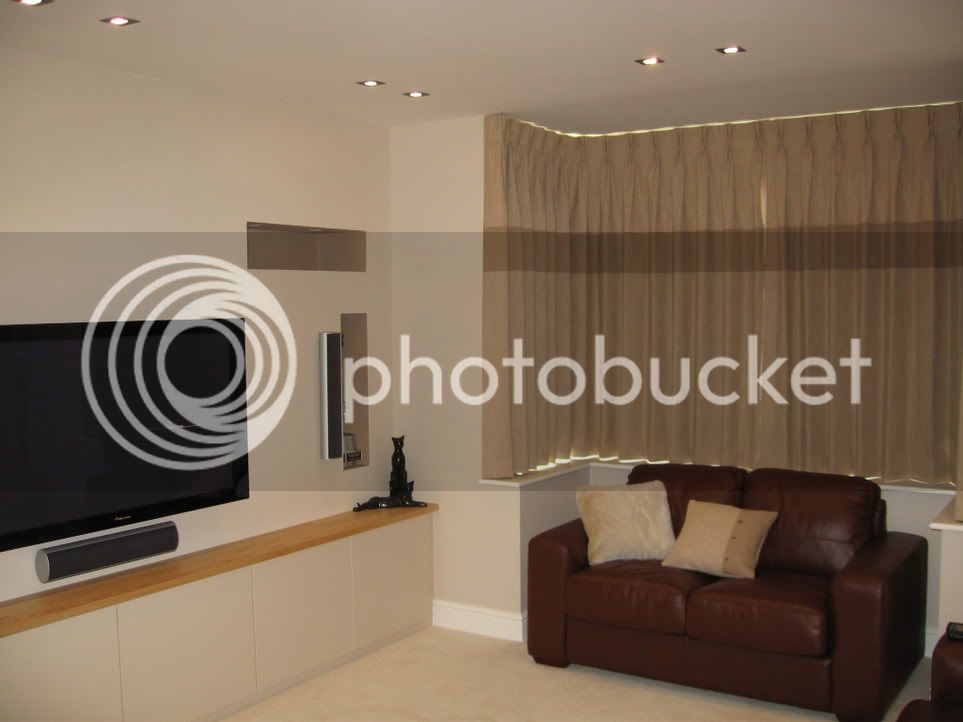 Hope you liked it and I have not bored you with my write up. If you have any questions feel free to ask.

Jesus that looks a thousand times better m8,great job.
@StanCollymore: Glory hunters, anyone can be one. Only success you'll ever be associated with.

Looks amazing mate. Don't suppose you fancy coming to mine and doing the same.
B

mhcq2002 said:
Looks amazing mate. Don't suppose you fancy coming to mine and doing the same.
Click to expand...

No problem if you can pay for my time and your not a million miles away from Brighton. I really enjoyed doing it and am thinking of doing AV rooms as a sideline to my current business.
L

Fantastic! I like everything. You have good taste in design. Is that a Denon AVR 4306 and a Denon DVD-A1XV?
Klipsch THX Ultra2 | Marantz | tangenAVdesign | Sony SXRD | Oppo | ViaBlue

Love it, my wall was done Natural Hessian as well! Why did you go for silk instead of matt, thats the one I chose.

Baldy that is a amazing room. The amount of work that has gone into it has paid off in what is one of the best looking rooms I have seen.

baldybonce said:
No problem if you can pay for my time and your not a million miles away from Brighton. I really enjoyed doing it and am thinking of doing AV rooms as a sideline to my current business.
Click to expand...

Watford so it's a little bit to far I think, lol. Seriously looks wicked. Have to get my arse in gear and get mine done.

You should be very pleased with the outcome (although I think that you can never have enough frosted glass portholes in a house ).

Have you considered anything above the radiator to acoustically balance the effect of the bay window & curtains? Where did you put the subwoofer?
"Using photos to judge the quality of a projected image is a bit like auditioning HiFi speakers over the phone." (Avi.)

And one more question, waht speakers are those you are using?

Excellent job the before and after pics really put it into perspective, it really does look now.
Visit my Home Cinema here

Thanks everyone for your kind comments, very much appreciated. Wife says I should do this as a business but not so sure!

Watford is not too far away, have a friend in your town and during the brighter months of the year travel up your way for car meets.

All paintwork is matt finish but the cabinets are sprayed with eggshell in exact colour match to walls. Eggshell is harder wearing than matt or silk and is easy wipe clean too which is quite important when you have to touch doors to open them.
The speakers are KEF 6000 Ace, they give IMO an excellent sound, large and full but with excellent clarity too. I was really impressed with them on demo and feel they sound as good if not better than the Quad 11L/ 21L/ centre which I still have... ready for the next room in a future extension over the garage, (projector room for that special movie watching).

Your right the room is lacking bits for balance. Some artwork is planned for above the rad and sofa, and will hopefully be sorted soon. The sub is in the corner as shown in picture. The cupboard it blocks is to be used for things we dont need very often so no need to keep opening it. 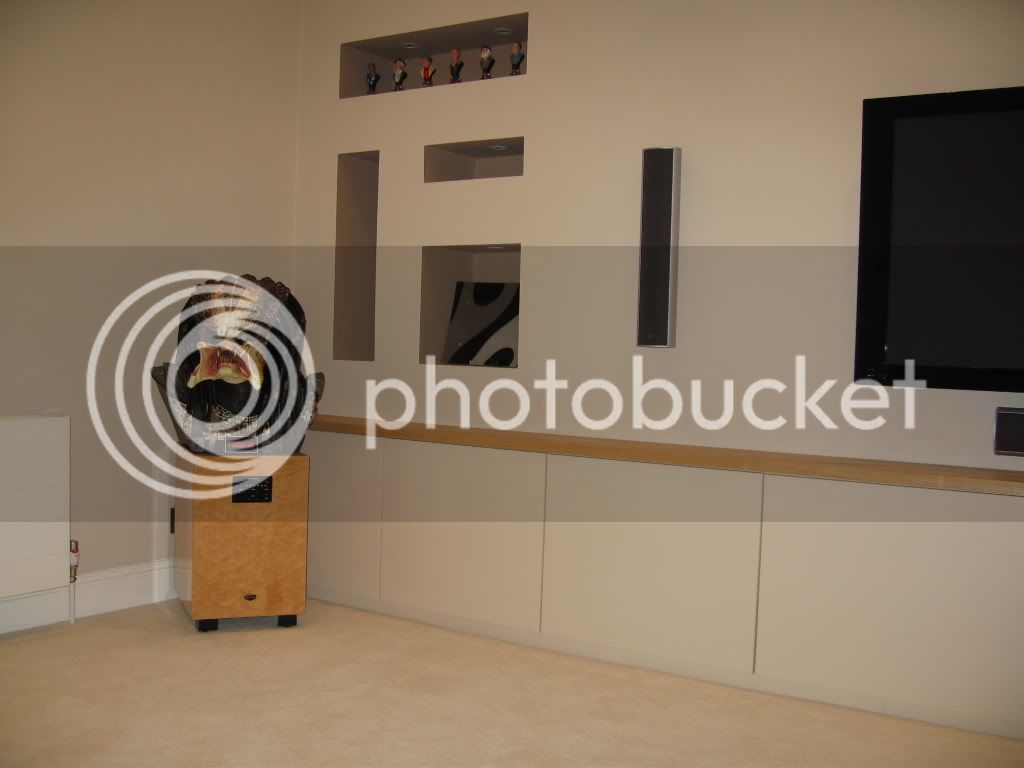 Cheers mate, hows that DVD player doing, not that you have probably got anything to play anything on it after selling most of your collection...

Traded it for a Pioneer 868 to match an AX5ai Pioneer amp. Have to say that both the denon amp and dvd deck were/are superior prouducts, espcially when listening to music.

Are they bespoke cabinets made somewhere or did you knock them up. I would suggest that your wife is correct. This is class, pure and simple.

Captain Benefit said:
Traded it for a Pioneer 868 to match an AX5ai Pioneer amp. Have to say that both the denon amp and dvd deck were/are superior prouducts, espcially when listening to music.

Are they bespoke cabinets made somewhere or did you knock them up. I would suggest that your wife is correct. This is class, pure and simple.

Cabinets were made by a local carpenter/joiner and made to fit the space available.

Absoolute class mate! That is right up my street! Very nice indeed , you must be chuffed to bits

Thanks for the reply! What kind of artwork you going for? YOu might be intrested in this, or maybe not: http://www.avforums.com/forums/showthread.php?t=289092