Just moved into the new house and now need to choose a new AV setup for the living room.

I currently have Pioneer VSX LX303 with 5.1 Yamaha speaker set. Originally was thinking about the new set of speakers but my living room is an open space and there is no easy way to lead the cables to connect the satellites. Also, I would like to extend the speakers to include atmos but won't be able to place them in the ceiling so it's only the case of the up-firing ones at the moment. I’ve started digging around and Bluetooth sounds bars caught my attention. Especially Samsung Q950A which sounds like a reasonable alternative to avoid cable mess and it also supports atmos with its up-firing speakers. Since I need to buy a new tv anyway I can get one from Samsung so it supports Q-Symphony and it should all work together well.

The additional advantage of the soundbar would be the fact that I don’t need to worry about the proper place for front speakers and simply mount the soundbar below my TV. With the plan I have for the media wall it will be difficult to place floor-standing towers.
Setup will be for movies only as I use Sonos hooked up to Spotify for music anyway.

I've attached layout of my living room. As you can see one side is completely open which definitely don’t help the acoustics. Not sure what would perform better in this layout. Proper AV will always give better results but I’m no audiophile and I won't hear the difference. Also looking around if I want proper speakers setup with atmos then it will come much more than, hugely overpriced Q950A anyway.

Or am I missing a better solution out there?
Any suggestions welcome
thanks Ideally you would move everything little bit toward right side if possible. You should consider at least moving the main couch opposite to tv closer as you don´t want to sit too close to rear wall if not required and also you want to sit closer to tv unless you have 90" big one there plus the fact that the atmos bouncing effects are typically best at 3meters or closer (speaker to listener). So assuming you would sit 4,5meters away and buy soundbar i feel it would go quite waste as the sweet spot for overhead effects is not there it is closer and lastly sitting such far away from tiny soundbar in general (even without atmos modules) is very questionable.

"Proper AV will always give better results but I’m no audiophile and I won't hear the difference. "

Of course you would hear difference with better speakers and real subwoofer that can bring the grunt and make the system sound even larger. You have quite decent receiver which supports most of new stuff. It`s the Yamaha speakers that i`m worried about. Their "cinema" speakers are usually total crap just like their subwoofers. I mean the cheap packages.

If you buy some modern speaker system it can be 3.1 / 3.1.2 (upfiring modules) so if you feel pulling the speaker wires for "rears" is painfull then don`t do it. I would gladly run some 3.1 decent system with bookshelf speakers or floorstanders, center channel and quality subwoofer over the expensive soundbar. 2.1 is option too, won´t be as immersive experience but otherwise better in many areas.

Another way to achieve atmos rig would be to mount speakers high up on front wall just below ceiling. If you buy the angled ones they will shoot downward toward listeners. You would set them as front heights. Example below picture has white Dali Alteco C1 high up on front wall for a 5.1.2 system. Most of members here prefers this over the upfiring bounce type. 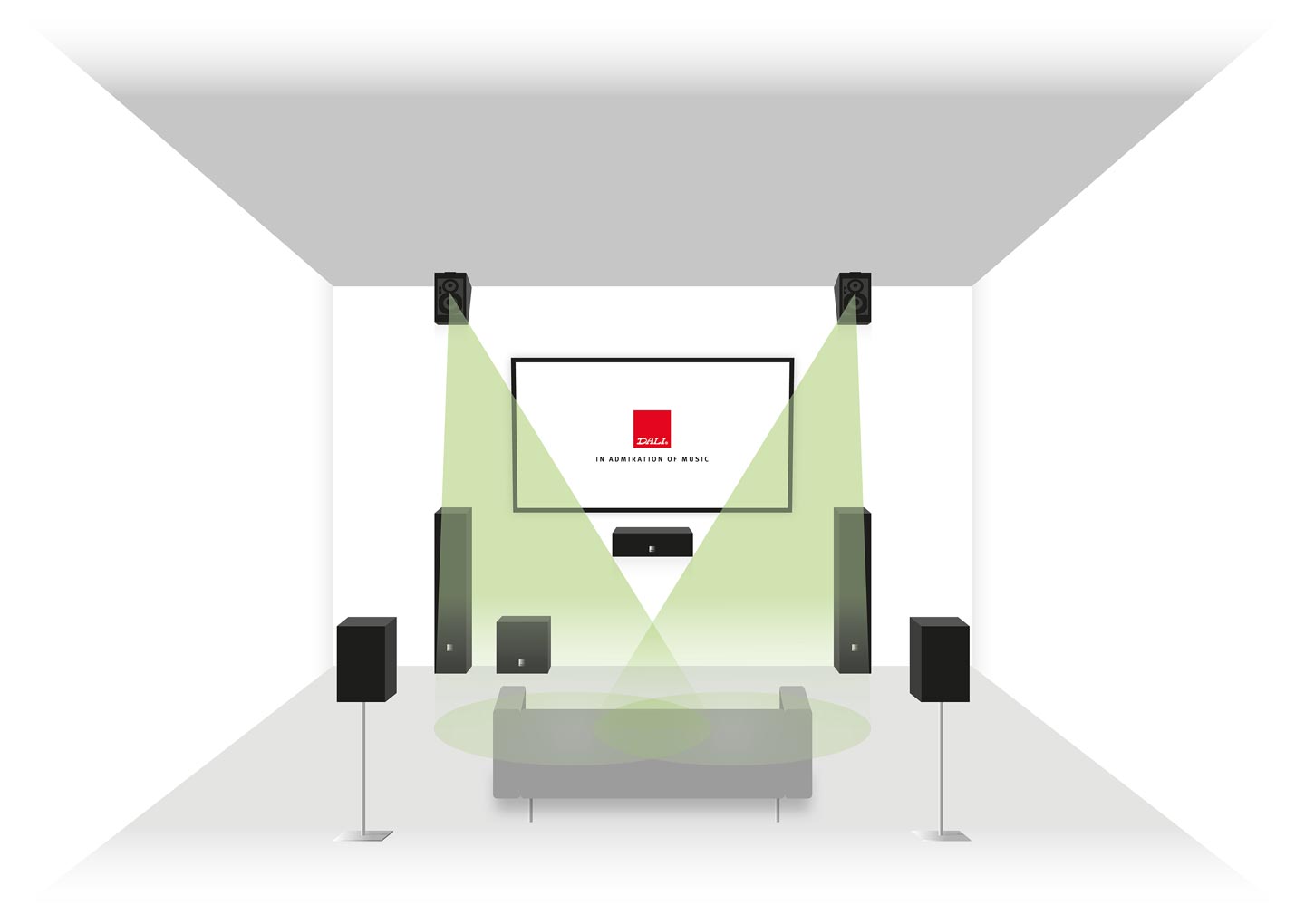 The main couch will be probably half a meter from the left wall. The reason why I don't want to move it too far right is that I have a large panoramic window with nice view of the garden which I don't want to spoil.
TV at the moment is 65" but it will be replaced with 85" to suite the distance.
The speakers I have from Yamaha at the moment will be replaced for sure as they're not the best.
if I decide to go into speaker set then I will need to lead the cables to the back of the couch as I definately want the surround. I will be putting coving in so it can be used to hide the cables. a little extra work but definately doable.
What I'm mostly worried about is that there is no good space for the tower speakers on the front.
As you can see from the sketch TV will be pretty much one side against the wall so right speaker will be cramped in the corner. Definately not good for acoustics. Also I'm building media wall which will look like the attached design. As you can see there is very little space left fort the floor standing speakers. Might be able to squeeze the book shelf speakers there. But again not sure if the location makes sense due to disctance to the back wall.

Some narrow floorstanders (Monitor Audio Bronze 200/Silver 200/Dali Oberon 5 etc) could work, but it would be same as with standmount speakers (with stands) you should push them forward more in to the room if possible, so one speaker isn´t directly in corner. If you choose av-receiver wisely the built in room correction can help you flattening the bass response, the boost you get from walls. Also you aren´t driving the towers full range with a subwoofer in the system, but for many the floorstanders are question of better looks. You need speaker stands with the bookshelf speakers and they take similar floorspace. However i`m not sure would you be willing to bring the both front speakers little bit more in to room ~20-30cm forward? As you have the media wall it makes everything bit trickier. Also if the center channel goes too low and the 4,5m distance can be problematic, keep in mind that 60-70% of movies sountrack comes from center channel so you should put big effort to optimize the placement. Easier said than done, i know.

I still don`t like the idea that the main couch would be so far away from tv. Bring it as close as possible to tv while you get the view you want from windows. Optimal watching distance for 4K 85" tv is 7.1 - 10.6 feet so sitting closer wouldn´t be issue either, quite the opposite it would feel more immersive closer. Curious will you hear the speech clearly and as you turn up the volume will wife be screaming to turn it down when action starts. There is certain modes in av-receivers to help with this though, at least for late night viewing.

For the rears you can mount some effect speakers on the rear walls aimed toward listeners. Won`t be most optimal, but many people would still take it as you have effects flying around so it`s not just coming from front.

Another consideration is subwoofer(s) and placement as that can make big difference. In your case with the media wall sub would go to right side of it which is quite bass light location plus being 4.5m further away from listeners, not really ideal. You also aren´t likely looking to buy large sized box so the left corner would have been ideal as there is benefits corner loading subwoofer. If that doesn´t work out i might try subwoofer at the rear wall/corner / close to couch if wife accepts that. There is wife friendly choices regarding the finish options, but as always depends very much of budget and size requirements.
G

new furniture should arrive in the next few weeks (finally!) so I will be able to play with the placement a bit. it will give me more clarity on the distances and where speakers can be placed. I'm not worried about the rear ones as there will be some space behind the couch for sure. its the front I'm mostly worried about. I know ideally, speakers would be slightly to the front but realistically speaking I can't see it working out well in this setup. I still have my old floor standers so when all the furniture is in I will move it around and see how it fits.
while saying that I wonder how system like sony HT A9 would work in this layout, so far heard all the praise but I'm quite sceptic
You must log in or register to reply here.

I
Dolby Atmos TV with soundbar