and so it begins!

Just bought and moved into my new house with our 6month old new bambino!

Well after much, much reading on this and many other AV FORUMS threads Im going to start my first my telly install.

The missus has let me have the front room as my play pen! I want to install my (great at the time but now old) 32 LG LCD on the chimney breast. I want to build it out a bit for the same look as elootos. That flush to the wall look with the nice wee LEDs behind. Im going to remove the fire and build a sort of AV rack to house my gear  If you can call it that, HAHA! So Im going to knock some stuff away and build it up again with timber and plaster board for a similar look.

I was going to put a conduit / guttering up the chimney and out of the wall to house the cables and allow future cables to get in and out easily  something like this - http://www.avforums.com/forums/showthread.php?t=436458

I have Virgin (normal scart) a PS3 and my Laptop that Id like to have connected together into the LG. First off do I need to do anything to the chimney breast  Ive heard stuff about venting, but Im not 100% sure??? Im also splitting the PS3 into the living room telly - My new 40 1080p Bravia!

My laptop (which I plan to upgrade to a HTPC when the budget will allow) looks like it has an S Video and a normal VGA. As I only want the lappy to the TV for the odd bit of surfing (wireless keyboard and mouse) and watch the odd downloaded flick. Whats the best way to get this connected with pics and sound???

Id also like to put in some sort of sound system (again, within budget aka cheapo) that will let me listen to audio through the PS3, laptop, virgin and TV. Would one off those DVD home cinema systems work???? Or any suggestions???

I think thats it for now. No doubt Ill think of a thousand things to ask once I post this.

And finally, thanks for taking the time to read my over elaborate thread and making your suggestions! 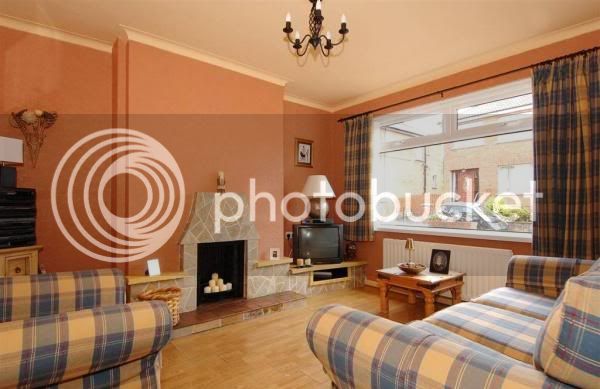 Hi geo99, glad you found the threads useful, but I can't take credit for the brush faceplates, someone else found those (can't remember who), I just used them!

- First off, I think you do normally put some sort of vent in, but I don't know more than that. If you don't get an answer here, maybe try diynot.com

I was going to put a conduit / guttering up the chimney and out of the wall to house the cables and allow future cables to get in and out easily
Click to expand...

- well, that will certainly allow you to put in whatever cables you need. Think about each of your sources, and how you will get both video and sound from them. HDMI sources are fairly straightforward, certainly the PS3, as this outputs both over the HDMI cable.
Your Virgin box's scart output also carries sound, so that goes to your tv too.
Laptop is a bit trickier I think, as neither S-video or vga carry sound. I suspect your tv will have a pair of stereo input jacks, so cable back from these to your laptop, with a suitable connector on the laptop end. I believe vga is the best video option, as it supports HD, but I don't know much about PCs.

I'd also like to put in some sort of sound system (again, within budget aka cheapo) that will let me listen to audio through the PS3, laptop, virgin and TV. Would one off those DVD home cinema systems work???? Or any suggestions???
Click to expand...

- I don't think I would suggest this as the way to go. They tend not to have a lot of inputs on them, and you need something that all your sources can connect into. If you think about it, if you want an alternative sound other than the tv speakers, then you need to take an output from each source, and put this through your sound system.

I'd suggest you look in the classifieds and get yourself a used home cinema amp. You can get some nice kit for not very much money. Inputs?
Virgin box - only a pair of stereo outputs (I presume), connected to a pair of stereo inputs on the amp.
PS3 - Digital optical for full 5.1, both for games AND for DVD and BluRay (but not HD sound, but that isn't an issue for your budget setup).
Laptop - Another digital optical, again giving 5.1 (the amp will usually have more than one optical input)

Speakers - Again, I'd try second hand, there are some real bargains.

Thanks for the reply mate!

I knew i'd seen the brush faceplates somewhere else aswell but i liked your overall set up and the way you'd used them.

And your setup has been great to nick idea's from aswell! oh and the bar ain't half bad either!!!!! haha

Yeah mate, I think a budget amp is the way to go! I'll keep an eye on the classifeds!

a bit of an update!

I'm waiting for a plasterer and I need to find one asap as i'm getting a new sofa next week and the coving needs to be put on, paint the walls, lay a new floor all before this time next week!!!!!

anyway have a look - 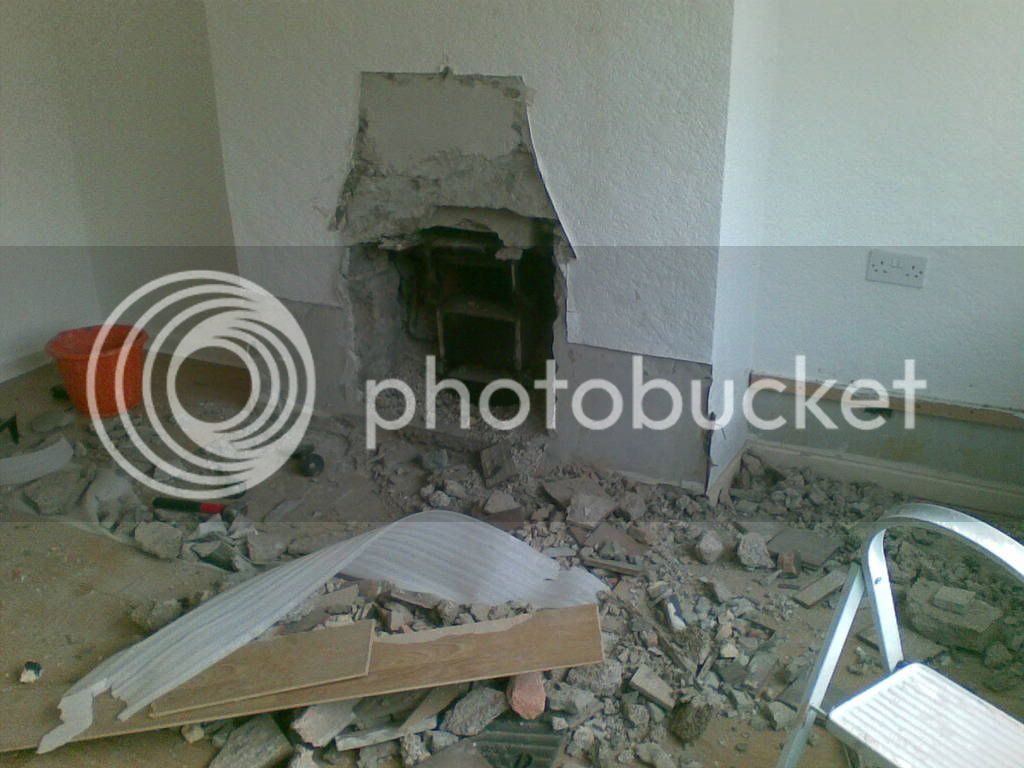 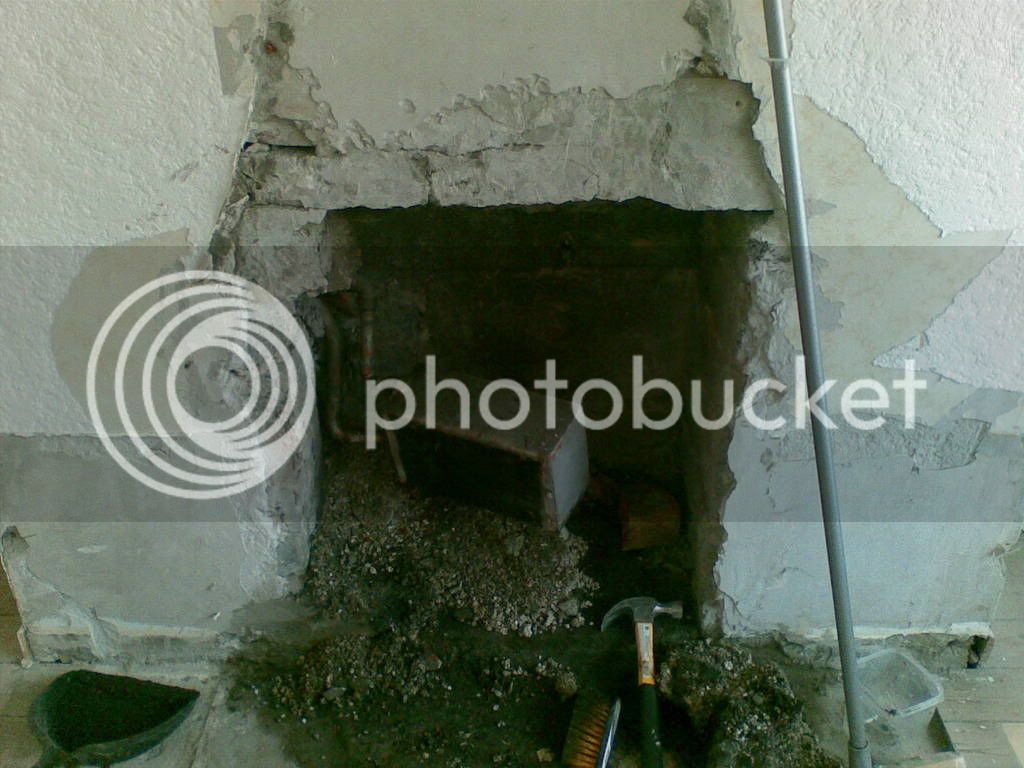 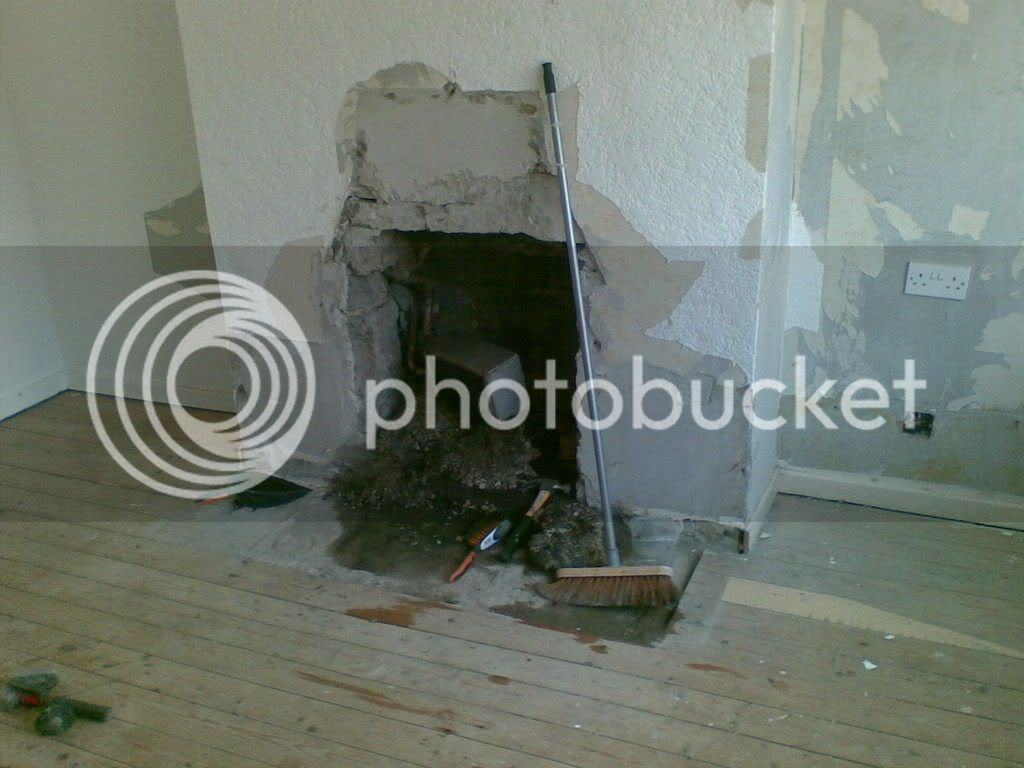 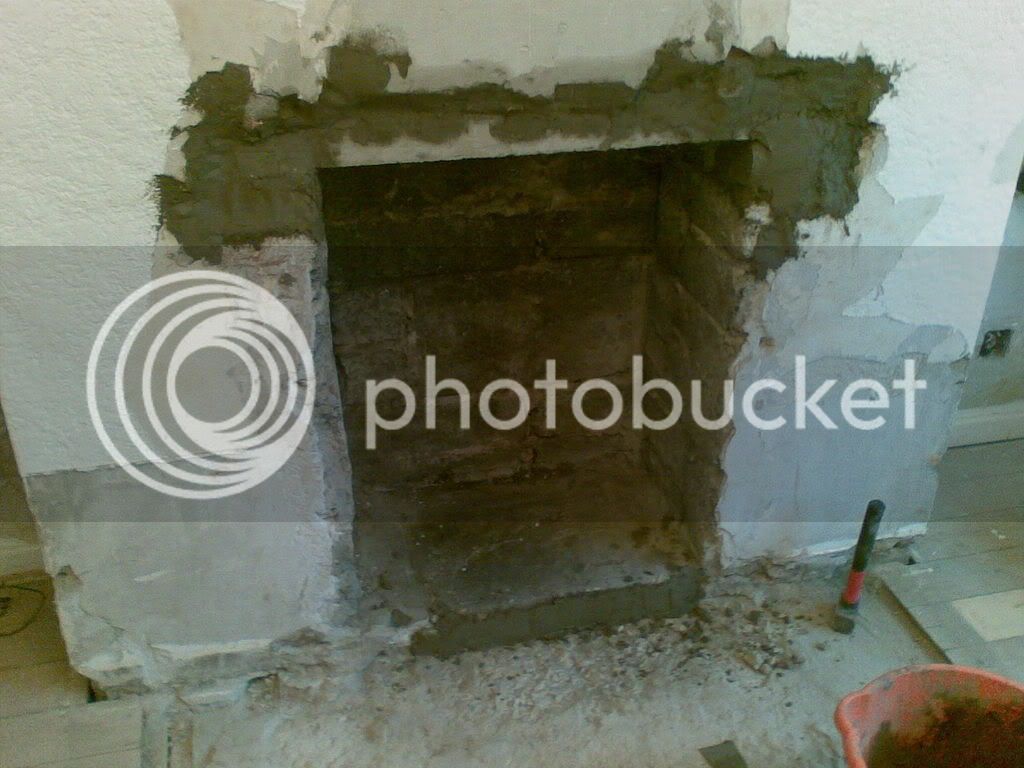 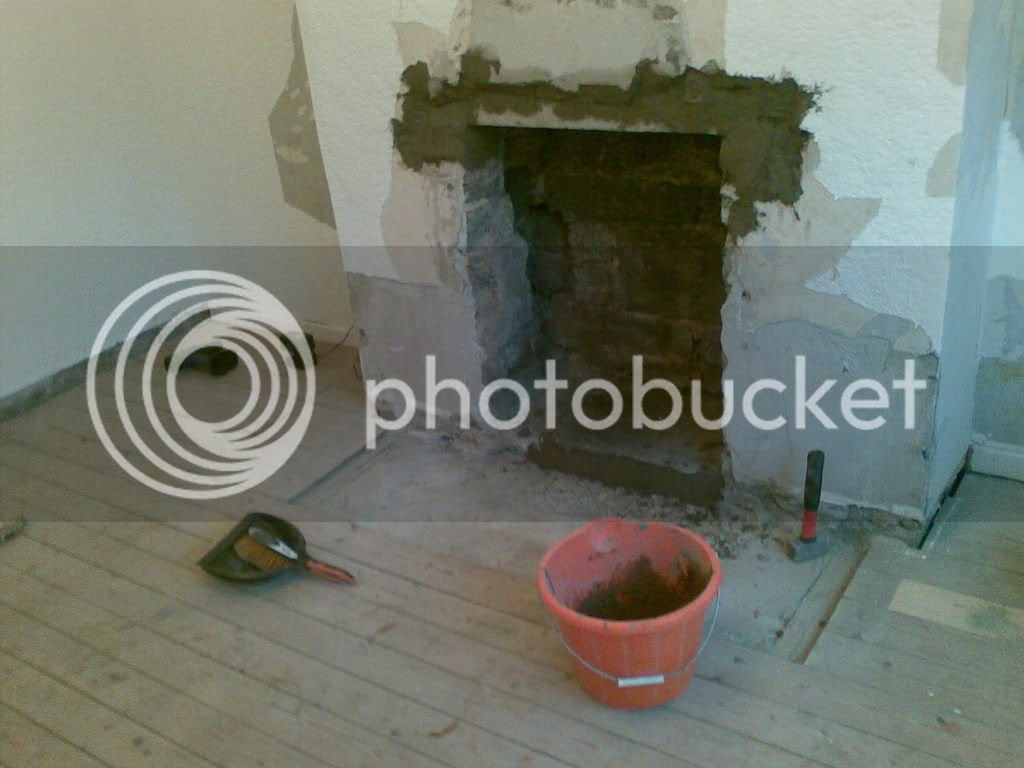 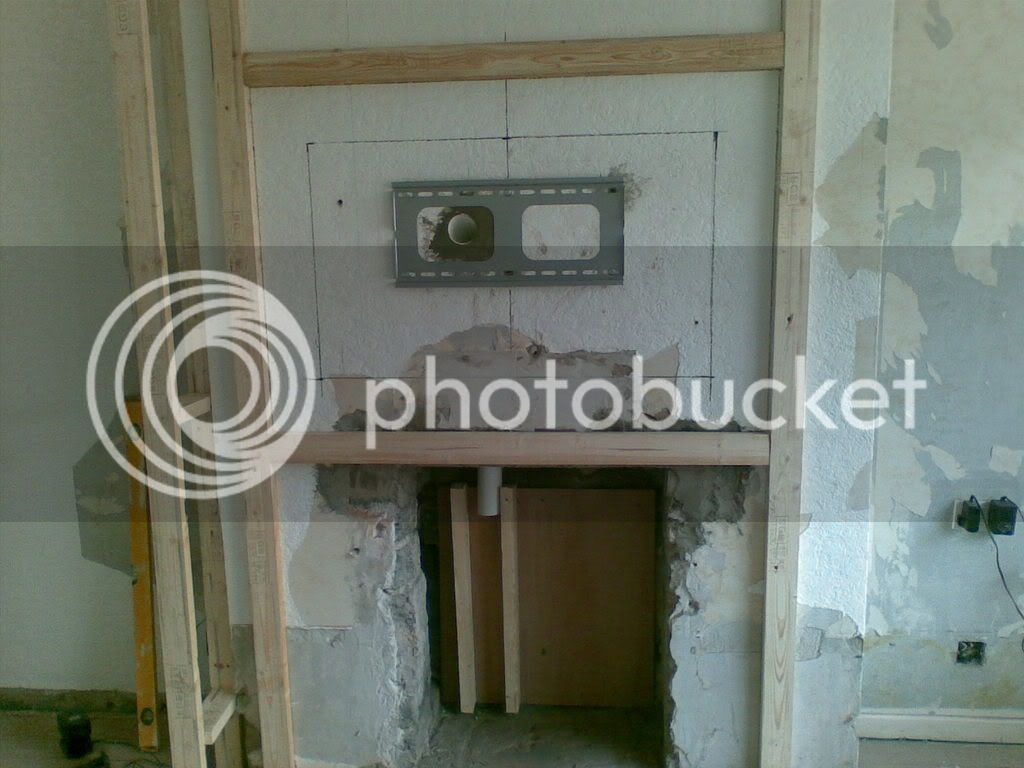 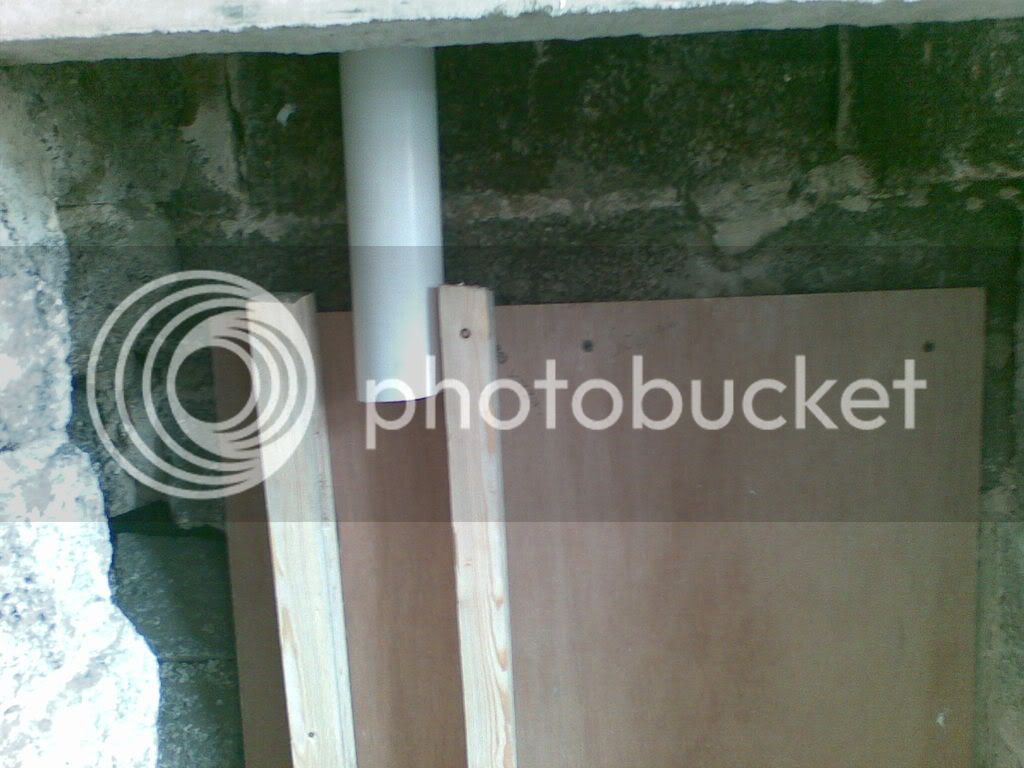 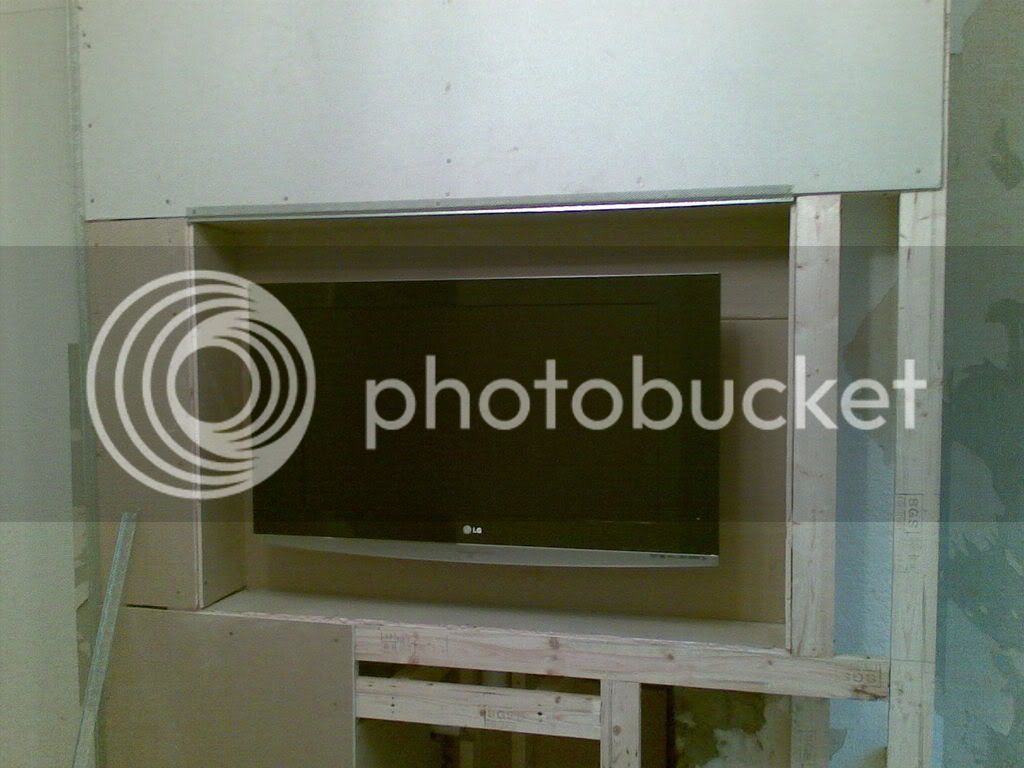 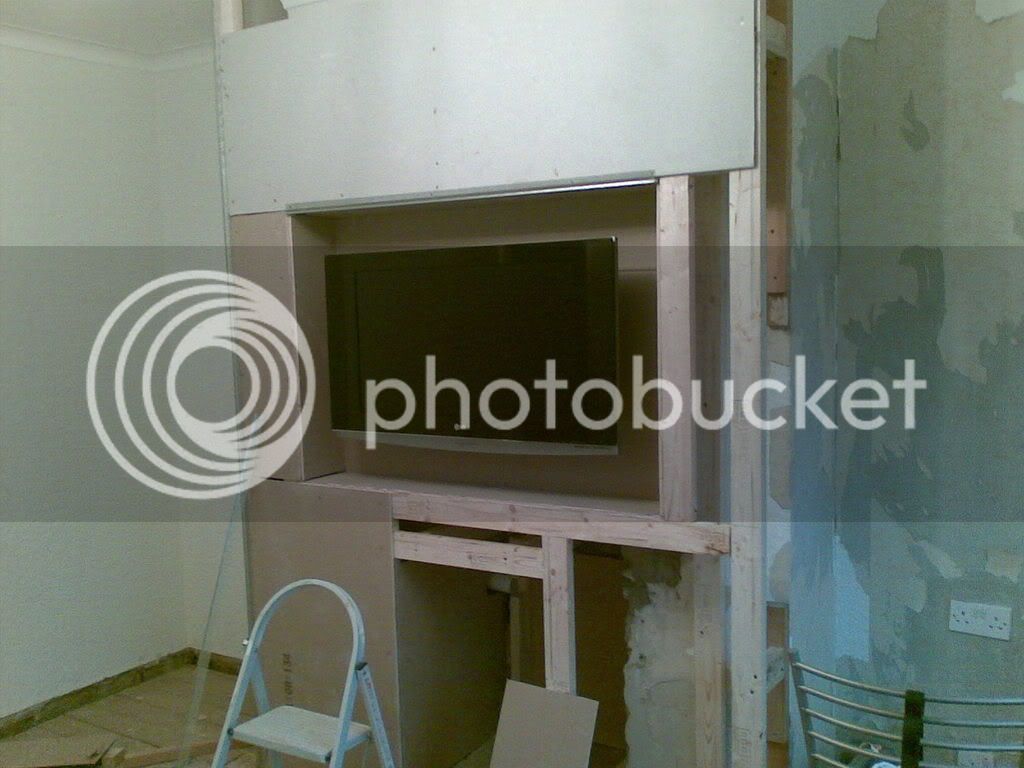 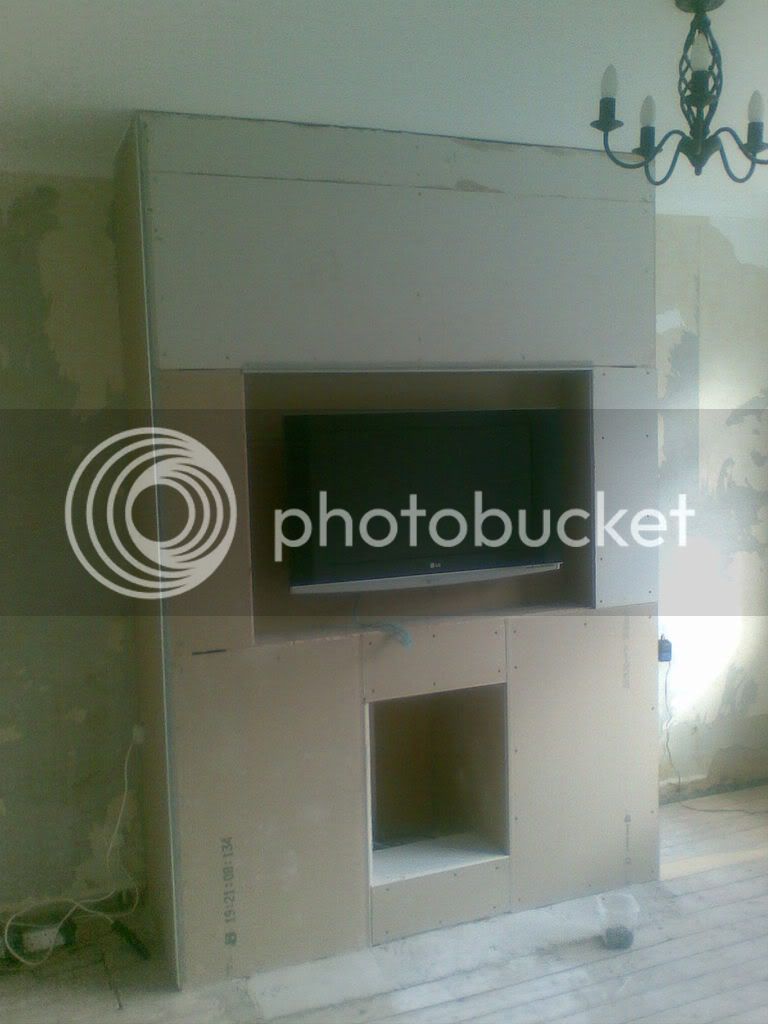 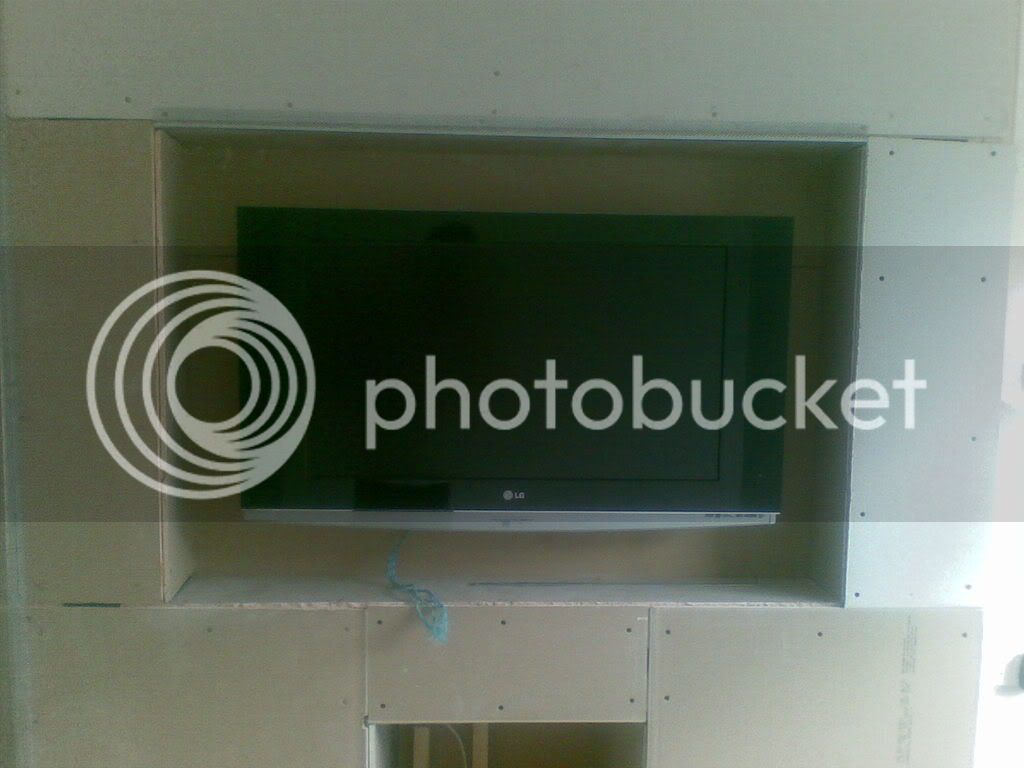 There's a built in desk planned for the left side and a unit on the right.

I've actually another conduit through the side to the desk so a dvi to vga cable can coonect the lappy to the lcd. Tested it the other day and the quality's mint!
Geo's Chimney Breast Install
PSN - geo99

What audio gear did you settle on in the end?

MarkP
My Cinema and the Bar!

just a set of 2.1 pc speakers! they're good enough for the size of the room!

I haven't managed to test them split between my laptop and my tv yet, so fingers crossed on that!!! - I actually don't have a clue how i'm even gonna do that - haha

The trunking I've used (ie guttering haha) mean i can pretty much add and remove things without to much fuss so when the funds aree back i'll invest in some good sound!
Geo's Chimney Breast Install
PSN - geo99 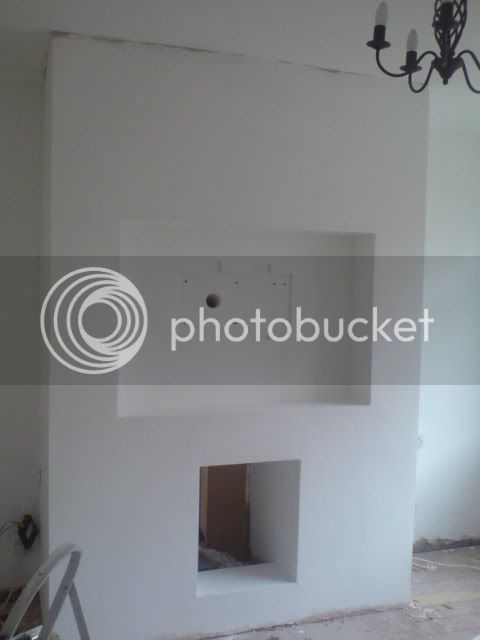 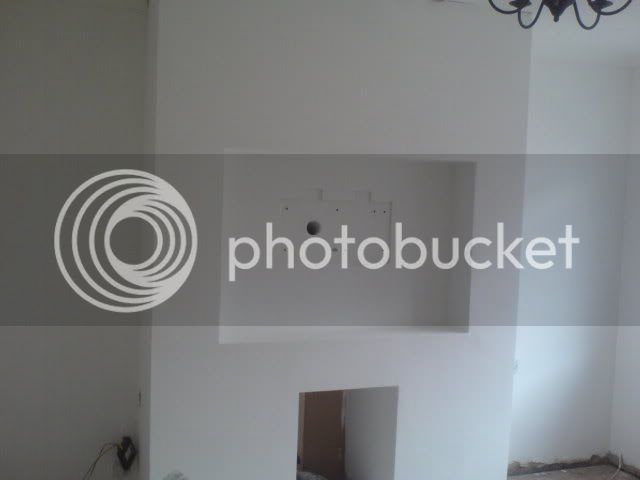 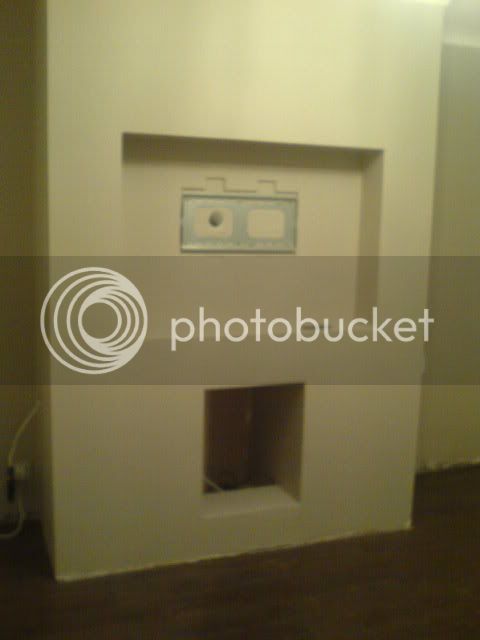 MarkP
My Cinema and the Bar!
E

here it is completed!

Need to tidy up some wires for the desk but besides that its done!!

Ta for the help, 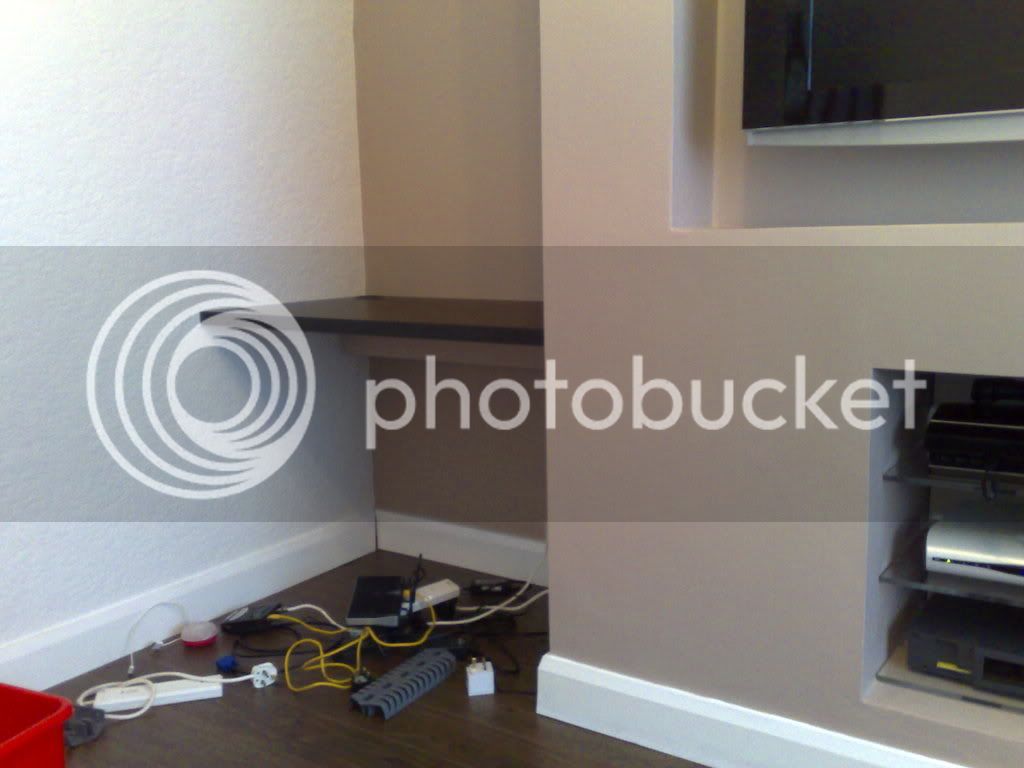 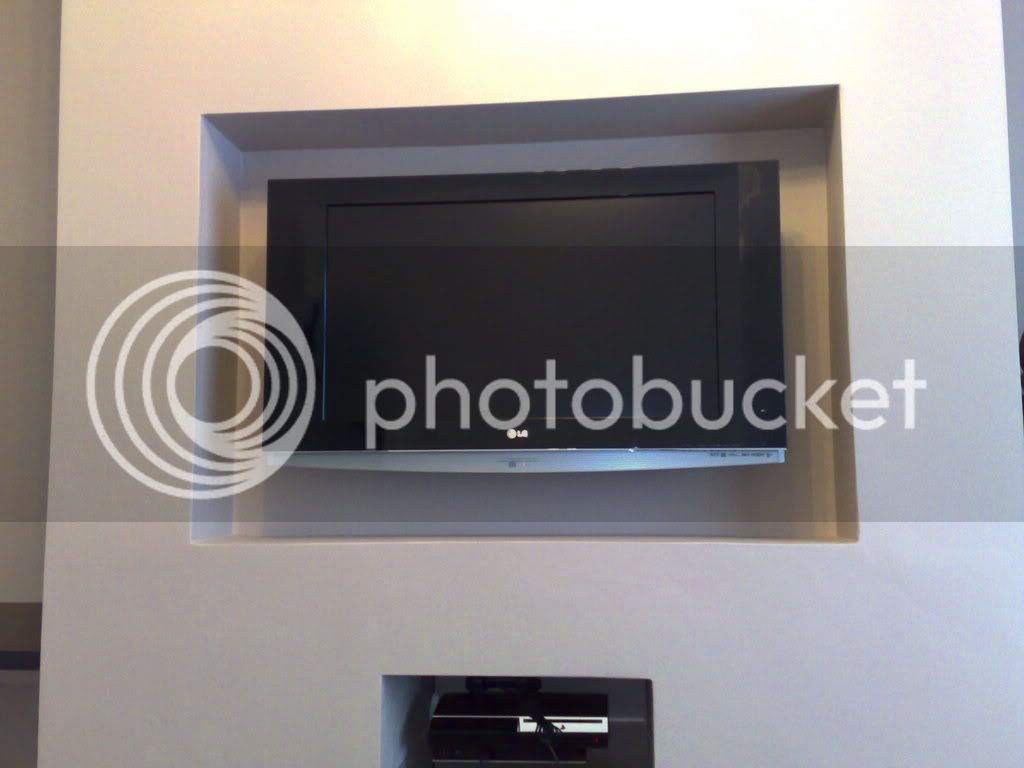 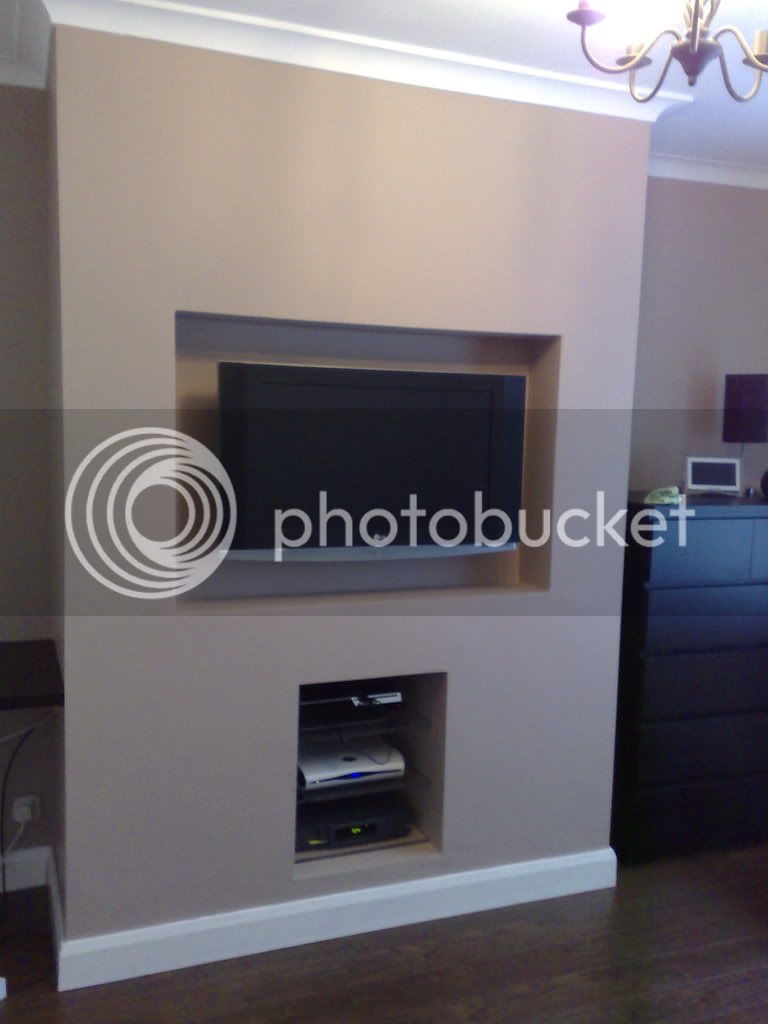 andyhill said:
What happens if you want a 46"/50" plasma or something one day?
Click to expand...

That's what i was thinking too

andyhill said:
What happens if you want a 46"/50" plasma or something one day?
Click to expand...

Stud the hole and bring a bigger tele forward, it will not be flush but it'll still look good.
Instagram
#501stcaptainphasma

to be honest mate, the room would only take make a 40/42" and I've checked the sizes against my 40" bravia and theres plenty room for it!!!!

and here's the before and after. 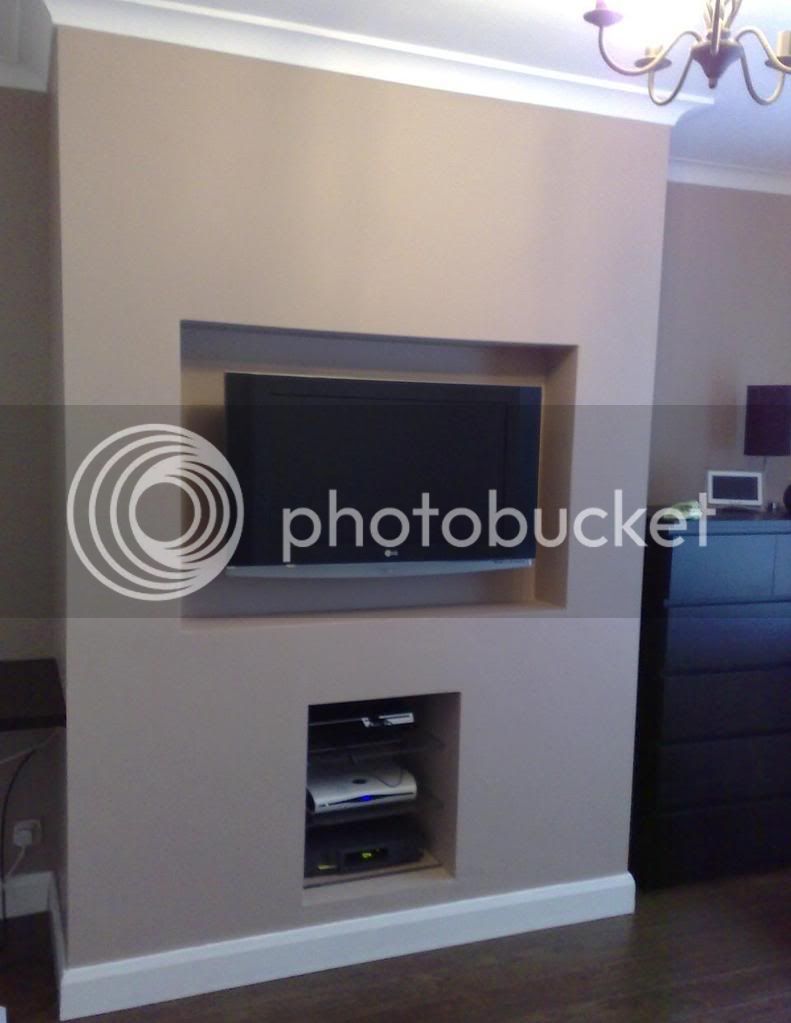 Hey guys, Don't Hate, Congratulate !!! This guys obviously spent a bit of time getting everything setup right and looking good and personally i think he's done a pretty good job. Maybe you guys could've come up with these suggestions earlier in the thread rather than coming on now, slating the guy and sounding like a smart ass, but hey, there'll always be some hater's !!!

geo99 said:
and here's the before and after.

I know how you like more pics so her you go...

Camera phone pics so not great!!!!

This is the plith I built under the desk top from Ikea to hide the cables! needs a bit of tiduing up but does the job. 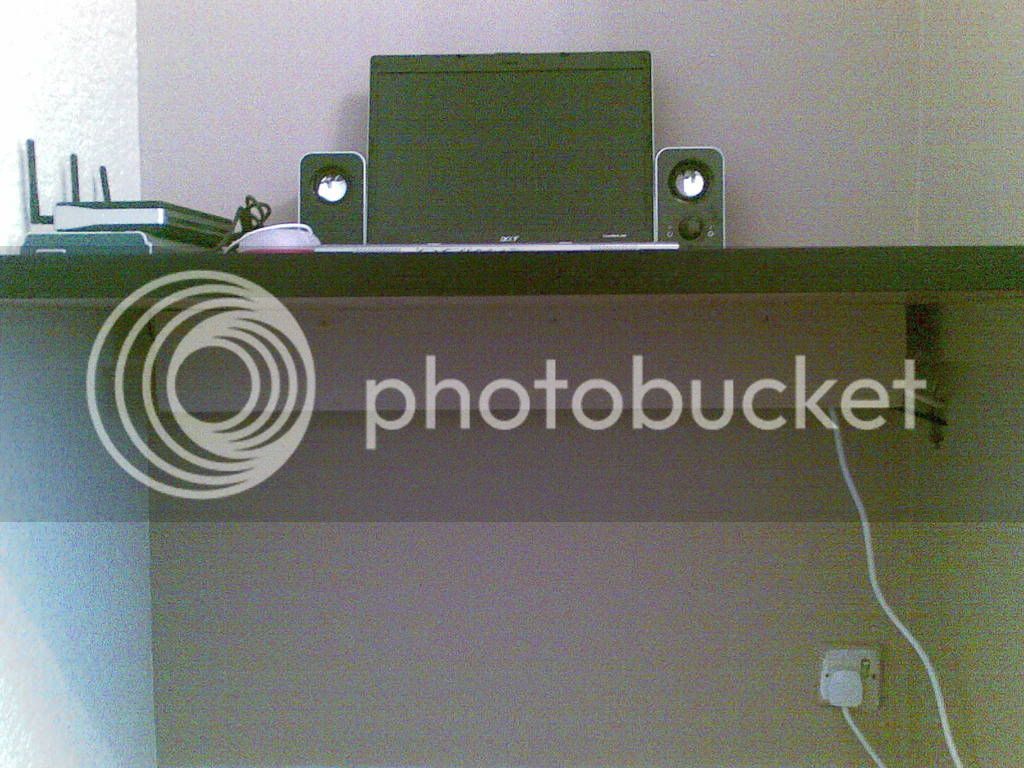 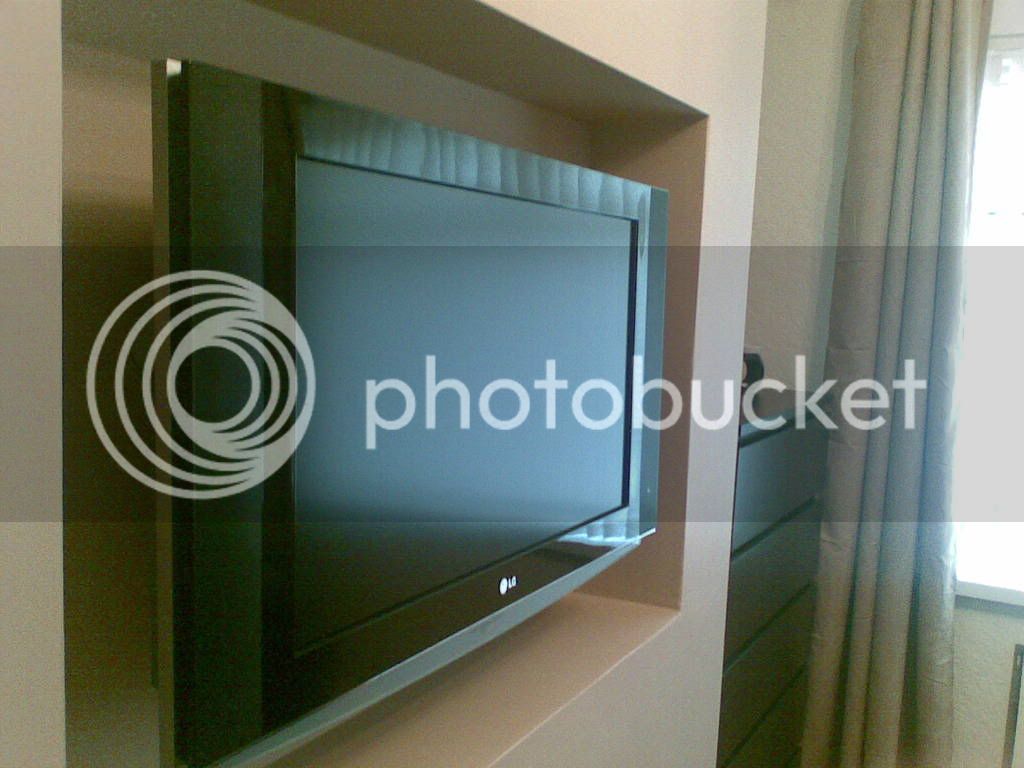 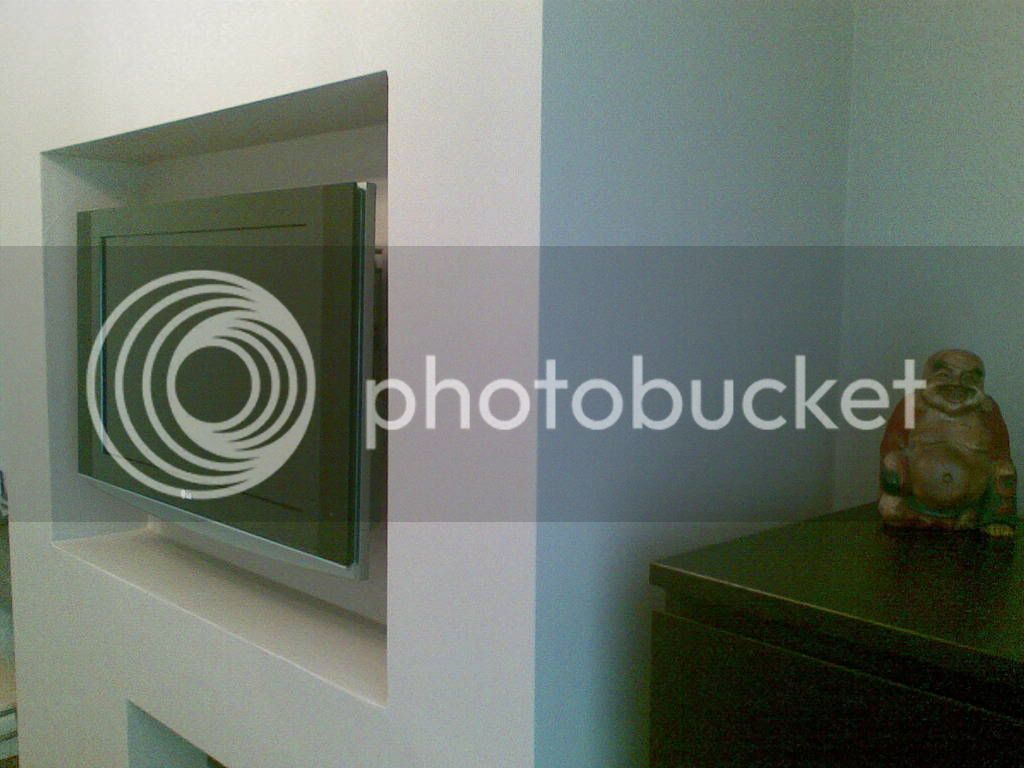 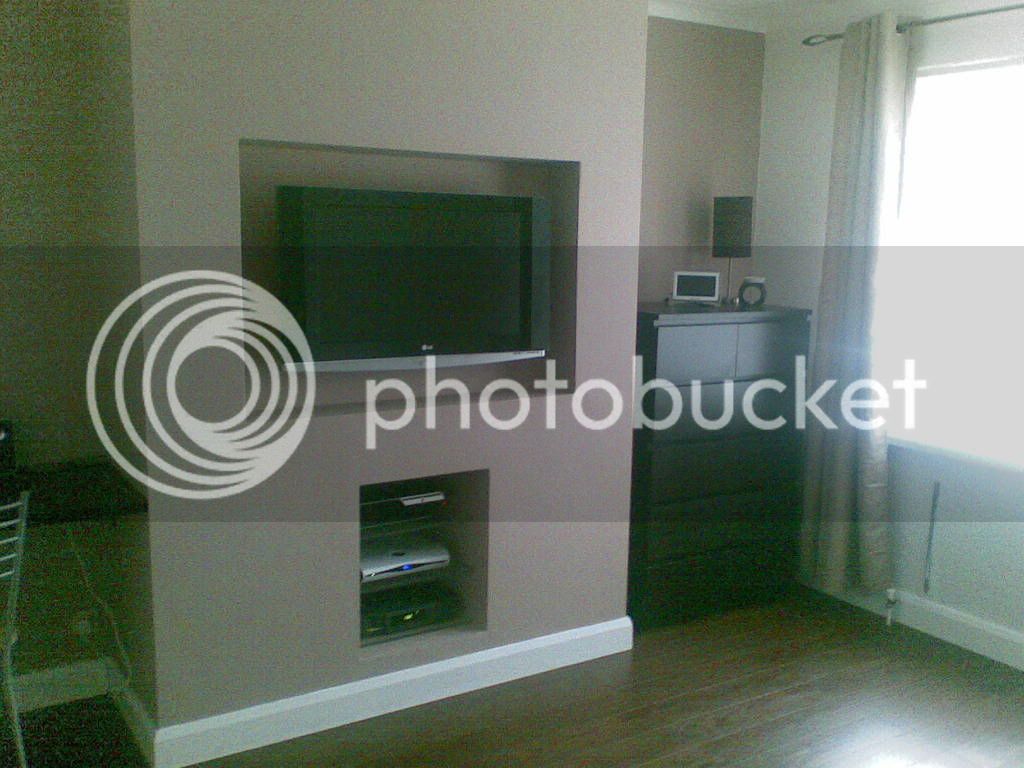 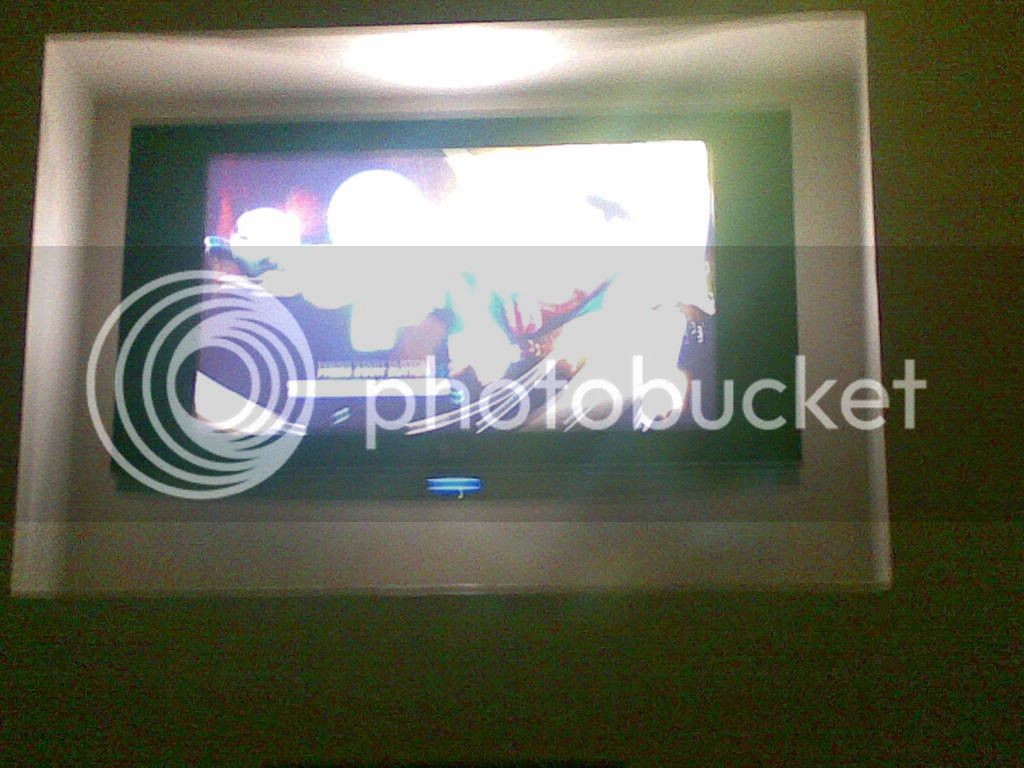 Just checked your link and mine is hardly a patch on yours but i'm chuffed with the results because i did everything myself bar the plastering.

I'm a 95% man thou..... get most of the work finished then sit back and admire it without actually completing it all! haha so better get my backside into gear!!!!!

Just checked your link and mine is hardly a patch on yours but i'm chuffed with the results because i did everything myself bar the plastering.

I'm a 95% man thou..... get most of the work finished then sit back and admire it without actually completing it all! haha so better get my backside into gear!!!!!

But the difference is you did the work! So far all I have done is pay some to do the work for me....not quite the same. That will change of course as things progress, but I am not sure I would have had the balls to take a sledgehammer to the chimney brest and launch on something that I knew I would have to finish myself. As I said, well done. The end result looks excellent.
Sony VPL-VW520ES
Denon AVR-X6200W
Jamo D600(7.1 Speakers)

Get stuck in Mate!!!

I'm fairly handy but there were times i wanted to give up but it's great when you can look at it ansd say you did that!!! haha