ADSL Modem to use with T-plink Deco Mesh network

I am looking to switch over to mesh network with a TP-link Deco M4 setup. I was using a TP-link VR1900 ADSL router/modem. But it doesn't have a modem only mode. Can someone recommend an ADSL modem that I can connect to the Deco M4?
I tried the Draytek Vigor 130 but that kept dropping the ADSL connection. Can anyone suggest any reliable alternatives to use with a BT ADSL connection? Either a modem only or a modem/router with a modem only mode.

You can use the TP Link VR900 (i think you meant 900 as there's no such VR1900 model) in modem only mode , aka bridge mode. In the settings you need to go to Advanced>Network>Internet>Add and select 'Internet Connection Type' as 'bridge'. You may need to 'delete' your previous connection. 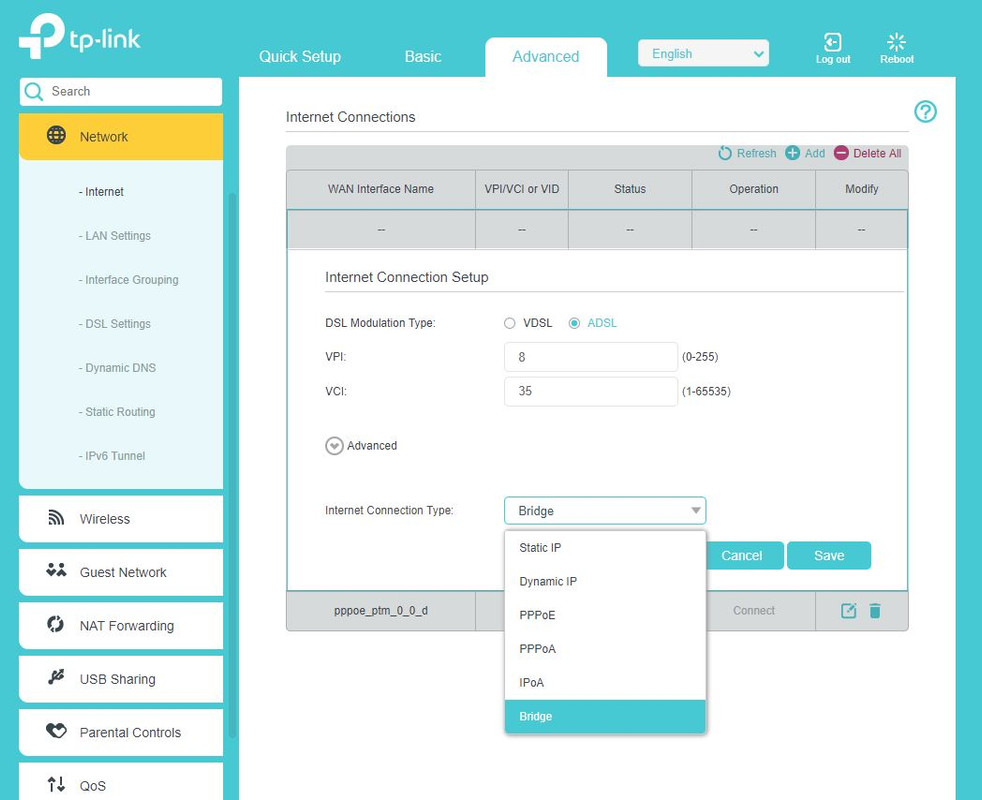 psychopomp1 said:
You can use the TP Link VR900 (i think you meant 900 as there's no such VR1900 model) in modem only mode , aka bridge mode. In the settings you need to go to Advanced>Network>Internet>Add and select 'Internet Connection Type' as 'bridge'. You may need to 'delete' your previous connection.

I’ve just ordered a deco m5 set so now need to find a modem I can use in bridge mode (instead of my BT home hub5) and run the deco in router mode to get all the features - what modem did you go for in the end and did it works as expected?
Thanks

Does the Deco system allow you to operate it in "AP" mode (or whatever it might call it?) If so, you could continue using your exiting modem/router without any changes except turning off it's Wi-Fi if you no longer need/want to use it - usually it's only a couple of clicks in the UI to do so.

You only need a separate modem if you want your Deco to function as your router as well as a fleet of managed AP's.

Wi-Fi is facilitated by "Access Points" not "routers" - there's an AP built in to the SOHO "get-you-on-the-Internet" omni-box frequently (and inaccurately) called a "router." You don't need "routers" to "do Wi-Fi" - a router's job is to sit at the "edge" of a network joining to other networks (which in SOHO use case means your ISP.) All Wi-Fi is facilitated by AP's, whether they are stand alone or built in to other things like router, HomePlugs, Repeaters, "Extenders," Sky boxes, etc. etc.

If you have acquired your Deco system simply to facilitate "better" Wi-Fi by deploying a fleet of managed AP's, then have a look and see if it'll run "AP only" mode (nomenclature varies, some systems call iy "bridge" mode, although that is an overloaded term,) and if so, I'd do so and just turn off your routers Wi-Fi. Thence you don't need any replacement modem/router or anything else - just plug in the first Deco node to your wired network somewhere, stick into AP mode, then deploy all the rest of the Deco AP's.
Last edited: Jun 18, 2020
You must log in or register to reply here.
Share:
Facebook Twitter Reddit Pinterest Tumblr WhatsApp Email Link