well was having a look through my photobucket album and stumbled upon my first hd tv (albeit a goodmans, a strange looking thing it was with its big speakers built in lol) which i got may 2007.

so i started looking through and was amazed at how my setup has changed in 12 months, not saying its got better but its deffinatley changed. Its all thanks to this forum really as to be honest i wasnt so bothered about AV before i stumbled up on this site.

so i thought i would post a few pictures. please excuse the horredous choice of colour in the first poicture, makes me cringe even looking at it lol. 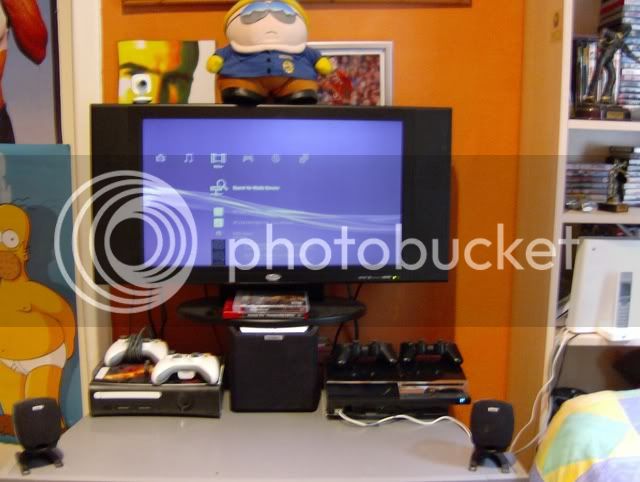 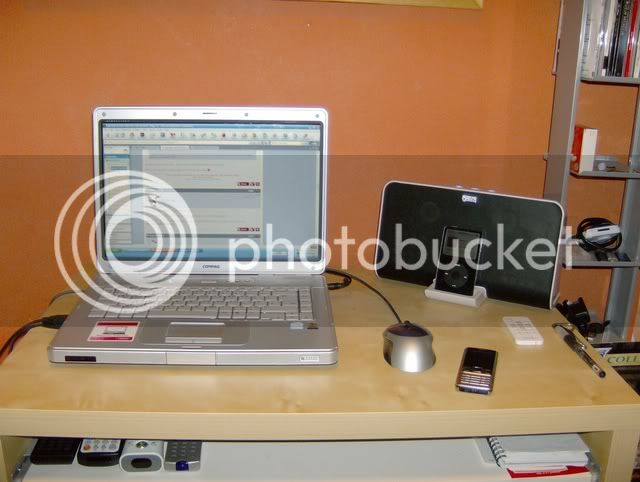 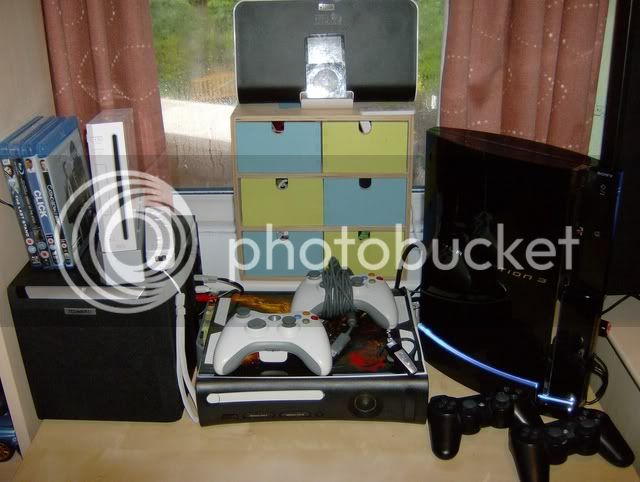 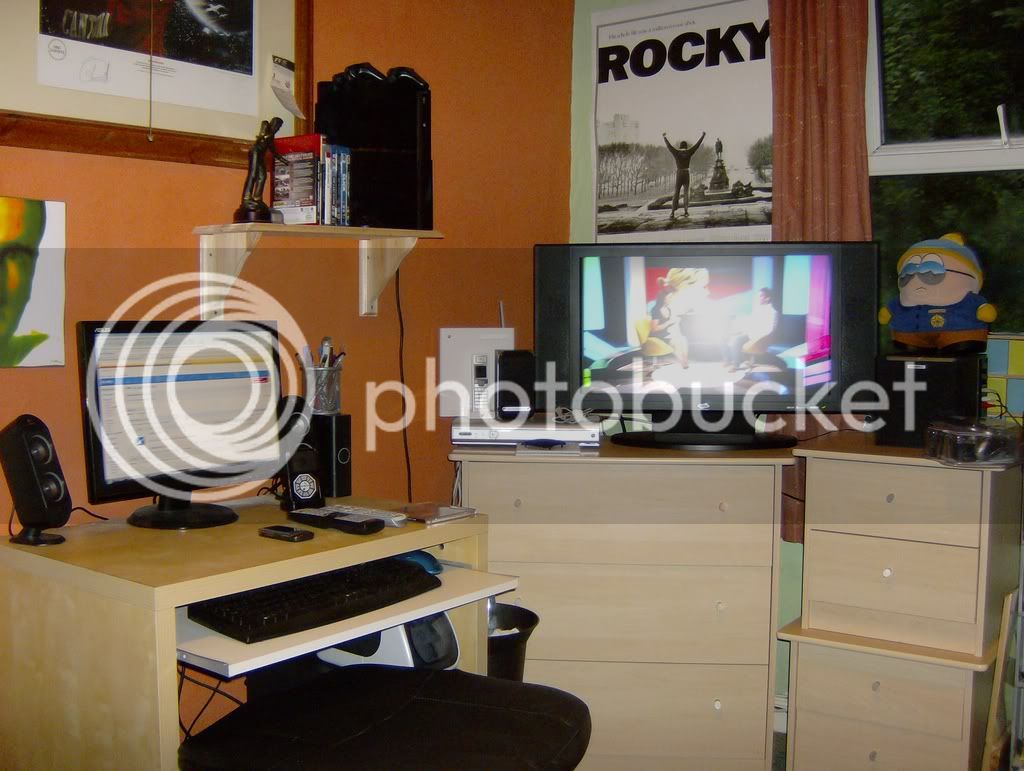 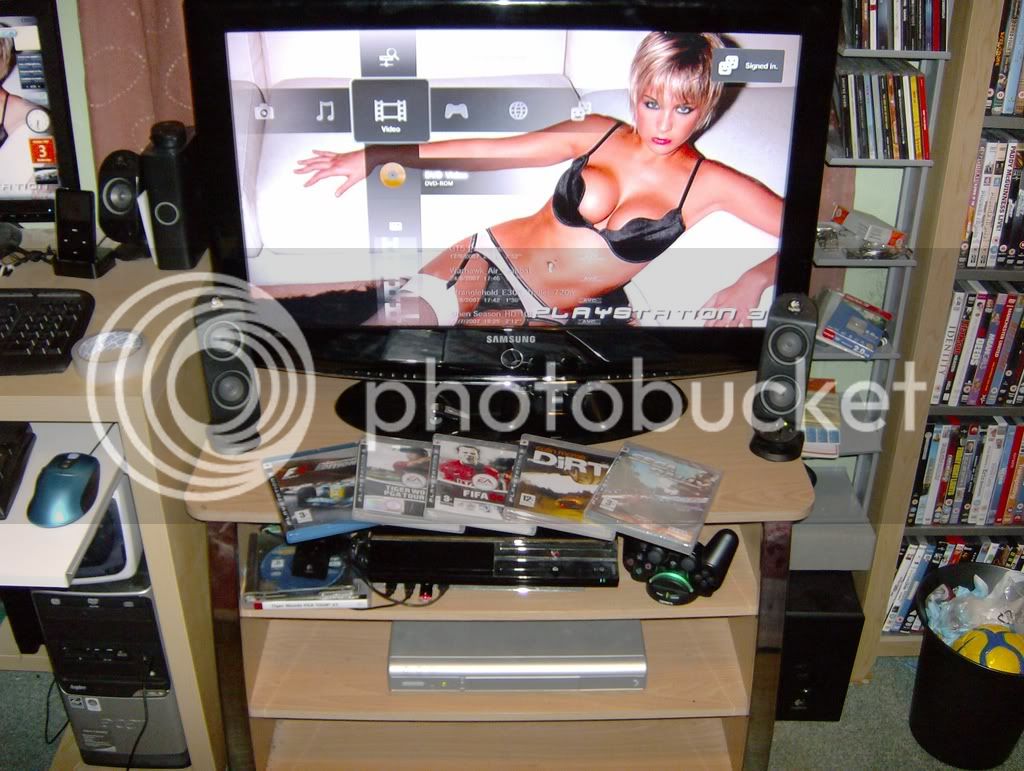 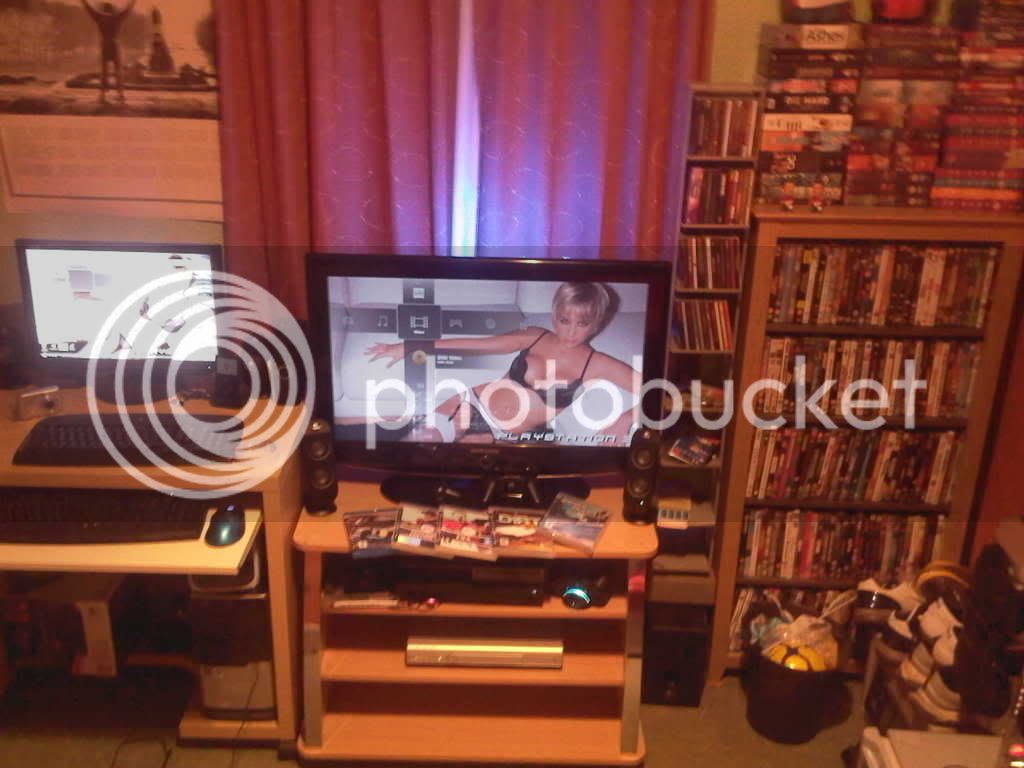 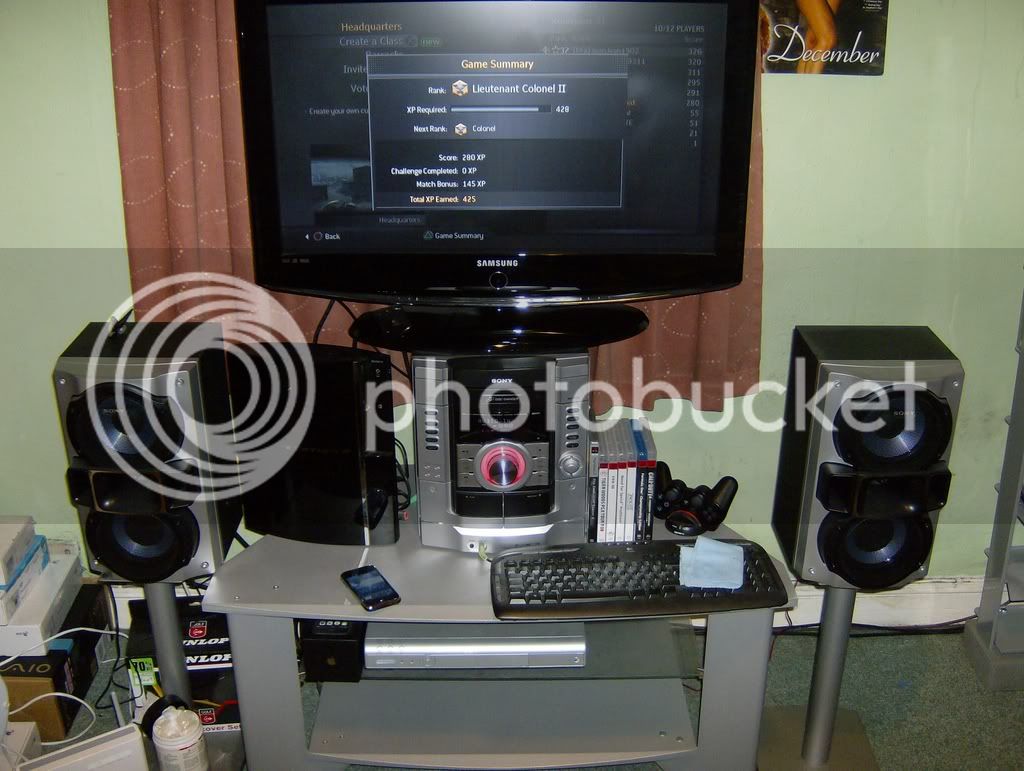 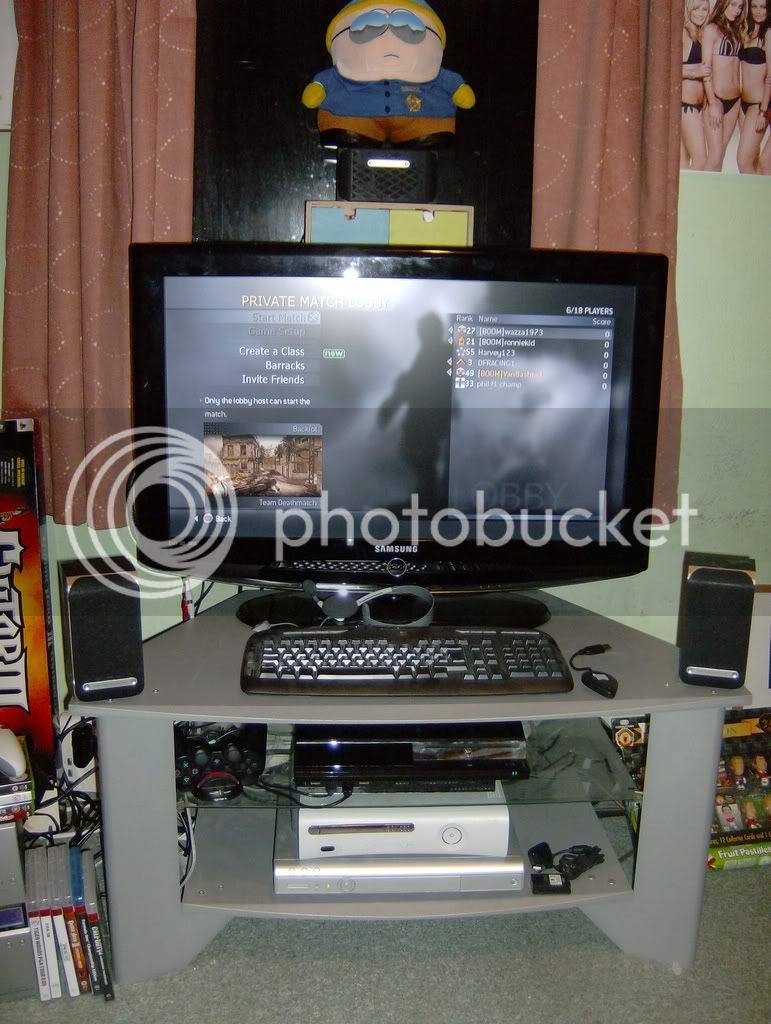 6th january 2008 - yet another move around as new dvd stand and also the best new toy any racing fan could wish for. 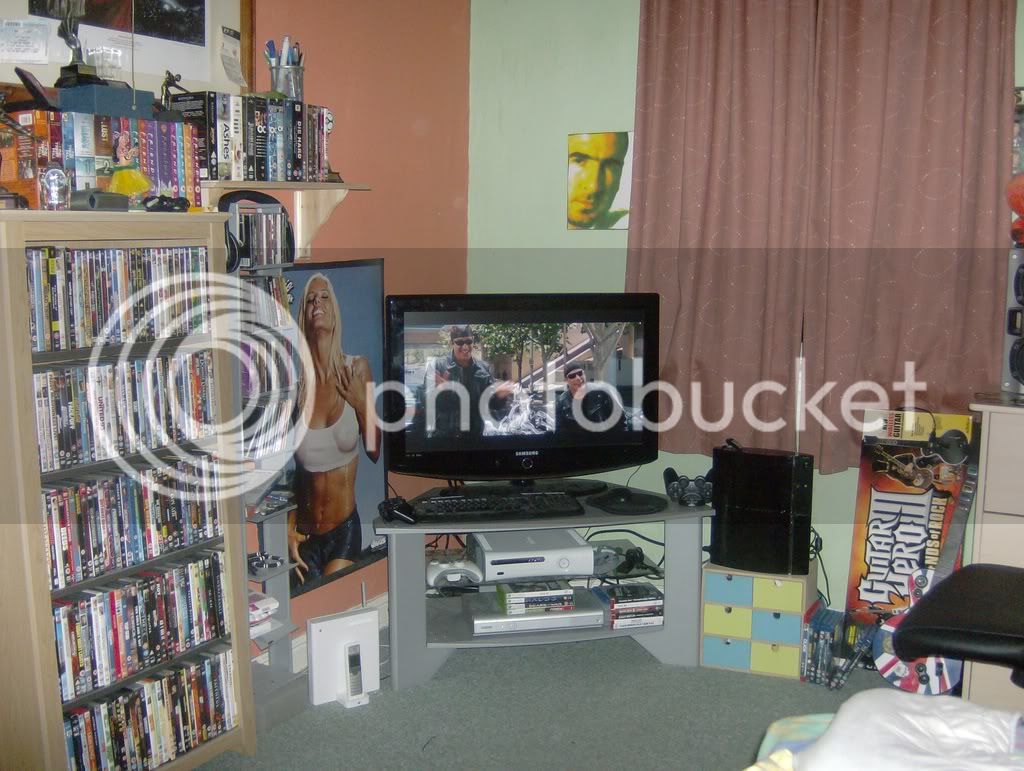 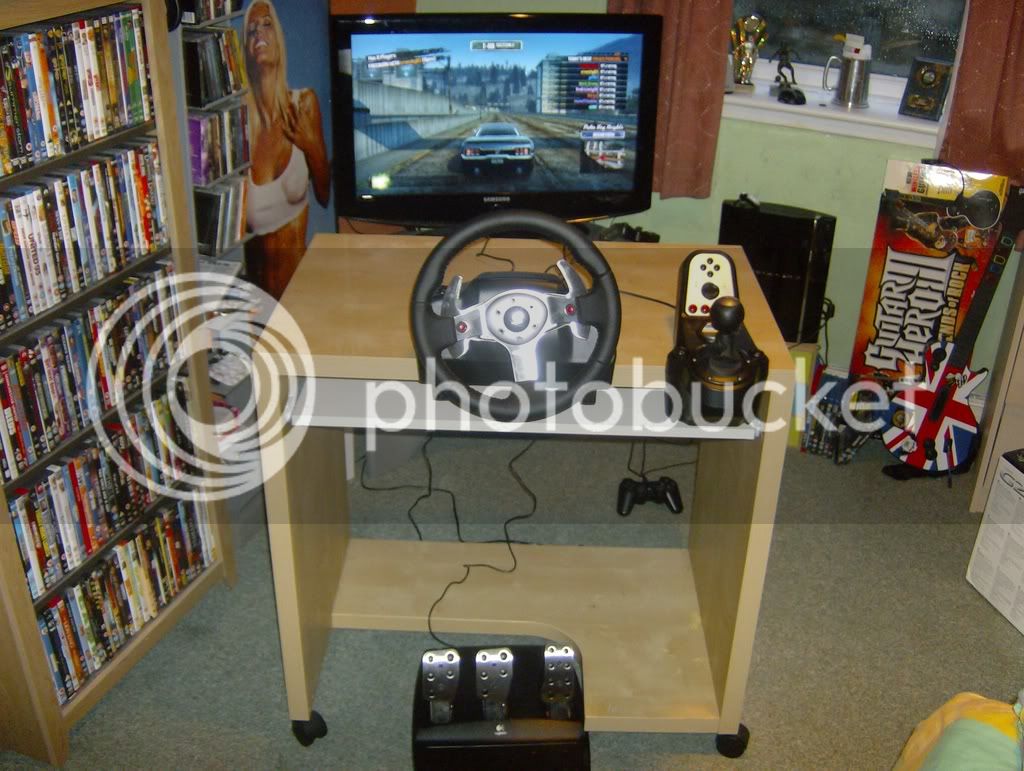 february 2008 - decided it was about time i redecorated as the current scheme was....well crap, 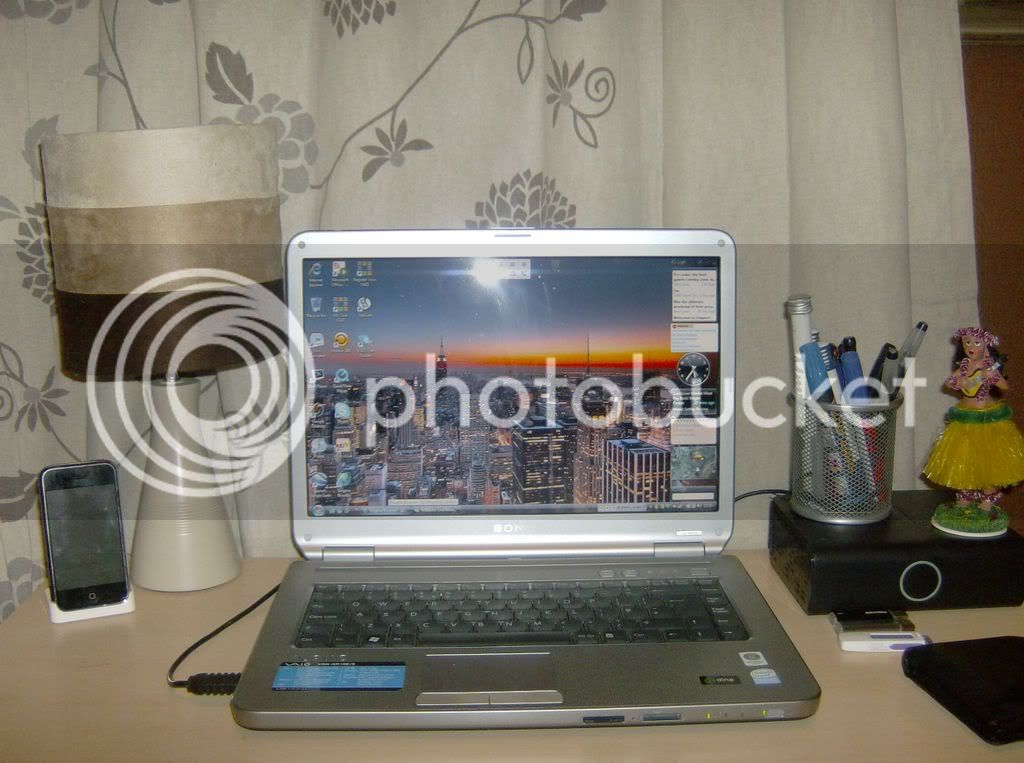 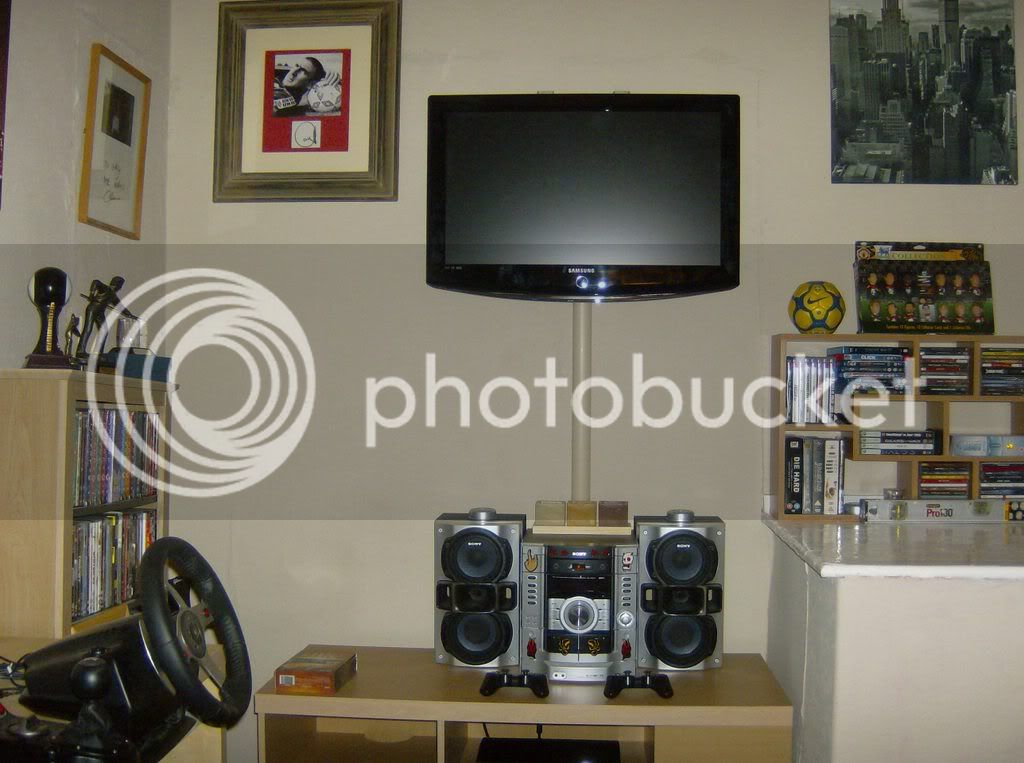 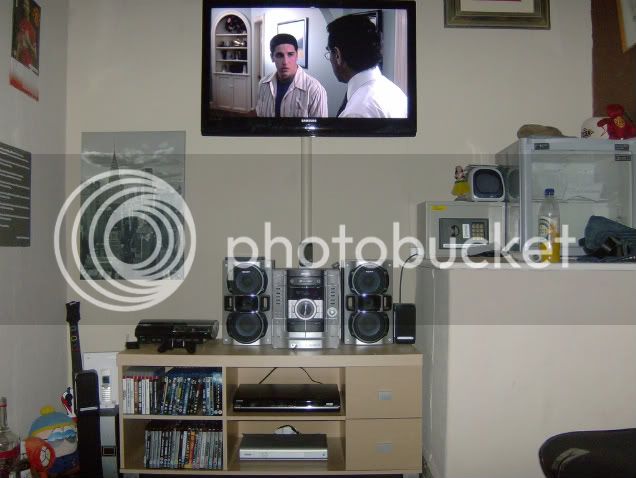 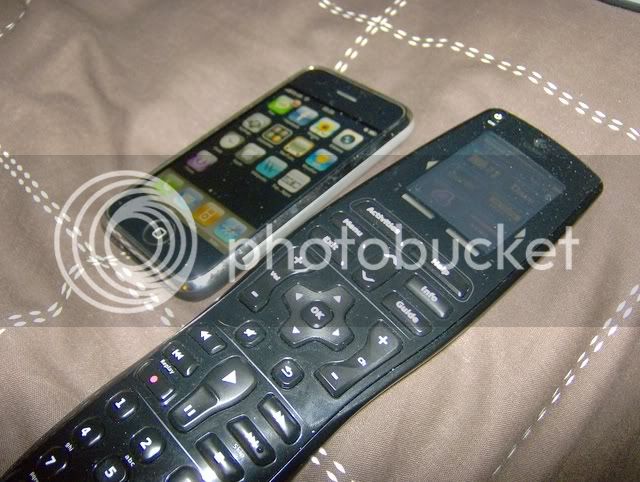 18th may 2008 - and this is where i am today, no doubt new things will be added, been looking at these onkyo 605 thingy majiggys, could someone take a pic of the back of theirs? i just want to see what the connections are etc. 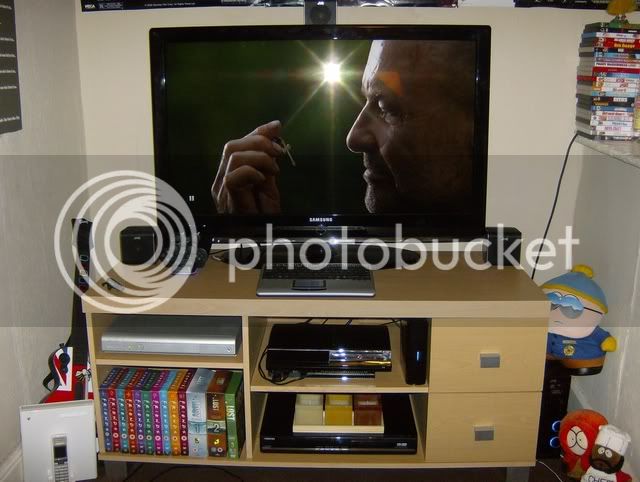 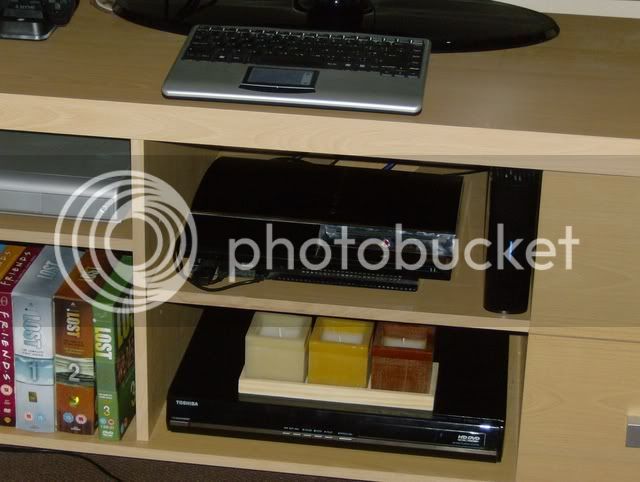 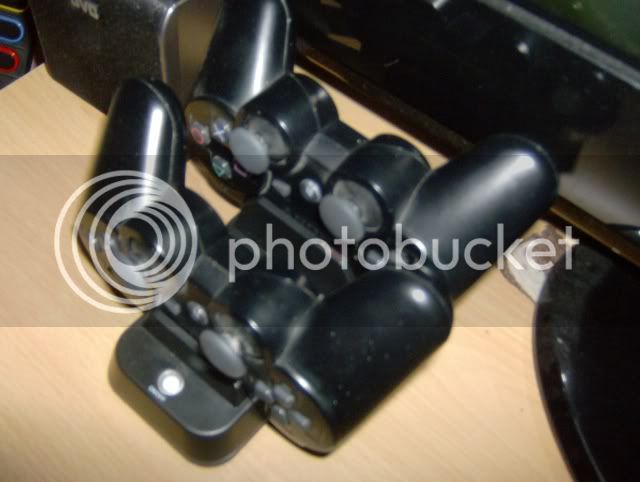 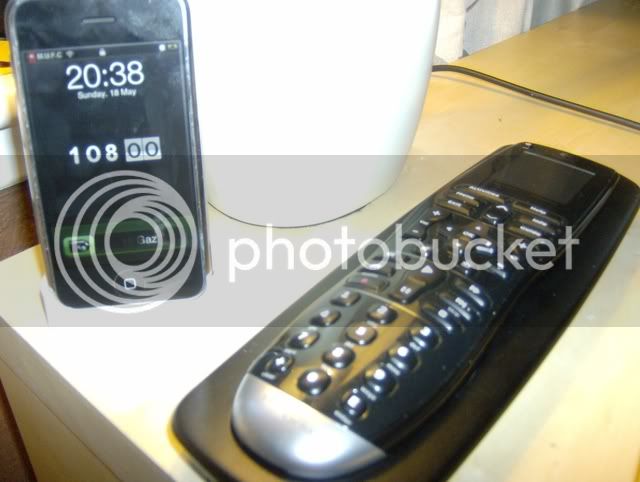 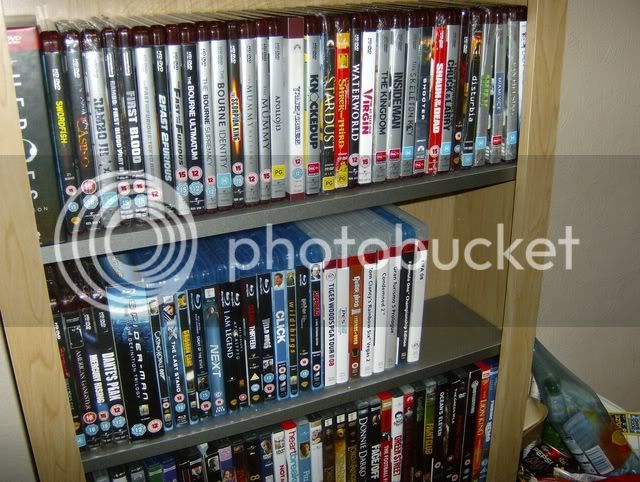 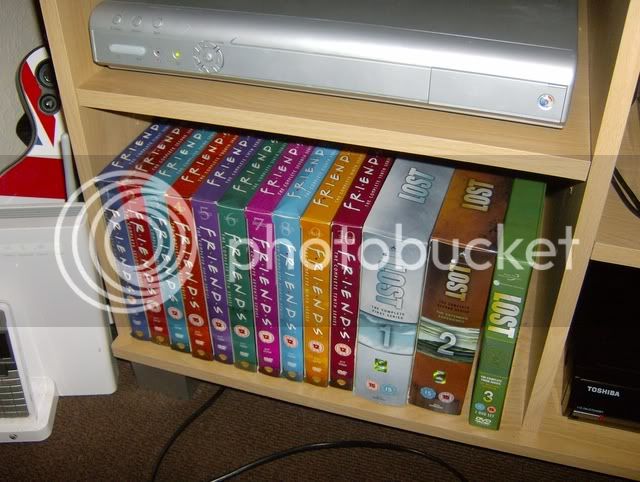 You've certainly gone through a fair few changes, but you have some really nice geer with a good looking set-up (same AV unit as me) .

thanks for posting that, was just unsure how the speakers connected, im a total novice wen it comes to receivers
XBL: Moiizer
​

vambashted said:
thanks for posting that, was just unsure how the speakers connected, im a total novice wen it comes to receivers
Click to expand...

I was too matey. The Onkyo 605 is still my first and only receiver. It's very simple.

beendoing a bit of research regarding receivers, what do you guys think of http://www.richersounds.com/showproduct.php?cda=showproduct&pid=ONKY-TXSR506-BLK

is it good value??

beendoing a bit of research regarding receivers, what do you guys think of http://www.richersounds.com/showproduct.php?cda=showproduct&pid=ONKY-TXSR506-BLK

is it good value??

The 506 won't pass audio over HDMI, so you won't be able to get multichannel PCM from your PS3 mate.

What you should be looking at is the 576:

This will pass audio over HDMI, so you'll be able to enjoy all those DTS-HD MA tracks as LPCM to the amp, now that the PS3 can decode it onboard.

Only a few smackers dearer, but so worth the extra pennies !
My opinions are held entirely responsible by AVForums...they made me type them.
________ My kit pics ________​

Nice setup and great to see the progression. If I was you at would look at an AV receiver that accepts LPCM over HDMI so you can benefit from HD audio from the PS3. Better to buy once than regret it a few weeks down the line and think 'what if?'. You're looking at the next model up for that, the 576 AFAIK, Sony 910, Yamaha 761, Denon 1908, Marantz SR4002. There are new amps coming out from the likes of Sony and Pioneer soon that may also appeal. The 605 has been well received but the onboard HD audio decoding isn't required for the PS3 and unless you get it heavily discounted I would look elsewhere.

now with the current surround sound iv got, it basically has a clasp you lift up at the back and put the speaker wire in and let of the clasp.

what are the connections on the back of the receivers you suggested? same sort of thing or will i need to buy seperate speaker cable? as iv seen some pioneer speakers on play.com and that seem pretty reasonable and was just wondering if i need to buy specific cable etc..

Gaz this is what the rear of the 576 looks like:

You'll be able to use your current cable with the new amp and Pioneer speakers, though you could always get some new cable as to be honest it doesn't cost a fortune for something half decent. Remember that you'll also need a subwoofer cable that looks like this:

Just loosen the binding posts at the back of the Onkyo, insert your cable and re-tighten them. Voila !
My opinions are held entirely responsible by AVForums...they made me type them.
________ My kit pics ________​

hi force (or anyone who knows there stuff)

would this be suitable as a receiver? http://www.avforums.com/forums/showthread.php?t=761186

vambashted said:
hi force (or anyone who knows there stuff)

would this be suitable as a receiver? http://www.avforums.com/forums/showthread.php?t=761186

It's ok Gaz- but a bit lacking in connections. There's no HDMI inputs, only optical - so again, you won't be able to get uncompressed multichannel PCM.

If you really want to get the most out of the PS3 as a games machine and Blu-ray player, then you really need the audio-enabled HDMI inputs on a receiver - akin to the Onkyo 576 that we mentioned earlier.

I completely agree with DavePuma - you're better off looking at some of the models he suggested. If money's an issue, then it's better to be patient and save for what you want, rather than regretting buying something that may be cheaper, but will leave you wanting to upgrade again sooner rather than later.

Looking good. Nice screen. Looks better on the stand too.

CFS said:
Just noticed the premier league big head figures - loved those! Can we have a close up please?!
Click to expand...


yea ill sort one out when i get home from work lol
XBL: Moiizer
​ 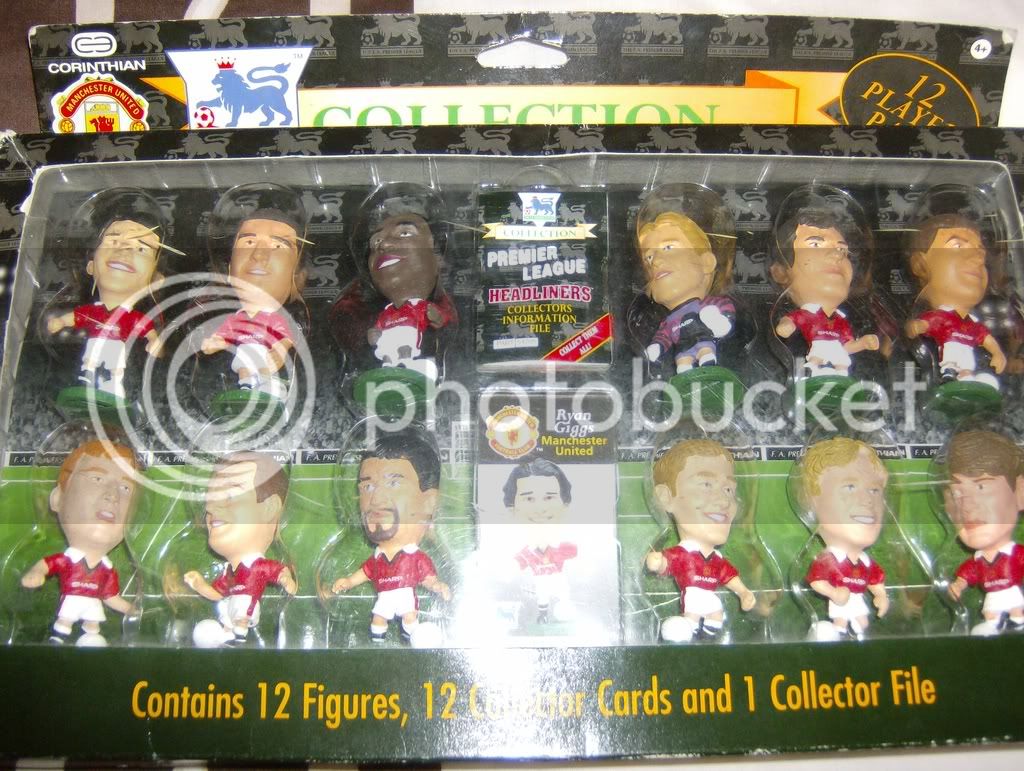 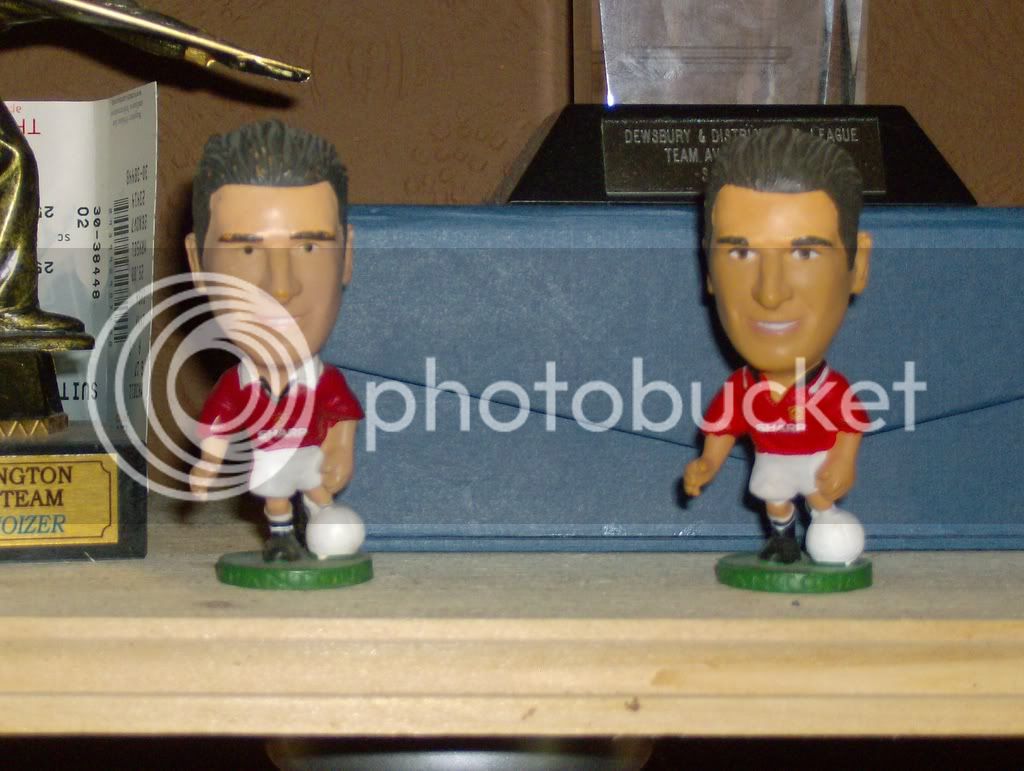 J
Is this Wall Mount strong enough to hold my 55CX?

S
I think I need to buy an AV receiver...