The new 10.5-inch iPad Pro has a 20 percent larger display, made possible by reducing the tablet's borders by 40 percent, yet it still weighs just 1 pound. It allows the display of a full size onscreen keyboard and enables users to attach a full size Smart Keyboard. Apple will offer the new Smart Keyboards in 30 more languages. 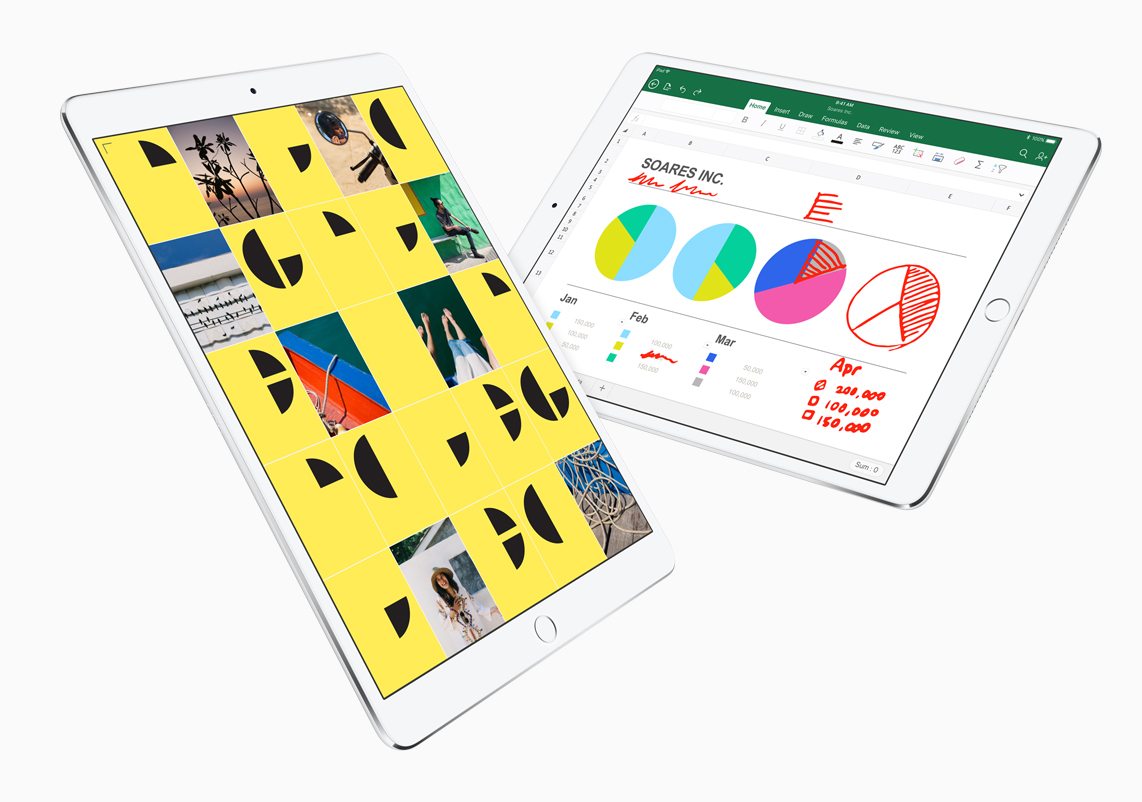 I should receive a Pro 10.5 64 cellular tomorrow to replace an Air 2. I use the iPad quite a lot outside so am hoping the screen visibility with the new one is much better. If not, I have the option of returning it to Apple for a full refund within 14 days.

I'm so tempted by the 10.5. My old mini is now painful to use with no end of crashes on safari and its recently started to show a black screen where I have to reboot most mornings. It's done well but it's had its day.
Smoke me a kipper, I'll be back for breakfast.

Similar experience here - sadly it looks like the mini's days look numbered. I've gone for a 10.5 but I would have stuck at the mini size had it been offered with the same spec.

It's a shame the 10.5 will not be able to run apps in iPad UI when side by side in 50:50 split, like the 12.9 can, but ergonomics win out for me and I remain unconvinced about how much of my productivity workflow I could shift from the Mac to an iPad anyway.
Last edited: Jun 12, 2017
I thought the future would be cooler

Ordered a 10.5 256gb in rose gold for the wife from J Lewis last night, pickup tomorrow from our local Waitrose.

Seems the 12.9" are a bit thin on the ground today in Argos and Currys. Grr.
Disco baby, sexy baby, HOT!

Nice. Have you picked up a case yet?
I thought the future would be cooler
F

Just picked up a Pro 10.5 64 cellular from Apple to replace my Air 2. I use the iPad outside quite a bit and the new one is definitely better in this respect - not a massive difference but still better.

It is a bit heavier and a bit bigger than the Air 2 but in return the screen is significantly bigger. I will send the 10.5 back to Apple and am getting one from John Lewis with the 3 year warranty.

I bought Ipad Pro 9.7 when it was launched, from JL rather than the Apple Store, due to the extra warranty.
Wanted to see the new 2017 Ipads at my local Apple Store but they don't have it even on display!
The internet is full of demos and reviews of new 10.5 inch size but no reviews on the largest Ipad Pro 12.9 inch. To be honest, I thought they would get the OLED screen by now for their Ipad Pro. Not sure how much anti-reflective coating they have applied to the new Ipads, as Ipad Pro 9.7 also has anti-reflective materials.

I would have love to see a comparison between the old 12.9 Ipad pro vs 2017 12.9 Ipad Pro, to see if the size is the same and what have they improved upon but sadly nothing on the Internet to find out, as they seem to be obsessed with 10.5 version.

My second gen Ipad is still running, but it's quite slow, so waiting for that to die, before I replace it but it won't be a Pro model, as we just do basic surfing, so a basic Ipad is required as the Ipad Pro is quite expensive.

SHATNERSTACTIC said:
Nice. Have you picked up a case yet?
Click to expand...

My gf got me a smart case today, but I haven’t opened it yet

What do peeps think on the new iMac Pro....space grey anyone??

Currently debating selling my Air 2 and my MacBok Air and getting a 12.9 iPad Pro and using that as a replacement for the MacBook, with what I use my MacBook for it just seems to make sense for me, waiting to see how good iOS 11 is in the iPad first though
PS5: W90WBA
Nintendo Switch: SW-2016-5989-4593 (W90WBA)

Well I've done the deed. Went for the 10.5 with just the standard 64gb storage.
Watched a few YouTube vids and it looks very nice.
My old mini which is 5 years old really struggles now so I'm hoping this new iPad has me smiling.
Smoke me a kipper, I'll be back for breakfast.

Codexy054 said:
What do peeps think on the new iMac Pro....space grey anyone??
Click to expand...

Wrong place to ask. This is the iPad forum.
JayCee

dpb69 said:
Anyone recommend a case for 10.5 that also can hold a the pen? Thx
Click to expand...

This is the one annoyance for me. They really ought to have tried harder to incorporate the pen into their iPad or smart case designs.

Screen record is a nice feature, but how do I make it record in landscape?

You see what I mean? Orientation lock was off

SHATNERSTACTIC said:
Nice. Have you picked up a case yet?
Click to expand...

My old Mini is in an Otter defender case and I'll be getting the new Otter case for the Pro. Adds a bit of weight but the Mini survived me and my daily work from the start.
Smoke me a kipper, I'll be back for breakfast.

Didn't think iOS11 was out until the Autumn?
JayCee

it's the beta.
You must log in or register to reply here.

Looking to buy my very first iPad Pro (2020) and would appreciate some help and advice.