As good now as when it was first released 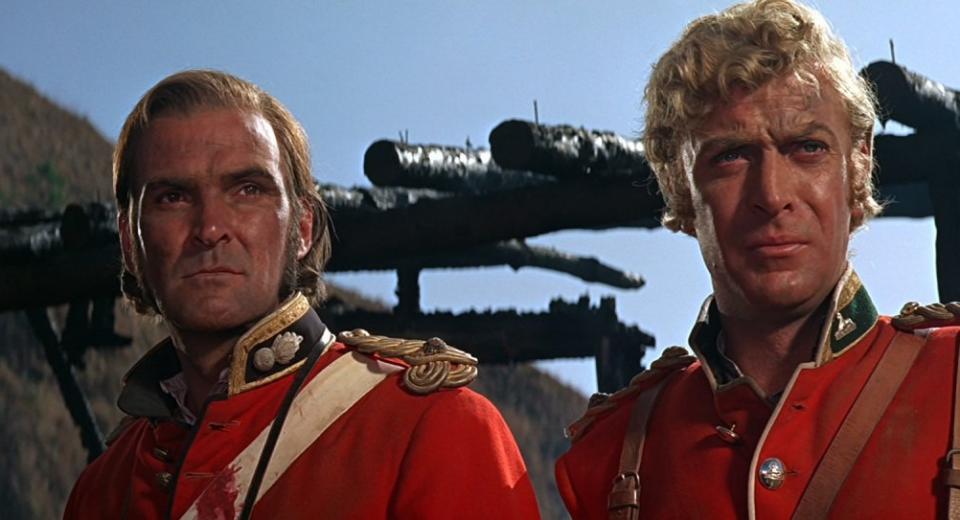 There must be very few movie titles that can be referred to in the same sentence as the words 'epic' and 'classic', that do not dilute the meaning of either accolade. The 1964 production 'Zulu' has to be somewhere near the top of that exclusive list. It was the movie that brought international stardom to Michael Caine and, arguably, provided a career high for its star and co-producer, Stanley Baker.

Directed by Cy Endfield - an American Producer/Director working in the UK sponsored by the McCarthy witch hunts of the 1950's - and scripted by John Prebble, 'Zulu' takes its time to introduce us to its main characters and they're all well drawn - so you care what happens to them. Michael Caine's upper class Lieutenant Bromhead vies for command with Stanley Baker's gritty Lieutenant of Engineers Chard, who's only there to build a bridge. Chard wins as his commission began 2 months prior to Bromhead. James Booth's malingerer, Private Hook, Nigel Green's solid Colour Sergeant Bourne - are all characters you remember for the rest of your life.

Throughout the movie, John Barry's stirring music score helps move things on with its persistent rhythm and its strong use of the brass section. The tension is kept up throughout the attacks and we don't need to be shown gore to know that killing is a messy business, so Cy Endfield doesn't show us it. It's left to our imaginations, which are more powerful than anything that Make-up can produce.

As the Zulus turn to leave, the tension is replaced by relief as Richard Burton's Narrator tells us that 11 Victoria Crosses were awarded to the survivors.

Zulu is presented in widescreen 2.35:1 which is close to its original aspect ratio in 35mm print form. The 1080p High Definition transfer is very sharp indeed. The fact that the film was originally shot in Super Technirama 70 would partly explain this as well as the more dense colour and almost absence of grain. With this process, the 35mm film went through the camera gate sideways (like Vistavision) instead of vertically, thereby doubling the picture negative area of Cinemascope.

Speaking of colour, it's stunning. The bright red soldier's tunics, the deep blue skies and excellent skin tones are very pleasing to the eye. Both the British and Zulu warrior skin tones are rendered well against the backdrop of the Drakensburg mountains. The black levels are nice and deep. The contrast is near perfect. There is no horrible 'ringing' due to image over sharpening. There is no dust or dirt on the print. All in all, this is one stonking, near 3D, transfer that's been handled with some care - as befits a film of this stature. The result is a handsome picture with an exceptionally good transfer.

I'd heard reports that some viewers had found the complexions waxy looking and blamed this on DNR techniques having been applied. I saw no evidence of this at all. Others have commented on the lack of grain in the picture and deduced that DNR had been used to remove it. Super Technirama 70 is more likely to have been the reason for this. I'd rate the picture quality at 8 out of 10. I have to say that the audio on Zulu is a bit of a disappointment. It's only in 2 track stereo. When it was originally released, the 70mm prints had a 6 track magnetic soundtrack. It's such a shame that those elements were not used for this Blu-ray release. The sound of the 'train in the distance' (which actually did use the sound of a train as part of the final mix) must be amazing in 6 track. Maybe they're planning an 'ultimate' collectors' edition with the surround sound restored for the future.

This isn't to say that there's anything terrible about the sound on this release, far from it. John Barry's powerful theme (which was based on Zulu chants recorded in South Africa) is well represented in stereo here - and Richard Burton's crisp opening and closing monologue gives the film added gravitas. The crackle of the flames on the burning wagons during the panning shot of the aftermath of the slaughter at Isandlhwana is uncomfortably 'in your face' or in this case 'ears'. The 'singing contest' between the Zulus and the Brits, led by Welsh Opera star Ivor Emmanuel (as Private Owen) is extremely rousing and causes pride to swell in the chest. The sound field really opens out here to maximise on the effect.

Overall, I'd score the sound at 7 out of 10 - just because the elements exist that could have made it a 10 and were not used.

Is Zulu Blu-ray Worth Buying

Overall, the Blu-ray release of Zulu contains an excellent High Definition transfer of a magnificent film that should take pride of place in any collection. The picture quality hits you right between the eyes from the opening shot and doesn't falter throughout the movie.

The only 'let down' is the fact that we could have had a 6 track stereo soundtrack if a little more effort had been put into finding the original audio elements. As it is, the 2 track Stereo is just sufficient. Maybe it was down to money - as so many things are.
The Extras are well worth having as they include personal recollections from those involved in the production.