Familiar, obvious and base, yet oddly satisfying and genuinely funny 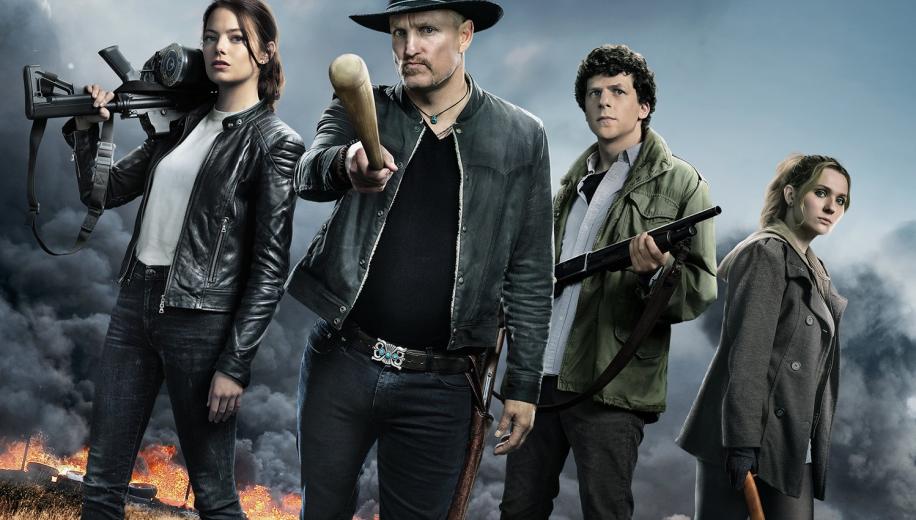 When you love something, you shoot it in the face... So it doesn't become a flesh eating monster.

Zombieland: Double Tap (is released and) is set 10 years after the events of the first film. Not much has changed in that time and the film plays out quite safely in terms of character beats, narrative twists, last second reprieves and relying on familiar territory. New characters are introduced with ease, a new zombie evolution idea is shown but not explored, nor really capitalised on, and the whole plot idea is simply recycled, while the comedic elements are based around stereotypical characterisation and aim pretty low. However, despite all this, the film manages to maintain a positive feeling, and is, in parts, genuinely funny.

The pace is high, the comedy low and whilst it might not break new ground, at least it remains faithful and enjoyable

During the intervening 10 years, our protagonists Tallahassee, Columbus, Wichita and Little Rock have not only become experts in dispatching zombies, but have also decided to set up ‘home’ in the deserted Whitehouse. When internal wrangling sees Wichita and Little Rock hit the road and then Little Rock, leaving by herself, Tallahassee, Columbus and Wichita head out on a rescue mission in which they discover a whole new breed of unstoppable zombies, Elvis’ actual shoes and Babylon, a hippy sanctuary with no weapons. The pace is high, the comedy low and whilst it might not break new ground, at least it remains faithful and enjoyable.

There is a good amount of detail in this image, from skin texture to the intricate carvings of Elvis’ pistol, from the overgrown Whitehouse to the garish décor of the Elvis motel, from the highways to the windows of Babylon’s tower; there are keen edges held throughout. It is with the WCG and HDR where the real benefit is seen, colours are rich and vivid, the neon of the motel, the painting of Babylon’s gates, indeed the whole of the hippy commune colour scheme is a delight, while the brightness of the fireworks pierces the night sky. Flesh tones are very natural, while you can almost feel the heat from the oranges during the explosions.

Black level is terrific, with decent shadow detail, adding strong depth to the image; check out the lights atop Babylon tower at night, while the white scale gives defiant highlights. Look, again, at the fireworks, tremendous stuff.

Digitally there are no compression issues and the source is pristine. In all, a lovely looking image.

The English DTS: X track is awesome making good use of the surround environment. The action scenes fare best, the climactic defence of Babylon especially so, with the noise of the zombie horde, the circling of the monster truck and the layering of the music giving an all-encompassing aural experience.

The DTS: X track is awesome

Dialogue is clear and dominated by the frontal array, though there is a bit of directionality when required. Bass is tight and deep, adding to effects, such as gunshots and explosions, remaining under control, if not quite subterranean, though the Italian scene was something special. The score is well layered and also makes use of the overhead channels, while quieter moments remain effective with ambience.

There's a hefty chunk of extras split up over the 4K disc and Blu-ray.

Zombieland Ad Council – 30 seconds on planning for the apocalypse

A hefty chunk of extras

The Doppelgängers – 7 minute feature concentrating on Thomas Middleditch and Luke Wilson's characters in the movie.

A Day with Bill Murray – 3 minutes with Murray's character and performance from the first film and his cameo in the second.

The Rides of Zombieland – 4 minutes looking at the various vehicles used in the film.

Rules for Making a Zombie Film – 9 minutes with the cast and crew discussing their own ‘rules’ over the film making process.

Zombieland Ad Council – As above.

Zombieland: Double Tap may have taken 10 years to hit theatres and may tread familiar ground, be fairly basic both in terms of story structure, character beats and comedic elements; yet it remains constantly positive, engaging and enjoyable despite its obvious flaws. All the cast return and show they have lost none of their verve, making the sequel a decent companion piece.

The package from Sony is pretty good

As a 4K UHD, the package from Sony is pretty good, the upscaled image is bright, well detailed with strong colouring and a good black level, while the DTS:X surround track is engaging, well detailed with tight bass. The Extras package is a wee bit light, but does cover some good bases.