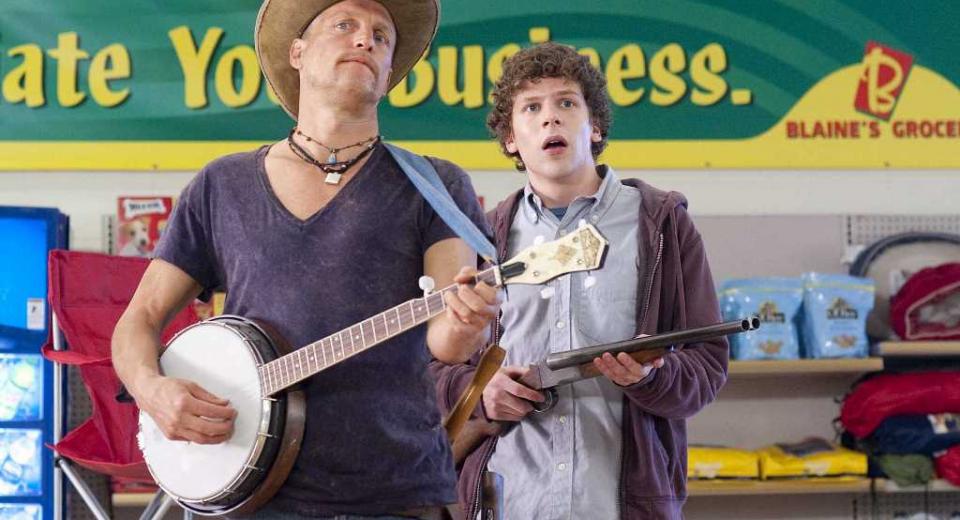 Zombieland, for me, is like Left 4 Dead brought to life on the Big Screen, and infused with the same humour that you would find in the likes of Superbad (or any other Apatow/Rogen-esque endeavour). For those unfamiliar with the specific game, it's concept will still probably be familiar in general theme to ideas across a whole bunch of popular zombie films over the years: basically it takes a few disparate individuals who have survived some sort of zombie apocalypse, and has them run around a dystopic US landscape searching for food, transport and fellow survivors, encountering numerous raging undead humans along the way and killing them in increasingly imaginative ways. And for those unfamiliar with Superbad, basically the dialogue here is bitingly sarcastic and throws in plenty of modern pop culture references. Although played straight, the characters are naturally witty as hell - and the combination of this humour and the superb 4-player zombie-killing action makes for a thoroughly entertaining sleeper hit entry in the somewhat over-populated genre.

It's been dubbed as 'Pride and Prejudice with zombies, for the Facebook generation', and has become the top-grossing zombie movie in film history. For me it'll always be Superbad meets Left 4 Dead, but whichever way you look at it, Zombieland is a whole load of fun. It may not be desperately scary, nor relentlessly gory, but it packs enough punch in the action department and has some thoroughly endearing characters for you to follow on what is, effectively, a zombie-laden road trip.

Zombieland, as much of a sleeper hit as The Hangover was last year, is a whole load of fun, a rollercoaster ride of a movie, stylish, packed with comedy moments played seriously, engaging and colourful characters brought to life by a decent and well-chosen cast, and good, old-fashion zombie-butt-kicking action. It breathes fresh air into an extremely popular but also extremely over-populated genre, and is the closest thing Hollywood has done to compare to Shaun of the Dead. Highly recommended.

Unsurprisingly given its superior sense of style, Zombieland comes presented with a tremendous 1080p High Definition video presentation in the movie's original theatrical aspect ratio of widescreen 2.4:1. Detail is excellent throughout, with absolutely no signs of softness. Edge enhancement is non-existent and clarity prevails. The colour scheme is broad and vivid, with plenty of bright reds, yellows and blues, the unusual settings used well to give us a particularly visually attractive offering. Black levels are also superb and the darker indoor or night-set sequences often exhibit the best aspects of this presentation. The freeze-frame moments are really almost poster-quality, the frequent CG green-screen background effects largely blending seamlessly into the proceedings - you only know that they're effects because of the scale of things. We even get some noticeable 3D pop thrown into the mix. It's an outstanding presentation, especially considering that this is a bit of a medium-budget sleeper hit and not some insanely over-priced Hollywood blockbuster. On the aural front, things are pretty exemplary as well. We get a tremendous DTS-HD Master Audio track which pushes all the right buttons. Dialogue comes across clearly and coherently, whether it be Tallahassee's Southern slang or Columbus's witty narration, largely emanating from the fronts and centre channels. The effects are extremely well-observed, the snarling zombie cries, the dull thud of blunt instrument against skull, the powerful thunder and subsequent body shredding from a shotgun blast - it all comes across accurately, giving the surrounds plenty to do, offering up some dynamics and basically bringing your living room to life. And if you think it's just the more powerful, gun-related moments that get keen coverage, you'd be wrong - the atmospherics are superb too and arguably it's the smaller nuances that really make the track so immersive. The score is punchy and perfectly suited to the material, and gets keen observation across the surround channels. Bass work is pervasive, and overall this is a superior little number, especially considering the material that is on offer. Picture-in-Picture
First up we get a complete Picture-in-Picture Behind-the-Scenes Video Commentary thingy called 'Beyond the Graveyard' which slaps a fairly chunky second screen within your viewing scope, upon which you get to see all kinds of production material, from effects sequences in various stages of completion (which are either blocky 3D, expensive CG, or green-screen shots) to cast and crew members in b-roll footage and interview. The offerings aren't always contemporaneous with the on-screen action, sometimes overlapping because there's quite a lot of behind the scenes information about some scenes and perhaps not others. The information on offer is far more technical than even the driest standard audio commentary, but all of the video snippets playing along the way make things a little more interesting.

Audio Commentary
We also get a full-length Audio Commentary by the Director Ruben Fleischer, who is joined by stars Woody Harrelson and Jesse Eisenberg, as well as Writers Rhett Reese and Paul Wernick. Fleischer takes centre-stage, the others chipping in with one-liners and questions occasionally. They often discuss the on-screen action, Eisenberg's jokes and Harrelson's drawl being easily recognisable throughout. It's not quite as engaging as you would have hoped, however - perhaps as a consequence of having too many cooks contributing - but fans will probably want to dip in and out of it to pick up the gems of trivia that are on offer.

Featurettes
In Search of Zombieland is a quarter-hour behind the scenes Featurette that offers up some further background into the production, complete with requisite interview snippets, b-roll footage from the set and intercut final film clips. It's not wholly redundant - it's interesting to hear how they originally planned Zombieland as a TV show (which the franchise is touted to eventually evolve into, after a couple of sequels) but much of the material has been covered in one form or another through the other Featurettes.

Zombieland Is Your Land runs a few minutes shorter, and focuses more on the imaginative sets used to bring the dystopic post-apocalyptic zombie setting to life, from the theme park setting for the finale to the Native American Indian store than gets wrecked. They look at the effects used to make the abandoned freeway segments look real and at some of the small-scale sets created as well, like Columbus's apartment.

The Visual Effects Progression Featurette showcases four really brief effects shots (all about 30 seconds long) in their various stages from design to final image. The most fun one is the seatbelt woman who goes flying and skidding across the ground, and they dissect the scenes well here, even if this is distinct watch-once stuff.

Deleted Scenes
We get a skimpy 6 minutes' worth of 7 Deleted Scenes, and again most of it is watch-once stuff. Originally, instead of the Double-Tap Rule, the filmmakers wrote about the 'Zip Bag' rule (as is mentioned on the PIP track) and we get to see that in action, although it's about the best of this vaguely interesting bunch of excised material, and even then it is clear why they dropped it.

Trailers
We get Trailers for the main feature, as well as for last year's effects extravaganza 2012, cult classic sequel Boondock Saints 2 and flop comedy Year One. Is Zombieland Blu-ray Worth Buying

Left 4 Dead meets Superbad in this successful US attempt at zombie comedy à la Shaun of the Dead. A superb sleeper hit, this one hits just the right spot, with colourful characters, engaging performances, an entertainingly wacky style and a hilariously witty script. Oh and increasingly over-the-top zombie-kills. On Region Free UK Blu-ray we get excellent video and audio presentation, and a hefty selection of extras for fans. This one comes highly recommended, and I can't wait for the recently announced sequel and potential spin-off TV series. Quality.