A film that does exactly what it says on the tin 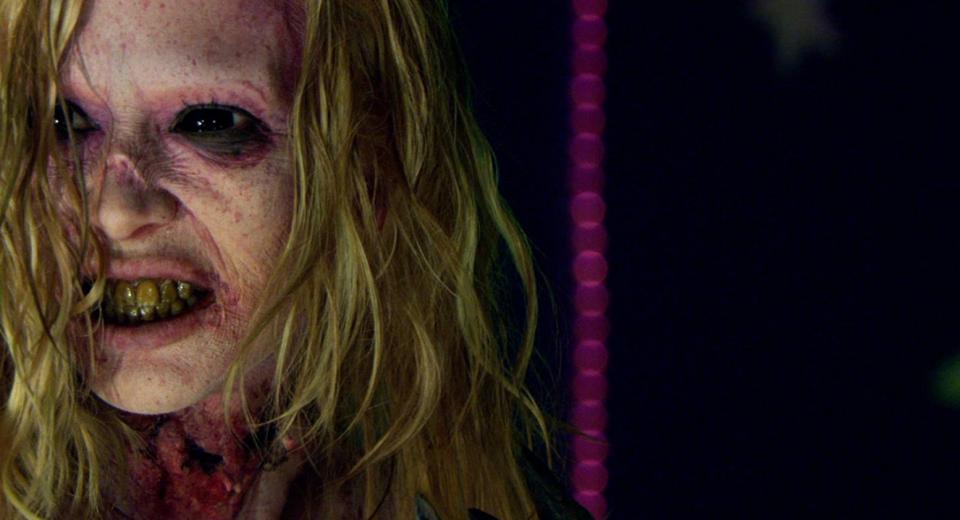 We begin in a satirical way, that looks not unlike a Verhoeven film. We are watching a news broadcast just as Bush has been re-elected and the US Army is stretched thin due to it's commitments across five simultaneously running wars. This is happening in the near future, as is evidenced by the ticker across the screen (Rolling Stones embark on Steel Wheelchair retirement tour III) which showcases moments of sharp comedy.

Once she puts on the show of a lifetime however, the watching men erupt in a frenzy of excitement and applause. One unlucky punter is told he is cute and taken backstage for extras. When she goes down on him however, the result is not exactly what he was expecting - and a series of events are unleashed which are predictable to say the least. And this, put simply, is all there is to Zombie Strippers. Women dance, take men back stage and eat them. Repeat, ad infinitum. Nothing more, and most certainly nothing less.

So, there you have it. A film that does exactly what it says on the tin. A film that initially dazzles with clever ideas and satire, but very quickly manages the unforgiveable feat of becoming rather repetitive and boring. A film that shows so much style and clever direction at the start, but quickly runs out of ideas, and uses the women as eye candy to disguise the lack of plot. To be fair, if you decide to watch this film, you are not expecting high art and you may well find this entertaining.

I wasn't exactly expecting a great deal from Zombie Strippers 1080P, theatrically correct, 2.35 : 1 ratio transfer. The film is low budget, so I wasn't expecting a knockout transfer. I was therefore very pleasantly surprised by what unfolded in front of my eyes. The most obvious feature is the bright colour palette visible within the transfer. Zombie Strippers has no time for moody, atmospheric ambience. This is a bright and vividly shot film, full of primary colour - and the transfer brings this out perfectly.
Depth is present within the transfer, but is not as pronounced as it can be in the best transfers, and detail is generally good. Black levels are not as deep or as dense as would be ideal, and the image is generally rather soft compared with the sharpness we know the format is capable of delivering. I have not seen the DVD, but cannot imagine that the Blu-ray is considerably sharper. Skin tones look rather waxy, and I suggest that there is a hint of DNR applied to this transfer, which does rather interfere with the natural quality of the image. The image is much better than I expected considering the low budget nature of the film, but it is certainly not up to the high standard of most recently released films on Blu-ray.

Zombie Strippers comes to Blu-ray with a Dolby TrueHD sound mix, but like the picture (and indeed the film), the sound mix neither stuns nor disappoints. It is just mediocre. The dynamics of the sound just seem rather lacking. There are no great problems with the overall mix - dialogue is always clean and easy to hear, and the music and effects are well mixed in with the speech. However, the general soundscape just isn't well balanced. There is very little in the way of front panning, and also very little rear action. The film does open out occasionally - and when it does it is very impressive, but it is too infrequent to really impress. The LFE is also rather lacking. There is certainly no great bass punch in this transfer and there will be times when you wonder whether your sub is even working. As mentioned before, though, the sound dynamics seem to be the major problem. Everything manages to sound rather tinny and harsh. Whether this is a deliberate intention on behalf of the director it is difficult to know, but this is one of the weakest areas of this disc. Zombie Strippers contains everything from the SD release, alongside some Blu-ray exclusive. Sadly, all the extra content is displayed in SD which is a shame for such a recent release.
The audio commentary is great fun. The director, Englund, Jameson, and one of the other actors (Joey Medina) contribute and they do a fine job - making it clear that an enormous amount of fun was had when making the film. They do provide some entertaining (if not detailed) insight into the film, and the whole commentary is a joy to listen to.

Two featurettes explore the film in some more detail, and are reasonably entertaining - but are still a little shallow, running only 13 minutes in all, and we get 40 minutes of deleted scenes. These are a mixed bag, but some of them are excellent and well worth watching. There is an optional commentary option here.

Blu-ray exclusive extras come in the shape of Blu-ray live technology, which is as poor as ever, and a very entertaining pop up trivia track which is excellent and very entertaining. This is probably the best extra on the disc.

Is Zombie Strippers! Blu-ray Worth Buying

Zombie Strippers does exactly what it says on the tin. If all you are interested in is watching strippers perform for men before eating them alive, then you are going to get everything you want from this, and more. The problem is, that the director starts off bursting with ideas that threaten to lift the film above its roots and gives us a surprisingly clever level of humour and satire. He very quickly changes tack, however, and manages to present us with endless scenes of “erotic” dancing and chewing down on human flesh that actually manages to be boring - which is quite an accolade considering the subject matter.
The picture is a merely average transfer, and the sound is extremely poor indeed - sounding thin and poorly defined. All the extras from an uninspiring SD disc are included, alongside a couple of HD extras, one of which (the pop up trivia track) is excellent. Sadly, the bottom line is the film is just not enjoyable enough to sustain your interest through to the end. It has such a promising beginning it is a shame that the director lacks the wit to produce something that could have been original. It is highly unlikely this would pass muster even as a stand by disc for a boozy night in with your mates. However, how can you not be at least interested, given the title and subject matter. My suggestion? Hide it under a nice bulky box set, and rent a copy.