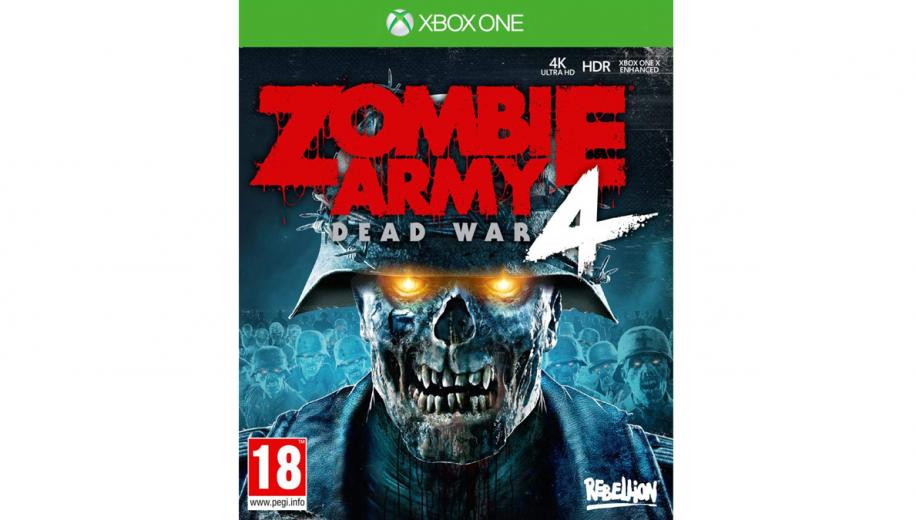 Over the years any action fan will have killed an awful lot of (virtual) people. Or monsters, aliens and just about anything else that dared to wander into our collective crosshairs. Probably top of the kill count would be Nazis and zombies – and so when Rebellion combined the two into a fun spin-off of its successful Sniper Elite franchise, it proved a classic combination in the form of Zombie Army. The previous three games didn’t stray far from the classic formula and neither does Zombie Army 4: Dead War. There’s been a story of sorts but no-one really cares. This time around you don’t even need to pay any attention to the brief dialogue that gives you a reason to head out of your current safe room in order to kill hundreds more of the undead. And probably Zombie Hitler, because he just won’t take death lying down.

While still leading with a sniper rifle as your primary weapon, there’s a bit more of an arcade flair to the action these days. This is mostly for the better as you’re free to mix and match your playing style as you see fit – as long as the end result is still a blood-soaked trail of dismembered Nazi zombie corpses.

The action takes place in an alternate 1946, this time mostly around southern Italy with Rebellion making the most of its existing Sniper Elite WWII assets – notably with the classic X-ray Killcam slow-mos, but also with the return of Karl Fairburne as a lead character. With the game fully playable in 4-player co-op – as is the returning Horde mode – you can also pick from three others, each with some nominal pros and cons in terms of their skillset.

Playing with friends is probably the best way to enjoy Zombie Army 4 – if only so that not every single enemy zeroes in on you! That said, the game is nicely balanced for single players as well and so lone wolves can equally enjoy the game at their own pace. Obviously having a slow and steady sniper style isn’t always going to fit with another player who charges into danger with a machine gun – but when you do get a team that fits, it can give the action that little extra edge. Your choice of weapons is rather limited, but this is in keeping with the series’ style. With a rifle and pistol in place, your only real choice is whether you pick a machine gun or shotgun as your secondary death-dealer – but you can swap them out on the battlefield, as well as finding some heavy weapons that bring a lot of fun to the party. From here on out the goal is simple: kill a hell of a lot of zombies.

Part of the appeal of the Zombie Army franchise, besides how much it revels in not taking itself seriously, is that you can mix and match those playing styles. We tended to err on the side of the long-distance sniper, particularly in the early stages. However, with a trusty trench gun as back-up we also found ourselves mixing in some run-and-gun flair.

Part of the reason to move with a little pace is that you’ve got a combo meter tied to an ongoing scoreboard. Although there are gold medals up for grabs, you don’t have to care about getting a good score – but it does give you a different motive for approaching a section, and the potential for some healthy replay value. We mostly took things slowly, hunting around for the many collectibles, but on a second playthrough we could just go on a bloody rampage, equally fuelled by our growing appreciation for the use of the various grenade types on offer.

This is helped by an impressive progression system, with plentiful perks, mods and upgrades to unlock via in-game finds and through levelling up your character. In the early stages, our encounters with ‘Elite’ enemies, such as those armed with flamethrowers or heavy machine guns, were slow and involved lots of running in circles as they soaked up bullets and tore through our health bar. By the end of the game we sending them back to hell with just a few well-placed rounds. There is definitely something of curve in terms of your ability to deal with the incessant stream of undead. In some places the horde can be infinite, at least until you complete the required objective, and you can find yourself being pushed back or running in those same circles we did. However, the flipside to this is that you can also rack up some huge combos, with enemies usually dropping enough ammo to keep you ticking over if you’re not near a refill crate.

Although the nominal storyline is played straight and the action never veers towards over-the-top arcade silliness, Zombie Army 4 does have a lot of great touches that can make it a lot of fun. There are plenty of Easter Eggs and other things hidden away, while many are much more open. The bulk of the latter can be found in the environmental traps that are handily scattered around each location, in addition to the usual array of ‘red barrel’ explosives.

Requiring a single bullet to spring into life, they range from dummies that distract zombies, to electricity fields or whirring blades of doom – peaking with our personal favourite the zombie shark, which would chomp through anything nearby once we’d fired a little electricity into its rotting veins. These can also play into the game’s replay value as we found several spots where we battled through with a shotgun, only to find two cool traps just around the corner we’d missed completely. Next time that fight went very differently…

Elsewhere there are some great visual tricks to mess with your head, most notably the many creepy dolls you’ll find appearing, disappearing and reappearing as you move through buildings. At one point, we saw two of them looking cute on a chair, only to turn around seconds later and see one holding the other’s dismembered ahead. We’d also like to give a nod to the Sticker Album that celebrates an array of mini in-game challenges being met and gave our Panini-fuelled childhood a heart-warming nudge.

“Survive the Zombie Horde” is something of an over-used objective

As much fun as slaughtering streams of Nazi zombies can be, that really is pretty much the whole game. Although there are a few welcome changes of pace and scenery, you’re still mostly just fighting from one restricted battle arena to the next. “Survive the Zombie Horde” is something of an over-used objective and, though still good fun and a healthy challenge to your skills, there can also be a sense of ‘oh, this again’ each time you see ammo and grenade crates just before you enter a large area with a mission marker in it.

The lack of easy access to medkits is countered nicely with a takedown system that gives you a decent health boost. Along with some handy slow-motion or headshot-friendly meters for your weapons, this fills up after a sequence of kills and can be a hugely satisfying way to battle your way back from a near-death experience. Tied with a Vampyr Scope for our rifle and a divine melee attack that also grant a small health boost, medkits were usually our last resort. Despite the odd glitch that would see black bars appear as if for a Killcam slow-mo that never loads into place, visually the game is pretty solid, with a healthy 60FPS on the Enhanced/Pro versions that holds up to the constant carnage with ease. Perhaps most impressive are the animations of the stumbling zombies who’ll fall from buildings or slump over obstacles in their incessant desire for a brain sandwich. Although clearly cloned to justify the thousands you’ll wind up killing, it’s surprisingly less likely than we’d have thought to spot identical enemies tied into the same animations in a single fight.

The game is split into nine chapters, most of which are divided into four sections, breaking the game up into handy bite-size chunks. This works nicely because, arguably, Zombie Army 4 isn’t really a game that can be enjoyed in long playthroughs. As mentioned, the combat can get repetitive as there’s not a lot of variety to the mission structure or gameplay other than that which you’re free to impose yourself.

This does mean that Zombie Army 4 is probably better suited as a game to dip in out of (with friends if possible) and there is a definite replay factor – whether it’s just aiming for higher score, tracking down the last of the collectibles, meeting the many in-game challenges, aspiring towards weapon mastery or just levelling up your character for better rewards and an easier life on Z-street. At the final credits, we were only at level 38 out of 100, with further ‘Prestige’ status for every 100 levels after that, and it took until maybe Chapter 7 before we started unlocking the really good stuff.

Horde mode is a welcome addition without really bringing much that’s different, as the same ‘kill lots of zombies’ mantra applies to the main game. The only difference here being that the map starts small but opens up every few waves, moving ammo crates and bringing new traps into play. There are also Weekly Events to test your skills, which add new parameters to the existing chapters, such as playing a Chapter with infinite primary ammo but no secondary weapon, and lots more post-launch content is planned. Zombie Army 4 can be a hell of a lot of fun, with some rock-solid combat that makes the blood-soaked rampage through the undead mostly enjoyable. Though absolutely clear in its intentions, the downside is that the game can also become repetitive and even somewhat tedious in places, perhaps making it something to enjoy more in small doses.

With a decent campaign that can range from 10-20 hours depending on how much exploration you want to add as a side-dish to the slaughter, there’s also plenty of potential for some healthy replay value. Certainly we were happy to track down all the collectibles and smash our high scores – as levelling up brings upgrades and rewards that make life that much easier the more you play.

While not for everybody, if you just want a fun shooter that doesn’t take itself too seriously but does give you a ridiculous amount of bad guys to plough through in a hugely satisfying manner, Zombie Army 4: Dead War is something we’d happily recommend.