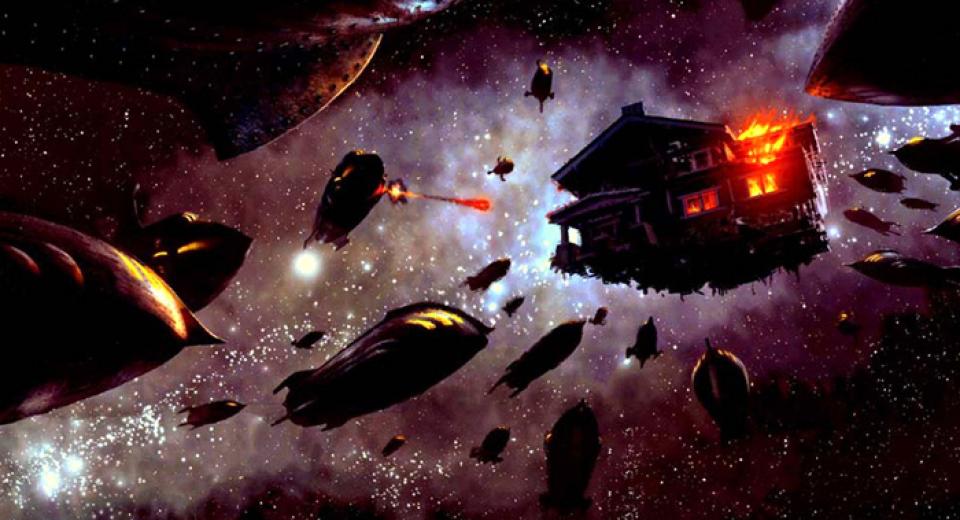 Danny (Jonah Bobo) and Walter (Josh Hutcherson) two brothers that are constantly bickering, much to the annoyance of their recently divorced father (Tim Robbins). The pair cannot agree on anything, Walt, the elder at age ten sees his younger brother at age six and three quarters as nothing but an annoying brat, constantly berating him for his behaviour. Danny, meanwhile, feels inferior to his elder brother but at the same time wants to play with him. The pair also jostle for their fathers affection, anyone who has suffered through divorce or separation can relate to how hard such situations are for all concerned. When dad has to go out to the office to replace a poster accidentally ruined by the boys fighting, the pair are left in the charge of their teenage sister Lisa (Kristen Stewart) who wants nothing to do but sleep in bed 'preparing' herself for her date later. After a particularly spiteful trick played on Danny, he finds himself in the cellar and on his way back spies a colourful game box. Taking the box upstairs Danny insists he wants Walt to play, though Walt wants nothing to do with him. The game is Zathura, an old windup tin game that is much more than it seems. After turning the key and setting the game in motion the entire house is transported into outer space where the occupants are menaced by meteors, killer robots, carnivorous reptilian aliens and their own inability to get along. The only way home is to finish the game, but when every turn unleashes a new terror will they have the courage to continue and finish what was started.

The disc has a theatrically correct 1.85:1 aspect picture that has been anamorphically enhanced for widescreen TV's and mastered in high definition. The detail level of the picture is excellent, foreground and back all are mastered with a pin sharp edge. Even the smoke held up even when zoomed in. The pallet tends towards the warm side and this is translated and bold rich reds and yellows, suitably thick. Contrast and brightness were set to give highly deep blacks, due to the pallet did tend towards the red, though this was probably intentional. Digitally there were no compression problems and only the merest hint of edge enhancement. Such a modern film means no original print damage but it did contain some film grain, quite noticeable in places. This is all excellent, however, I must note that on my normal viewing platform I found the picture to be quite dark and at times jerky when panning, a common side effect with progressive scanning on some systems. When I tried the disc in my second (cheaper) player on a full screen 4.3 28” TV the picture was not as dark (TV is set up for a bedroom) or as jerky, just something to be aware of. Absolutely no problems with the sound though. The disc has been given an English Dolby Digital 5.1 and a French 2.0 Dolby Digital surround track. Right from the off the English track gets all the speakers filling the room. As a whole the mix isn't overly aggressive as per some action films, but it is equally as immersive. Adding to the atmosphere created by the dark corridors/basements the sound mix makes full use of each speaker to give an overriding sense of unease, a creak here, a knock there, excellent stuff. Dialogue too is given directionality should it be needed, has a nice level and always audible. There is a full range with decent level of bass and some terrific LF effects. I was very impressed with this mix, never over the top, but always making the best of the sound stage, perhaps not one to test out the nuances of your system but one to show off what 5.1 can sound like if done well.

The French surround is one of the best I've ever heard, with excellent frontal separation and plenty of rear ambience, it rivals its 5.1 brother in quality and loudness, very impressive. To compliment the film there is a full array of extras covering all the aspects, a very impressive package running at nearly one and a half hours, what is more impressive is that there is virtually no padding with film clips in any of the features. First up there is the feature commentary by director Jon Favreau and co-producer Peter Billingsley. There is plenty of information given by the pair all with relevance to the on screen action. Particularly like the info on why Stewarts part is so small, because she was written in as leaving two boys that age alone a house would be considered irresponsible! Whilst the pair hardly pause for breath there delivery is rather dry and monotonous and I found this hard work listening too despite its appeal.

Next up we have Race the Black Planet which is an overall making of the film and it covers a lot of detail in its run time. A large portion is devoted to the insistence of Favreau to use practical effects, that is visual effects on set rather than rely on GC, a decision that ultimately make the film something special, with a large section apportioned to the use of the gimble on which the house was built. This meant that they never shook the camera, they moved the house and the film looks all the better for it. There are interviews with all the major cast and crew in this terrific little feature.The Right Moves concentrates on the story of the film and the adaptation of Allsburg's original story and Favreau's take on it. Again there is plenty of information here with interviews from everyone that had an input into the film.The cast featurette concentrates on the actors of the film, how they were chosen and has plenty of behind the scene information. What comes across is that the two boys really had a ball making the film and it was their chemistry that really makes it all work. Nice little segment about prosthetic teeth made for Jonah Bobo so as to keep correct continuity.

Miniatures details the large scale models that were built for the film, from the house to the Zorgon ships. I've always thought models look so much better than CG, and always look so much better when supplemented by it. This is exactly what was done on Zathura and when you see the models in the behind the scenes material you can really appreciate the skill of the artist, much information and a very worthwhile watch.

World according to Chris Allburg is an extended interview with the author and artist. He speaks very readily about his past, his inspirations and about his work. There are plenty of his pictures to view as he talks. It is an interesting listen to an interesting man.

Zorgons robots and frozen Lisa details all the work for the film completed by Stan Winston creations. The made all the practical monsters, the Zorgons and the robot, by a combination of on set practical suits and supplementary CG. It is the reason why the effects look so good, especially the movement of the robot. It has real weight when it moves, and that is because it has real weight because it is there. There is a lot of detail on the model made for Lisa when she becomes frozen, not quite so interesting this portion, but other than that this is another excellent little feature.

Making the Game details the design and manufacture of the Zathura board game, there are interviews with the concept designers and model makers whose job is was to make Favreau's vision into reality. What I find quite extraordinary is the amount of complicated mechanisms that were needed to make this relatively simple game work, after all such things did exist in a bygone age and they worked quite happily without the need for sophisticated computers! However another enjoyable extra.

Finally there are previews to recent releases and DVDs but I don't count those. Zathura seems to be splitting its audience, much as it has split my family. There are those that adore the film and can't get enough of it (my kids) against those that think it is a little too complicated and deep for a kids film and too wild to be taken seriously and as such it remains uncomfortable in the middle ground (myself). However there is no denying the spectacle, there is much to see and if you switch off much to enjoy, the more I get to see it the less I worry about its short comings and I think Zathura may find its biggest audience in the DVD market. As a DVD package, they don't come much better, with a great picture, top notch sound and enough quality extras to keep everyone happy this has to be one of the best value DVDs out there. And because of that I do recommend this title.