"You said the age of heroes would never come again." 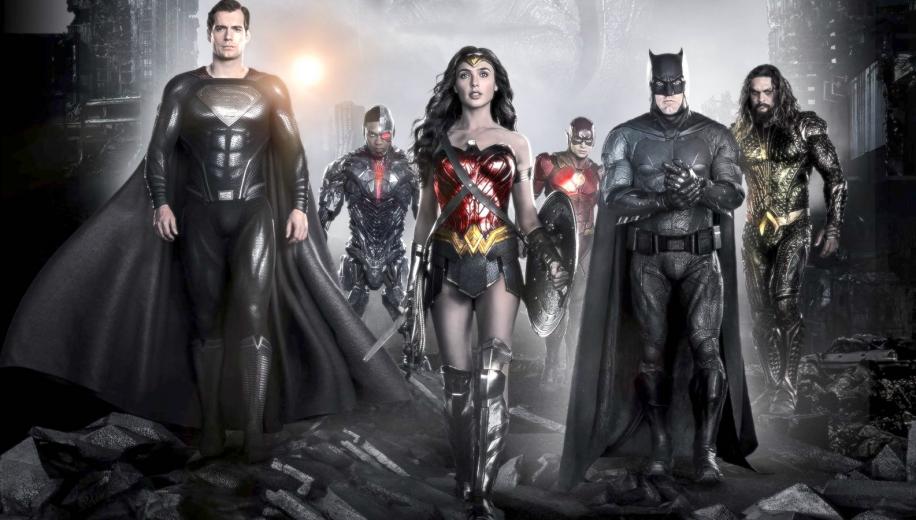 Attempting to right a great deal of wrongs, this impossible fan dream is a hell of an experience - a visually striking epic of untold proportions that simply has to be seen to be believed.

Snyder's Justice League is an entirely different animal to Whedon's 2017 version. Not just a little bit different. Not just a few extended scenes. It's a completely different movie, which happens to share the same basic plot but is wildly divergent in terms of build-up, characterisation, meticulous, well-paced story plotting, visuals, scoring, action and sheer R-rated impact. Whedon's version feels like a badly-edited pre-post-production extended test audience preview for this final product, by comparison. There's likely never been anything quite this staggeringly different in the history of cinema. Sure, Brian Helgeland returned to his Mel Gibson Payback thriller to deliver a very different version with an entirely new third act, Leone's Once Upon a Time in America is allowed room to breathe in its 4 hour form, Costner's messy Waterworld is gifted a tangibly epic scale in its 3 hour version, Ridley Scott's additional 45 minutes transformed the deeply flawed Kingdom of Heaven into something far closer to a master work, the 37-minute-longer Alien 3 'assembly cut' is a revelation that reintroduces an entirely new mid-section, and the Donner Cut of Superman II takes a very different turn (albeit more familiar due to the plot beats which were used for the end of Superman) but ultimately none of them can hold a candle to Zack Snyder's Justice League, which delivers a staggering THREE HOURS PLUS of new footage.

Snyder has been given the room to do whatever he wants

It's not perfect and, boy, it was never going to be. There was too much wrong from the start - from the mistakes made in previous DC entries, to the fact that all of these characters demanded their own solo movie first, not afterwards. Flash is still ultimately miscast, Batman still deserves his own movie and his own moment (c.f. Hulk in Endgame), Green Lantern's still conspicuously absent, and this lack of solo introductory films feels like an impossible obstacle to surmount. But the extended format still works absolute wonders for a lot of this and, unlike perhaps Snyder's Batman v Superman: Dawn of Justice (even in its considerably better, longer form), there's less of a feeling of multiple stories being crammed into one movie this time around. Sure, it takes 4 hours to weave this damn tale, but it's still one long story at the end of the day, not a number of disparate ideas desperately glued together because nobody wanted to give this franchise room to breathe.

Snyder has been given the room to do whatever he wants. Take however long he wants. Go R-rated with brains being cracked open on rocks, limbs and heads lopped off, headshots splattering the walls behind them, and F-bombs dropped liberally. New effects to bring the true Big Bad, Darkseid, into the fold, to make Steppenwolf a worthy opponent, or Cyborg a formidable League member. Hell, even shoot a couple of new scenes if he wants, just to complete his vision. And it may not fix all the movies before it (his movies), those that arguably - even in their extended home formats - didn't have this kind of privilege. Nor will it fix the damage from the waves made by those decisions. But it's far better than anybody could have possibly ever expected. A proper director's labour of love, the likes of which we haven't really seen since the excessive days of the 70s but a clear example of where an auteur, unfettered by the influence of the studio, can deliver a work of art worthy of some substantial appreciation. Now, if only we could travel to a multiverse where this version of the film gets a sequel.

It's a gorgeous, visually opulent production - as you would only expect from Snyder - and this native 4K presentation makes the most of it

A relatively rare native 4K superhero blockbuster (alongside the recently remastered "IMAX" version of Batman v Superman: Dawn of Justice Extended Cut 4K), Zack Snyder's Justice League looks frequently jaw-dropping. It's no surprise really, he's a tremendously visual director, with a ludicrous amount of the runtime dedicated to slo-mo shots which - somehow, impossibly - be mostly makes work. It's an utterly immersive experience in 1.33 native 4K, watching Aquaman walk slowly down the pier as the waves crash down on him from both sides, seeing Darkseid take on all the Legends of old, watching Steppenwolf leap the height of the screen to take out the Amazonians - for all those who endured it on NowTV (or, at best, Sky) - this is such an upgrade, delivering stunning detail (Steppenwolf's rippling spikes, the armour of the Amazonians, the insane amount of background nuance to the Flash intro), palpable texturing, and superb clarity throughout.

Sure, there's no Dolby Vision here, but HDR and WCG come into play very nicely indeed, making Flash's electricity pop with intensity, bringing Darkseid's fiery hell to life, making Batman's blast-absorbing gauntlets glow, and affording Wonder Woman's lasso a fantastic energy. Yes, of course Snyder has bathed the piece in a borderline monochromatic palette (and folded in Batman v Superman via the revisited colour scheme he added to the recent 4K 'IMAX' version of that) but arguably that leaves the moments of pop even more standout, with very specific elements gifted strikingly vibrant prioritisation, and absolutely popping off the screen against that sober backdrop, with frequent ripples of red Parademon blasts and blue Flash energy, all cast against a deep and inky black backdrop. It absolutely leaves the Sky/NowTV presentation in the dust. It's a gorgeous, visually opulent production - as you would only expect from Snyder - and this native 4K presentation makes the most of it.

Zack Snyder's Justice League 4K Blu-ray enjoys an excellent 3D immersive object-based high definition surround sound audio track too, in the form of Dolby Atmos, making for one hell of an engulfing experience to marry up to the visual majesty of this piece.

... one hell of an engulfing experience

Dialogue gets keen prioritisation, rendered clearly and coherently throughout, from Batman's growled tones to Steppenwolf's processed intonation, whilst Tom "Junkie XL" Holkenberg's score provides some exceptional moments - often revisiting flourishes from previous DC scores, but nonetheless providing superb accompaniment to several sequences that feel like mini Music Videos (with a series of song tracks further populating the production). Of course, it's the coverage of the effects that really defines the piece, bringing to life some truly epic landscapes, and memorable setpieces, from Superman's death cry over the opening credits to the percussive 300-esque (re-)introduction of the Amazonians, to the LFE-laced thrum of the Mother boxes and all of the energy weapons, with the key battles affording a thunderous delivery, expansive in its immersive, dynamic treatment, and booming with underpinning bass. If we're nitpicking, it's not quite as blow-you-away as the Batman v Superman Atmos track, which may well still be in audiences' minds after the recent "IMAX" release, but it's still a pretty damn excellent effort.

The main feature is generously split across two discs, with no additional extra features apart from a single Featurette, although it's something of a bonus just to have this 4 hour cut in the first place.

... it's something of a bonus just to have this 4 hour cut in the first place

The only real annoyance comes from the fact that the Justice is Gray edition - the black-and-white version of the movie - is only available as an extra when purchasing a digital copy of the movie. However much of a gimmick this alternative version may be, the very fact that they didn't bother including it here but do include it on the digital release is cheeky, to say the least. On the plus side, those interested in finding out whether or not it's worth their time can finally check out Justice is Gray on Sky/Now TV.

Zack Snyder's Justice League was years in the making, something of an impossible unicorn to many, finally released to surprising critical and audience acclaim and, at the very least, universal agreement that it was significantly better than Whedon's 2017 cut.

... a bittersweet example of what the DC Universe could have been

Warner's UK 4K release of Zack Snyder's Justice League is something of a surprise itself because there's currently no announcement about a US counterpart on the format, leaving this excellent 2-disc 4K release a likely highly desired import the other way around for once, what with its stunning native 4K video and Dolby Atmos. Highly recommended, for those who had given up on the DC Universe, somewhat understandably, this one's well worth investigating in as a bittersweet example of what the DC Universe could have been.