A very personal work by Coppola 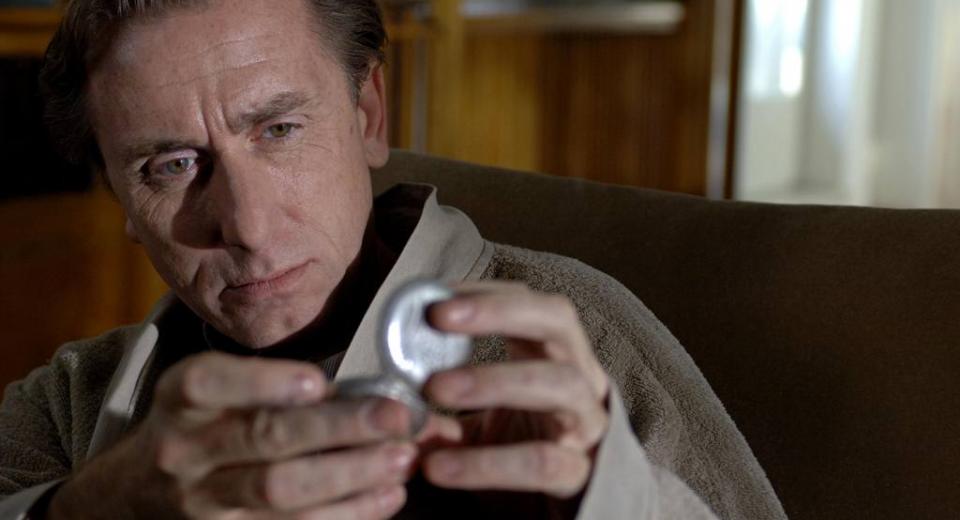 Set in the late 1930s, Dominic Matei is an elderly Romanian college professor teaching his students, looking into the origins of language and forever remembering his long lost love of 50 years ago. He feels he is ridiculed and he knows he will die alone; to these ends he decides on a trip to Bucharest to end his life. Ending his life far from his home not to stir up any scandal which his name might be associated with.

On arriving during a thunderstorm he is hit with a bolt of lightning, raised off his feet and thrown back to the ground horribly burned beyond recognition. Whilst he should have died he recovers only to find that he is now apparently some 30 years younger, he has the body he enjoyed when he was in his late thirties or early forties. Obviously the medical community are astounded and would like to study Matei to find the cause, the ever advancing Third Reich also want him on loan for study to see if he can help their pursuit of the ultimate human race. Matei himself wants none of this though, only to carry on his work into the history of language itself, he also finds his mind has grown in power. Where once he would have to spend years researching topics he finds he can assimilate books through simple touch, he also finds other powers which come to his aid.

On the surface this film can be enjoyed as a thriller where the protagonist, superbly played with deep passion by Tim Roth, has the opportunity to relive part of his life, to correct some of the mistakes he made in the past and due to his ever increasing mind and knowledge to finally complete his work and find the true origins of language and by association the origins of man's own intellect. As he embarks upon this trek he knows he will be sought out, the Nazi party only needing him for their own ends and even the Americans, represented and briefly played by Matt Damon, offer him solace and protection; again though ultimately for their own ends. As he continues this journey and ultimately starts a love affair with a woman who might indeed be a reincarnation of his long lost love the viewer feels incredible pity for Matei for both losing the things which he loves and for the strange journey his life becomes after his lightning strike.

Youth Without Youth has a spring in its step at it comes up to the plate with a 2.35:1 1080p MPEG-4/AVC encoded disc. The image itself is wonderfully shot with certain scenes bathed in swathes of subtle colour. The warming golden yellows of his recuperation at an isolated hospital, the chilly blues as he talks to his alter ego in the depths of night; both are beautifully rendered on this disc without a hint of banding in those fine gradients.

Camera movement was kept to a bear minimum for this feature and so the viewer has every opportunity to explore the detail in every frame. That detail is certainly there; Matei's initial college study, the Nazi doctor's laboratory has an incredible amount of information showing the various machines and instruments; the landscapes around the sanatorium, the text on newspapers flashed onto screen (every word is pin sharp) stands out and can easily be read. Colours are vibrant with reds and greens particularly strong. Matei's charred body is shown in all its horrific glory whilst the lush greens of his sanatorium leap off the screen with their vibrancy.

The print is clean and completely blemish free; in the darker blue-lit scenes there is some appearance of grain to be found although you would really hardly notice its fleeting presence. The contrast is acceptable with whites strong in the snow and on some of the vistas, darker scenes also fair well with good shadow detail and nothing lost to the far corners of a cave, a study or a laboratory. Youth Without Youth is an excellent image, which due to the fine detail, and colour fidelity will grace any collection, and almost hit that reference mark. It is let down ever so slightly though to some slightly distracting enhancement issues which whilst never too prominent nor intrusive stand out a little only due to the excellent quality of the rest of the disc.

The audio track will stun you and your system into silence form the very outset of this film. The opening condensed scene includes audio of the inner mechanics of timepieces and this audio will fill your room. Predominantly emanating from the fronts and extending well and deep to the surrounds and sub this has to be one of the best TrueHD openings I have ever heard from a film. You are immersed in sound; it flows freely round you and from speaker to speaker with complete confidence.

The duality of Matei's personality encourages the use of separation when he is talking to himself and controlled audio is a perfect vehicle to add dynamic to these scenes. It is used gloriously during these moments with voices coming from where you would spatially expect them to be. At these times the dialogue is crisp and detailed with nothing eliminated because they are not centre based.

Equally the score is predominantly frontal, wide and expansive almost enveloping the viewer. Strings come across particularly well with the almost mournful yet light tones drifting outwards and to the surrounds. Other surround use is infrequent but when in use contributes well the immersive feeling and pulls the viewer into the heart of the feature.

The first featurette is pretty much redundant, Coppola having covered most of the ground in his must listen earlier commentary. It is the second and third which are the most important and out of these for me the makeup one was the most interesting piece; giving insights into certain production work which I had not thought about too often before.

I would have loved a piece on Mircea Eliade himself though as it seems that a better understanding of this man and his works would provide valuable insight into the strands Coppola was trying to portray in this film. Unusually the end credits are also mentioned as an extra and they do not play in the normal course of running the film. Along with this oddity there are a few trailers.

To say this is a personal film is an understatement; it is personal to the degree that someone said that perhaps it would just be Coppola himself who would enjoy and benefit from viewing. They may be right. Personally I feel there's more to this than has currently met my eye and I will persevere with it.

The acting by Tim Roth is excellent and, along with Gary Oldman, one of our country's finest acting talents of this generation. He has weight and adds weight to this role and it demands it; the film demands nothing other than a solid performance and Roth shows he has a wide range of emotions. His shuffling as his old self, even when grown young again, is handled with ease; his depth of emotion is more than apparent as he again meets the love of his lie and ultimately again has to loose her.

But it might just be too personal for I am sure that many will find it inaccessible and at times incomprehensible and that in itself could just be a waste of a definite good story with some major philosophical values hidden under the surface. I can recommend the film because it is an interesting watch; it's just that the film will polarise opinion and some of you will enjoy it and some will not. The film has potential but I believe will take repeated viewings to get the best from it.