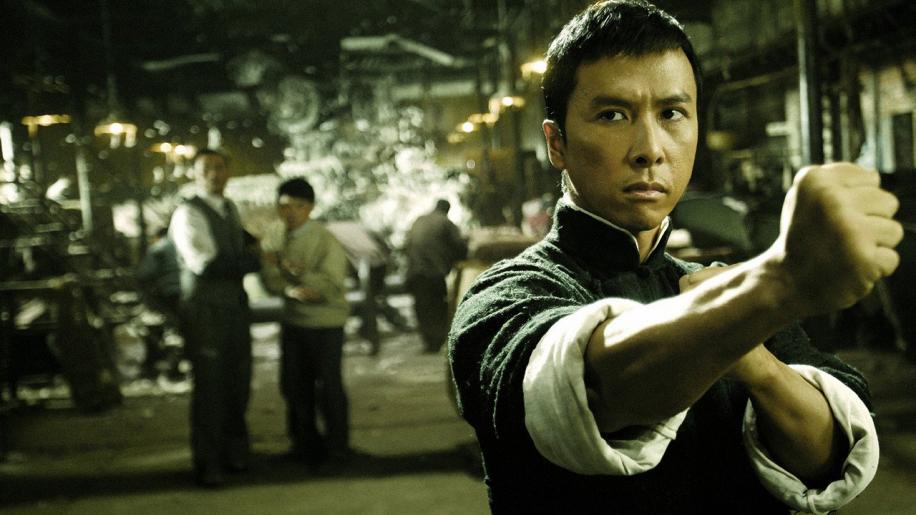 The kung fu genre will always lie in a somewhat skewed position in the action film landscape. In many ways its style and feel predate those of the modern action thriller, thus it is judged by differing criteria. Whilst the average explosion filled bullet-athon can be held against the yardstick of the Die Hards of this world and other such more modern fare, the present day martial arts offering will always draw comparisons to its more aged brethren. For some, the picture is not complete unless it harks back to simpler times when Shaw Bros and Golden Harvest peddled out numerous punchy pieces every year and the traditional slapping sound of punches was adorning each strike. For others, this spiral towards often more kitsch and unrealistic tales was not what was needed for the films themselves to finally gain greater acclaim. Into this scenario stepped a young man named Bruce Lee. An unconvoluted and stripped down style, coupled with restrained acting (though some perhaps would question whether he could even be termed as an actor) and tales that weren't always set in a remote dusty China of long ago helped propel both him and the genre as a whole into the mainstream.

What has since followed has been a branching of the cinematic offerings into distinct groups. Wire fu was long established before Crouching Tiger, Hidden Dragon truly brought it to Western attention and Jackie Chan continued to push into a field that was all his own, mixing comedy with stunts and feats of daring bravery. The presence of Lee has never truly left the imagination of the fans though. Thus it is not entirely unsurprising to see anything relating to the man explored more deeply. This brings us to the film that is Ip Man. To those with little knowledge of the man (no pun intended), he is perhaps best known in the West as the tutor of Bruce Lee. A fact that alone guarantees a certain amount of marketability in this part of the world. However he is more than just this simple tagline for those of the East as he transcends this branding as a master of kung fu in his own right. For those interested in kung fu beyond its cinematic offerings, he is a standout figure on the landscape. Born in the late nineteenth century in Fo Shan, a city within the Guangdong province of Southern China, he went on to become the first master to openly teach the wing chun style.

In many ways this legacy leads us back into the realms of action cinema; follow the lineage of the style back further and we see he was the last student of Chan Wah Shun, who himself was a student of Leung Tsan, a man immortalised in two of the most revered wing chun kung fu films, Sammo Hung's Warriors Two (1978) and its prequel The Prodigal Son (1982). The connections to Ip Man, this film and the style do not stop there, as the action director for this cinematic tale of the master's life is none other than Hung himself. Thus we can expect the fight choreography to be tight as the bloodline of this film is indeed strong both in terms of content material and the talent of those bringing the duelling fists to life. With Donnie Yen taking the central role, being one of the foremost Eastern action stars of the present day, and teaming up for the fourth time with Wilson Yip as director, the team behind this starts to look stronger still.

The story opens with Ip still being a young man and living a peaceful life with his wife and child. They reside in the city of Fo Shan district, famed for its population of kung fu masters and martial arts schools. He is clearly fairly affluent as his house attests, being resplendently furnished with finely polished tables and decorative vases. He appears a figure of charm and sophistication with nary a hair out of place. Even his early duels leave him unflustered as they are for the most part fairly mild mannered affairs. During the first act of the film, the majority of the time is spent establishing his character for the audience and his standing in the community as a whole. He is presented as a gentleman unprepared to laud his excellence at kung fu over his fellow masters or even advertise his skills at all. He takes no students and does not make his living from teaching the wing chun technique or martial arts in any way. In many ways this first half hour or so serves merely as a prelude for the main meat of the narrative that is to follow. It does include a couple of well shot and choreographed fights to keep viewers' attentions held in place, but these, like the man at this point, are quite restrained in nature. They show his prowess with his fists, yet he barely breaks a sweat and they don't offer the true tension that one craves for from a martial arts epic. Only the second battle hints at a slightly darker edge that may come to the fore as his assailant draws a sword. This too though is quickly batted away with relative ease and the mood of calm dignity is once again clear for all to see. There are a few dwellings during this period on his role as a father and where his time should be spent, but they are all too brief to really add to the story at this point. They do however help to break up what could have been a filmic version of beatification and allow us to see this figure as predominantly human - a feature all too often missing from such films, often eschewed in favour of raising folk heroes up to superhero status as one might argue of the various big screen outings of Wong Fei Hung.

The mood of the narrative shifts dramatically as in one sweeping segment we are told of the Japanese invasion of China. The ensuing montage is understandably bleak and jars quite rightly with the previous half hour. The world of Ip Man has been affected devastatingly also, with his house being requisitioned by the invading army as a headquarters and the kung fu master being left homeless, residing now in a war torn desolate building and living hand to mouth. This section helps to further establish Ip as not only fiercely proud and mentally, physically and spiritually strong in his demeanour, but also as a potent symbol and in this case a cinematic metaphor for the Chinese people as a whole. There are numerous instances of lines involving the citing of the shame that should be felt by those who cooperate with the Japanese as well as characters speaking of their kinfolk as an almost unified entity. Make no mistake, this is a very patriotic piece, with the invaders depicted as masochistic and sub human creatures carrying just enough hint of three dimensionality to avoid the trap of truly seeming little more than cartoon villains. The benefit of this darker tone of the second act is the unbottling of Ip's emotions and thus his fighting style is allowed to burst free in a quite stunning encounter as he battles ten black belts at once. Gone is the restraint of the earlier figure, who cared more for the appearance of his demeanour. What we finally get to see is the raw power of the wing chun style when its potential, and that of Ip's mastery of it, is unleashed with great venom and fury. What was a bloodless piece quickly becomes soaked during this key moment of the story. The direction of the duelling combatants is for the most part handled with enough panache to place this within the realm of other modern kung fu tales, yet manages an entirely welcome degree of plausibility to its action scenes. Wirework is not used to raise characters to superhuman heights and the primarily more grounded style of wing chun is well respected in its treatment. If anything, the one criticism one might have of the battles is that they are perhaps a little too traditional. The two key battles between our hero and the Japanese martial artists are both contained within a set arena. This not only restricts what, if any, implements might come into play, but also the degree to which characters can move. There is no landscape to move around and thus every ounce of movement must be captured and emphasised with spins of the camera and accompanying sound effects.

Ultimately, Wilson Yip does a sterling job with the material he has to work with. He manages to wring out the emotion from a tale that will no doubt be far more familiar and pertinent to a Chinese viewer. Watching from a Western perspective puts one aside from the patriotism in much the same way as this Englishman might feel witnessing Gibson's The Patriot or Braveheart. This cannot be classed a criticism, just a simple fact of life. The story, to a certain degree, transcends nationality and boils down quite simply to one of invader and invaded. The few bullets that do get fired have a resounding impact and in one instance prove pivotal to the plot, but for the most part this is a hand to hand affair. Sammo Hung clearly knows how to choreograph wing chun action as the taut nature of the fights will testify. They are tight and guarded affairs to start with but perfectly reflect the central character's emotional state as they explosively become more brutal. The few sub plots of brotherly love and those who seek to exploit their people are all too brief but do help to lift the emphasis in part from what could have become a very linear story. It may not have the wow factor of the wire fu epics but I can only applaud the film for staying true to a form of grounded kung fu and allowing the physical prowess and expertise of Yen to be the focus as opposed to a stunt department replete with winches. That he puts in his best performance and shows that action stars can actually act with a degree of finesse and complexity was an unexpected delight. It may not topple the wing chun pillars of Warrior's Two and The Prodigal Son, but it is still entirely worthy of a viewing and arguably stands as a more complete and cinematically mature tale.