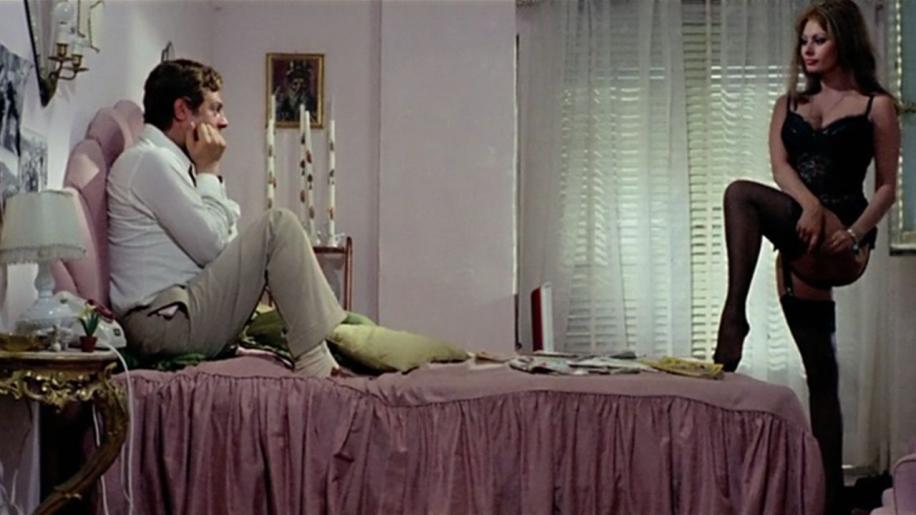 Vittoria Di Sica's triplet of tales are presented here on Eureka's disc in the original 2.35:1 aspect. The SD transfer is sourced from what looks like a robust print and age-related damage is, thankfully, kept to an absolute minimum. There is a lot of grain about, though this seems to clear up a fair bit as the three stories go on, and there are a couple of tiny frame jumps, but nicks and scratches are remarkably few and far between. I saw two instances when a bright white flash appeared in the right half of the image, but even this glitch lasted for only a nano-second ... so, no worries there. Curiously, the image quality discernibly lifts a few seconds into the second story as Loren's rich-chick, Anna, drives through the city, thinking aloud to herself ... and this better-looking picture then remains for the duration.

Whilst the contrast is quite high, resulting a few blooming whites, particularly during the first story, the image is quite colourful and bright. Blacks aren't a major component of such a sunny disposition, but, when called for, they are certainly stable and deep enough. The spectrum actually seems to improve, tale by tale. Primaries are bright and can, occasionally, border on gaudy, but the overall aesthetic is cheerful and vibrant. The most colourful and vivid tale, strangely enough, is the one that spends most of its time indoors - Mara, the final vignette. Loren is definitely at her most luminous here. Dresses, hair, décor etc - all look quite well saturated and blues and reds and certainly bubble with energy. Elsewhere, greens can appear a little shabby and masked - I'm thinking of the grass and trees alongside the road during the middle segment. The fruit on show - especially the oranges that Carmine lets slip down the path in Adelina - have a keen vibrancy, however, and even if the movie does have that worn-down feel about it, it still seems able to come up with a dazzle here and there.

Detail is also a touch variable. Background information is blurred but not to any point of distraction or even disappointment. Boats in the harbour or far-away cars and buildings are hardly going to draw your attention when Loren is basking front and centre anyway. And those essential close-ups and middle-ground images are mostly on the ball. Again, detail seems to improve as the film progresses. So, whilst Adelina is still fine when it comes to the ramshackle buildings and rustic streets, the picture offers more once we climb aboard Loren's Roller in the second story, and then much, much more in the final episode. Scenes set in Mara's apartment and in the “ecclesiastical” boutique stand out as there are so many more objects and bric-a-brac to survey. Skin-tones and facial detail are good, though not exactly scintillating. Loren's Mara is the best treated by the transfer - those eyes really do lift from the screen, even with the lack of high-definition.

Sadly, the image is dogged by edge enhancement, though, and this has a tendency to become more pronounced around objects and characters seen against lighter backgrounds. This check disc also had one of the clumsiest layer changes that I've seen in a long while. But, on the whole, I would say that the new UK disc does a very reasonable job of bringing this little-seen Italian gem to home video.

I'm giving this a 6 out of 10, but rest assured, there are no issues here that should put you off purchasing it.

Please note that you can play the movie with, or without subtitles.

The original 2-channel mono audio track is fairly reproduced here on Eureka's disc. There is a variable degree of background hiss throughout the entire film, though this does not hamper the dialogue or the score from Armando Trovojoli at all. Speech can be a tad on the tinny side of things, but remains clear and discernible. Voices and noises - ambience, car-horns, hustle and bustle etc - possess some small amount of presence, but the muted, somewhat suppressed nature of the original audio is probably unavoidable. So don't expect miracles.

Beyond this, there really isn't much else that can be said. Yesterday, Today And Tomorrow may not be the crispest track around, but it still does the job well enough to help you enjoy the movie.

Sadly, we are without any extras on this release.

Always interesting, oddly amusing and daftly compelling, Yesterday, Today And Tomorrow is a wonderful showcase for the talents of both Loren and Mastroianni. Whilst the middle story breaks with what is, otherwise, the quirky and humorous tone of the two tales either side of it, the overall trilogy forms a terrific feel-good experience that skips across Italian culture with finesse, bedecks itself with technical innovation and directorial flourish and makes constantly witty observations on love, romance, sexual politics and inter-personal ideology courtesy of an adroit and quasi-satirical screenplay. With Loren looking positively heaven-sent throughout and matching her bewitching looks with a trio of performances that are equally mesmerising, the film is effortlessly easygoing and surely breezes by on an intoxicating waft of Mediterranean air. European sex-comedies were rife during this period, but De Sica's triumvirate here manages to be innocent and titillating at the same time, embracing issues and attitudes with a level head and a vaguely surreal ambience that lifts each tale up and out of the environment that houses it.

Eureka's uncut edition looks reasonable enough on this SD disc, although the transfer will never win any awards. The lack of extra features is unfortunate, but unsurprising - we are just lucky enough to get the full movie at long last, and should be thankful for that. Thus, I can heartily recommend this release for a languid, colourful frolic that draws you in and even, at the end of it all, leaves you thirsting for, perhaps, yet another tale featuring these two immortal stars.

Come on, now, let's see if we can get a release of 1957's Boy On A Dolphin, Sophia Loren's lustrous US debut.