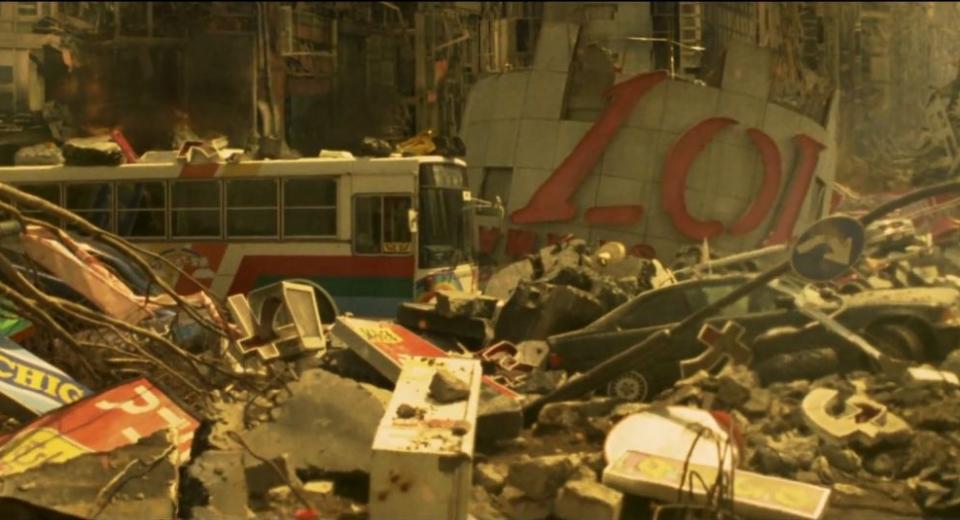 Fans of the genre will certainly have little cause for disappointment when it comes to the visual quality of Yatterman on Blu Ray. This MPEG-4 AVC encode is presented in its original 2.39:1 aspect, and the 1080p presentation is excellent. To say it's colourful is an understatement. Rich and vibrant with strong primary colours, coupled with extravagant psychedelic manga style backdrops it's like visual candy floss. The sets are a mix of greys, blues and blacks, making the colourful costumes really pop with bright vivacious pinks, purples and reds. Blacks suffer ever so slightly and with a lack of contrast, greys and blacks occasionally bleed into one another at times, but it's really nothing to worry about. Shadow detail is fair, but you'll find the eye constantly drawn away from the darker colours, almost making them feel as though they're there to provide the startling contrast for the big and bold primaries. Skin tones are soft and natural, if a little pale, but this feels intentional, and could very well be in part, to further accentuate the hugely colourful palette. Grain is minimal, which is not surprising really given the predominant CG nature of the content, and overall, detail is sharp and striking against the wonderful imaginative and dark backdrops. It's easy to point at the compositing of CG with live action shots, as this leaves rather a lot to be desired at times, often looking very flat and cartoon-esque, but it doesn't seem misplaced given the overall tone of the movie itself.

The quality of the DTS-HD Master 5.1 track is good. Dialogue is very strong and never gets lost amidst the many action segments of the film. Sub-woofer is slightly over-used at times, however high frequencies do not disappoint, delivering a crisp and snappy tone. The surround field is somewhat underused, failing to give the non action scenes any depth with room ambience or reverbs to the rears, but comes to life in the action scenes with zipping robot parts flying around and booming debris dropping around you. There's a distinct lack of foley throughout the film, perhaps intended, but this at times makes the audio track seem slightly sparse and empty. Ambience is very low in the mix generally, but sound design is appropriate, if a little unimaginative. The music is low in the mix throughout, bar the musical set pieces. The musical quality is traditional to the genre, using synthesised instrumentation to present an orchestral score, but this lends a sort of tacky-ness to the whole audio presentation that although fitting for the anime style, seems to lower the overall qualitative results. Subtitles are white and easily legible. There's no background blending problems to speak of, and they seem to follow the dialogue reasonably accurately.

Sadly none of the extras are in HD which after the visual treat of the movie itself is a bit of a disappointment.

First up is a grainy and very low quality Japanese Trailer. It doesn't give very much away about the film, not surprising though as it's only 54 seconds long.

Next we have a Behind the Scenes featurette. Split into two sections. One showing 15 minutes of rehearsals and filming behind the scenes. We're talked through some of the green screen methods, and we get to see Miike and the cast and crew having what looks to be a great time filming.

Following this is a 9 minute piece on the set and costume design. We're shown the level of detail that went into the mechanics of the weapons and robotics, and we are talked through the concepts behind some of the set designs. It's clear that these extravagant sets were fun to work on and work in.

The penultimate piece is a Cannes film festival promo where we see Miike promoting the film and talking it up.

Finally, there's a stills gallery, showcasing some of the wonderfully colourful characters and scenes from the movie.

Overall, the extras are minimal, and low quality which unfortunately lets the whole experience down a bit. The lack of commentary is disappointing, as this would no doubt have provided some whacky anecdotes from the cast and director no doubt. Perhaps the inclusion of a bonus episode or pilot from the original series wouldn't have gone amiss for audiences not familiar with Yatterman, and may perhaps have gone some way towards helping those who haven’t seen the original series feel a little less like they're watching from the sidelines. Leaves a lot to be desired.

Conceptually extravagant, Yatterman transcends the gap between Live Action and Anime perfectly. It's a gob-stopping candy-fest of colour and imagination, that will either leave you feeling like you're crashing after a sugar rush, or with a sense of bewilderment at what just happened. For fans of Anime in general, this is an unexpected treat from cult director Takashi Miike, but a welcome one no doubt. For newcomers to the genre, prepare for a struggle as you attempt to wrestle any semblance of sense from the narrative. Dazzling visuals and explosive colour are the order of the day here, and though confusing and difficult to get along with for the wider audience, it hits its mark for anime fans worldwide. It's a satisfyingly ridiculous romp of unfathomable oddity, punctuated by the completely absurd. Sadly, it fails to be wholly accessible to a much wider audience. It is tailor made to tick the anime fan's boxes, but perhaps hit or miss to those less invested in the genre. Nevertheless, let the staggeringly vibrant colours wash over you like candy floss, and take the “touch and go” teenage toilet humour with a pinch of salt, and you're unlikely to be disappointed.