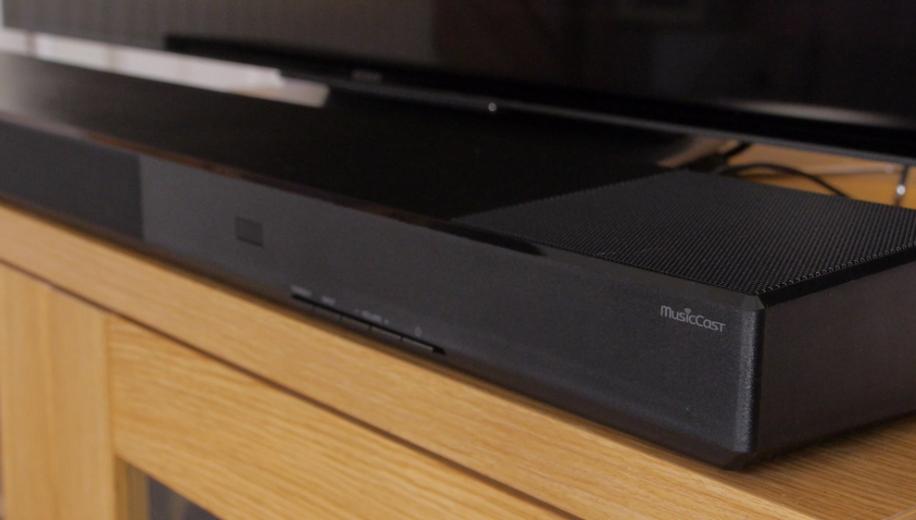 The YSP-1600 digital sound projector, aka soundbar, sits in the middle of Yamaha’s extensive range for 2016. It features 5.1-channel output, compliance with HDCP 2.2 video signals – meaning you can hook up Ultra HD 4K sources – and is also part of the company’s MusicCast line-up, so it can be used as a networked streaming audio player or as part of a multi-room system with other MusicCast products. At the time of publishing (June 2016) pricing for the YSP-1600 varies quite widely depending on the retailer you choose with some still charging the full suggested retail price of £499.95, while others list it for as little £349.00. Yamaha is pretty much the pioneer of the soundbar category and has been producing high quality variations on the theme for many a year, let’s see if the YSP-1600 can carry on this fine heritage or, better still, improve on what has gone before.

The YSP-1600 comes in a choice of two colours; the one we’re reviewing is black but there’s also a silver finish available although, of course, that’s not going to make any difference to how it sounds. The digital sound projector is designed to sit low, at only 6.5cm tall, so as not to get in the way of your TV's screen but if the Wi-Fi antenna on the back is raised to its fullest height, you can add another 7cm to that. Since the presence of the antenna is due to the inclusion of MusicCast and therefore solely intended to be used with audio only, we don’t consider that to be any issue. The YSP-1600 is exactly 100cm wide, so it will fit comfortably on the vast majority of AV furniture, and it’s 13cm deep which, again, should see it easily squeeze in to the majority of set-ups. The YSP-1600 is quite a weighty example of a soundbar thanks, in part, to the two built-in subwoofers which are upward firing and sit beneath two mesh grilles at either end. There’s another grille, front and centre, which exposes the eight ‘beam’ drivers, while the rest of the finish is smooth and matte black. To the left-hand side, as you look at it, are a collection of indicator lights showing what sources are connected and whether the surround mode is enabled, while to the right is the infra-red receiver as well as a rudimentary collection of control buttons for power, Bluetooth pairing, volume and input selection.

All the physical connections are housed in a recess to the rear of the unit and they’re a reasonably comprehensive set. There’s an HDMI 2.0 input, capable of carrying Ultra HD signals up to 60 frames per second, although it’s not fully compatible with Ultra HD Blu-ray players as is won’t pass the High Dynamic Range (HDR) metadata. There’s also an HDMI output with Audio Return Channel (ARC) capability, meaning you can use just one cable between the soundbar and the TV and have any source connected to the display outputting its sound through the YSP-1600. You will need to check the specifications of your TV to see whether it will pass more than two channels via ARC else you will only get stereo output via the Yamaha. There’s also an Ethernet port, which would be our choice if you want a stable network streaming environment, a Toslink digital audio input, a 3.5mm stereo jack, a subwoofer output and a USB port used only for software updates and not playback. As noted earlier, there’s also built in Wi-Fi in addition to Bluetooth for streaming from similarly enabled devices. The supplied remote control is not really anything special, in fact the build quality feels lacking in comparison to that of the main unit. All the buttons are rubberised and not especially satisfying to the touch and the top four rows are too close together, for our tastes, meaning it can be a bit fiddly to use, particularly in low light conditions. On the plus side, the remote has full control of every function available to the YSP-1600, including discrete buttons for all the inputs and sound modes, overall volume and subwoofer output and three buttons at the bottom to allow you to beam the sound at different angles. Without doubt, the headlining feature of the YSP-1600 is its ability integrate with Yamaha’s MusicCast system and you can read more about that in our dedicated review. The potted version, in case you haven’t the time, is that MusicCast allows you to create a robust and versatile network audio system with a single product or multiple Yamaha products carrying the branding. You can control all the devices from one app on your mobile device to play the same, or different, songs stored locally, on networked storage or even from various streaming apps, including Spotify, Napster and Duke. In fact, you’re not limited to music, you can play audio out through MusicCast from any connected device, although we see the usefulness for the likes of TV programmes and Blu-rays to be somewhat less likely. It’s also a cinch to setup and control and works seamlessly so we’d definitely encourage you to check it out The eight 2.8cm beam drivers built in to the YSP-1600 are designed to produce real, i.e. not simulated, 5.1 audio output in contrast to many of the competing products on the market. Beams of sound are time-aligned and directionally controlled using digital signal processing (DSP) and reflected off walls to create the surround sound. As noted above, you can also adjust the output to suit your room with three pre-sets on the remote and it can also be done using the phone app. The Yamaha is able to accept and play both DTS and Dolby Digital 5.1 signals. The YSP-1600 is also DLNA certified, compatible with the latest HDCP (2.2) standard and able to pass-through 4K signals.

The audio quality of the Yamaha YSP-1600 is really very good indeed, regardless of what you to choose to throw at it. We began testing with a collection of movies, moving through some general TV viewing, topped off with some music and we’d be hard pressed to pick fault with anything save for a little lack of clout with low-end effects. Provided your room is of a fairly standard shape, i.e. square- or oblong-ish, you should benefit from the 5.1 output with movies (and some TV shows) with sound bounced to surprisingly good effect from the walls to create the rear channels. In no particular order, we sampled very convincing helicopter effects from Apocalypse Now, squally and fairly terrifying storms in Everest, spaced-out dialogue in Gravity and utter sonic mayhem during Mad Max: Fury Road with a very creditable sense of surround evident in each.

Looking back through the AVForums annals, this reviewer hasn’t actually reviewed one of Yamaha’s 5.1 channel digital sound projectors before – and has to admit to a certain degree of scepticism that they could really work - but they do. We wouldn’t go so far as saying that a soundbar could ever be a replacement for a true 5.1 speaker set-up but if you haven’t got the room, or inclination, to have one of those then the Yamaha is probably the next best, affordable, alternative out there. In fact, as alluded to above, the thing we probably missed most from a standard 5.1 speaker system was the lack of dedicated subwoofer because, although there’s nothing wrong with the in-built dual subs, they just aren’t capable of plumbing to the frequency depths even a cheapish standalone can. Fortunately, there is the option of adding one via the output jack on the rear and that’s probably what we’d do if it was going to be in permanent residence.

Yamaha's expertise in the sector is evident
Where a dedicated subwoofer wasn’t missed, in the slightest, was with music playback. We’re normally fairly critical of run-of-the-mill soundbars in terms of this duty but, again, the YSP-1600 proved surprisingly effective here. The stereo, i.e. straight, mode is the one to choose for your music – don’t be tempted with the Music pre-set - and it provides a really decent sense of separation and excellent clarity of tone. Leonard Cohen’s Tower of Song, Led Zeppelin’s Dazed and Confused, Sloop John B by the Beach Boys and John Grant’s plaintive Glacier all sounded great through the YSP-1600; the electronic treat that is New Order’s Technique album proved so good that we just had to listen to the entire thing. The components in the Yamaha were also more than capable in highlighting the superiority in TIDAL’s lossless streaming over that of Spotify and there’s few soundbars that really do that in this price bracket.

At current prices, the Yamaha YSP-1600 is a great buy in the sub £400 soundbar category. The build quality is top notch and connectivity options, including an HDCP 2.2 compliant HDMI input capable of accepting 4K signals up to 60 frames per second, are almost equally as solid. You also get integration with Yamaha's excellent MusicCast system, turning the YSP-1600 into a networked audio streamer and/or part of a multi-room audio system. This 5.1 digital sound projector also lives up to its name by actually being capable of producing sound behind the listening position, courtesy of eight 'beam' drivers that can be adjusted for different room layouts. It's equally at home with movies, TV and music, too, so whatever you throw at it, the Yamaha sounds accomplished and refined. The only negatives we can mention are a somewhat cheap feeling remote and that the system can sound a little thin in the bass department with those low frequency effects in movies, although you can add an external subwoofer if you like, but that doesn't stop the Yamaha YSP-1600 from coming Highly Recommended.

The first soundbar that came to mind as an alternative is the Q Acoustics M4 which is highly comparable in terms of sound quality and costs roughly the same but it lacks HDMI connectivity, if that’s important to you. Also priced at £349 is the Samsung HW-K550 which doesn’t sound quite as accomplished as the YSP-1600 in terms of its all-round capabilities but it does have HDMI connectivity and slightly more low-end thanks to a dedicated wireless subwoofer. The Cambridge Audio TVB2 is another one to consider and that sports 4 HDMI inputs, sounds comparable to the Samsung and is priced at £329.