At last a receiver with built-in WiFi 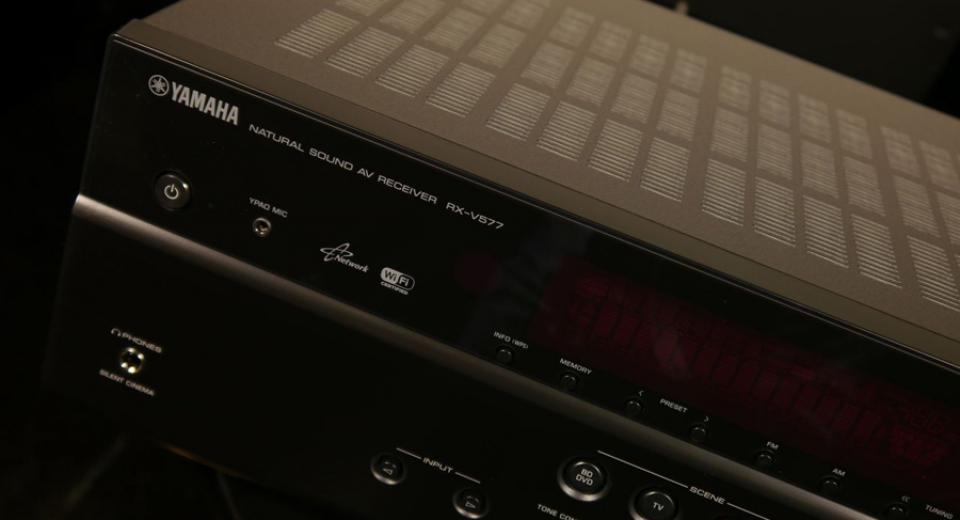 We've seen some very effective networked receivers recently but none of them have included built-in WiFi.

Quite why that should be the case remains a mystery but thankfully we're finally starting to see AV receivers released with WiFi built-in. Now that wireless networking has essentially become the norm, it doesn't seem unreasonable to expect receivers to also include this capability, especially as the manufacturers are keen to add AirPlay, Spotify and DLNA. Nobody really wants to be running cables around their house and as wireless connections improve there really shouldn't be any need to break out the drill.
Some manufacturers have offered WiFi adapters but, as we discovered with Pioneer, these can often be difficult to actually setup. Yamaha's new RX-V577 is a 7.2-channel receiver with built-in WiFi. It has support for AirPlay, Spotify and DLNA, along with a remote app and HTC Connect. There are a total of six HDMI inputs and support for ARC, 3D and 4K. The V577 can also handle high resolution audio and uses Yamaha's YPAO sound optimisation feature. At just £499 it seems like great value, so let's find out.

Design and Connections of the V577

The RX-V577 uses the same attractive design as most of Yamaha's current AV receiver line-up, with a two tone aluminium front facia that has a glossy top half and a brushed metal lower section. In terms of colours you have a choice of black, titanium and gold finishes. The glossy upper section includes an informative and easy to read display, whilst the lower section has some simple control buttons and a few basic inputs, including a headphone socket and a USB port for iDevice support and charging. There is a volume dial on the right hand side but you toggle through the inputs using two buttons on the left rather than a second dial. The build quality is very good, the receiver measures 435 x 161 x 315mm and weighs in at a relatively light 8.1kg. The V577 had an attractive design, great build quality and a clean front facia.
At the rear there is a connector for attaching the WiFi antenna, although you only need to use this if the reception is poor. We found that the V577 was near enough to our wireless router to create a solid connection and we didn't need to resort to the extra antenna. Also at the rear are the connections, including six HDMI inputs and one HDMI output, along with inputs and outputs for composite and component video. There are also optical and coaxial digital inputs, an Ethernet port, analogue inputs and outputs and AM/FM antenna sockets. Finally there are binding posts for up to seven speakers and pre-outs for up to two subwoofers. The remote control is well designed and certainly simpler than the one that came with the RX-S600 we reviewed recently. The layout is fairly intuitive and the remote itself is comfortable to hold. Thankfully Yamaha have refrained from squeezing in loads of unnecessary buttons to confuse owners and overall we found the controller quite effective to use. Our only real complaint is that its black colour and lack of backlight makes it almost impossible to use in the dark; thankfully the free remote app came to our rescue.

The menu system on the V577 is fairly basic, especially when compared to some of the competition, but at least it's easy to follow and simple to navigate through. You access the menu by pressing the Setup button on the remote control. Once you're in the Setup menu, you have a choice of seven sub-menus - Speaker, HDMI, Sound, ECO, Function, Network and Language. Navigation is straightforward and the different menu choices are fairly self explanatory, so at least the menus should be too daunting to users. When it comes to setting up the V577 it's very easy and as soon as you connect the provided microphone, the automated procedure starts. You then just follow the instructions with regards to connection and placement of the speakers and put the microphone in the listening position. The receiver produces a series of test tones and takes measurements to optimise the setup and when it's finished you're ready to go. Yamaha's YPAO sound optimisation software is quite effective resulting in a reasonably accurate setup. For those who prefer a more hands on approach or just want to check the automated setup, there is the manual option which allows you to customise your setup as you wish. Setting up the built-in WiFi was equally as simple and all we needed to do was press the WPS button on our wireless router and the V577 did the rest. It was a breeze and made a nice change from all the hoops we had to jump through to get the Pioneer wireless adapter to work.
Setting up the V577 was very straightforward, whilst connecting the built-in WiFi couldn't be simpler.

Yamaha certainly haven't skimped on features when it comes to the V577, with seven channels of amplification and support for up to two subwoofers. There's decoding for Dolby TrueHD and DTS-HD Master Audio and a Burr-Brown 192kHz/24-bit DAC for all channels. There's a direct mode for high quality sound reproduction and low jitter PPL circuitry to help optimise sound imaging. The HDMI inputs support 3D and 4K pass through, along with CEC and ARC (Audio Return Channel).

The V577 also includes Yamaha's extensive digital signal processing (DSP) technology, including CINEMA DSP 3D, virtual CINEMA DSP, compressed music enhancement, adaptive dynamic range control and Silent Cinema. For the more traditional among you, there is also a built-in AM and FM tuner. Whilst the USB port on the front is designed for use with iPhones, iPods and iPads, and will recharge your iDevice, even when the receiver is turned off. As mentioned earlier, the V577 includes built-in WiFi, although if you prefer there is also an Ethernet port for a wired connection. The Yamaha is DLNA 1.5 certified and also supports AirPlay which allows you to stream from your Mac, PC, iPod, iPhone or iPad. The V577 can handle a wide variety of files including MP3, WMA, AAC, ALC, WAV and FLAC. In the case of the latter file types, the Yamaha supports 192kHz/24-bit audio playback for higher resolution audio.

There's also Internet Radio (vTuner) built-in, along with Spotify and support for HTC Connect. There's no built-in Bluetooth, which is a shame, but we guess you can't have everything; although would like to see manufacturers add Bluetooth to their receivers in the future because it's fast becoming a common way to stream music. However there is the optional YBA-11 Bluetooth adapter with support for the aptX audio coding algorithm, so it is fairly easy to add if that's important to you. As we mentioned earlier in the review, Yamaha's AV Controller app is excellent and among the best we have reviewed. It is freely available for both iOS and Android and can be used on either your smartphone or tablet. It's very well designed, slick and intuitive, making it a real alternative to the provided remote control, which is just as well since the latter doesn't have a backlight. Thus the remote app proved very handy when controlling the V577 in our pitch black home cinema. You have fairly comprehensive control and can perform all the main tasks via the app, including turning the power on and off, adjusting the volume, selecting inputs and choosing DSP modes. You can also customise the interface by hiding unused icons and renaming functions.
There are plenty of features including DLNA, Spotify and AirPlay; along with an excellent remote app.

The V577 proved to be a very capable performer once we finished playing with all the features and finally got around to actually testing its sound quality. After the straightforward setup, the receiver was capable of creating a well-balanced and tonally accurate sound field that resulted in a suitably immersive experience. The front soundstage was wide and open but dialogue remained clear and anchored to the screen. After a visit to Belfast, we found ourselves re-watching James Cameron's Titanic, and the V577 did an excellent job of reproducing that film's Oscar-winning sound design. As the great ship went through its death throes, the surrounds were filled with groans and creaks that panned seamlessly around the room, placing you in the middle of the action. The bass was also well integrated, giving some the films impressive set pieces real impact.

It was an assured performance from a company that really knows how to make good receivers and whilst the V577 might not be over-endowed in the power department, it has more than enough volume for an average sized living room. We also watched Jack Ryan: Shadow Recruit and found that, once again, the V577 was able to effectively render that film's well designed 7.1 sound mix. The atmospheric effects were precisely rendered with all four surrounds, whilst the front soundstage and hefty low-end gave the fight scenes a visceral edge. Certainly anyone who enjoys a good multi-channel film soundtrack won't be disappointed by the V577's nimble acoustic gymnastics.

We were pleased to discover that this delicate touch also extended to the two-channel world as well, with the V577 handling the pianos and female vocals on Adele's One and Only with ease. However it was also able to handle more complex arrangements such as a full orchestra recording, whilst the Yamaha's ability to handle bass well meant that a bit of AC/DC was equally as enjoyable. Overall this was an excellent all-round performance from the V577, making it an ideal receiver for anyone thinking of adding additional channels to their viewing environment.
The V577 delivered an excellent audio performance with lively surrounds and well integrated bass.

Yamaha's RX-V577 7.2-channel AV receiver is a great entry-level receiver that offers a winning combination of features and performance. The design is minimalist but attractive and the front facia won't confuse anyone who is new to multi-channel home audio. There are plenty of connections at the rear and although we would have liked to see a couple more HDMI inputs included, at least they're future-proofed for video passthrough. The display is large, well designed and informative; whilst the provided remote control is suitably ergonomic in design but lacks a backlight. Setup is very simple thanks to Yamaha's YPAO sound optimisation software and the menu system, whilst simplistic, at least is easy to follow. The inclusion of built-in WiFi is a welcome addition and very straightforward to setup, which makes a nice change on an AV receiver.

The V577 has an excellent set of features and the inclusion of built-in WiFi makes accessing AirPlay and your network even easier, although there is also the option for a wired connection. The file support on the V577 is comprehensive, allowing you to take full advantage of any high definition music you might have. The free remote app is very impressive and thus provides a real alternative to the provided remote control, which is very handy in a darkened room. The audio performance was impressive, with the V577 delivering a well defined and highly active surround experience. The sound field was lively and thoroughly entertaining, with a nicely integrated bass and a wide front soundstage. The V577 also handled two-channel music well, making it an excellent all-round receiver and ideal for anyone thinking of taking their first steps into multi-channel audio. If you're in the market for a sub-£500 AV receiver, then the Yamaha RX-V577 is certainly worth a spot on your short list.