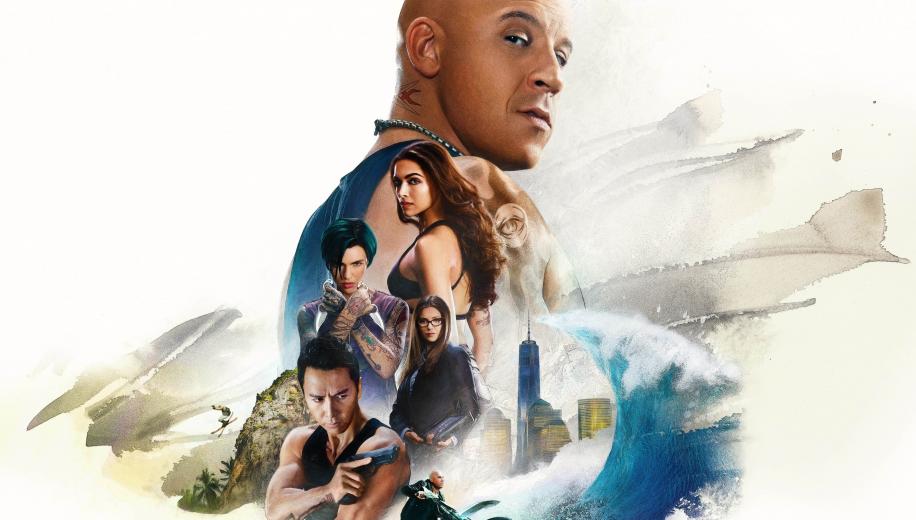 Fifteen years ago, Diesel broke into stardom off the back of three films: Pitch Black, The Fast and the Furious, and XXX. With films planned to Fast 10, Riddick failing to get the numbers required to bring the whole multiverse to life in a further sequel, and none of his other franchise attempts getting any traction, he returns to Xander Cage. So, whilst an odd choice, it's likely his only choice, and thankfully, it largely eschews pretentiousness for a carefree, stunt-driven OTT ride bustling with exotic locations, action setpieces and a super-toned cast. When a group of extreme stunts special operatives steal a device that allows you to turn satellites into missiles (don't ask), it falls upon the original, retired XXX, Xander Cage, to save the day, calling upon the help of a disparate group of on-the-fringe players (one of them appears to be nothing more than a DJ - I kid you not - whose task is to distract people with his banging beats).
Whilst this could have easily been just the Vin Diesel show, (credit to him that he's far more fun here than as his perpetually po-faced Fast and Furious character), he seems more than happy to share the limelight with a whole ensemble cast of enthusiastic players. There's certainly never a dull moment when the excellent Donnie Yen is on the screen (deserving of his own US franchise by now), and, although Tony Jaa is utterly wasted, Ruby Rose enjoys herself even more than she did in John Wick 2, Deepika Padukone sizzles, and bigger names like Sam Jackson and Toni Collette chew through their suit-wearing cameos (the additional surprises in the final act will also bring a smile to your face). And whilst it takes a while to get going (the first half is too light), a couple of twists change it up a gear and leave the second half basically wall-to-wall action. If you're not too demanding then it does deliver... just, and that's actually quite surprising for a XXX entry.

Overall it's an undeniably gorgeous looking film, mostly due to the lush, vibrant, exotic locales on offer, but, whilst there's no doubt that the picture quality is impressive - arguably even demo standard - there is some doubt as to the margin of difference between the 2160p Ultra HD Blu-ray image and the image on its 1080p Blu-ray cousin. Perhaps there is a slight uptick in resolution between the two discs, but it's frankly genuinely quite hard to see, likely not least because of the limitations afforded by the 2K DI.

Normally it would be in the HDR and WCG where the chasm appears, but even those are implemented more subtly than you would have expected - particularly for such a recent, action-driven release. So whilst you do notice better colour depth, finer shading and shadowing, better contrast, and improved detail in lower lighting, there's little that stands out and pops above the BD counterpart.

Overall, it's solid and probably arguably quite faithful implementation of the format's tools, and it's enough to leave the Ultra HD Blu-ray release the preferred format to view the disc in, but also not enough to leave those with just the BD missing out on a great deal.

Cas Harlow reviewed the audio using a standard 5.1-channel setup – The accompanying Dolby Atmos track enhances an already absolutely reference Dolby TrueHD 7.1 core which is packed with bracing effects coverage, energetic score dissemination and well-prioritised dialogue overlayed on top. There's nothing to fault here and it would be hard to see how the track could sound much better. It's an action-packed movie, much moreso than either of the other already action-packed XXX instalments, and there's a wealth of gunfights, car crashes and screen-filling explosions to shake up your living room, with bullets pinging around, and satellites crashing through your roof, all with a healthy, hearty LFE input. The score is suitably engaging, even if it's not particularly memorable, serving the proceedings and giving the soundscape yet more energy to be fuelled with. Overall it's a highly dynamic, boisterous and bombastic track that is demo worthy even before taking into account its immersive audio enhancements.

Steve Withers reviewed the audio using a 7.2.4-channel Dolby Atmos setup – In a film so over the top that the least ridiculous scene involves Vin Diesel skiing through a jungle, you wouldn't expect a subtle sound design and you don't get one. The Dolby Atmos soundtrack takes full advantage of its object-based mix to deliver a highly active and very immersive audio experience. The opening credits make full use of all the surrounds and the overheads, whilst the numerous action scenes steer effects all around the room. There's plenty of low frequencies as well and not just in the explosions, the soundtrack includes a lot of bass-heavy music to go along with all the extreme sports antics. There's plenty of helicopter flyovers to keep the overheads busy and a zero-g fight in a free-falling plane that fills the entire room with sound. It's a soundtrack with plenty of dynamic range and an enthusiastic but forgettable score that's spread across the frontal array. Dialogue remains clear and focused despite all the cacophonous music and action that dominates this excellent, if rather over the top, soundtrack.


A quartet of Featurettes are available on the accompanying Blu-ray

A quartet of 10-20 minute Featurettes dip into key aspects of the production: Third Time's The Charm: Xander Returns takes an overview into the project; Rebels, Tyrants & Ghosts: The Cast looks behind the players, old and new; Opening Pandora's Box: On Location looks at some of the exotic settings and I Live for This Sh#t!: Stunts looks at some of the crazier setpieces. The disc is rounded off by a Gag Reel.

Certainly the Ultra HD Blu-ray looks and sounds fantastic, although there's some question as to whether it poses much of an upgrade over the Blu-ray counterpart, which also boasts the same spectacular Dolby Atmos track. Nevertheless, it still looks fabulous, and the film, whilst quite throwaway, does have its fun moments, particularly in the over-the-top final act.