It's certainly cheap but is it cheerful? 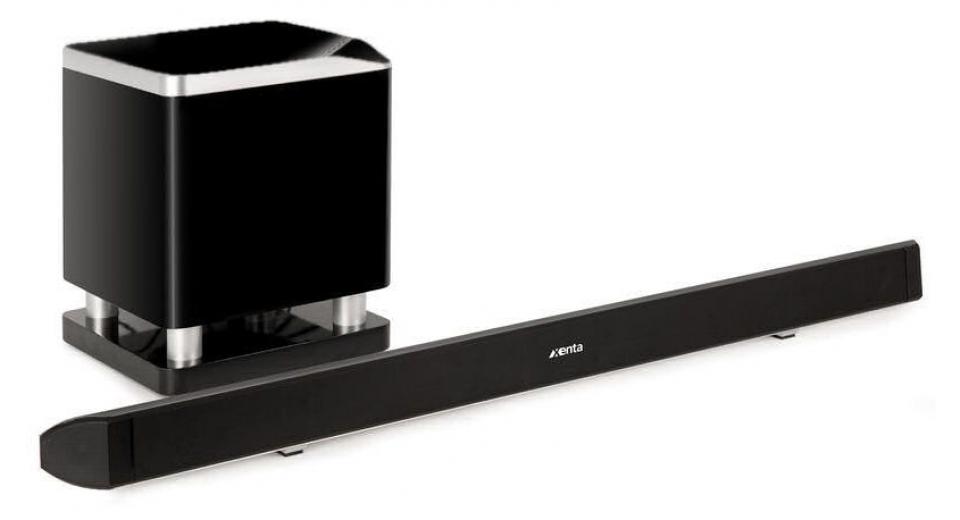 We’ll forgive anyone for saying ‘who?’ when it comes to the name of the manufacturer of this soundbar as we have to admit, until now, we’d never come across them before either. Xenta is one of Ebuyers in-house brands of products. They initially started as a brand for cables and interconnects spanning a wide range of products, but more recently they’ve invested more into R&D of AV products to improve the range. Their hope is to offer a high spec product at a competitive price. The Xenta XTS210B Soundbar is the first of this new product range and enters a highly competitive and ever-growing market place at a very attractive price-point. So let’s see if Xenta’s sub £150 offering can carve itself a piece of the pie. We weren’t necessarily expecting the Xenta XT201SB to feature the highest build specifications, given its lowly price-tag, so we were very impressed with the rigid, aluminium construction of the main speaker bar that, whilst lightweight, does feel built to last. The bar measures around 97cm across, at its widest point where the side firing drivers are covered by a grille that tapers backwards. At under 7cm in height, it should have no problems being placed underneath almost all TVs without obscuring line-of-sight for the TVs remote control; we’ve found that some soundbars are just too high to be accommodated on a TV stand without that annoying proviso. For those that do wish to wall-mount, the XT201SB does come with the necessary attachments. The fact that the XT201SB manages to be so low-slung is thanks in no short measure to the fact that all the incoming connections and amplification are handled via the subwoofer unit which, whilst more plastic in its construction, feels equally as well-crafted as the main speaker bar and is quite heavy indeed. It is also fairly compact and its 250D x 250W x 305H (mm) form shouldn’t take up too much of your floor space. To the rear of the subwoofer/amp are two coaxial digital inputs, one S/PDIF digital audio (1m cable included) and two RCA stereo jacks. Outgoing connections are made up of a non-detachable power cord and an interconnect between the subwoofer and the speaker bar which, thoughtfully, Xentia has made via ribbon wire that greatly helps in its neat concealment. We had it tucked down the side of the Panasonic TX-L55ET60B’s base stand, where it was only visible at the terminal, and then only from close up and overhead. If you’re in the market for a soundbar, you clearly value tidiness, so it’s a good move. At under £150 we really weren’t expecting HDMI connectivity and we didn’t get any so if you’re after the convenience of ARC (Audio Return Channel) and HDMI CEC (Consumer Electronics Control), you’ll need to look elsewhere, although the latter of the two often proves anything but convenient.

Additional to the connections, there are also some simple operational buttons for power, volume and source selection as well as a main power switch to the rear. On the cut-off top right hand corner of the subwoofer/amplification unit is a simple red LED display that gives feedback on source selection as well as sound mode, volume, bass and treble adjustment levels. It’s nothing fancy and the same could be said of the pocket-sized remote control that comes in the box. In fact, the remote is probably the only real, outward giveaway that the Xenta XT201SB is a budget offering but we’ve seen some equally unappealing efforts in soundbar packages costing double so we’ll forgive the cost cutting here. Those that own universal remotes will probably want to add the XT201’s set of commands as a matter of priority: for those that don’t, you’ll just have to put up with it and the fact there’s only 14 buttons, in total, should mean you’re quickly used to the layout and able to operate it in low light conditions, after a relatively brief initiation period. The inclusion of Bluetooth technology, at this price point, is an excellent addition to the feature set and opens it up for useless as wireless speaker purely for music listening. During working hours (and there’s lots of those) we had it placed, facing us, at the end of our desk whilst we tapping away at our keyboard and then it was a simple, 60 second job to put it back in front of the TV later on to enhance the viewing experience. It certainly gives a far wider soundstage and better sense of stereo than your typical wireless speaker and that’s without recourse to the use of the licensed SRS TruSurround HD technology included within.

As a little history lesson, Sound Retrieval System (SRS) Labs once came under the jurisdiction of Howard Hughes’ business empire and their technology had been fairly commonplace in TVs from the likes of Sony, Samsung, LG, Panasonic and Toshiba, to name a few. More recently, SRS became a part of the DTS family who claim the TruSurround HD technology accepts up to 6.1 input channels and renders virtual surround sound from 2.0 – 3.1 speaker configurations. DTS says the processing both improves dialogue clarity and maximises bass response as well as providing high‐frequency clarity enhancement and bass management for subwoofer and centre speaker designs. The proof of the pudding is in the eating, of course, so we’ll tackle those lofty claims further down the page.

As we’ve said above, we gave the Xenta XT201SB plenty of chance to prove its worth on a number of fronts as an almost constant companion – for TV/Movie and Music – through all its available connections and it proved deserving of comparison to competing products such as the Orbitsound M12 and Samsung HW-E450 which cost quite a bit more. OK, so the Samsung does have a useful HDMI connection but sonically the XT201 was about their equal.

Xenta’s intended destination of the XT201B is undoubtedly for it to be plonked under your TV and they, incidentally, recommend it for TVs in the 37 to 42-inch category but it was more than capable of providing a soundstage wide enough to match a display of 55 inch and above so they’re underplaying its abilities somewhat. The XT201B offers three DSP Modes – TV, Music and Movie - labelled E1, E2 and E3, respectively, on the LED display and whilst there’s a natural element of personal preference in your decision, we’d avoid the somewhat throttled TV mode. In fact we plumped for the Music selection for all content and tweaked it a little on the bass and treble to suit the source and the results were surprisingly proficient and precise. For better or worse (there’s something very compelling about it), we’re currently working our way through the HDTV series of Spartacus and the XT201 proved suitably equipped to cope with all the visceral action. Spartacus: Blood and Sand is laden with an extremely bass heavy soundtrack with lots of weapon (and fist) impact sounds that would give any sub a run for its money yet the XT201SB didn’t really falter. We will say that on harder flooring the unit did wobble and shake a bit, so those with wooden floors might want to consider placing some additional dampening beneath but on a carpeted floor it really did punch considerably harder and with more accuracy than its 5 and a quarter inch driver specification would suggest – a bit like the gladiator in question.

Thanks to the side-firing 1-inch drivers, the XT201 also manages to produce an encompassing sound field with a nice sense of surround and you don’t necessarily need the assistance of the SRS Tru Surround HD technology to achieve it. There’s little doubt hitting the SRS button on the remote will open up things considerably but it is at the cost of some mid-range punch that you can never really retrieve with the available controls. There is some joy to be had with 5.1/6.1 soundtracks but you’ll need to remember to set your source to output PCM as the XT201 features no DTS or Dolby multi-channel decoders; and it’s a waste of energy for stereo sources. The assailing soundtrack of Dredd provides a good workout and with some minor adjustment of the controls (you need a lot more volume), together with the SRS processing it provided an impressive impact, with clear dialogue and plenty of bass pump to satisfy. You can’t push it too hard with incoming multi-channel audio but one can certainly reach neighbour-bothering levels if required.

It’s probably the musicality of the Xenta that most took us off guard and it demonstrated itself across a number of genres extremely creditably. We do have to remind ourselves what this product costs and we do have to accept the limitations of a soundbar configuration but our catholic music tastes were more than sated for some casual listening and you can actually push the XT201SB fairly hard without it buckling under the pressure so its capable of performing at social gatherings too. Our love of some old-school hip hop to get the blood pumping found the Xenta in snappy form but it was also capable of handling a touch more nuance and silky vocals from Ella and picking out the more complex melodies in something like Elbow’s Ribcage. There were times when the Xenta was overwhelmed, Sigur Rós’ haunting Ekki múkk (Google it, if you have yet to hear) pushed it to high frequencies it couldn’t deliver whilst, at the other end of the scale, deadmau5’s Strobe took it lower than it really wanted it to go but it gave it more of a go than some docks and wireless speakers we’ve heard that occupy a similar price point. The idea we’re trying to get across here is - if you hadn’t picked up on it - that the XT201SB provided a very nice solution for those that like to stream music by Bluetooth from smartphone, tablet or computer.

Xenta has proved that producing a very competent soundbar for an extremely reasonable fee is an eminently attainable feat. The XT201SB looks and feels as well engineered as competing products costing nearly twice the price and it’s only the lack of HDMI connectivity that hampers it, somewhat, from going toe to toe with some of the bigger boys on the block. Other than the lack of a digital video connection, the XT201 is well appointed with three digital audio inputs and a couple of stereo jacks. The remote is a bit low rent but we’re glad they spent the money on including Bluetooth and, to a lesser extent, SRS Tru Sound processing instead.

As you would hope, the XT201SB is a breeze to set up and the use of ribbon wire to connect up the speaker bar with the amplification means it’s easy to achieve a nice tidy setup. The Xenta is quite portable too and we had it fulfilling a role as wireless speaker, using Bluetooth, for music, during the day, and then relocated it to the living room at night for TV and Movie purposes. That the XT201SB is equally at home with music as it is soundtracks certainly helped and provided it’s not pushed too hard with multichannel audio or stretched by an excess of low and high frequencies, is capable of a performance at least on a par with more costly competing products. The XT201SB’s naturally wide (for a soundbar) soundstage is extended by the side-firing drivers and with some careful configuration, the SRS technology is able to convey a good sense of surround.

The Xenta XT201SB packs a lot more versatility than it really has the right to. It’s equally as sure-handed with music as it is movies. Provided you know, and work within, its limitations – which aren’t too restrictive – it will give you more pleasure than one might reasonably expect at 150 quid and is, therefore, a very worthy recipient of an AVForums Recommend Award.