Welcome to your stage, commander 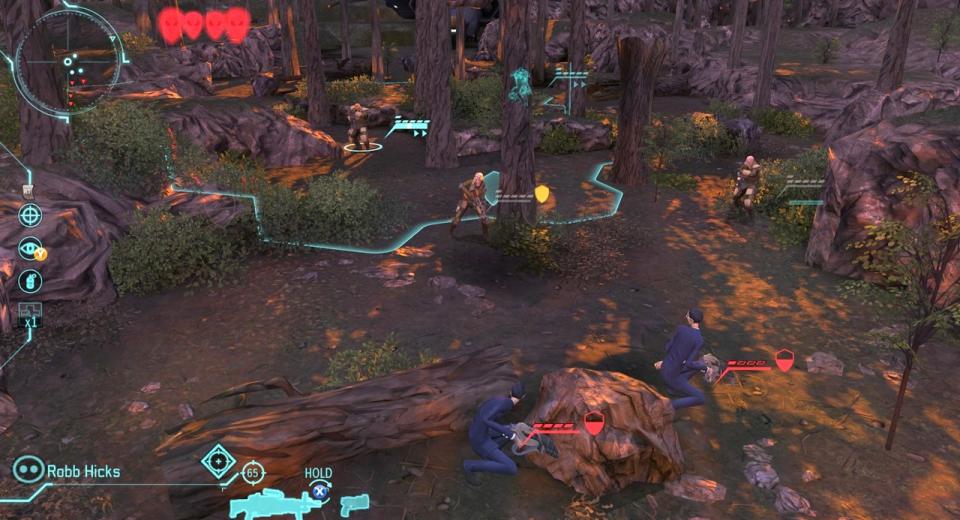 At the heart of any good strategy title is that inescapable drive to unravel and balance the formula that underpins its mechanics. It’s the tinkering with element Y at the expense of mechanic X to produce mystery result Z many hours down the line, and the best examples have deep hooks and malleable variables to produce a wide range of outcomes that clearly convey exactly where you went wrong and what worked. That was the beauty of the original Xcom way back in the golden age of PC gaming, and the same holds true for this Firaxis-developed reboot. We'll have to wait and see how much of that hook remains when the upcoming FPS version of the franchise is given its final push to release, but for now, fans need look no further than Enemy Unknown. This is the one you've been waiting for.

Indeed if you are one of those long-suffering strategy stewards, it's worth noting that 2K’s fresh look at Xcom stays remarkably true to its complex roots, allowing players to toy with multiple different gameplay tracks as they face up to the world-conquering threat of an alien invasion. It's also a game that seamlessly blends modern presentation and difficulty traditions into the mix however, creating a layer of accessibility that simply didn’t exist the first time around. If you’ve ever been tempted by a turn-based strategy game but put off by layer upon layer of dry mechanics, this is the one with which to dip your toe.
The premise is the same as it always has been. You play the role of commander for an organisation known as Xcom, a sort of United Nations last-stand defence force against an alien invasion that’s seeing earth slowly obliterated with violent attacks from ships and creatures alike. It’s your job to scan the skies, intercept UFO craft as they make their way to ground level, research alien technology to beef up your own soldiers, take on missions to keep panic levels down in the various countries that fund Xcom operations, launch satellites above their territory to scan for more threats, balance your books with a micro-economy of research and production, build your base to its best efficiency and finally move the overarching narrative forward with story missions and set pieces. If that sounds complex, it’s because it is, but Xcom: Enemy Unknown introduces almost all of those concepts to you in small chunks of tutorial gameplay that can be deactivated whenever you like. As such, new players will find use in running through the first 4-5 hours, then starting a new game and switching the stabilisers off. Most of the fun in Enemy Unknown is to be found in forging your own style and path through the many systems on offer, and it’s a title that rewards - and almost demands - replaying, experimenting and tinkering in different areas.
No matter what path you choose however, there’s a roughly 50/50 split between playing through ground missions and tinkering with strategic options in your base, and both are equally absorbing with a few common threads carrying through them. The most prominent of those are your soldiers; the fully customisable and upgradable snipers, support, assault and heavy units that form the backbone of your ground war. With every mission they evolve and become better and more useful at what they do, but at the same time remain completely at risk of obliteration within a few badly-thought-out turns. Xcom is fiercely punishing at times, and you quickly learn that your soldiers have to be efficient but ultimately expendable, and there has to be a swathe of new recruits coming into your ranks and levelling up at every opportunity.
What that allows for however, is a lot of experimentation. Each of your unit types has multiple perks that trade off against each other as you climb the experience tree, and many of these are decisions you might want to make differently the next time round. My current maxed-out sniper, as an example, has the ability to “double-tap” and fire twice at any given enemy in a single turn, but that came at the expense of selecting “in the zone” which would have let him chain together shots as long as they outright killed each enemy they hit. Why not have two snipers with different configurations then? Why not indeed, although with a maximum squad size of six, there are myriad different combinations to explore when considering the full suite of classes.
On the turn-based battlefield, that translates to an experience that’s varied, captivating and supremely challenging, with a huge variety of tactics to be employed. As an example, my current preference is to take four maxed-out Colonel-level squad members every time (one sniper, one assault, one heavy and one support), and then mix and match a few rookies to either boost their experience or provide a quick damage-sponge to soak up any danger to my higher-value operatives. I utilise snipers primarily in ‘overwatch’ mode (if any enemy wanders into their line of site they’ll take a snap shot) as high up in the terrain as possible (with the benefits of “squad sight”, which allows them to fire on any enemy within line of sight of anybody in my party), and shift everybody else forward inch by inch to flush out enemies as efficiently as possible. The support hangs back and runs forward with the med kit as necessary, or alternatively darts out into the world as a quick recon. That’s just one approach however, and for a long time in my campaign it was completely different, with heavies, grenades, rockets and armour getting me through the majority of the first act. Using cover and flanking to your advantage is absolutely key no matter what approach you choose however, whilst utilising the “dash” skill to dispose of both action points for a squad member in return for a sprint over an extended distance comes with its own quickly-learned set of dangers. Line of sight also needs to be paid attention to, but it has to be said, that mechanic is slightly sporadic in its effectiveness. You can quite happily fire through a car, for example, but you might only get a 20% chance of hitting an enemy set against a wall maybe 10 feet from your position.
The best thing about Xcom’s deep combat however, is that your enemies will utilise their own skills, perks and upgrades right back against you. It’s a horrifying sight to see three Mutons (huge hulking heavy beasts) launch a grenade from cover as you realise you have several party members clustered within the blast radius (lesson learned), or indeed to have one of your soldiers rushed by a Chrysalid (alien-style scuttling xenomorphs with a penchant for up-close and personal tendril stabbing) and turned into a zombie that also needs to be put down.
By the time you’re into the late game, armour has been upgraded on even the basic grunts, psyonic powers mean that your own soldiers can be turned against you or sapped of their will (you can also discover, research and utilise those powers on a separate skill tree for your own soldiers with the “gift”, if you choose), and unless you keep your squad topped up and safely contained, there’s always the chance they’ll just freak out and run, hunker down or begin blindly firing at anything and everything - including their own troops. There go the best laid of plans.
And that’s hardly scratching the surface. There are so many facets to Xcom’s combat that it’s just not feasible to discuss them all here, but even after 30+ hours of playing, I’m still discovering more. With every victory comes a cash reward, or a number of scientists or engineers to add to your pile, along with various scavenged corpses, bits of technology or weaponry with which to fund new technology research or simply sell on the black market. That’s the second part of Xcom, and it’s almost equally as dense as the combat. There’s a limited amount of space in which to build your base so efficient planning needs to be paramount (placing some building types next to each other confers bonuses on their performance), and there are myriad different tracks to explore with your extremely limited funding. You can launch satellites to enable better funding and resource bonuses from Xcom countries that are covered, but that comes at a huge price and a hefty time to build and implement. Would that money have been better spent elsewhere on new equipment for your troops? New buildings? Updated research? Improved equipment? Robotic combat drones? Upgrades for your interceptor fleet? New aircraft? More troops?
Developer Firaxis demands that you consider all of those options, and due to the dearth of resources at your disposal, more often than not you’ll find yourself short in one or more areas. The way you handle each of those problems will shape the challenges that come your way, whether it’s the frequency of ground-based missions to boost your resources, or the relative difficulty that comes along with sub-standard equipment and low-experience soldiers when delving into those battles. It’s a game that ultimately tailors itself to your decisions, and it’s impossible not to wonder what it’d be like had you chosen a different path.
And that’s the primary draw. There are so many moving parts to Xcom: Enemy Unknown that it’ll be impossible to see everything without playing for hundreds of hours. Even if you only played it once however, your campaign would likely be completely different to that of anybody else; not in the way the storyline turns out (although there is variance there also), but in terms of the gameplay experience.

Xcom: Enemy Unknown is a wonderfully enticing and complex suite of mechanics that work together to form a fantastically cohesive whole. Multiple tactical goals are always within reach, and every mission comes along with that “just one more” feeling. A new piece of equipment or a technological breakthrough is always within sight. The balance is nigh-on perfect.
Surprisingly, it’s perfectly playable on a gamepad too, and indeed that’s the preferred method of control even on the PC. Whilst the visuals in its semi-randomly generated battlefields are a little muddy on the consoles, they quickly come alive with destructible scenery and a wide variety of locales when hooked up to your beige box. The neon-tinged 50’s sci-fi stylings of the enemies and their accompanying fleet lend just enough comic-book lightness to what would otherwise be an extremely despairing and violent experience, and the buttery-smooth framerates, low system specifications and improved resolution on the PC version make it absolutely the one to go for - if you can.
Whatever you end up playing on however, Xcom is an absolute treat. Many people feared about this reboot, and it’s a delight to discover they didn’t need to at all. There are a huge number of mechanical callbacks to the original game and nods to old-school content that’ll keep hardcore fans happy, whilst everybody else gets to jump in and envelop themselves in one of the finest turn-based strategy games of this generation. It’s compelling, it’s huge, it’s utterly addictive, and it’s one of the best games of this year.