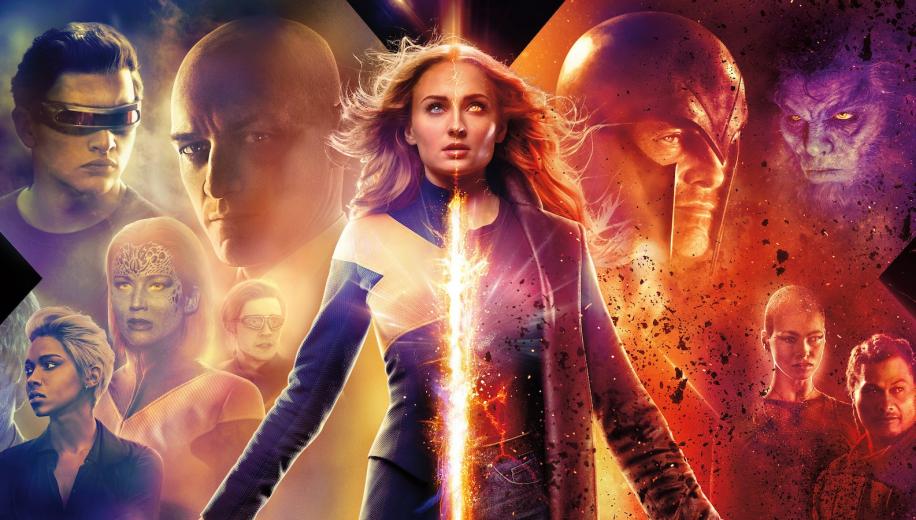 The last Fox X-Men movie may well involve a trainwreck, but thankfully it isn't one, at least not completely, although it does still undercook one of the best ever comic book storylines.

So we had the original trilogy, which saw a solid start and a superior sequel give way to an appalling third entry, X-Men: The Last Stand, utterly wasting the Dark Phoenix plot even if it had brief moments of excellence (Scott vaporising a Lake; Wolverine vs. Phoenix), and killing the franchise dead... But then it got rebooted - sort-of - with a solid prequel series that initially re-focussed on the origins of Professor X and Magneto, going strong with characterisation before coming up with the genius idea of changing the timeline, fixing the wrongs of The Last Stand in the superb sequel Days of Future Past. They could have just ended it there, but why quit when you're ahead when you can instead milk a franchise dry?

Apocalypse, for many, was a thoroughly disappointing follow-up to Days of Future Past, introducing an underdeveloped young cast into a situation involving an overpowered opponent who should have been a defining X-Men antagonist, rather than an excuse for bad effects and meaningless overkill setpieces. So now, half a dozen films later (not counting the Wolverine-themed spin-offs), it's finally the end of the road, as the Fox buy-out affords us the very last Fox/X-Men movie (pushed back a year after its intended release date - it was actually shot at the same time as Deadpool 2), carrying the burden of not only reshoots but an entirely reworked third act (rumoured to be because of the similarities to Captain Marvel's finale). Despite all of that, it's not that bad.


Dark Phoenix hardly goes out on a high, but it offers a solid enough bookend to this extended franchise

Although it appears to have been largely written off, those watching it might struggle to find anything awry in the entire first act, which sets the sombre tone - and maintains it - and builds a sense of impending doom all the way through to a second act shock delivered with just the right amount of gravitas. From there on out, the film - bolstered by a refreshingly straightforward (unlike Godzilla: King of the Monsters), but also, unavoidably, predictable story - struggles to find much to do with itself as it rumbles towards a suitably engaging finale. Sure, this isn't Marvel Avengers movie scale, but the smaller confrontation works, mounting jeopardy despite intangible antagonists, and seeing unlikely but welcome team-ups helping emphasise the threat and peril. Dark Phoenix hardly goes out on a high, but it offers a solid enough bookend to this extended franchise.

The biggest problems come from an undercooked story, underdeveloped characters, and intangible antagonists (Jessica Chastain never quite makes for a palpable threat). The younger cast fare the worst, with Game of Thrones' Sophie Turner doing her absolute best despite simply not having the experience or character backdrop to support what befalls her character. Rushed from teen introductions to big leagues due to Studio politics more than by design (the opposite of the MCU, and closer to Justice League in terms of jumping the gun), the 'new' younger cast pale into insignificance in comparison with the older crew members, with McAvoy and Fassbender still providing the strongest offerings, afforded a respectful arc to the characters they've invested in over the last four films. Jennifer Lawrence, who feels like she's been tortured into returning here, gets the worst treatment, which is tragically ironic: what this prequel series did for Mystique, they needed to do for Jean Grey, but they simply didn't take/have the time.


X-Men: Dark Phoenix lands on UK 4K Ultra HD Blu-ray courtesy of Fox, marrying up to the preceding US release and defying the ostensible limitations of its Digital Intermediate to yield a suitably spectacular 4K presentation.

Even if this feels a little smaller in scale than you might expect from the end of this blockbuster franchise (and given its proximity to Endgame), Dark Phoenix still looks the part, enjoying a modest but discernible uptick in detail which yields welcome results on close-ups, texturing mutant skin and hair, picking up on the finest flourishes, and delivering clarity throughout.

As per, it's the HDR and WCG implementation that push the release over the top of its SDR Blu-ray counterpart, with colours more striking, and lush, vibrant tones for everything from hair to skin (yes, I'm looking at you Mystique), as well as some wonderfully fiery-but-electric streaks of red-orange energy defining the Phoenix powers themselves. Black levels are strong, giving the image a decent backbone and impressive with the strong shadow detail on offer during the darker sequences, rounding out a superb video presentation.

Dialogue remains firmly prioritised throughout, clearly resolved irrespective of the action going off in the background, whilst the score by Hans Zimmer is a wonderful coup, and feels a cut above the movie itself, getting excellent dissemination across the array and pulling you into the emotional journey even when the film itself often comes across as lacking on that front. It's thrilling, rousing and quite powerful at times, almost pulling off a signature theme evident at the end of the prologue which would have been welcome if it had featured throughout.

Effects are, of course, where the track really shines, with finer flourishes keenly observed by the array, but the real demo territory coming courtesy of the main action setpieces. Space disasters explode to life, military assaults threaten to blow your roof off, and train battles careen right through your living room, replete with excellent dynamics, directional precision and LFE weight that is utterly pervasive.

Once again, very little is ported over to the Ultra HD 4K disc proper, but at least the Audio Commentary makes it there so, if you want to listen to that, you get to watch the film in 4K. Aside from that, all of the remaining extras are on the accompanying Blu-ray disc.


The extras package is reasonably decent

The extras package itself is reasonably decent, with that Audio Commentary from the Director bolstered by a multi-part, feature-length Documentary which runs at 80 minutes in length and dips into much of the production process, complete with plenty of overly enthusiastic cast and crew comments along the way. There's another short Featurette with Nicolas Hoult's Beast goofing around, a few minutes of Deleted Scenes, and a Trailer to round out the package.

There is a lot more to enjoy in Dark Phoenix than, at first glance, might be expected. Zimmer delivers a surprisingly powerful score that is deserving of a better movie than this, but draws some emotion even when the story and characterisation cannot; the first and last acts are decent enough, and the tone is pleasantly ominous, with McAvoy and Fassbender worth the watch alone. What is going to frustrate the most is likely that this is yet another waste of the defining Dark Phoenix saga, but it's hardly The Last Stand, and it's better than ending on Apocalypse, going out with more of a whimper than a bang, but at least a respectful whimper.


What this prequel series did for Mystique, they needed to do for Jean Grey, but they simply didn't take/have the time

X-Men: Dark Phoenix's UK 4K Ultra HD Blu-ray disc affords us not only excellent 4K video but also reference Atmos audio, with the release rounded out by a solid selection of extras, albeit relegated to the accompanying Blu-ray. On-the-fence fans might have been hoping for a 'Rogue Cut', but this is nevertheless a strong release that's worth checking out.