A cracking Ultra HD Blu-ray can't save this turgid mess 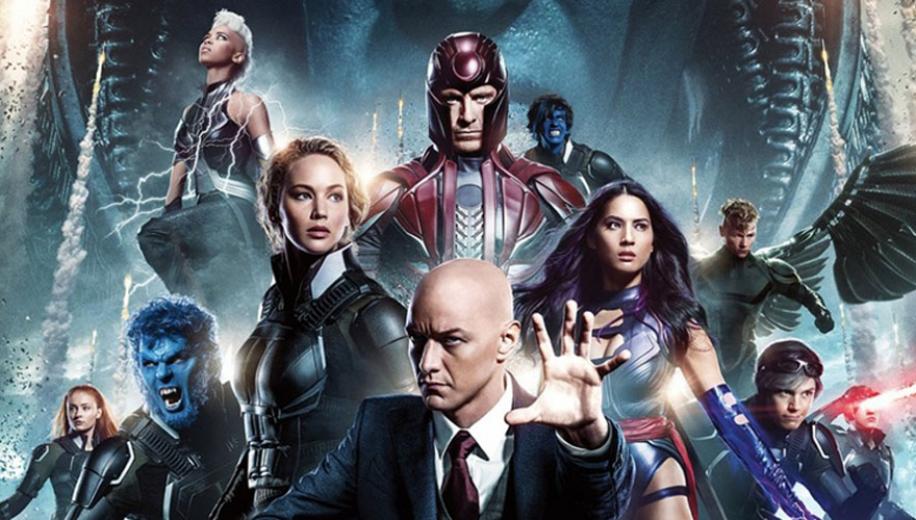 "At least we can all agree that the third one is always the worst."

The line above is said by one of the characters as they leave a screening of Return of the Jedi but this hubristic dig at X-Men: Last Stand backfires massively. Sadly despite Matthew Vaughan rebooting the franchise in style with X-Men: First Class and original director Bryan Singer returning successfully to the fold with X-Men: Days of Future Past, this third chapter in the new trilogy is a bitter disappointment. It was always going to be hard topping Days of Future Past and after The Wolverine turned out to be quite good and Deadpool became the most successful X-Men film ever, the stakes were even higher. Sadly Bryan Singer and Simon Kinberg drop the ball in spectacular style with a film that fails on almost every level. Despite a great cast, who are largely wasted, the blame really lies with the screenplay which suffers from over familiarity, a poorly defined villain, lazy plotting and a weak ending.
That wouldn't so bad if the rest of the film had raised its game but the costumes are awful, the effects not so special and the direction pedestrian. The majority of the cast try hard but you can't ignore the fact that this film is supposed to take place 20 years after First Class but no one seems to have aged a day. As for Jennifer Lawrence, she is clearly phoning it in as she fulfils her three-film contract and even great actors like James McAvoy and Michael Fassbender can't save this mess. As for poor old Oscar Isaac, he struggles under a ton of dreadful make-up that would look cheap in an episode of Doctor Who. There were such high hopes for Apocalypse, which makes the ultimate failure of the film harder to bear and does raise the question of where the franchise can go next. Let's hope that the Deadpool sequel fulfils that film's early promise and that Hugh Jackman gets the send off he deserves in Logan. X-Men: Apocalypse was filmed digitally and in 3D using a dual-rig Red Epic Dragon camera setup at a resolution of 6K and was finished using a 2K Digital Intermediate (DI) for the 3D presentation and a 4K DI for the 2D presentation, which presumably formed the basis for this Ultra HD Blu-ray release. The film is presented at a resolution of 3840 x 2160p and in its correct 2.40:1 aspect ratio, the disc uses 10-bit video depth, a Wider Colour Gamut (WCG) and High Dynamic Range (HDR), and is encoded using the HEVC (H.265) codec. We reviewed X-Men: Apocalypse on an LG 55B6 Ultra HD 4K TV with a Samsung UBD-K8500 Ultra HD Blu-ray player. Although this review is of the US release, the UK disc should be identical.

The film might not be great but the image on the Ultra HD Blu-ray is absolutely stunning and clearly superior to the included Full HD Blu-ray. In direct comparisons the level of detail is greater on the Ultra HD Blu-ray, which would confirm that the disc does indeed use the 4K DI as its source. There is a marvellous amount of resolution on display in every frame, from the detailed sets and effects shots to the clothing and make-up on the various mutants. The downside is that this level of detail does result in some of the effects appearing a bit flat and the awful make-up for Apocalypse looks even worse but that's the production's fault, not the disc.


Unlike the film, there's nothing mediocre about the picture on this Ultra HD Blu-ray

The use of HDR is also superb on this Ultra HD Blu-ray and the grade takes full advantage of the increased dynamic range to make give cityscapes and landscapes more definition and greater realism. Any bright objects like the sun, lightning or explosions clearly benefit from the increased specular highlights, as do reflections and bright cloudy skies but blacks are also deep and with plenty of shadow detail. In direct comparisons with the Full HD Blu-ray, there is simply greater detail apparent and this is due to more than just the increased resolution. When comparing the two discs side-by-side the benefits of HDR are clear to see and make you realise why the studios are so keen on the idea of a wider dynamic range.

If there is one area that really benefits from the move to Ultra HD its the colours, thanks to the use of a wider colour gamut. This is a comic book movie and colours are important, with numerous key characters sporting skin that is various shades of blue. The colours on the Ultra HD Blu-ray not only pop but also retain plenty of subtle shading and this is especially true of Apocalypse who often looks completely different depending on the lighting he's in (something that Bryan Singer actually mentions in the extras). During the climatic showdown the flames, explosions and other effects all benefit from the increased colour gamut, resulting in a feast for the eyes. Along with the 4K resolution, WCG and HDR, the transfer uses a pristine digital source that is free of any banding or other artefacts, resulting in a reference level of picture quality. 
The Dolby Atmos soundtrack is fantastic, with immersive effects and thunderous bass

Just like the image quality on this Ultra HD Blu-ray, the Dolby Atmos soundtrack is an absolute barnstormer. An early scene involving a collapsing pyramid gives the sound designers a chance to mix in plenty of immersive perfects and a room (or should that be pyramid) shaking amount of bass. The arrival of Apocalypse himself is heralded by an earthquake that is felt by various characters around the world and once again the entire sound field is energised, with effective use of the subwoofer and the overhead speakers.

This is a very active and exciting object-based mix, that makes full use of the surround and overhead channels. The effects are expertly steered around the room and there is plenty of directionality to the audio. The low frequency effects are simply thunderous, providing a solid foundation to all the destruction in the final act of the film. However dialogue always remains clear and centred on the screen throughout, whilst the score is mixed into the overall soundtrack effectively, using the front array and even the side speakers where appropriate. This is easily one of the best immersive audio soundtracks that we have heard this year and it is a superb accompaniment to the stellar visauls.

Extended and Deleted Scenes (HD, 28:11) – There is an optional introduction for each each deleted scene from director Bryan Singer, who explains why the scene was cut or shortened, usually for pacing. What is obvious is that he should have dropped some of the boring scenes of city destruction in favour of the original mall scene which provides much needed character for the younger mutants. The Extended and Deleted Scenes are: Hey Big Brother, Welcome Scott + Jean Archery w/Powers, Magneto Return + Apoc Alley, Be Good, Brother, Nice to Meet You (Jubilee and Birds), Raven Tour + Jubilee Tour (Extended), Original Mall ("Safety Dance"), Old Houses + You'll Find It a Little Different, Jet Memories, "You Don't Know Me" , "It's Over" and Cyclops Reborn + "I Don't Need Luck" + Moira Arrests Stryker.

Gag Reel (HD, 08:20) – The usual mistakes and mucking about on set, most of which seems to involve Jennifer Lawrence, who is clearly delighted to be leaving all this nonsense behind her.

Wrap Party Video (HD, 04:46) – An amusing video in much the same vein as the Gag Reel, that was put together for the film's wrap party.

X-Men: Apocalypse Unearthed (HD, 1:03:58) – This fairly comprehensive documentary covers the film's entire production with interviews with all the key players, except Jennifer Lawrence who is conspicuous by her absence. The documentary is composed of seven sections and there is a 'play all' option or you can watch each section individually. En Sabah Nur: Setting the Stage for Apocalypse (10:56), Clan of Akkaba: Apocalypse and his Horsemen (14:06), Answering the Call: Assembling the New X-Men Team (09:06), The End of Times: Creating a New Age of Apocalypse (06:20), Unlimited Powers: VFX, Stunts and Setpieces (19:56) and What's Next (03:34).

Audio Commentary – This engaging and interesting commentary by writer/director/producer Bryan Singer and writer/producer Simon Kinberg does provide a great deal of background information on the production, even if they both appear oblivious to the mess that's actually on screen. X-Men: Apocalypse was one of the most anticipated films of the year, which makes its failure all the more disappointing. We can't even blame the studio for this mess because all the key players were also involved in the superior Days of Future Past, which means this is the film they actually set out to make. Sadly the screenplay is lazy and tired, although quite as tired as Jennifer Lawrence who is clearly just fulfilling her contractual obligations. Aside from Lawrence, a good cast is largely wasted or, in the case of Oscar Isaac's Apocalypse, lost under layers of terrible make-up. Let's hope that Deadpool 2 and Logan are better than this because the creative team behind X-Men: Apocalypse have clearly run out of ideas.


The Ultra HD Blu-ray release of X-Men: Apocalypse is superb but ultimately it can't save the film

The failure of the film itself is all the more disappointing because the Ultra HD Blu-ray is so good. The picture quality is simply state-of-the-art, with an image that takes full advantage of everything that Ultra HD Blu-ray has to offer including 4K resolution, WCG, HDR and 10-bit video. The resulting picture is superb with exceptional detail, saturated colours and an incredibly wide dynamic range. The transfer is pristine and free of any artefacts, resulting in a reference image.

The Dolby Atmos soundtrack is the equal of the picture, with a marvellous sound design that makes full use of the possibilities of immersive audio and is also a reference experience. The included region-free Full HD Blu-ray has an excellent selection of extras that give a fascinating insight into how the film was made, even they don't quite explain what went wrong. However if you're looking for a demo disc then X-Men: Apocalypse should fit the bill nicely but despite the reference picture and sound, it's hard to recommend the Ultra HD Blu-ray because at some point you'll actually have to watch the film!