It's all about the attitude 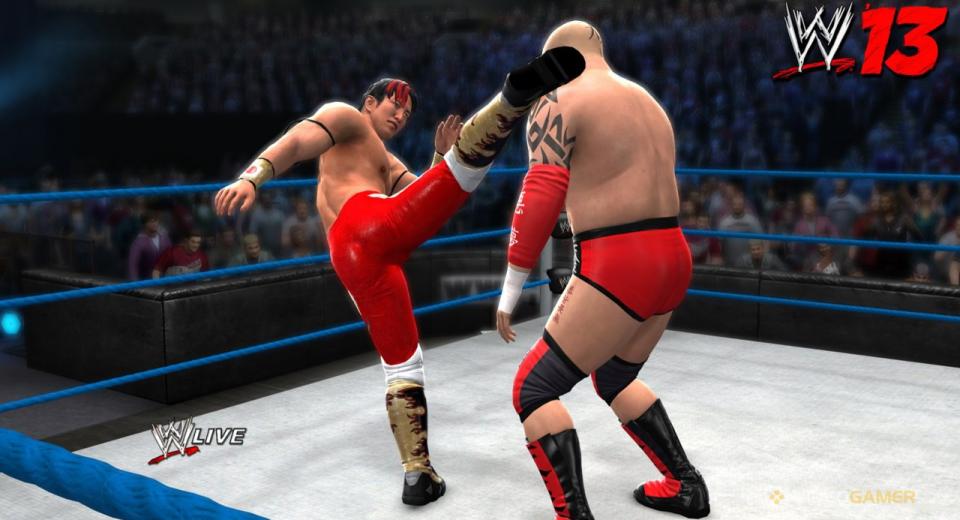 In the name of research, I watched wrestling for the first time in a decade. It's strange to think it's been so long; back in the WWF days I used to watch it all the time. As a youngster I was a huge fan of Mr Perfect and (inexplicably) Big Boss Man. In my late teens when the Attitude Era was in its prime, I lived in a house of dedicated wrestling fans and whiled away many, many hours in the company of The Rock and Stone Cold on television, and playing Wrestlemania 2000 on the N64.

Reacquainting myself with the wacky world of pro wrestling has been an interesting experience. My first time watching in all those years was eerily similar to my first time playing WWE '13: I was unconvinced about what Vince McMahon’s multi-million dollar machine could offer me.

But WWE has a way of sucking you in. Yuke's franchise is in the enviable position of having no direct competitors. While the emergence of UFC in recent years might catch the eye of some, WWE games don’t sell to fans of combat sports, they sell to fans of WWE.

The use of the license critical to how each iteration of WWE games is viewed. This time round, in an effort to appeal to precisely people like me, the traditional Road to Wrestlemania campaign is replaced by the new Attitude Era mode.

Attitude Era takes the player through six broad story arcs from the Rise of D-Generation X through to Wrestlemania XV. The campaign recreates more than 60 of the most memorable match-ups between 1997 and 2000, as WWE’s Monday Night Raw went head to head in a fiercely fought ratings war with WCW's Monday Nitro.
The aim of most match-ups is usually a straightforward win by pinfall or submission, but optional historic objectives are also available. Achieve them all and you'll be rewarded with a full re-enactment of the original events.

Unfortunately some of the optional objectives are disappointingly buggy. In three separate matches I was left waiting for an 'Attitude Moment' that didn't want to happen. I had my opponent well beaten each time but had to carry on fighting until eventually the Attitude Moment quick time event triggered.

Then there's the maddening section in which you're required to beat Paul Bearer in less than a minute and there is absolutely no way in advance to know how to do it. That whole challenge is flaky as hell, so PROTIP: for the best chance, throw him out of the ring.

Those are far from the only glitches. In fact, there are so many I've given them names. There's the one where you get pinned but the referee doesn't count (I call this Infinite Lives). Or the one where you get stuck in the audience (Crowd Control). Or the uneven invisible walls all around the gangway/backstage area (I've got an extra special name for this: Sloppy Game Design). And yet I ploughed through the Attitude Era mode in just a handful of sessions and I genuinely enjoyed it. There's no question the mechanics are frequently shambolic but for fans of that period in WWE's history there something special about reliving the time and, in some sense, the wrestling games that were around at the turn of the century.

So what about multiplayer? In keeping with the nostalgic spirit I gathered together three of my old Wrestlesmania 2000 buddies and we put local co-op through its paces.

As you'd expect, outside of the campaign Attitude Era characters are joined by their modern counterparts. A total of more than 100 superstars and divas will be available once all the DLC trickles through, making WWE '13's roster the largest ever.

There are a wealth of game modes to choose from: Royal Rumble, Ladder Matches, Triple Threat, I Quit, and so on. Frustratingly, most are littered with design flaws that should never have made it to the finished product. For example, there's no easy way to tell who everyone is controlling, which is particularly annoying when players re-enter a Royal Rumble as a different character. And then there are issues like being unable to see the suspended briefcase in the ladder matches, which makes placing the steps in the correct spot needlessly fussy. The list goes on.

The mechanics of fighting haven't been dramatically changed. Yuke's have attempted to improve reversals but it still feels mostly random. You're supposed to time a right trigger press with an on-screen prompt but it's so imprecise that most of the time you'll do just as well to button-bash.

We moaned a little about those irritations, but despite the deficiencies that evening of four-player WWE '13 ranks as one of the best sessions I've had with a game all year. If I were being generous, I'd say the problems almost enhance the fun (from a comedic perspective), but I think any defence of the gameplay would do a disservice to players wanting a well-designed wrestling game. It’s worth adding that as far as I’m concerned, the humour of WWE ‘13’s “quirks” is lost completely when trying to recreate couch multiplayer online. Unless you're sitting next to your opponent, it's not much fun. Of course, the usual customisation options are present and correct. Create-a-wrestler offers the expected wealth of options and it’s as fun as ever to let your imagination run wild. There are few changes here, but it’s still possible to lose hours and hours trying to create an authentic-looking WWE version of the early-90's Vanilla Ice (isn’t that what everyone does?).

Universe mode is back too, which allows you to simulate ongoing WWE storylines. You can compete in as many matches as you like and tweak belts, arenas and so on. But as flexible as it is, Universe remains firmly in the shadow of the main campaign.

The many negatives will no doubt be overlooked by the franchise’s core fans. As I said up top, WWE '13 has a lot in common with the sport it represents. In both, winning has little to do with the quality of the fighter. In both, events are unpredictable (and occasionally cringeworthy). Yet both have a way of drawing you in and keeping you coming back for more. A wide-eyed, ridiculous, over-the-top charm.

If you like WWE (especially the Attitude Era), if you've got some friends you can play it with, and if you can continue to endure all the issues that have plagued these games since year zero, then go ahead and buy this ugly, clunky game because you'll almost certainly love it. Otherwise, steer clear.

And that's the bottom line.

Just like its predecessors, WWE '13 is a game for the fans. It's unattractive, bug-ridden and awkward* but somehow despite (or perhaps because) of those flaws, it's a hell of a lot of fun with friends.

Attitude Era is a sure-fire winner for fans who are old enough to remember it, and the variety of game modes and creative options are enough to keep fans coming back for more.