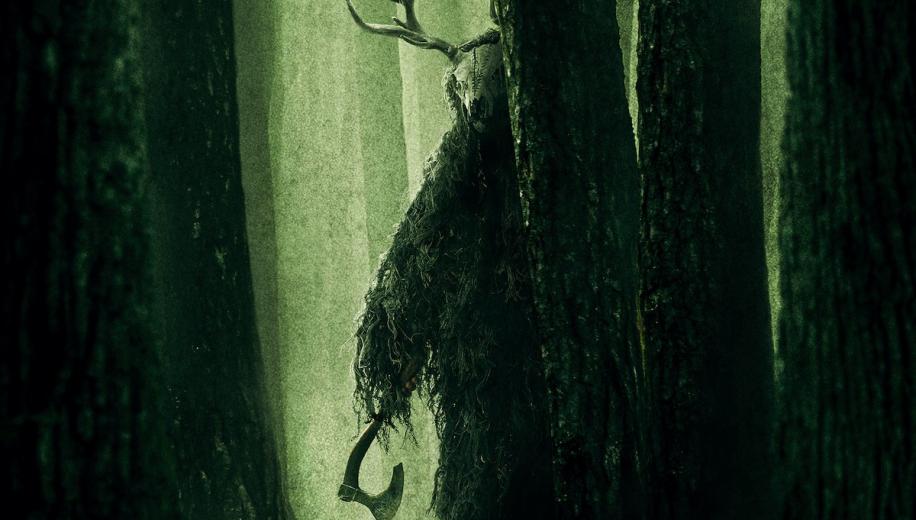 A reboot / reimagining of the 2000s horror franchise forgotten by all but the most dedicated hillbilly schlock fans, Wrong Turn seeks to right some of its past misdeeds by taking a daring hike off the well-worn path but ultimately ends up on an equally difficult track, wrong for reasons all its own.

While hiking the Appalachian Trail, six young adults take a short detour to find the site of an abandoned civil war fort. Needless to say, what they come across is less desirable (but arguably of more historical importance) as they find themselves targeted by a Nordic-inspired cult living in the mountains: The Foundation.

The Foundation itself is the movie’s secret weapon. It’s the one thing that prevents everything from falling into complete predictability. Turning away from its predecessors’ obvious The Hills Have Eyes influences, the group responsible for the traps and carnage this time around are an initially morally ambiguous group of Amish-like isolationists. They live a medieval but egalitarian lifestyle and, aside from all the killings, seem to offer a purpose and a community to those disaffected by the modern world. The group is led by the stoic Venable, a character which Bill Sage’s icy performance aids in stealing the movie. Along with his natural earthy authority, the sequences set there remain interesting by virtue of journeyman sound designer and new director Mike P. Nelson who shoots the village with some verve too, darker and more washed out than the bright greens of the Appalachian Trail as if, upon entering, the characters literally step back in time. It’s an interesting direction which, yes, we’ve seen before and better in Midsommar, Apostle, even The Village, but it makes for an interesting segment of the film before it utterly squanders everything with a terrible script and some even worse values.

an interesting direction[...] before it utterly squanders everything

Written by Alan B McElroy, writer of the original Wrong Turn (as well as Halloween 4), it’s scripted like an old white guy’s impression of what the youngs are like these days: every line spoken by the central group of six is either laughably on the nose or skin-crawlingly down-with-the-kids. The Insta obsession, the belligerence towards the locals, “he forgets that real life isn’t like Reddit,” and the unbearably mishandled and clearly tacked-on racial and sexual dynamics which have no bearing on the story, all paint a picture of a video nasty horror movie from the 80s only superficially retooled for a modern audience. All the core mechanics remain, regressive and ridiculous. So while hike leader Darius (Aiden Bradley, here giving a performance worthy of his time on The Bold and the Beautiful) might claim to be really into non-profits and activism in one breath, he’ll willingly accept a life of de facto slavery claiming to have “found his place” in the next. I could be persuaded that there’s a point there, but I don’t think I could be persuaded it’s a good one.

And that’s the real horror of Wrong Turn: the treatment of its characters. As bad or worse, is the treatment of main character Jen, played by a bewildered Charlotte Vega. As in all mass-produced teen-aimed, date-night horror, each of the characters have a flaw which makes them either easy pickings for a killer or deserving, on some level, of a bit of knocking about. Maybe one is self-centred, maybe one is derisive of the locals, maybe one’s obsessed with their phone (young people, am I right?). Well, check, check, check. And what of Jen, our heroine destined to be the final girl? Her annoying flaw is that she… doesn’t really know what career she wants. Does she use one of her two master’s degrees (students, am I right?) or does she go into work with her father, the architect (architects, am I right?)

This lack of solid direction in her life is repeatedly underlined, highlighted and even has little stars drawn around it so you know that this is her problem. This series of grisly events will give her purpose and fix her life for her. Maybe the ingrate might finally realise what an easy life she has and just nut up and go get a real job instead of just wasting her life in academia. And there are many, many moments in the film where we are clearly expected to have a flash of revelation, “Oh! She’s discovered that this is her purpose!” but the catalyst for this? Why, a choice between dying in the dark or forced breeding. That’s the tough choice that will really beat the indecisiveness out of her! It’s pretty unfavourable treatment of a female character whose only crime is not knowing her calling, even for horror, and especially for the payoff which amounts to her just being cool with all the darkness and breeding because, hey, it works, and she gets decisive! Hurray!

I guess that brings it neatly onto the denouement. The final act of the film is bitty, unsatisfying, unbelievable, gross, stupid, indecisive, insulting to its characters, and, most unforgivable, insulting to the viewer. The film essentially wraps up at the 1-hour mark and concludes as many a folk horror movie might – a shocker finale and a bleak ending for all. So far so Midsommar. However, it then proceeds to string us, for another 45 minutes, along a particularly uninspired and totally uninteresting rescue plotline, Matthew Modine, playing Jen's father, wandering around a town and the woods, aimlessly chucking in bits of unimportant exposition and dull reveals, along with a couple of cheap kills. Admittedly things pick up slightly when the fate of the remaining characters is discovered but then it quickly tumbles into a seemingly never-ending series of fake-out endings. It’s as if the writer was stuck for a climax, noted a few different options down and then proceeded to film all of them, include all of them, no matter how contradictory, idiotic or cliched they might be.

...unimportant exposition and dull reveals, along with a couple of cheap kills.

The only thing that stops the film from becoming completely worthless at this point is the way that it constantly forces you to ask important questions. Questions like “they still write movies like this?” and “why is Matthew Modine doing this? What do they have on him?” It's a quiet surprise too that, considering Mike P. Nelson's credentials, there isn't more to recommend the film's sound design which is purely practical and uninspired.

The original Wrong Turn was a flat, characterless update on The Hills Have Eyes and the script in this film at one point goes out of its way to make fun of such a stupid premise; self-aware, yet never self-aware enough to realise that this film, in some ways, is much, much worse.