Wreck-It Ralph is a frantic, hyper-active sugar rush to the head 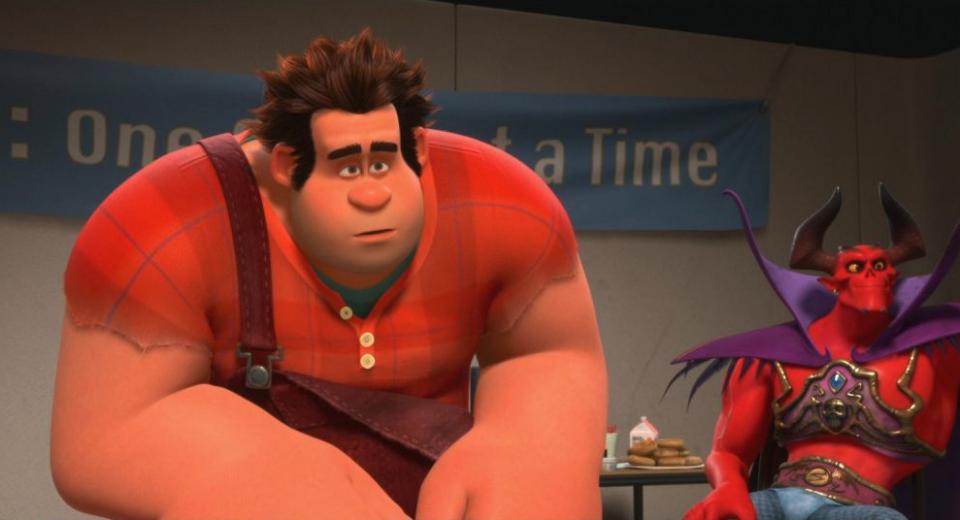 This is a jaw-droppingly colourful, eye-wateringly sharp image that's as good as it gets for 3D demo material. In fact, this 3D video presentation is right up there with the best I've ever seen, and it will undoubtedly do more by way of showing up problems with your display than you're likely to find with this faultless 1080p 2.39:1 MVC encoded disc.

First, the colours - it's like shovelling cart-loads of candy floss into your eyes. Ok, that actually sounds quite painful, and the colour palette on display here are anything but. Primary colours sing, and the entire presentation is awash with colours you could even be forgiven for thinking you've never seen them before. It's savagely colourful. Too colourful at times, perhaps?

Blacks are deep and inky, and absolutely devoid of any artifacting at all - unsurprising with digital source. Although many 3D displays, and their accessories tend to dull the image ever so slightly, there's more than enough brightly coloured scenes to make that aspect completely negligable. Anyway, I find it hard to fault a movie's video presentation because of the flaws in the playback device.

There's no evidence of ghosting to speak of, although my display did consider having a bit of a seizure during the fast paced, dark and gritty Heroes Duty scene, but again, I'm faulting my display for that, rather than the disc. There's plenty of both negative and positive paralax on offer here too, though never to the point of gratuitousness. It's magically fantastic to look at, and for me, it's equal to the very best 3D video presntations I've seen, sharing the podium with Finding Nemo (in the animated genre, of course).
All in all, full marks - you won't be disappointed.

As I expected, this awesome DTS-HD MA 5.1 audio track is absolutely dreamy, and never fails to keep your attention without being overbearing and wasteful of the surroundfield. It has subtlety, yet it's commandingly authoritative when it comes to frequency usage and dynamic range. One thing's for sure, you're going to know whether your sub is working correctly or not, with plenty in the low end to boom away, but that being said, it's important to note that the heafty LFE channel usage never gets muddy or tiring.

Dialogue is crisp, clean and perfectly understandable at all times, even if Sarah Silverman's voice does drive through me like nails on a chalkboard. The balance between the effects, ambience, dialogue and music tracks is absolutely perfect. Never once sounding like it's not in extremely capable hands.

Also, the surround array gets a good ole work out here, and this is most certainly one of those "go-to" discs for showing off your speakers. If you do want to impress someone with the quality of your system, skip to the Heros Duty scene, and wait for those Cy-Bugs to start swarming around. The detail is phenominal.

All in all, again, top marks - I can't fault the audio presentation one bit.

A pretty decent outing for additional content really, though at first glance it looks sparse. From what I can tell, pretty much everything worth watching that you get on the Ultimate Collectors edition, bar a couple of items, and the addition of a couple of DVD's. It's not overloaded, and there could have been much more 3D additional content for my liking, but what's here is decent and entertaining, without being too technical and wordy.

3D Blu-ray:
- Short Film: Paperman
An utterly charming, 8 minute long, must see animated short in which a man and a woman find themselves pulled together by fate and paper airplanes. Beautifully animated, and classy looking in it's black and white presentation, it's right up there with the best animated short's I've seen, and the 3D is beautifully stylistic and adds incredible depth to the 2D cell animation.

2D Blu-ray:
- Video Game commercials
4 minutes of rather hilarious promos for fake video games, some of which are featured in the movie, such as Heroes Duty.

- Bit by Bit: Creating the worlds of Wreck-it Ralph
Discussions from cast and crew on the making of the universe in which Ralph and Felix reside. They talk about key art and production, and how the whole design came about. At 17 minutes long, it's worth a look.

- Alternate & Deleted Scenes
Some pretty self explanatory content here but well worth taking a look at. 15 minutes of additional entertainment, with a forward by Rich Moore, the director. There's also optional commentary.

- Short Film: Paperman
As above but in 2D

Wreck-It Ralph is a frantic, hyper-active sugar rush to the head that, although it has it's moments, fails to get the balance in it's narrative right. It's desperately trying to share the podium with Pixar, but can't quite manage to get it's footing right. It's a sweet-natured yet contrived alternative take on Toy Story, only it's target demographic is actually the almost middle-aged, and less so the younger generations you might assume it's aimed at. Although a family movie that the kids will enjoy, it promises so much to the 80's and 90's gamer, but just falls short of delivering. Always colourful, at times slightly garish and overwhelming to the eyes, it's a nice and easy to digest movie that just doesn't quite live up to all it promises.

As for the Blu-ray package, it's stacked with plenty of extras, a video presentation to make your eyes water, a terrifically savage 5.1 DTS-HD Master Audio track that will give your system the full work-out it's been screaming for since you bought it, and with a nice, clean slip to boot, it's got a lot going for it. Well worth a punt if you haven't already.