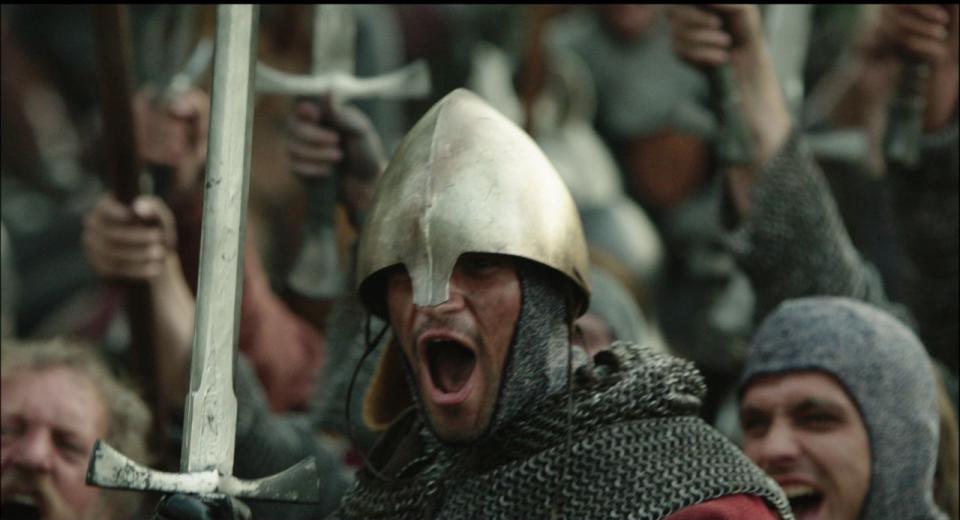 Filmed digitally in 2K on Arri Alexa cameras, the picture looks extremely good. There are issues though, with the main one being what appears to be under scan on the picture. Not only is there a small band top and bottom – about a centimetre top and bottom (not enough to be a correct 1.85:1 crop) and a visible line on either side. In other respects, the 24fps transfer is good.

The earthy tones suit the setting well and DoP Denis Crossan has done a fine job, with the moody lighting and smooth but simple camerawork. At times skin tones look a little too pink in low light and then very white in some outdoor scenes.

The budget compromises show in the lack of large establishing shots, but this is only to be expected on what is essentially a TV series. Low level detail is there in plenty, and the extra latitude that digital cameras give means nothing has burned out or is over exposed. Certainly up to the highest TV series standards and not a long way below a full blown movie release, it is only the slightly basic CGI at times coupled with the lack of many really, big scenes that belies the lower level of production. Designed for TV, it is best to think of this as a 2.1 mix rather than the full blown 5.1 DTS-HD Master stream that contains it. There is nothing wrong with the mix, but the surround track is no more than a little bit of the music track and occasional ambience. There is little in terms of spot effects to complement the more exciting moments and this could really have added to the production. Dialogue is clear and pretty much all mixed dead centre, sitting well above the music and effects.

The music is a real highlight for the movie, based upon Olde English folk and monastic choral styles, the part orchestral score is really beautiful and fits the series very well. Designed to fit the mood of the scenes, from the lilting tones of the occasional loves scenes to the thrum of the battle drums and the swell of the score as the King or his entourage arrive is spot on.

Carefully mixed to work well on simple TVs as well as full blown home cinema systems, this is not the most dynamic sound track, but at least nothing is missing. This two disc SKU is extremely simple in terms of navigation and extras. Upon insertion, the well designed menu allows one to select the episodes, languages and in the case of disc two, the making of. Looking at language support first, this is quite poor, with just an English and French soundtrack and adding Arabic and Hindi as subtitles.

The making of is a fairly standard 25 minute making of, with plenty of HD footage. A shame it has been encoded at 24FPS, leading to far too many glitches from the frame rate conversion of the original footage. In terms of interest, it is good, and includes contributions from everybody from Executive Producer Ridley Scott to many of the cast. Bearing in mind how many of them there are, this takes up most of the first half of the feature. The construction of the town and the shooting itself is also covered and this brings in the producers and designers, as well as the screenwriters and production crew. It is only a shame this was the only thing the Blu-ray producers could think of putting on the disc. A look back at the previous Pillars of the Earth series might have been just one idea. An enjoyable romp through the middle ages, slightly marred by the poor conversion from the original book and possibly concentrating more on Brother Godwyn than some may like, this is still absorbing TV and well worth watching, either on Blu-ray or on one of the catch up services.

The story may not be perfect, but the standard of the acting and general production is very high and this helps to carry things. Not easy to dip in and out of, but finding 45 minutes to watch one episode shouldn’t be too hard. Just be aware there is plenty of sex and violence, so this may not be to everyone’s taste.

Technically, this miniseries looks pretty good on the whole. Marred by a slight under scan, the rest of the picture holds up well and if you treat the sound as 2.1 instead of full blown surround, this works up to a point as well. Comparing a miniseries to a full blown movie is unfair, as the pre-production, shooting, CGI and editing can never match up to the biggest budgets, but this comes very close to gold standard.