Wands at the ready! 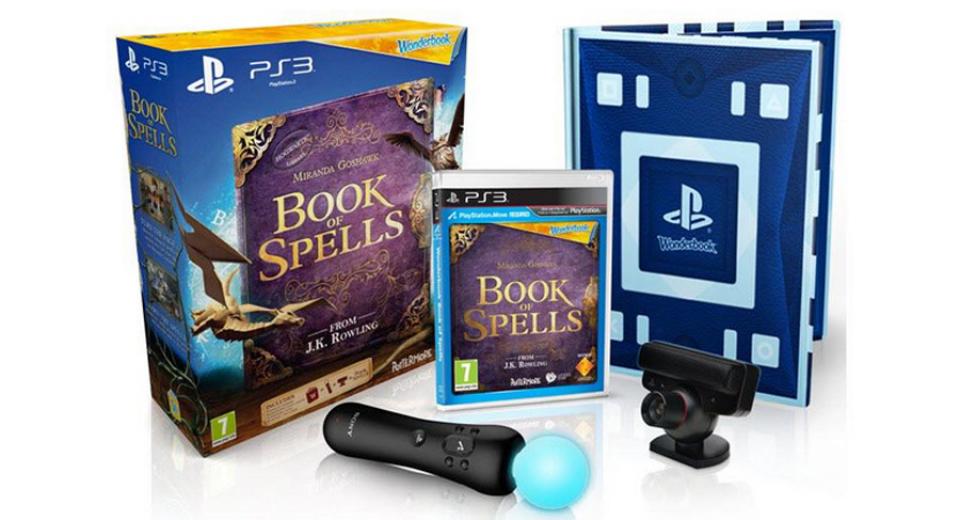 It’s getting closer and closer to Christmas which means it’s now or never for those titles to launch in order to benefit from the influx of buyers looking to satisfy their loved ones’ wish list. Similarly Microsoft and Sony release their latest gadgets and peripherals during this period as loyal customers usually purchase them no matter their quality or price.

Whilst Microsoft are being relatively quiet on that front; they have launched their latest software (which amazingly is free): SmartGlass. Sony however are not banking on console updates and cross-gadget functionality to bring them big profits this year. An updated console launch is being complemented with their latest toy, Wonderbook which is an augmented reality (AR) experience. Making use of their under-appreciated Move peripherals Wonderbook aims to bridge the gap between gaming and reality by placing users into the game world like never before. Depending on the package you pick up you receive the included game which is J.K. Rowling’s Book of Spells along with the physical ‘book’ or a Move controller and PS Eye as well as the above.

As I’ve just mentioned the bundle comes with the first game compatible with Wonderbook which is set within the world of Harry Potter and allows budding Potter fans to live and breathe some of the activities a true witch or wizard would. The actual 'book' included in the package contains several pages of codes which the PS Eye detects and builds the AR world in which you are placed. It is probably the closest some will ever come to the true Hogwarts experience as well given that the title has been developed by Sony closely with J.K. Rowling herself.

It’s immediately clear that this piece of kit has been developed predominantly for a younger audience which is most likely to be as a means of introducing them to gaming in a more interactive fashion. That by no means is a criticism of it being in existence it is just it has such a specific audience that the majority will not touch it and those that do may feel patronised by it. Book of Spells carries with it a PEGI rating of 7 which is probably about right but even for a child of that age I can’t see how they would make this experience last long enough to warrant picking up yet another peripheral. Especially when it has bizarrely launched with one title, Wonderbook could be a very short lived experience for early buyers. The whole game revolves around would-be students learning to cast new and old spells from the world of Harry Potter using their Move controller as their wand and Wonderbook as their spell book. Once the kit has been calibrated with your camera (aligning the controller and setting the book to its optimal distance) both disappear on screen and your controller takes the shape of your chosen wand whilst the book turns into a spell book.

To that end, the software works very well and the on-screen transfer from reality to augmented reality works brilliantly and tracks your movements accurrately. There is very rarely an instance where the action on screen is delayed or the wand doesn’t appear to be in your hand correctly. Similarly, Move picks up your wand movements spot on, bar the occasional niggle when you are casting a spel,l which is a massive bonus considering that is what you’ll be doing throughout the entire game. Casting spells, repeatedly.

All together there are five chapters to blast through each containing two parts with three spells to master in each. The final part of each chapter contains a test which grades you on your ability to cast and control the spells you have mastered within it. You are given house points depending on your performance in the test which serve as little more than a pat on the back. So that’s pretty much all you will do throughout, rinse and repeat until you have completed all the chapters. For anyone who has an obsession with collecting trophies let it be known that getting the platinum on this will take no more than four or five hours. If it weren’t for the fact that the whole experience depended on this formula, it could have been a lot more interesting and exciting. There is fun to be had casting spells and putting an end to rogue creatures who try to ruin your book and casting sessions. Mini games include stopping plants from attacking your book, preventing fairies from flying about on-screen or lighting darkened classrooms.

The game asks you to audibly cast the spells as well when you are learning to control them which is picked up by the microphone in the PS Eye. The only problem being that any sort of recognisable speech will be picked up and taken as the correct spell. A simple ‘reducto’ incantation can be cast by saying ‘hello’ or talking on the phone or saying something else completely irrelevant.

Wonderbook does bring some interesting mechanics to the table where you must wipe the book clean as it is covered on screen or you tilt it over in order to look down into the book through wells or holes. It is a neat little feature and does make the whole thing a lot more interactive, it’s just a shame these features are few and far between. Unfortunately there were a couple of instances where the game did freeze between chapters and pages turned for several minutes at a time. The game did eventually sort itself out but the time taken to do so leaves you with enough time to go make a drink and finish it before you start playing again.

I suppose that, given the price of the basic package that is reviewed here, for any younger Harry Potter fan out there this will give them enough entertainment to warrant its £25 price tag. But with this being the only game out there for quite some time so it would seem there will be little more to do with this than have it sit under your TV gathering dust as per your Move peripherals.

Wonderbook is a niche title and one that shows that Augmented Reality is going to be another one of those features that we may or not become accustomed to in the near future. Thankfully the AR works very well and the tracking of the wand is as accurate as you would expect it to be but all this is let down by the fact that you do the same thing over and over again throughout. Despite this being a children's game even they might become bored of the same routine for the short duration that this title actually lasts and it will hardly challenge them in any way. But for the price you pay you can't really grumble as it is probably the cheapest peripheral and game combination you will pick up for your PS3 and you may get the most enjoyment from watching someone else play this as opposed to yourself.