"Dear God, please make them be nice to him." 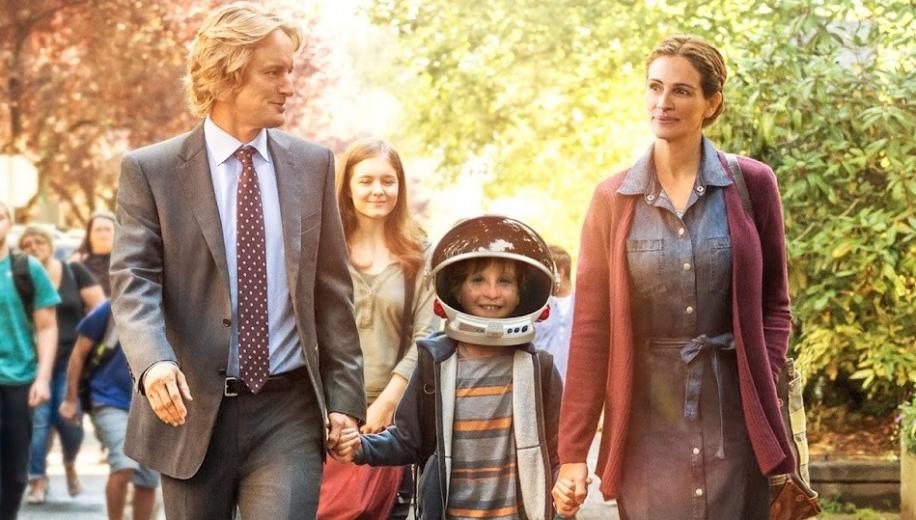 Based on the acclaimed bestseller by R.J. Palacio, director Stephen Chbowsky's Wonder is a touching and effective drama that mostly earns its sentimentality.

Dealing with the sensitive subject of a young boy's societal traumas largely resulting from his rare facial deformity, Wonder was always going to be gunning for your heartstrings, but the witty dialogue and well-structured narrative - which must have been a holdover from the multifocal narration of the book - affords the film an edge over and above its peers, justifiably earning its right to play with your emotions. The overall arcs may not ultimately eschew all predictability - this isn't a tragedy after all - but there's enough novelty in structure and authenticity in sentiment to endear you to the piece.
Whilst Palacio's handle on the characters is admirable, it is understandable that the film has received some measure of backlash over her portrayal of someone with disability, as there is a fine line between exploring the boy's isolation and social struggles and celebrating him as an inspirational hero; the controversy being that this is possibly the viewpoint that someone without a disability would have. Certainly the film benefits from young Jacob Tremblay's committed lead performance, and strong support from Owen Wilson and Julia Roberts, navigating the emotional voyage and taking you along for the ride.


Perhaps not an immediate choice for demo material, this Ultra HD Blu-ray still does a stand up job at impressing in the best ways it can.

Although notionally limited by a 2K Digital Intermediate, which leaves this something of an upscale, the video presentation of Wonder is still very effective, relying more on HDR and WCG - as will likely come as no surprise to seasoned Ultra HD Blu-ray adopters - than simple pixel numbers to distinguish itself from its 1080p Blu-ray counterpart. There is a modest uptick in detail, insomuch as is tangible when actually viewing it, although again it's likely heightened brightness and attenuated HDR and WCG likely make a big difference even in terms of clarity. The colours scheme is rich and vibrant, notwithstanding the inherent restrictions of the drama, which remains in relatively conventional everyday locations but nonetheless does its best with the lush green of foliage on trees, the redbrick buildings, the wooden interiors, blue sky and clothing and car colours. Black levels are strong and rich, lacking any signs of banding, and rounding out what is a superior video presentation over what is already a hard to fault 1080p Blu-ray rendition. Perhaps not an immediate choice for demo material, this Ultra HD Blu-ray still does a stand up job at impressing in the best ways in can.

A solid track which does the job well.

Lionsgate's UK Ultra HD Blu-ray release of Wonder sports a decent Dolby TrueHD 7.1 track which is really all the film needs, doing the best with undeniably limited material, which tends to be at its best affording viewers solid atmospherics and an engaging supporting soundtrack.

Dialogue - the most important element - gets fine prioritisation across the fronts and centre channels, remaining clear and coherent throughout, whilst effects lap up the nuances of the project, only really providing some more tangible degree of immersion during the bustling school sequences, or in the shopping mall. The score, which is peppered with some suitably emotive song tracks, gets great treatment too, remaining a key aspect to the film's aural design. It's a solid track which does the job very well but still sits below anything approaching demo.

Lionsgate, who appear to be the better than average at actually porting the extras over onto the Ultra HD Blu-ray disc itself, don't disappoint when it comes to their UK release of Wonder, making it easier for fans to enjoy the decent supplemental material.

First up is the headlining act: an Audio Commentary which sees the pairing of Director Stephen Chbowsky and the writer of the original source novel, R. J. Palacio, who are just about the best contributors you could hope for in a commentary track, dipping into the changes in the material, the emotional weight and the real-life conditions, as well as covering the usual technical aspects of production and casting. The Summer of Fun Multi-Part Documentary provides solid support too, boasting an hour of behind the scenes material split into five more easily digestible segments, taking us through the entire production from casting to filming to makeup, with soundbites from the cast and crew along the way.

A Child's Sense of Wonder spends the best part of a quarter of an hour with the child cast members, whilst What a Wonderful World spends a similar amount of time looking at the locations. The disc is rounded off by a Brand New Eyes Music Video, a brief Featurette on the Soundtrack, and some Trailers.

The film benefits from committed lead performances, navigating the emotional voyage and taking you along for the ride.

Wonder comes to UK Ultra HD Blu-ray courtesy of Lionsgate, who deliver up excellent video, very good audio and a strong selection of extra features which are kindly ported over to the actual Ultra HD Blu-ray disc itself (which makes a change). Fans should consider this a recommended release.