With a young female cast and co-op gameplay, it's a brave new world for Wolfenstein... 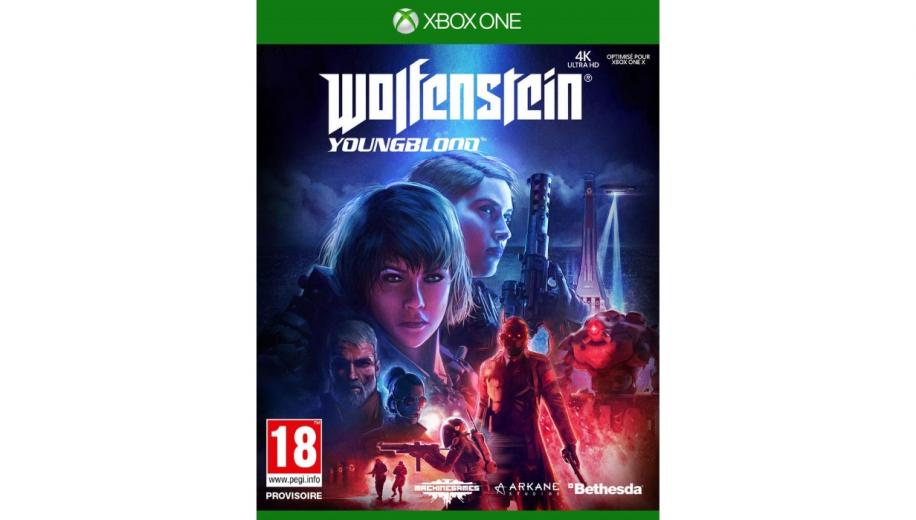 As the Wolfenstein franchise enjoys a welcome resurrection in light of The New Order and New Colossus, Youngblood presents yet another re-imagining of the Nazi-splattering gun fest. Bringing the action into the 1980s, the game sees BJ Blazkowicz's two young daughters stepping up into the lead roles when dad goes missing. Still playable and very enjoyable in single-player (with an AI sidekick), the introduction of a full co-op experience adds yet another dimension to the alternate reality Wolfenstein resides in, where Nazis rule Europe via giant mechs and robo-dogs.

We should probably start by pointing out two key facts about Wolfenstein: Youngblood. Firstly, although it is still a continuation of the core story, set some 19 years after the events of New Colossus, it is better considered a spin-off than a sequel. If you come here looking for the same BJ Blazkowicz experience, then seeing his two young daughters taking over the Nazi-killing business and the subsequent change in tone might not fit as well with your previous Wolfenstein titles.

Secondly, it’s only £25. We point this out because while we can easily highlight some limitations in the game (and we will), it worth remembering that you certainly get what you pay for. Sure, there might not be as much meat on the bones as you’ll get with some full-priced titles, but there’s certainly a whole heap of bangs for your bucks to enjoy. As part of a predominantly female cast, your first choice is to pick which sister you want to play as, Jessica or Zofia (known as Jess and Soph), but those early decisions are largely cosmetic as both will have access to the same weapons and upgrades. Perhaps the biggest choice is whether to play solo or in co-op – though we should point out that both are treated as being online, in that you can’t pause the game as the action still continues around you – so find a safe spot before hitting the menus!

Solo simply means that the game’s AI takes over the other sister and, in our experience, it does a great job. The biggest positive in single-player is that the AI anchors itself to your actions, never straying too far away from you and so letting you play at your own pace while offering some impressive and almost always reliable back-up (we were left to die on just one occasion). Neither does it become intrusive or in any way hinder the solo experience and we enjoyed having the company when we were playing on our own – plus the game has a handy knack of teleporting your sister into place whenever you need to team up to open or unlock a door.

Co-op can be done with friends or through a matchmaking system, which can be a bit hit and miss with playing partners. Youngblood uses a revival system when you’re downed, so it pays to stay close – but, as with the likes of Destiny, all too often a random playing partner will be on a speed run and it’s easy to get distanced, making revivals tricky and losing the effect of combined firepower.

But if you can get a friend or fellow gamer with a similar mind-set then co-op can be a great way to play the game, whether it’s one player holding the fort while the other loots for supplies, or teaming up to flank a Panzerhund so one player can target its weaker belly for a much easier kill. It's also worth noting that for an extra tenner you can get the Deluxe Edition of the game which has a buddy system that means you can invite anyone to join you without them having to own a copy, which can be a great way to keep a steady flow of co-op friends to play with! The revival system is based on a ‘shared lives’ system, so if both sisters are downed you lose one of (up to) three lives. Once all lives are gone and you’re downed again, you have to restart the mission – so it pays to work together and keep an eye out for any extra lives stashed around the city. There is a nice Pep Signal system that offers a cheesy line of encouragement (“I believe in you sis!”) at the reward of a health or power boost to both sisters. We quickly upgraded this so we’d be issuing full health and Soph full armour – and with a short cooldown period this proved a great way to stay alive when things got messy.

The combat is much as you’d expect from the franchise, with some gloriously brutal action that sees blood and body parts strewn across the Parisian streets and underground tunnels. The weapons and upgrades are largely familiar, with new parts and a mastery system making each tool of destruction even more potent the more you use it and level up your character. The only real game-changer comes towards the end of the campaign but there’s plenty to unlock and improve. And anyone who’s played Doom, Rage 2 or others from Bethesda’s back catalogue will be unsurprised to hear that the shotgun is an absolute beast.

Your movement can be a little clunky at times, with some jumps feeling awkward and vaulting through windows seems to happen in instalments but it’s slick enough when the guns come out. The option for stealth is there, with a cloaking ability to stay out of sight (though its use is limited) and vents and ducts offering the odd chance to avoid a fight. But it’s rarely the easy option and, as always, when the fan turns brown you need to be ready because enemies literally appear out of nowhere to quickly turn a minor skirmish into a frenetic trigger-clenching bloodbath. The biggest and perhaps most divisive difference with Youngblood is how the game is set up. Rather than being a linear story-driven corridor shooter, the game takes more of a hub-based open-world approach along similar lines to Destiny/Destiny 2. With the Paris catacombs acting as your base you are free to choose from a list of missions and side-missions as you see fit, with the Metro system acting as your fast travel system to the relevant location.

The problem is that the number of locations and the number of core missions is limited. There are barely 10 areas of the city to explore and so, after a short while, each side mission will be taking you back through similar territory (notable also by the absence of a full-scale map for each area to help plot a course). The locations are impressive, offering compact and tight areas that are great for close-quarters combat, but fighting the same enemies in the same place over and over again is a bit of a grind. There is the odd distraction with quick-quest ‘Action’ requests and some locked doors that will access new pieces of the map once later missions or the Laser/Diesel/Elektro Kraftwerk special weapons are unlocked, but you’re here for the combat rather than the view.

Each Kraftwerk weapon is tied to one of the three main campaign strands which tasks you with infiltrating three main towers in the city. These are the pick of the action and make up the bulk of the six core missions. You can tackle these right off the bat, but they’ll be ridiculously tough and you’re likely to fail. Instead, you’ll have to take on some of those side-missions to uncover secret underground entrances to reduce the risk, while also levelling up your character to become tougher and better equipped. It’s a bit of cheat to push the “most open-ended Wolfenstein experience to date” but if just want to run straight to the finish line then you can’t complain about the game being short. We certainly had a lot of fun exploring and re-exploring the city, which perhaps owes a little to the partnership with Dishonored developer Arkane Studios. Yes, it can be a bit tedious, especially as most areas repopulate quickly after you’ve been through them, but you’ll quickly learn what fights are worth taking and when you’re better off just running past it. There are loads of collectables to justify further exploration, many of them nicely tied into the Eighties vibe (3D glasses, floppy disks, cassette tapes etc.) and they’re mostly worth the effort – whether it’s to access supply crate codes or just soak up some further back story and a few subtle gags (we liked the running joke about a guy constantly setting door codes to 1234).

We also enjoyed the fresh dynamic between the two sisters. You get to see them nervous, yet determined, ahead of their first kill and taking their first steps into adulthood, drinking wine and choking on a cigarette – before quickly becoming ruthless and relentless Nazi-slaughtering badasses. The story is interesting enough without ever being as rich, detailed or immersive as the previous Wolfenstein games. Still, there are some nice moments and some decent running dialogue that never gets intrusive, while there are also some great touches that highlight their shared youthful exuberance – such as loading screens while traveling in a lift showing CCTV footage of the sisters dancing inside or goofing around with each other.

From a visual and audio perspective, the game is largely impressive (up to 4K UHD with an option for dynamic resolution to maintain a stable framerate) and the bleak, oppressive setting is in keeping with the series’ past. That said, we do think the Eighties theme could have been pushed a little more. We’re not talking full on Far Cry 3: Blood Dragon, but a bit more of that Terminator-era synth soundtrack echoing around the speakers would have been added to the immersion while some of the visual nods are a bit too subtle or hidden. Regardless, kudos to the devs for once again putting an arcade machine into your base with a couple of chapters from Wolfenstein 3D to play (or ‘Elite Hans’ as it’s known in a Nazi-ruled alternate world).

Wolfenstein: Youngblood isn’t going to be for everyone, and even some staunch Wolfy fans might be unimpressed with this change in direction. However, don’t pay too much attention to the over-reactions of the haters because this is still a heck of a lot of fun to play. The combat is as tight as you’d expect, the blood flows freely and frequently, and there’s enough variety through the weapon selection and collectable/resource hunt to keep things interesting for a long time – we hit 17 hours before we saw the credits, which is better than a lot of full-priced titles.

There’s also an ‘End Game’ of sorts, with the option to replay key missions, tackle new side-missions, undertake daily and weekly challenges, and maybe try new co-op partners on the harder difficulty levels (you can have multiple saves) where the increasing bullet sponge effect really drains your resources along with your health, making it even more important to fight smart.

All of which brings us back to those two key points. Despite the limitations and repetitiveness when compared to New Colossus, for £25 there’s plenty to enjoy, even if you are doing much the same thing over and over. There are better co-op experiences out there and there are better Wolfenstein games, but Youngblood more than holds its own as tasty side-dish and we’d be happy to see Jess and Soph return to the fight again in the future – or maybe their kids in a 21st Century spin on things?