This isn't a bright star going supernova in this new generation's infancy... 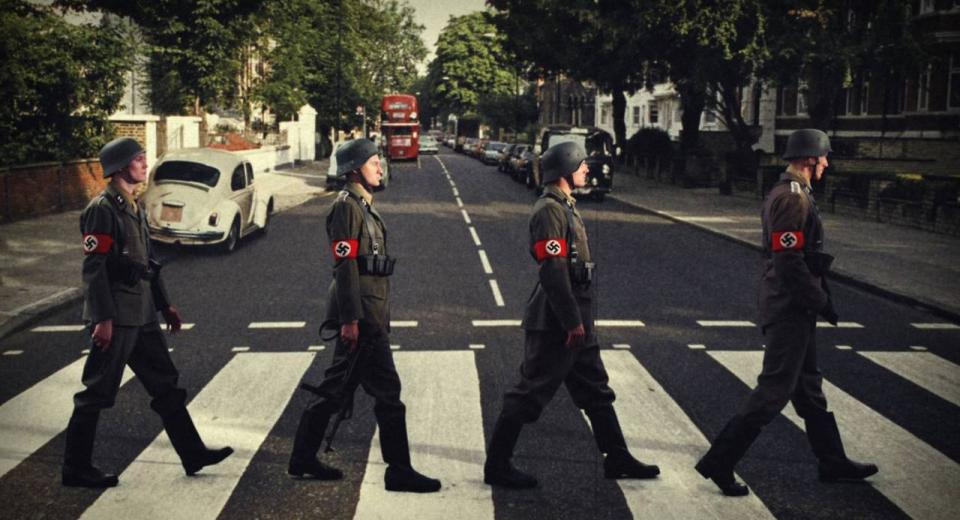 Wolfenstein, even the name sounds dangerous and old. Like it belongs to some mythical beast hiding in the shadows just waiting for the right moment to pounce and explode your head into gibs

Wolfenstein: The New Order may just have timed this attack perfectly, the new generation of consoles are currently starved of decent first person shooter campaigns with the anaemic formalities of Novembers big budget releases a distant memory. The alternate World War 2 history with a sci-fi steampunk vibe is a welcome change from the de riguer of futuritis currently plaguing the genre.

A genre Machine Games should know a little something about; having being formed by key ex-members of Starbreeze who developed The Chronicles of Riddick: Escape from Butcher Bay and The Darkness, both of which made good use of the first person perspective and reminded us that there are still things which can be enjoyed within a humble “corridor” shooter. Perhaps it’s this pedigree that gives The New Order such an air of confidence, whilst some would find the Wolfenstein name stifling (see the alternate “Black Sun” dimension from 2009’s Wolfenstein), this entry sits comfortably in its skin and embraces both the title and the genre. Good ol BIlly Blazkowicz returns as the immortal protagonist who gets injured during his day job of killing Nazi’s and after spending 14 years staring out of a hospital window; decides he should probably get back to work and finish what he started.

To do that he is going to need a few weapons, a clunky selection wheel full of weapons to be exact. A button press will return you to your last firearm but beyond that accessing the the armoury wheel can lead to a few hairy moments as you desperately search for anything with some bullets in it. There is however something refreshing about returning to the rigidity of only having only one of each weapon type; but also having the freedom to to dig any one out at a moment’s notice. Being able to dual wield almost any weapon is a nice barometer for the level of balls out fun The New Order has in store for you. Firing two Flak Cannon-esque shotguns which bounce their shrapnel around the environment while shredding anything unfortunate enough to be in your path, is just the sort of absurd fun a title like Wolfenstein should be dealing in. This is just the sort of absurd fun a title like Wolfenstein should be dealing in.

Upgrades come thick and fast, with new toys frequently improving your hardware and new perks supporting your play style. If you like sneaking around using Nazi’s as targets for your throwing knives you will undoubtedly progress down the stealth branch of the upgrade tree while those with a more “direct” play style will find themselves running down the tactical path.

There are certainly plenty of encounters for you experiment with all the options in; the lengthy campaign is paced surprisingly well. taking you from peering down sights round in tight corridors out into open playgrounds. You are frequently given the option to fall back on some light stealth mechanics, using a silenced pistol or the occasional throwing knife to take out all the unsuspecting officers before they can raise the alarms, flood the level with backup and force you to go all Rambo on the situation.

The old school gameplay elements are a welcome throwback, med packs, ammo pickups and armour are all present and accounted for. Your health will regenerate to a certain extent and eventually you gain weapons which can also be recharged; but clearing out the enemies and then stocking up on weapons and armour from your victims is a necessary and fun bookend to the combat encounters. The old school gameplay elements are a welcome throwback

More than meets the eye

There are several difficulty levels which range from “CAN I PLAY DADDY” with smatterings of weak opponents with almost no will to live or knowledge of cover, to “UBER” with its groups of various enemy types who aggressively advance on your position. Playing through on the “I AM DEATH INCARNATE” level provided a welcome challenge which required more than just taking routine pot shot’s from cover.

A variety of enemies will require different approaches, most will fall from your standard assault rifle burst, however armoured shotgunners and rocketeers will need some heavier artillery to get the job done. You have a super weapon which will comically explode anything which isn’t a Mech but it has a limited capacity before needing to be recharged. On harder difficulties this forces you to give up cover to move around the level to find a recharge and save those shots for the bigger enemies that matter.

There are some more serene moments where character development is coupled with some non combat objectives in between missions at your home base. These proved to be the most surprising part of the experience. The plot does its job as a narrative vehicle; transporting you between shooting galleries, but the merry band of characters you acquire throughout make it a much more enjoyable ride, with some good performances ranging from tongue in cheek delivery to genuinely tender moments. On the other side of your rifle there are some truly twisted (both physically and philosophically) characters presenting some of the most chilling moments throughout. Machine Games have managed to strike an excellent balance between the over the top gore and violence we expect from the series and tempered it with an entertaining set of characters. The merry band of characters you acquire throughout make it a much more enjoyable ride
The 15-20 hour campaign in itself is a substantial slice of game, and without the anchor of multiplayer holding them down, there are some greater hooks for re playability. An early choice branches off into two “timelines” where elements of the the game will be different with different paths through levels and small game play changes adding a slightly more compelling reason than usual to replay the story.

Along the way you'll be presented with plenty of story side dishes, newspaper clippings, records and letters that paint a deep picture of the Nazi dominated history, real world events and figures have been twisted into the alternate history with some real thought. At some point it can begin to feel like an endless scavenger hunt with ammo, armour and collectibles scattered in every direction but the rich content makes it more than worth your time

Wolfenstein: The New Order isn't a bright star going supernova in this new generations infancy, rather it's a steady slow burner that has appeared in the darkness of the night sky. Graphically it's not a head turner; no doubt held back by its last generation counterpart and in game play terms it is as familiar as its title would suggest.

With those expectations set it's clear Machine Games concentrated on providing as much of a standard quality shooter as they could muster, with a lengthy campaign featuring an excellent cast and comic book levels of gore. Despite none of these elements elevating the game beyond what it says on tin, it's still just the sort of game hungry new console owners will be happy to get stuck into and they will certainly find it hard to come away dis-satisfied.