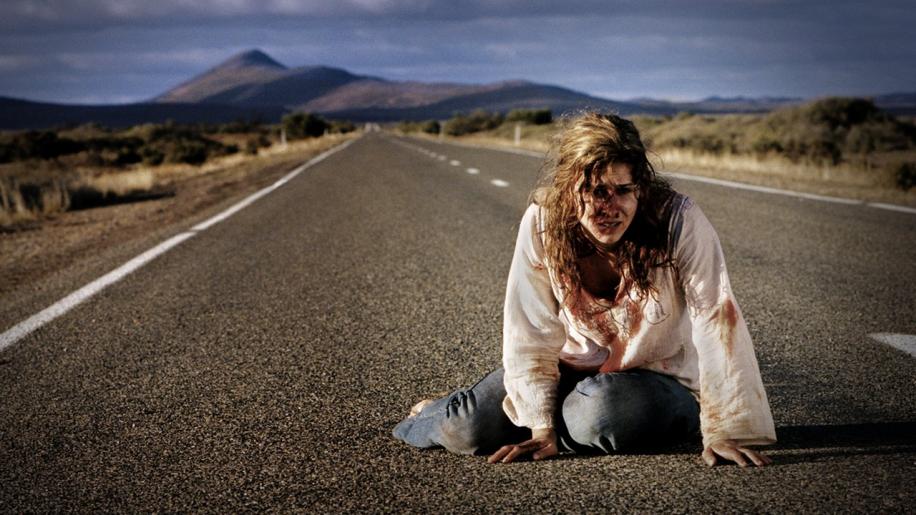 Presented in an anamorphic 1.85:1 transfer, the results here are mighty fine. There is an impressive depth and quality to the picture, which proves equally adept at coping with both the bleached out sun of the Australian outback and the encompassing darkness of the movies night scenes. Colours are rich and vibrant, skin tones uniformly even, and blacks are impressively solid and full. Detail is clear and consistent on the whole, and viewing is clear even in the darkest of shots. McLean shot the movie in Hi-Def, and the transfer works well to give the film an authentic rough 'n ready appearance conveying a gritty almost grindhouse feel to events in keeping with its obvious seventies influences. Digital artefacts are kept to an absolute minimum with virtually none in the movies later stages, and no glaring edge enhancements pop up. This is a splendid film visually, and I'm happy to report the transfer does it justice. 'Wolf Creek' comes to DVD with a solid and impressive Dolby Digital 5.1 mix. The track creates a wonderful sinister ambiance throughout, with deep ominous contributions from the LFE channel, and the surrounds brought to full use to project the sinister discordant soundtrack. Dialogue is clear throughout with strong representation from the front and centre. The nature of the effect means that this isn't necessarily a textbook mix: separation and clarity are occasionally sacrificed for an echoey ethereal cacophony where everything seems to come together in one unnerving whole. It's certainly very effective, and perfect for the seclusion and horror the film attempts to convey. If I was to be picky, a little less isolated ambiance and a bit more consistent gusto from the rears may have perked up the soundtrack in parts, but overall this is a very effective audio contribution. Disc one of this two disc set holds the theatrical trailer for the film and also a feature commentary from writer/director Greg McLean, co-producer/executive producer Matt Hearn, and the two leading actresses Cassandra Magrath and Kestie Morassi. As commentaries go, this is pretty engaging without ever becoming essential listening. The bulk of the interesting information comes from McLean and Hearn, with little more than light anecdotal information from the two ladies. Disc two holds the bulk of the features, with pride of place going to a 50minute behind-the-scenes documentary 'The Making of Wolf Creek'. This is an interesting and reasonable exhaustive account of the creation of the film, following it from casting to shooting and through to post-production work, and featuring extensive interviews with cast and crew. Following this is a lengthy interview with John Jarratt about his role in the movie. Although initially interesting, allowing the guy to essentially freewheel unguided for the best part of half an hour means that only Jarrett aficionados may survive the full length. It is however entertaining to hear how he went the whole hog on the character, even inventing an elaborate back-story for mad Mick. Bless him. Three deleted scenes are included, two are basically padding, and one of which is of decent length running at nearly four minutes, presumable exercised for pacing purposes. Rounding off the set is a teaser trailer for the movie, as well as two trailers and a clip exclusive for other films from Optimum's stock. A welcome throwback to a time when horror movies weren't all anodyne PG-13 fare,
this should entertain the ardent horror fan despite its lack of originality and circumspect pacing issues. A very promising start for Greg McLean.