Without A Paddle (R2) DVD Review 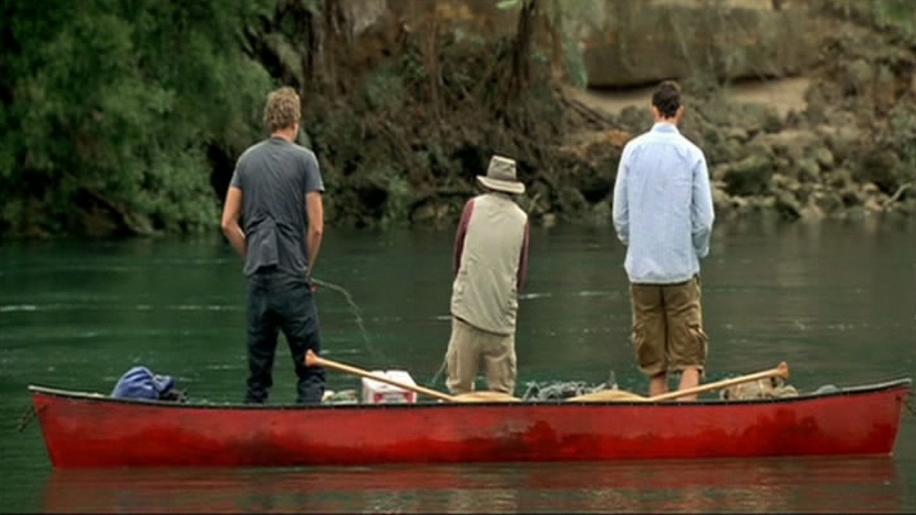 For a very recently released movie, I'd expect nothing but a good print and that is exactly what we have here. The print used was clean with only occasional specks of dirt and I do mean very occasional. Colours are bright and vivid, flesh tones are natural, with deep and dark blacks and detail is generally kept high. The transfer doesn't suffer from any grain and colour bleed only happened occasionally on some vivid reds, but was minimal. Edge enhancement wasn't noticeable and only slight halos were present, but not overly distracting from what was happening on screen. Not bad overall.

The soundtrack, presented in Dolby Digital 5.1 was quite nice. As a comedy, it's unusual for the soundtrack to be engaging, but when the hillbilly characters open fire, the surrounds get a nice work out with bullets whizzing past your head. LFE wasn't utilised very well and was hardly noticeable in all honesty (except at one point at the end). Even at moments I thought it was going to be used, I placed my hand to check the speaker and felt nothing, which was a shame. However, the opening music is really nice and clean with superb separation and for the most part the soundtrack continued in this vein. Dialogue was clean and crisp and was not drowned out during the louder moments of the soundtrack (such as the shooting scenes), but was more a 5.0 than 5.1, hence the score. Mind you, can't knock a movie that has a Joey Ramone song on the soundtrack.

This movie features two commentary tracks, one with the Director, Steven Brill and the other, in theory more entertaining one is a video commentary featuring the Director, Dax Shepard, Seth Green and Matthew Lillard. Only problem is that it gets really stale, really quick. I don't normally listen to commentary tracks, but I thought I'd give this a try and stopped it after 22 minutes due to it being tiresome. Still some people may enjoy it, but I'm not one sadly. MTV's Making The Movie is a very typical MTV type feature and if you've seen one before, you know exactly what I mean. It runs for 18 minutes and gives you a semi-interesting look behind the scenes, but is nothing really more than a typical promo piece. Its saving grace, for me, was the footage of the bear and his trainer. Additional scenes runs for a total of 23 minutes and each scene can be played on its own, or you can view them individually and are with optional Directors commentary. Nothing particularly outstanding here and easy to see why they were removed from the movie. Finally, we have the trailer and TV Spots (called MTV Interstitials) which are exactly what they say on the tin.

Well it's amusing in parts but kind of tired too. We've seen it done before in other films like Road Trip, but this has a better cast, so it's slightly more likeable. The major criticism I have is that it's very tried and tested and therefore is just another dumb teen comedy to me. If however, dumb teen movies are your thing, you'll probably like this, but if not, look elsewhere.