Without A Paddle DVD Review 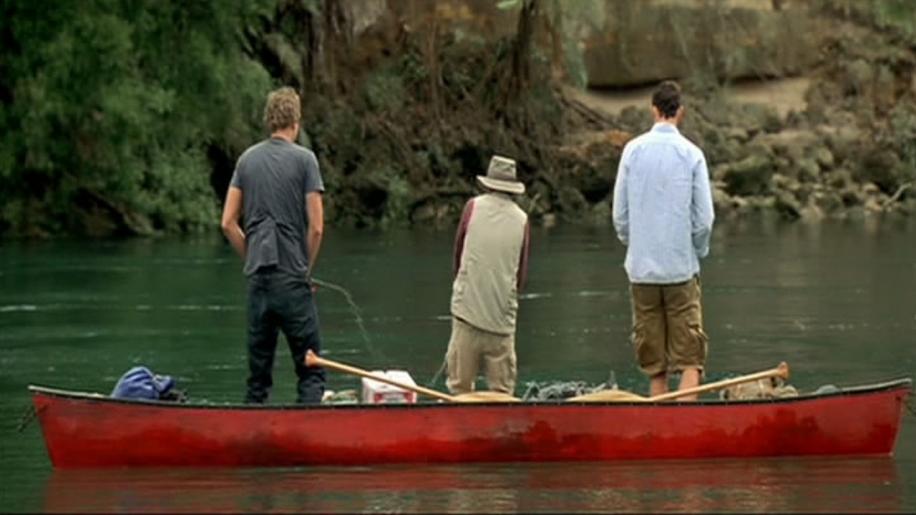 The picture on this transfer was spot on. There were some great scenery shots in this movie, which really benefited from the clarity that the DVD format offers. Scenes of the river rapids and the panoramic shots of the countryside were all delivered with pinpoint sharpness and natural colour. There was no compression artefacts present at all that I could detect although there were a couple of close up scenes that appeared a little soft (maybe even intentionally). All in all, the picture could not be faulted and is what we expect from a new movie transfer.

When it needed to, the Dolby 5.1 surround track did a great job in aiding the visuals by immersing the listener in the movie. Whilst this could not be described as an out an out 'action' comedy, it did have a number of scenes that were greatly enhanced by sound steering. The scene where the boys get hurled down the river rapids produced some great sound steering effects giving the impression of rushing water all around you. Likewise when the smugglers were chasing the boys the sound of bullets whistling past your ears was very effective.

Generally the sound and vocals were delivered very crisp and the surround track did a fine job for a movie that did not necessarily require enhanced sound steering through many of the scenes.

Interestingly this is the first disc I have seen with a 'video' commentary, which I thought was a novel spin on the commentary track. When the main feature is playing, every now and then, up pops a window with the director, Steven Brill and the three main lead actors who then talk about the scene and the fun that they had shooting. There is also a separate audio commentary with just the director.

The usual bevy of deleted scenes is included with an optional commentary track detailing why the scenes were cut. An MTV 'Making The Movie' feature is included. I have to say I am a bit of a fan of this extra on a DVD. I do like to have an insight in to 'what went on' behind the scenes in order to create the movie. This is ok but does not go into too much detail about the filming techniques but does provide some interesting input from the cast and crew.There are also 6 MTV Interstitials. Why they call them interstitials I have no idea! Trying to be clever and different I think. To anyone who is remotely interested interstitials are another name for a trailer (like you couldn't have guessed) and are, by definition, something that is used before the main content / feature to advertise the final product. Well at least you have learned something from this review!

For this kind of movie, the extras are pretty good. It's nice to see an effort made to provide the buying public with a bit more extra than the usual helping of one audio commentary.

I can only give this DVD a rating of 5. It may have great picture quality, a cracking surround sound track and some good extras included but unfortunately that doesn't make the movie good and warrant it being an addition to your DVD collection. Whilst I am sure some of you will disagree with me, (and I am sure you will if you are under 10 years of age as this film may better appeal to you) I can only reiterate how disappointing this film was.With better character development, a script that followed direction, a competent storyline and comedy that was less centred around the juvenile then I am sure this could have been a hell of a lot better.