Not your typical launch title 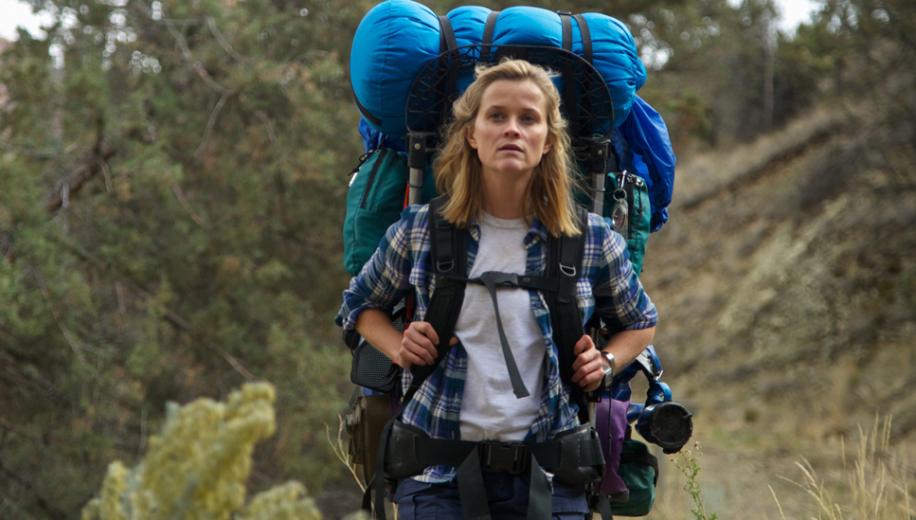 Wild tells the remarkable story of Cheryl Strayed, a troubled young woman who walked over 1,100 miles in order to discover herself.

The film is directed by Jean-Marc Vallée, who made the equally superb Dallas Buyers Club, and it's another powerful story built around a strong central performance. This is very much Reese Witherspoon's film and she delivers a heartfelt and deliberately unglamorous performance. Since Witherspoon is playing Cheryl she is on-screen for almost the entire film and she does bear a striking resemblance to the real person. In fact it's only at the end when the credits roll over actual photos of Strayed's journey that you realise just how accurately the filmmakers recreated everything. The film definitely benefits from being shot on the actual locations along America's Pacific Crest Trail (PCT).
Vallée has a great ability to capture an almost documentary feel in his films and Wild is no exception. There's a genuine sense of realism and the unsentimental narrative does an excellent job of telling Strayed's backstory as we follow her progress on the trail. She is a troubled young woman who falls into drugs, casual sex and self-loathing after a tragedy. Her solo hike along the length of the PCT is her way of dealing with her past behaviour, her relationship with her mother (played in flashbacks by Laura Dern) and her grief. Ultimately it's a journey of redemption; as she learns to love herself again, helped by the beauty around her and the people she meets along the way. Wild was filmed digitally using the Arri Alexa XT camera at a resolution of 2.8K and was finished using a 2K Digital Intermediate (DI), which presumably formed the basis for this Ultra HD Blu-ray release. The film was upscaled to 3840 x 2160p and presented in its correct 2.40:1 aspect ratio, the disc uses 10-bit video depth, a Wider Colour Gamut (WCG) and High Dynamic Range (HDR), and is encoded using the HEVC (H.265) codec. We reviewed the region free US Ultra HD Blu-ray release of Wild on a Samsung UE65KS9500 Ultra HD 4K TV with a Samsung UBD-K8500 Ultra HD Blu-ray player, although the film has yet to be released on the format in the UK.

Wild seems like a strange choice for a launch title on a new 4K format but we should probably be grateful that the studios are prepared to release a small scale drama on Ultra HD Blu-ray at all, as opposed to a constant diet of big budget action and sci-fi movies. The film itself was shot digitally and in a very low-key style using natural light, so there seems little for the format to add, especially as it was filmed and graded at a resolution of 2K. This means that in direct comparisons with the regular Blu-ray, there is no actual increase in resolution, the two discs are identical in this respect. So is there no benefit to watching the Ultra HD version over the regular Blu-ray equivalent or can the new format still add value?

The answer to that is yes, thanks to the other aspects of the Ultra HD disc format. The 10-bit video depth means that the colour gradations are improved, although we did see some very minor banding on occasion. The wider colour gamut also offers slightly more realistic colours, which definitely benefits many of the landscape shots and the location filming. The woods, rivers and snow-capped mountains that Cheryl Strayed encounters along her journey are certainly brought vividly to life in the new transfer.

However it's the addition of HDR that has the biggest impact, giving many of the location shots a greater sense of realism. When comparing the Ultra HD Blu-ray to the regular Blu-ray, the wider dynamic range gives shots better definition that makes them initially appear more detailed. However when you look closer you can see that the actual detail is the same, is just that the HDR makes the images appear clearer and sharper. The HDR also gives images greater impact, so sun light shining through a hole in a tent really looks like sunlight. There is greater detail in the brighter parts of the image but also more added detail in the nighttime scenes.

Since the film was largely shot using natural light, the use of HDR really helps to retain shadow details in the night scenes; the same sequences on the Blu-ray appear crushed by comparison. If there's one area of complaint it's that the HDR does exaggerate the artificial grain that has been added to the image by the filmmakers to emphasise their handheld documentary approach. Some people might find this somewhat distracting, although it will depend on the size of your screen and your seating distance. Overall Wild is one of the less impressive Ultra HD Blu-ray releases to date but the HDR transfer still makes for a superior viewing experience, adding to the drama of the film. The Ultra HD Blu-ray has the same DTS-HD Master Audio 5.1-channel soundtrack that is included on the regular Blu-ray. Wild used a 5.1-channel Dolby Digital soundtrack on its theatrical release and is hardly the kind of film that would need an immersive audio soundtrack like Dolby Atmos. The existing soundtrack perfectly captures the mood of the film, switching between the gentle sounds of nature and the jarring audio effects of the flashbacks, all accompanied by an acoustic score.

It's not a flashy soundtrack, primarily composed of dialogue that is centred on the screen, whilst the score is spread across the front three channels. The effects are primarily used to create a sense of atmosphere but they remain subtle, rarely drawing attention to themselves. As you would probably expect this isn't the kind of soundtrack that needs a dominant LFE track but there are still instances of bass energy, usually related to the musical score but also during a thunderstorm. It's largely a workman-like soundtrack but it achieves its goal of drawing the viewer into Cheryl's journey both internal and external.

The US Ultra HD Blu-ray release of Wild comes in a black Amaray case with two discs, the Ultra HD Blu-ray and the Full HD Blu-ray. The Ultra HD Blu-ray doesn't use regional coding but interestingly, even though the packaging says that the regular Blu-ray is Region A, it actually plays in Region B players without any problems at all. The package also includes a digital HD copy of the film, although you probably won't be able to redeem the code in this country.

All the extras are in HD and, with the exception of the commentary track, are included on the regular Blu-ray. There is a reasonable selection of :

Commentary – This feature appears on both the Ultra HD Blu-ray and the regular Blu-ray. This audio commentary from the film's director Jean-Marc Vallée and producers Bruna Papandrea and David Greenbaum covers the production of Wild but does tend to focus on the challenges of making the film on the real locations. However it's an informative and largely interesting commentary about the difficulties of shooting on location.

Deleted Scenes (07:49) – A series of deleted scenes and scene extensions that appear to have mainly been cut for pacing.

The Real Cheryl Strayed (08:37) – This is an interview with Cheryl Strayed herself, although the featurette also includes interviews with star Reese Witherspoon and director Jean-March Vallée. As with the majority of the featurettes on the disc, it feels a bit too promotional to be genuinely informative.

The Real Location is the Best (08:45) – As the title might suggest, this featurette focuses on the difficulties of shooting on the actual Pacific Crest Trail.

How much does a Monster Weigh? (03:46) – This is featurette deals with Cheryl's massive backpack that earn the nickname 'monster' and shows all of the items she carried with her and how much it weighed.

The Pacific Crest Trail Interactive Map – This map shows the PCT with key moments from the film highlighted, which the viewer can click on to jump directly to that point in the movie.

Experiencing the PCT: A Special Message from Cheryl Strayed (01:47) – This is a public service announcement in which Strayed speaks about the beauty of the PCT and acknowledges the men and women who work to maintain the trail.

Gallery – A series of stills from the film and its production.

Promotional Featurettes – A series of featurettes that were originally created to promote the film, so they are fairly general in their approach and some of the interview footage gets repeated. However it's interesting to see Nick Hornby talking about how he adapted Cheryl Strayed's original non-fiction account of her journey. The featurettes are: Bringing the Book into the Wild (03:35), Reese Witherspoon in the Wild (03:55), Wild: 94 Days, 1,100 Miles (03:18), Directing Wild (03:56), Making Wild (05:21), Pacific Crest Trail (04:07) and Real Locations (03:21). Wild is an enjoyable and entertaining film that manages to tell the story of Cheryl Strayed's journey of self-discovery without being sentimental or moralising. The film features a great script by author Nick Hornby, who does an excellent job of adapting the original non-fiction source, and a marvellous central performance from Reese Witherspoon. The rest of the cast are equally as committed, especially Laura Dern as Strayed's mother, and Jean-Marc Vallée's direction gives the film a documentary feel. The symbolism can be a little obvious at times but in the end the film succeeds in telling Strayed's story without resorting to emotional manipulation and comes highly recommended.

Although the film itself may seem a strange choice for an Ultra HD Blu-ray launch title, the addition of HDR does result in a superior visual experience. The resolution is essentially the same as the regular Blu-ray but the combination of 10-bit video, a wider colour gamut and higher dynamic range results in a more defined image. The artificial grain is exaggerated by the HDR but otherwise the image delivers a nice sense of realism. The Ultra HD Blu-ray uses the same DTS-HD Master Audio 5.1 soundtrack as the regular Blu-ray, which is effective without drawing attention to itself. A reasonable set of extras round off a decent package that is good, even if Wild will never be demo material.