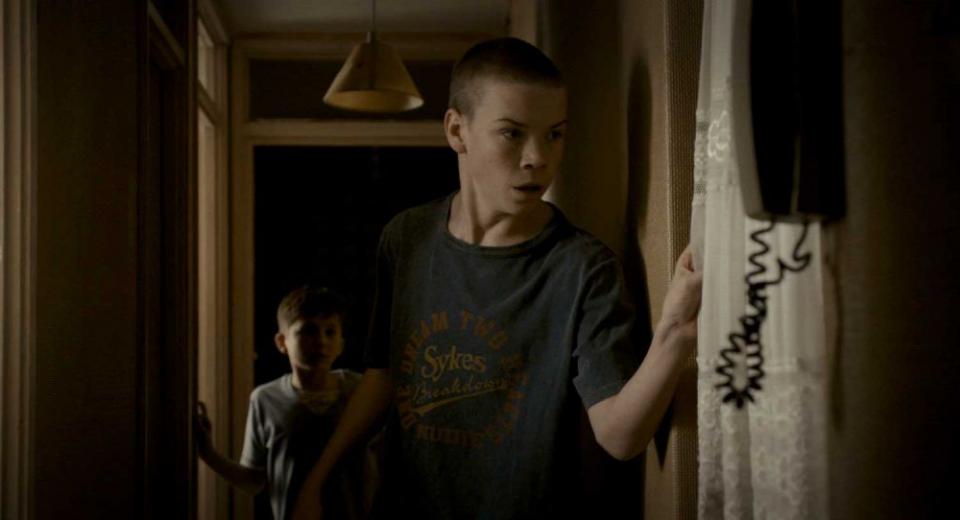 Wild Bill comes to the UK region B locked and is presented with a 2.35:1 aspect with a 1080p AVC encode. It's not uncommon with modern Blu-rays to expect a high standard of visual quality, and although Wild Bill is not disappointing per se, it's definitely slightly underwhelming. Generally on the slightly dark side, even in bright daylight outside scenes, it feels dull and gloomy, offering no respite from the grim urban East London setting.

As far as colour, it varies from everything being very desaturated, to everything being heavily treated – some scenes even look almost sepia, particularly noticeable during night time scenes around the estate with the street lighting. A strange choice to let this go if I'm honest, as it definitely brings a feeling of disconnect between scenes. When things aren't being generally washed and unbalanced, there's a heavy leaning towards oranges and yellows. There's nothing horrible here, but it does feel like grading and colour wasn't in the most experienced of hands, and there's definitely a sense of erring on the Guy Ritchie blue-print for colour schemes, just not quite as original.

Blacks feel crushed, and can have a tendency to feel slightly on the green end of the spectrum – this is also apparent in areas of shadow. Contrast is heavy handed and if I'm honest flattens the image quite considerably, which is a shame as some of the backdrops really do have a sense of scale to them and night scenes around the estate lose the crispness that a slightly more deft hand with contrast could have brought out. Shadow detail suffers from the overall grading, contrast and colour choices, combined with a hazy and smokey atmosphere in a lot of indoor scenes.

Skin tones are flat and washed out, again a result of the orange and brown grading, coupled with the desaturated palette. Detail is decent though, and there's no signs of DNR or edge enhancement. It wouldn't need it, as the image, bar colour and brightness, is sharp and crisp. Clothing textures look decent, and there's detail enough to go round. Overall, bar some questionable choices in colour, and a lack of a more delicate touch on grading, not a bad visual presentation.

The DTS-HD Master Audio 5.1 presentation is pretty solid. Dialogue is crisp and clear, and never gets smothered. The ambiences are subtle and well constructed, though I felt there could have been more made of the construction site being in the heart of London during indoor scenes at the high rise, especially considering the site is visible from the flat. A minor point though. Foley is pretty much all recorded on set, which is refreshing to hear, and lends movement a sense of authenticity. Small movements have a crystal clear level of detail that I love to hear. So easy to miss, but if you listen out for it, there's a depth, clarity and believability given to a scene with this approach.

Not much by way of surround, bar the buffing out of ambiences and the occasional kerfuffle enhancement

Soundtrack is somewhat muted at times, leaning more towards licensed tracks than bespoke composition which is very subtle and broody. Christian Henson has done a good job with what was asked of him, and it stands up well to the plethora of licensed reggae and funk tracks.

Overall, a decent audio presentation. It's not by any means stretching the capabilities of sound, but it holds its own well and offers the movie the believability it deserves.

Mediocre offerings in the extras department, but with a spate recently of movies entirely devoid of any extras, it's encouraging to see something of substance here.

Deleted Scenes and Extended Scenes – Not a lot by way of deleted material, bar a few additional bits with Andy Serkis - mostly just extended versions of scenes from the film, and add little to nothing to the movie. 12 minutes in total, but it's excessively irritating that all swearing has been bleeped in these scenes.

Making Of – A 30 minute featurette that covers behind the scenes, cast and crew interviews, with an extensive chat with Dexter Fletcher. Interesting at times, but the interview with Fletcher has terrible echoey sound.

Favourite Films – A minute and a half of fast cut cast offering their favourite movies.

Whilst I approached Wild Bill with a degree of apprehension, I was pleasantly surprised with what I got. It's a very heartfelt observation of a broken East London family rebuilding itself, set against the backdrop of the Olympic Stadium. Metaphorically strong, morally upright, and at times sharp and funny, it follows Bill's rediscovery of family, and how important it can be. With a solid cast, and a good screenplay, long time professional, first time director Dexter Fletcher does a good job of pulling together a tale told with nods to Guy Ritchie and the Spaghetti Western genre.

The Blu-ray package is presented with a decent, if at times questionable visual presentation, and a clear and solid audio track with some lovely touches in the small details. This makes for a happy addition to my collection, and is certainly one that I shall revisit at some point in the not too distant future.